As I mentioned in my earlier blog, phishing is a never-ending threat for web security. Another threat for web users is the rise in the ActiveX vulnerabilities. These are very easy to exploit as there is a great deal of information available including vulnerability details, proof-of-concept exploits, etc. freely available on the Internet. ActiveX controls can be automatically downloaded and executed by Internet Explorer (with user acceptance) when viewing a web page or installed as part of a larger application. Basically, ActiveX controls have various properties and methods, which can lead to exploitation if they have not been properly coded. If someone were to find a vulnerable property or method in an ActiveX control, it is not be difficult to create a working exploit and host it on a web server. If the vulnerable control is marked ‘safe for scripting’ it can then be remotely called and exploited by a malicious web site.

Numerous buffer overflows and file overwrite vulnerabilities have been found in ActiveX controls over the past few years and working exploits are available for many of them. Using a heap spray technique, which is a popular method for reliably injecting shell code into memory, the vulnerable control can be successfully exploited by the attacker. He simply needs to host the working exploit somewhere on a web server under his control and divert a victim to visit the site. If the vulnerable ActiveX control is present on the victim’s machine, the victim will be compromised silently in the background and the vulnerability could allow remote code execution or arbitrary file overwrite. The attacker could then download and install additional malware or malicious programs.

A few months back, a vulnerability was found in Snapshot Viewer for Microsoft Access (MS08-041) that can be leveraged to download and save files to arbitrary locations on an affected system. As noted in a Symantec blog post, because this particular ActiveX control was signed by Microsoft, attackers were able to force installation/exploitation of the control without any user interaction. Web attacking toolkits like Mpack, Neospolit, etc. found in the wild are exploiting a number of such critical ActiveX vulnerabilities.

Due to the ease of exploitation with vulnerable ActiveX controls, attackers are widely using them as a popular attack vector. Heap spray code is very easy to work with and can be seen in many attacks involving ActiveX exploits. This gives the attacker the power to easily change the shellcode to whatever is required. He can then host the exploit code on the webpage and convince victims to visit the Web site, typically by getting them to click a link in an HTML e-mail link. ActiveX vulnerabilities are rising every day and people are posting exploit code on public web sites. A quick search on Securityfocus will reveal the latest ActiveX vulnerabilities as shown below: 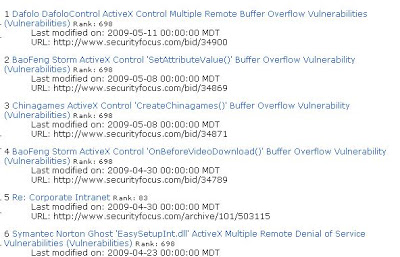 Gone are the days when attackers were targeting server side vulnerabilities to compromise systems. Now, they are focused on targeting end users, via the web browser. A combination of heap spray and obfuscation used in the exploits makes it difficult to detect the attacks using automated means. Certainly, the rise in the use of ActiveX vulnerabilities and exploits posted on the web makes them a real threat for web security. Setting up a kill bit is the only option if the vulnerability is not patched and you do not have updated antivirus signatures. The Kill-Bit is a registry key for a particular CLSID that marks the COM object / ActiveX control referenced by that CLSID as non-loadable in the browser and other scriptable environments. Setting a Kill-Bit for the control marks that particular control as forbidden to instantiate in the browser. You can do this by modifying the data value of the Compatibility Flags DWORD value for the CLSID of the ActiveX control. Here is the link from Microsoft on how to set a kill bit for a given control: