Public cloud has made possible previously unheard of scale, performance, and agility for enterprises of all sizes. Development teams are getting new products and applications to production faster than ever before, accelerating digital transformation within their organizations. But cloud adoption hasn’t been without its speed bumps, not the least of which is security. Cloud vendors have dedicated enormous security resources to their platforms, yet barely a day goes by without news of another cloud security incident. Most of these incidents can be traced back to insecure use of cloud services rather than to security flaws in the services themselves.

In this post, we’ll talk about the findings at a high level. Future posts will dive deeper into cloud-based attacks observed by the ThreatLabZ team, the risk of certain types of cloud misconfigurations, and the appropriate mitigations to put into place to protect against security incidents.

The split of responsibilities varies based on the type of cloud service being used. In a SaaS application, such as M365 or Salesforce, the cloud vendor is responsible for the entirety of the application’s security, from the physical security through the operating system(s) and the application itself.

In an IaaS platform deployment, however, the customer is responsible for quite a bit more of the security and configuration of the services. Often, this includes the application code and even the operating system.

In all cases, it is the enterprise’s responsibility to ensure that its data is properly protected, whether it lives in an enterprise data center or in a public cloud environment.

Upon reviewing the data, we found that a broad range of widely reported security issues are still not adequately mitigated in most environments. Key areas of deficiencies include:

Lack of logging and monitoring

In a typical cloud environment, gigabytes (GBs) of data are moving in and out all the time. To fully understand what’s going on in your cloud environment you’ll need a robust logging and monitoring system in place.

For example, AWS CloudTrail is a logging service that gathers information about API calls, actions and changes within your AWS environment. CloudTrail logs contain critical information for audits and intrusion response. CloudTrail is enabled by default, and it logs all activities and events for 90 days. If you need more than 90 days, you’ll have to configure CloudTrail to deliver those events to an Amazon S3 bucket.

In case of a compromise, logs are often the first source of information. They are a crucial part of incident response.

Access keys and credentials are usually the first target for adversaries. With these in hand, it doesn’t matter which security policies or firewall rules are in place — the attacker has access to the entire cloud account. 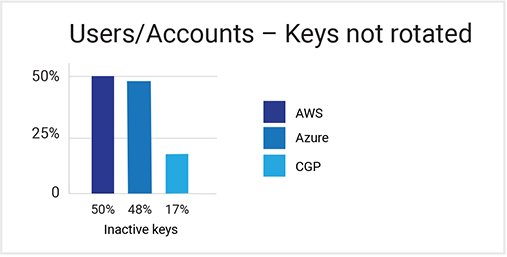 These misconfigurations can lead to unauthorized users getting access to the storage buckets with the potential to:

Encrypt the contents within storage buckets

Access contents from the storage buckets over encrypted channels

Secure back-up storage buckets and the contents within them

From the internal statistics collected by its CSPM organization, Zscaler observed that:

These misconfigurations can be the results of unintentional human error. At times, IT admins and/or users open the rules in the network security group for specific purposes such as debugging or allowing legitimate network operations remotely. But, when finished, they sometimes forget to revert back to the more stringent rules in the network security group/policy which hackers can leverage to penetrate into the cloud-based systems.

Cloud users often have a tendency to enforce the default policy, which is sometimes insufficient for adequate security.

Zscaler highly recommends implementing a zero trust network access (ZTNA) architecture to safeguard all your applications and only allow authorized users to access these applications. If done right using solutions like Zscaler Private Access, you can completely eliminate the external attack surface by blocking all inbound communication and preventing lateral propagation from an infected system. For organizations that are still in the process of implementing ZTNA, here are some short-term best practices when creating network security group/policy rules and applying them to cloud resources to minimize the risk of becoming easy targets for the attackers. 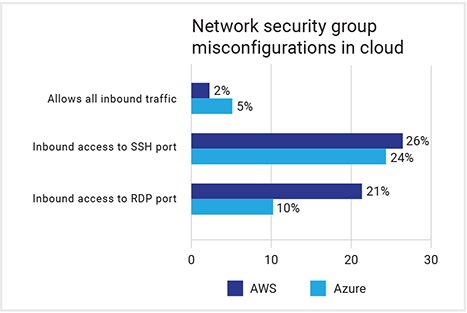 The use of public clouds is growing and so are the attacks targeting them. But that doesn’t mean public clouds are risky and organizations should stay away from them. The ThreatLabZ research showed that the cause of most successful cyberattacks on public cloud instances is due to security misconfigurations rather than vulnerabilities in these infrastructures. Organizations can take simple steps to ensure that their configurations are secure and their data is protected.