When you try to install the application, it asks for the following permissions: 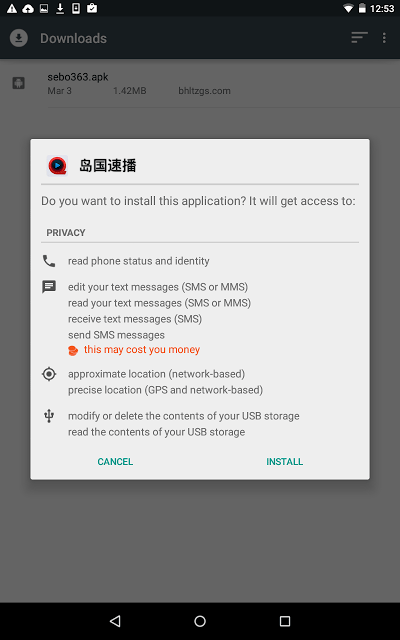 When the user tries to play a video from the application, a JAR file is downloaded from the link hxxp://link[.]kssgx[.]com/cj[.]jar. This URL is stored in the application in the following fashion:

Subsequently it fetches another URL from the downloaded cj.jar, which is then used to drop multiple malicious apps to the user's device. The link for downloading the dropper files are stored in an xml file, the link to which is present in cj.jar

This xml file contains the URL for downloading the dropper files.

All the downloaded files have been flagged malicious by multiple AV vendors. Here are links to 3 malicious APK files dropped on the device by the main application:

This application downloads yet another file from the link hxxp://cdn2[.]upay360[.]cn/pack[.]dat. This is a jar file, which shows some really shady behavior. This jar file uses 3 broadcast receivers:

The application uses the concept of pending intents, which allows another application to use your application's permissions to execute a predefined piece of code.

SMSReceiver is triggered whenever an SMS is received. Its functionality is to fetch the details of each new SMS. It checks whether the SMS has been sent from China and if so, will abort the notification so that the user has no knowledge of the new SMS.

The application also scams the user with premium on-demand videos, which are requested via SMS without the knowledge of users. This application leverages the commonly known 1npay to scam the victims. The application sends out a POST request, in which the method of payment is specified via SMS.

SendBroadcastReceiver listens to the order SMS being sent to the number 106566660020, which is hardcoded in the application. On sending the order message, the user will receive a verify code via SMS. SMSReceiver aborts the broadcast of this message so no notifications are shown for the delivery of the new message to the end user.

DeliverBroadcastReceiver retrieves the verify code from the message and sends it in order to verify the order. This whole process causes the user to lose money.

The application also sends device related information. Below is the POST request sent by the application that was captured during our analysis:

Since the malware does not ask for Administrator privileges, removing it is not a difficult task.
The victim can traverse to Settings option in the Android device.

We urge users to not trust any unknown links received via messages or emails. Additionally, disable the option of "Unknown Sources" under Settings of your device. This will not allow installation of apps from unknown sources.

The application divides the overall functionality between the various dropped files. This can be a mechanism to evade detection by AVs. If one of the applications is detected by AV, the other applications can continue with their work. It is also interesting to note that each of these dropped applications try to target different sim operators in China.

There has been an increasing tendency of malware in disguise of adult rated applications in order to attract victims. The best way to avoid such applications is to stick to official app stores like Google Play and the Amazon app store.