In the days during the Egyptian Internet outage, a number of Egyptian's circumvented the outage through a variety of methods. Speak2tweet is one example of a work-around in which Egyptians could phone in their tweets using the SayNow service. This service grew enormously in popularity in both posters and readers/listeners- we saw roughly a 362% increase in traffic to SayNow yesterday. 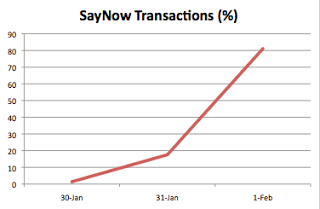