InnfiRAT: A new RAT aiming for your cryptocurrency and more

Recently, the Zscaler ThreatLabZ team came across a new RAT called InnfiRAT, which is written in .NET and designed to perform specific tasks from an infected machine. This blog provides an analysis of this new RAT, including the way it communicates, all the tasks it performs, and the information it steals.

As with just about every piece of malware, InnfiRAT is designed to access and steal personal information on a user's computer. Among other things, InnfiRAT is written to look for cryptocurrency wallet information, such as Bitcoin and Litecoin. InnfiRAT also grabs browser cookies to steal stored usernames and passwords, as well as session data. In addition, this RAT has ScreenShot functionality so it can grab information from open windows. For example, if the user is reading email, the malware takes a screenshot. It also checks for other applications running on the system, such as an active antivirus program.

InnfiRAT sends the data it has collected to its command-and-control (C&C) server and requests further instructions. The C&C can also instruct the malware to download additional payloads onto the infected system.

1) Before executing the main payload, the malware initially checks whether the file is executing from %AppData% directory or not with the name NvidiaDriver.exe. If not, then a web request is sent to “iplogger[.]com/1HEt47" (possibly to check network connectivity).

2) It records all the running processes in an array, then iterates through each process and checks whether any process is running with the name NvidiaDriver.exe. If so, the malware kills that process and waits for an exit.

3) InnfiRAT copies itself as %AppData%/NvidiaDriver.exe and executes it from %AppData% before terminating the current process.

Figure 2: The malware makes a copy of itself in %AppData%

4) After confirming the path of file execution, it writes a Base64 encoded PE file in memory, which is later decoded in its actual format and is loaded after changing the entry point of the file. This is also a .NET executable and contains the actual functionality of the malware.

All the strings inside the file are encoded with a custom encoding scheme that utilizes the XOR operation.

After performing the VM checks, the malware obtains the country and HWID information of the machine it is running on. To obtain the country information, it calls the routine EjarVhXфf8752612307563884480() [FetchNetworkInfo] and fetches the Country key value from the returned data in JSON format. Similarly, to obtain the HWID, it calls the routine ubобмдGogBлzWKrgrыaZucвлC33208440168().

Note: All the enum values are referenced using enum[index] during analysis where the index starts from 0.

It then checks, one-by-one, if the manufacturer contains one of the below-mentioned strings and returns the value from the enum as specified:

2. WMIquery is performed again but this time to obtain the following information:

A check is performed if the PnpDeviceId contains one of the below strings and returns the value from the enum as specified:

If none of the above conditions match, it returns enum[0].

Figure 7: Web request being made

After forming the duplex channel with the name IVictim, it uses the IVictim interface, which contains the following methods:

Figure 10: The subscribe method from the IVictim interface is invoked

It iterates through each task. On each iteration, it first checks for the country value received to be equal to “ALL” OR  the one present in the BasicInfoVictim class, which was obtained earlier AND the action to perform is "DownAndEx" and the URL value is available.

If the above conditions match, then the CompleteTasks method is called with three arguments:

After iterating all items in the UserTask list, it sleeps for 30,000 milliseconds.

Figure 11: Country, action, and URL checks are performed and the specified task is completed

All the running processes in the system are obtained, their names are converted to lowercase and then a check is performed to see if the name matches with any of the following strings:

If there are any matches, the process terminates. Below are the snapshots depicting the actions performed.

InnfiRAT obtains the list of all processes running in the system and kills any process whose name contains one of the following strings:
“chrome”
“browser”
“firefox”
“opera”
“amigo”
“kometa”
“torch”
“orbitum”

Figure 15: Kills processes that contain any of the above-mentioned strings

Here are some tasks performed by the malware based on the commands received from C&C server:

InnfiRAT downloads the file from the specified URL by calling the routine жRfаeQbrwйfsLGыhчUrEжьFхaяGчрлCдtGжSofьQvдnIмs8383484343838630833542717281211() [DownloadFileFromUrl]. Inside this routine, a directory is first created with the name TEMP inside the %AppData% if it doesn’t exist. Then the file is downloaded and saved inside this folder with the name extracted from the passed URL. The URL passed is broken into parts via delimiter ‘/’ and the last item is used as the file name.

Once the download is complete, it calls the routine rLPсаWFоWcTjzпTэBFWkъмзтшпD147152108377454681517643543() [ExecuteFile] with three arguments to execute the downloaded file.

Inside the routine, it collects the following information:

It then sends the information to the C&C server.

Figure 19: UserProfile info being collected and sent to the C&C server

It calls the GetDlls() routine, which obtains information inside a list of type DownloadDll where DownloadDll has two keys:

After fetching the list, InnfiRAT traverses each element inside the list via a for-loop. Inside the for-loop:

A check is performed if no file exists specified by Path key in the executing module directory. If the check is true, it creates the file and writes the value of ByteArray to this created file.

Finally, data obtained from UserProfile() is sent to the C&C server.

Figure 21: A directory is created, file is created, and KillProcesses is called; response is sent to the C&C server

InnfiRAT calls the GetDlls() routine, which obtains information inside a list of type DownloadDll where DownloadDll has two keys:

After fetching the list, the malware traverses each element inside the list via for-loop. The following occurs inside the for-loop:

A check is performed if no file exists specified by the Path key in the executing module directory. If a check is true, it creates the file and writes the value of ByteArray to this created file.

It creates an empty list of BrowserCook type where BrowserCook has two keys, namely:
“CookiePaths”
“BrowserName”

The name and corresponding cookie path are retrieved for the following browsers one by one:

A BrowserCook type element is created with the fetched information and is added to the list created earlier.

Figure 24: Browser info is retrieved and added to the list

Inside, two for-loop elements of the BrowserCookie type are created, where the Browser key and FileArray key are both assigned values using the information from the previously created BrowserCook list and the FileName is set to _Cookie.txt if the browser name for the current element is not “Mozilla”, or else it is set to Cookie.txt.

The harvested BrowserCookie list is then sent to the C&C server and the temporary file and directory are deleted.

Figure 26: File and directory is deleted

A check is performed to see if a file for a Litecoin or Bitcoin wallet is present in the system at the following location:

If it is found, then the element of type BitcoinWallet is added to the list after assigning a name to the WalletName key and reading the corresponding wallet file in the WalletArray key.

Figure 27: File presence is checked, BitcoinWallet element is added to the list

Finally, the created list is sent in response to the C&C server.

Figure 28: List is sent in response to the C&C server

InnfiRAT collects all the .txt files available on the desktop whose size is less than 2,097,152 bytes inside a list of CustomFile types. CustomFile has two keys namely:
“Name”
“FileArray”

The created list is sent in response to the C&C server.

Figure 29: Files are collected and sent to the C&C server

7. LoadProcesses() - Get the list of running processes on the victim machine

It obtains the list of all the processes running in the system and sends the list in response to the C&C server.

Figure 31: Process information is obtained and the list is sent to the C&C server

8. Kill(int process) - Command to Kill a specific process on the victim machine

InnfiRAT obtains the list of all the processes running in the system and then inside a for-loop, the processID of obtained processes is compared with the processID passed as an argument to this routine one at a time. If there is a match, the process is killed and the flag variable is set to true.

Finally, a response is sent to C&C server.

Figure 32: Process is killed and response is sent

9. Screenshot() - Take a screenshot on the victim machine

It calls the qюFpьGoJv97921676245() [CaptureScreenshot] routine and the returned value is sent to the C&C server.

Figure 33: Screenshot captured and sent to the C&C server

This creates a new CMD process, builds the command line argument using the command passed as an argument to this routine, and finally starts the process.

The name and corresponding cookie path are retrieved for the following browsers one by one:

A BrowserCook type element is created with the fetched information and is added to the list created earlier.

Figure 36: Browser info is retrieved and added to the list

Finally, a response is sent to the C&C server. 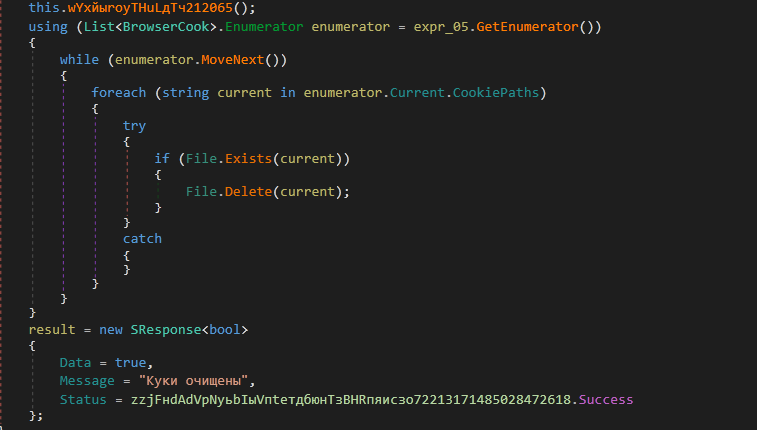 Figure 37: The routine wYxйыrоyTHuLдTч212065() [KillProcesses] is called, cookie files are deleted, and response is sent to the C&C server

A RAT, remote-access trojan, is a type of malware that includes a backdoor, giving intruders the ability to control the targeted computer remotely and enabling them to perform any number of tasks, such as logging keystrokes, accessing confidential information, activating the system's webcam, taking screenshots, formatting drives, and more. They can also be designed to spread to other systems on a network.

Because RATs are usually downloaded as a result of a user opening an email attachment or downloading an application that has been infected, the first line of defense is often the users who must, as always, refrain from downloading programs or opening attachments that aren't from a trusted source.

The ThreatLabZ team continues to monitor this threat and ensure that Zscaler customers are protected.