Making the decision to leave your current job and seek employment elsewhere can be an exciting time as you imagine how much better your life and career will be when you find that dream job. But that excitement can quickly turn to anger and despair when the job search tool you were using to help you land that dream job turned out to be a phishing attack that stole your identity.

Sadly, this isn’t just a hypothetical scenario, as the Zscaler ThreatLabZ team observed a scheme just like this come across the Zscaler cloud.

In August 2020, we observed network activity to a malicious site that used LinkedIn, a popular professional networking and job search site, as the lure for a social engineering scheme designed to steal a user’s credentials and spread malicious binaries. The bad actors also used a legitimate site hosting company, called Yola, to host the malicious content in an attempt to further look legitimate. The .NET-based binaries hosted on this site are related to the Agent Tesla malware and another previously unseen in-the-wild malware family. Its major functionality is information stealing and exfiltrating data through SMTP.

In this blog, we provide a detailed description of the tools, techniques, and procedures of this threat actor and the malicious binaries hosted on this site, as well as the credential phishing methods used.

Figure 1 below shows the site that was set up by attackers on a legitimate website hosting server provided by Yola. The web user interface of the site uses the well-known LinkedIn logo and poses as a recruitment company called “Jobsfinder 3ee,” which pretends to help the candidates find relevant jobs in various geographical regions around the world.

The download links on the web page lead to a ZIP archive containing the infostealer .NET-based binary.

The complete list of URLs used in this campaign, along with the filenames, is provided in the indicators of compromise (IoC) section later in the blog.

During the course of monitoring this threat actor, we noticed that the download links on the web page were updated frequently. On August 7, 2020, we observed that the original ZIP archives on the server were replaced with password-protected archives.

In addition to the malicious binaries hosted on this page, the user is also given the option to upload a CV. When the user clicks on this button, they are redirected to a credential phishing site.

This site spoofs the LinkedIn login page as shown in Figure 2. Figure 2: The credential phishing page designed to look like a LinkedIn page.

This is a multistage social engineering attack. Once the credentials are entered by the user, a new web page is displayed (as shown in Figure 3), which prompts the user for the following information: 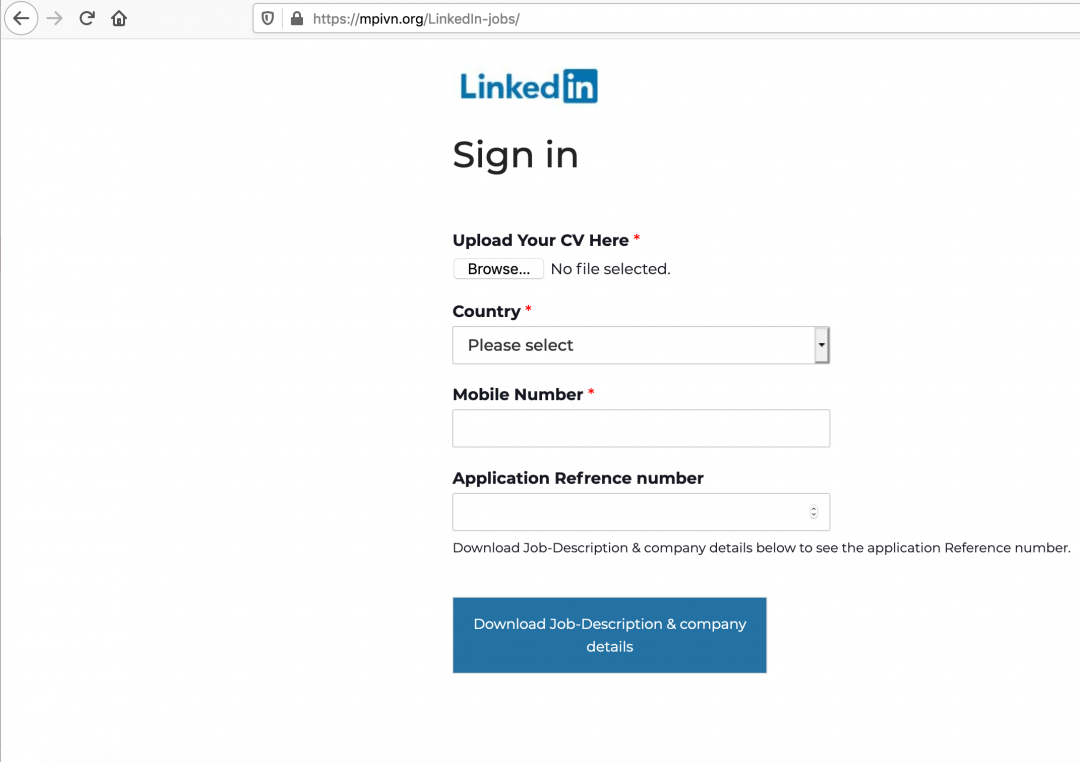 This threat actor specifically targets users of LinkedIn. It was a low volume campaign targeting users in the healthcare and aviation industry sectors. In addition to the Agent Tesla malware, it also used a custom payload that we have not seen before. The following attributes of the threat actor's infrastructure indicate the focus is LinkedIn users. 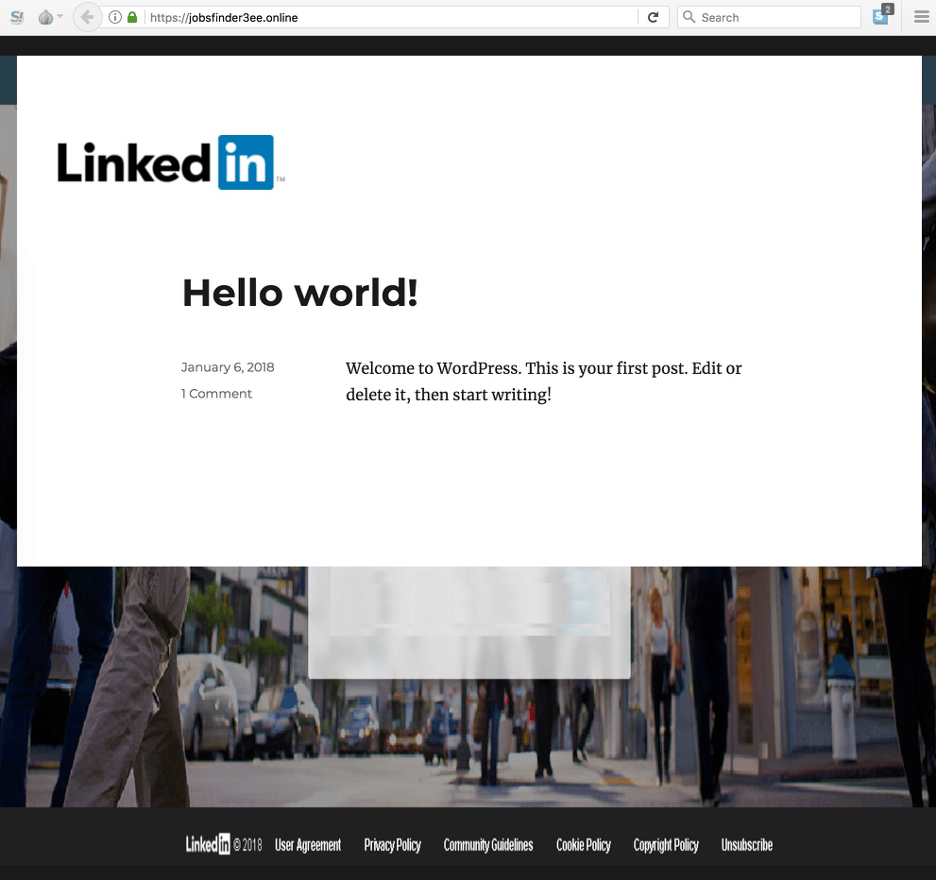 Figure 4: An old web page that spoofed LinkedIn and used the name "Jobsfinder 3ee", which is similar to the current campaign.

For the purpose of technical analysis, we will consider the .NET binary with following details.

Since all the binaries in this campaign share the same packer, we first describe in detail the multiple stages of unpacking required to access the final payload.

This binary spoofs the metadata data of a legitimate Comodo security application, as shown in Figure 5.

The resource section, as shown in Figure 6, contains multiple bitmap images that are later assembled together and decrypted to extract the next-stage payload, as explained later in the blog. Figure 6: The assembly embedded as a byte array.

There is a .NET assembly embedded inside the main payload as a byte array as shown in Figure 7.

Figure 7: The byte array to be decoded and loaded by Assembly.Load().

This byte array is decoded and loaded at runtime using the Assembly.Load() method, as shown in Figure 8 and Figure 9. The decoding routine is simple. It subtracts the value 0x11 from each byte of the byte array to get the resulting .NET assembly, which will be loaded using reflection.

It creates a delegate to invoke the Main() method of the stage 1 decrypted DLL to carry out the further stages of unpacking.

It is interesting to note that the string, “Load”, which is used to invoke the Assembly.Load() method, is encoded, as shown in Figure 10.

This was a similarity shared among all instances of packers used in the campaign where the “Load” string was split into individual characters and assembled at runtime. This could be done to bypass static analysis-based solutions that search for Assembly.Load() method in the decompiled code.

This DLL is a 32-bit .NET binary that spoofs itself as a legitimate application from VMWare, as shown in Figure 11. It is important to note that the stage 1 DLL was the same for all the instances of the .NET binaries observed in this campaign.

This DLL contains another encoded .NET assembly embedded inside, which will be decoded and loaded at runtime, as shown in Figure 12. 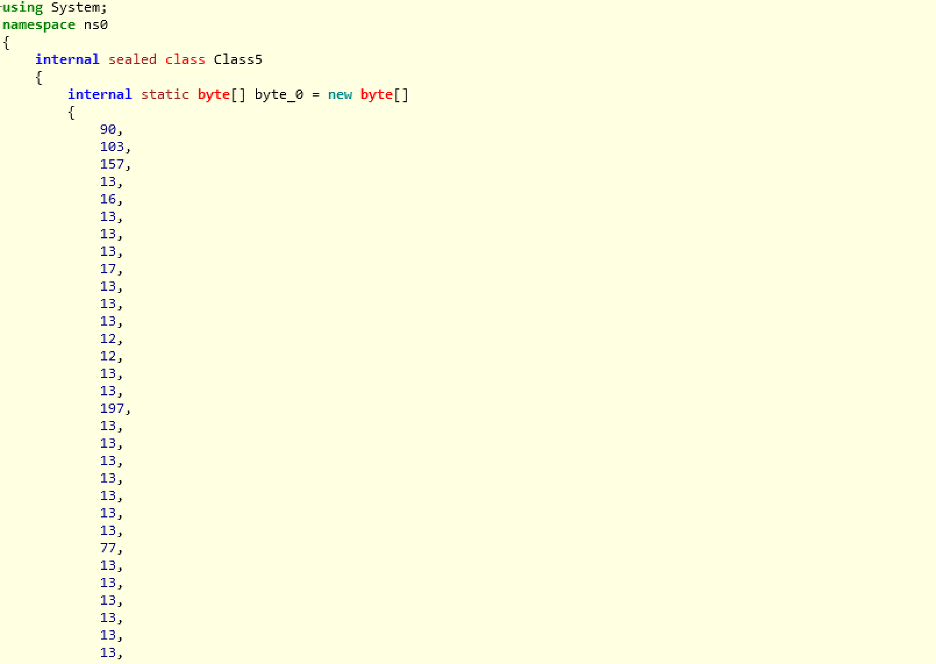 Figure 12: The payload has a byte array similar to the first packer.

The stage 2 DLL, which is decoded and loaded by the stage 1 DLL, is responsible for extracting the metadata and the final payload from the multiple bitmap images that are stored in the resource section.

The main method inside this assembly is called ReadMRes() with the name "resourceLib," which extracts the relevant information from the bitmap images, as shown in Figure 13. Figure 13: The ReadMRes responsible for decryption.

The result of the above subroutine is an array of key-value pairs, as shown in Figure 14. This array contains useful metadata that is used by the payload in later stages for choosing the Windows registry key path, the name used for persistence, and the name of the dropped binary.

This array also contains a gzip compressed payload in element index: 15. Figure 15 shows the relevant code that will decompress it.

After gzip decompression, we obtain a .NET payload that is obfuscated using ConfuserEx. Once we deobfuscate the ConfuserEx protection, the main method of the final payload is shown in Figure 16. 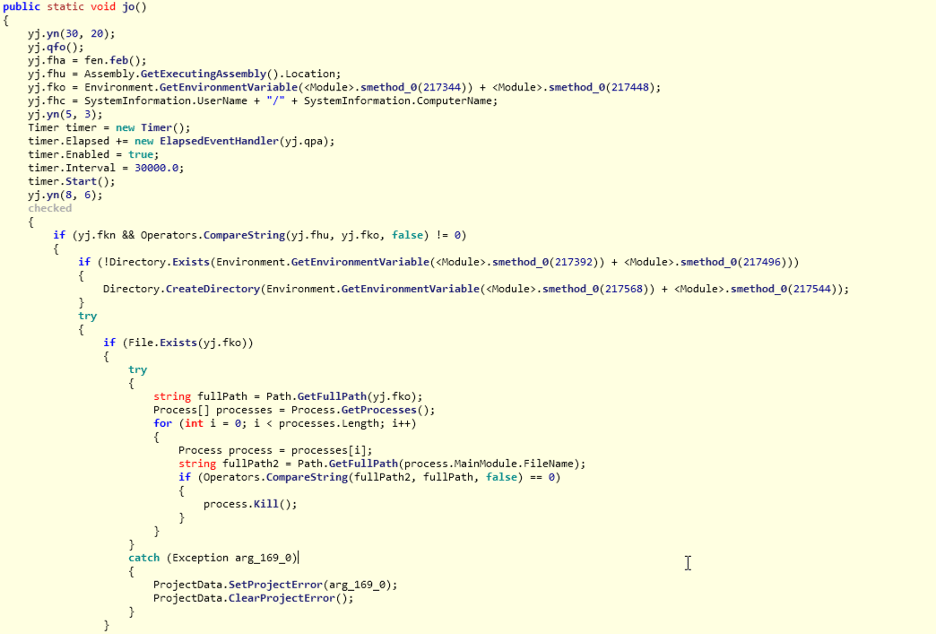 The final unpacked payload, in this case, is Agent Tesla. Since Agent Tesla is a well-known password stealer spyware, we will not be describing its technical functionalities in detail in this blog.

All the strings are encrypted using the RijndaelManaged algorithm with a key size of 256-bit and an initialization vector size of 128-bit.

Figure 17 shows the string decryption routine that accepts an integer as an argument and is used to calculate the index of the encrypted string in an object array. Figure 18 shows the object array containing an array of integers with the following format: Based on this, we can write a string decryptor for the final payload. The complete list of decrypted strings are mentioned in Appendix II.

In addition to Agent Tesla, we also encountered another payload previously unseen in the wild. It is a very basic information stealer capable of stealing keylogs, clipboard data, and screenshots. It sends stolen data to an embedded yandex.com email address. All layers of the packer used in the sample are the same as the ones used in Agent Tesla samples.

The unpacked final payload is signed with a certificate from “DESKTOP-K179H9L\GO TECH COMPUTER” as shown in Figure 19. Figure 19: The digital certificate used to sign the custom malware.

It contains the following PDB string:

Figure 20: The function responsible for sending saved screenshots over SMTP.

Variants of this sample were first seen on Virustotal in June 2020. The initial samples were distributed without any packer.

All older variants were signed by the same signer and have similar PDB strings containing the username “GO TECH COMPUTERS” in the PDB path. Below are the other PDB strings observed.

In some variants, the subject lines used are slightly different than this payload as described below.

The dropped binary called chrom.exe in this case is a command line executable that uses the Google Chrome browser's icon. It is run by this stealer with a hidden window. Most of the activities of this executable are related to building commands and executing them using compsec or cmd.exe.

It creates the following directories:

Upon execution, it shows the following message: Figure 21: The dropped payload runs in the background in a hidden window.

Since it runs in a hidden window, it just displays the above message and waits for a keypress event. Figure 22. This threat was successfully detected by the Zscaler Cloud Sandbox.

This threat actor is targeting LinkedIn users, and has built an entire web and email infrastructure specifically for it. As always, users should be cautious when receiving emails out of the blue, even if those emails appear to be related to something you are interested in, such as help finding a new job. And always be sure to only enter credentials or upload your CV on verified websites. If the site comes to you from an unsolicited email, be wary.

Below is the complete list of decrypted strings which were extracted from samples used in this campaign.

Writing is not allowed

Writing is not alowed