Introduction
Zscaler ThreatLabZ came across a new Infostealer Trojan written in .NET that utilizes popular tools like Fiddler & Json.NET for its operation. In April, the new Infostealer family of Spanish origin was first noted targeting users in the U.S. and Mexico.

The malware authors are currently targeting users of Mexico's second largest bank, Banamex, but it is capable of updating the configuration file to include more financial institutions.

Delivery Mechanism & Installation
The infection cycle starts with an installer payload that uses double extension 'curp.pdf.exe' in a relatively poor attempt to pose as a PDF document to the end user. The malware payload does not have the PDF file icon embedded in it, so the user will see the document file with a generic application icon as seen below:

Sample URLs that we have seen serving installer payloads in last two weeks:

Once executed, the installer will attempt to download the following three components on the victim's machine:

The above files are downloaded in the windows system directory as seen in the code below:

The installer will then execute the main Infostealer payload and terminates itself.

The Infostealer payload first checks for the presence of the FiddlerCore3dot5.dll and Newtonsoft.Json.dll on the victim's machine. If the DLL files are not found then the malware will attempt to download these files from a new location that is hard-coded in the payload. Once the DLLs are in place, the malware will check for the victim's operating system version as seen below:

For Windows XP (32-bit & 64-bit) and Windows Server 2003, the malware will create an autostart registry key entry to ensure persistence upon system reboot. Then, the malware downloads a configuration file and starts the Fiddler proxy engine.

Upon successful installation, the Infostealer Trojan will collect information such as “MachineName”, “UserName”, “systeminfo” and “hostip” from the infected system and sends it to the remote C&C server in Base64 encoded format as seen below:

The C&C server will respond back with a configuration file that contains a list of URLs pointing to alternate C&C locations as well as other instructions. The malware uses Json.NET library to parse the server response and save it in the XML format with file name registro.xml. Here is a sample configuration file that we saw during our analysis: 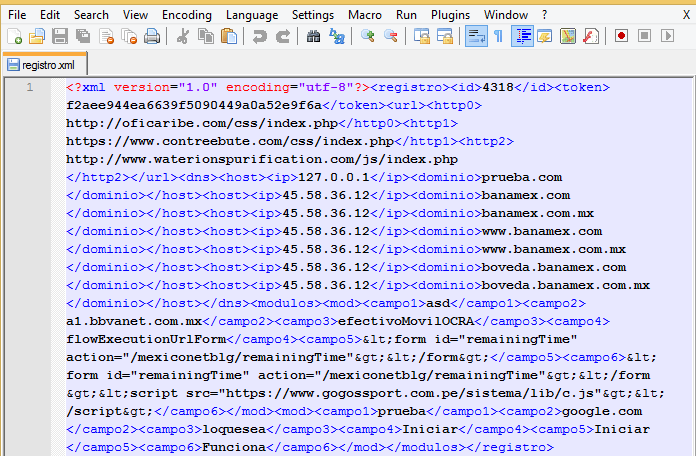 The configuration file also contains a list of Domain to IP tuples that are primarily used by the Infostealer Trojan to hijack user requests to those domains and redirecting them to a malicious server hosting fake phishing site for the targeted domain.

The malware initializes a timer component with an interval of 10 minutes that will trigger a RefreshInfo function call. This will result in a download of a new configuration file from the next URL in the list every 10 minutes.

It is interesting to note that the malware leverages Fiddler proxy engine to intercept HTTP/HTTPS connections and redirecting the users to the attacker-controlled server hosting fake site.

The malware achieves this by adding x-overrideHost flag containing attacker's Server IP address, if the domain name is on the target list in the C&C configuration file. This will cause Fiddler proxy engine to resolve the domain to the supplied IP address sending the victim user to a fake website.

Screenshot of fake Banamex page from an infected system: 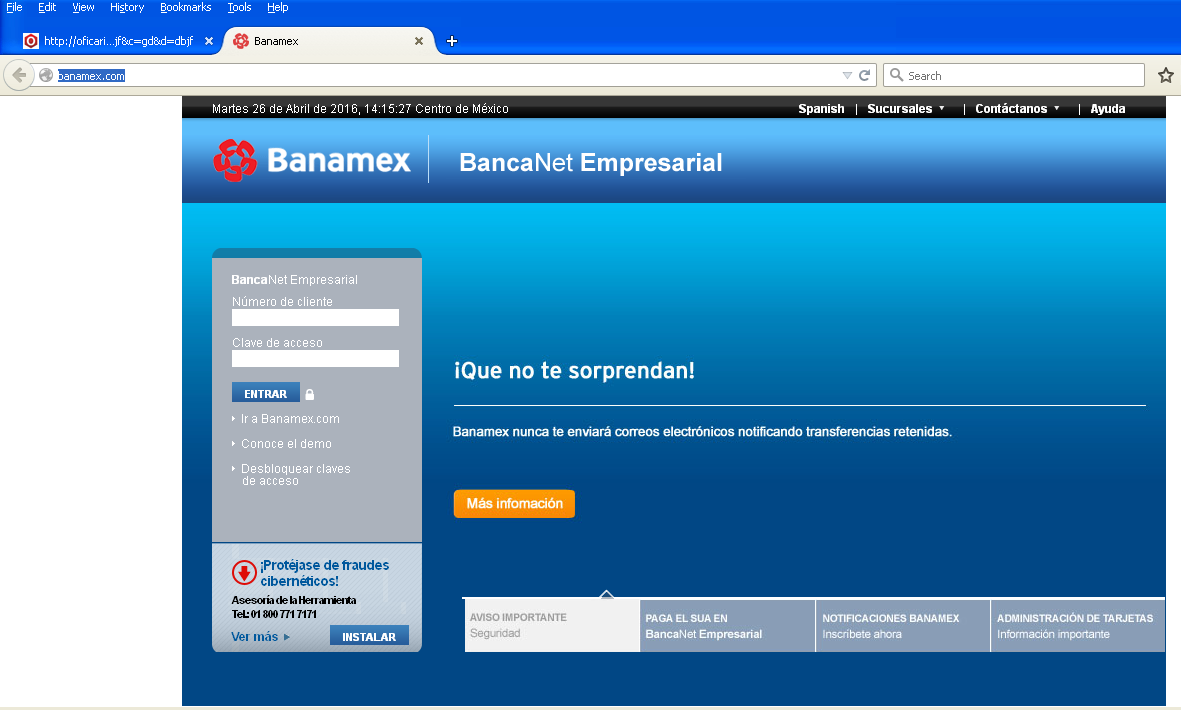 Conclusion
We regularly see multiple .NET based malware payloads but this particular Infostealer Trojan caught our attention because of the use of popular application libraries like Fiddler & Json.NET in its operation.

Mexico's second largest bank - Banamex, appears to be the main target of this Infostealer Trojan for credential theft and financial fraud. However, the authors can easily add more targets given that they are actively updating the list every 10 minutes. Zscaler’s ThreatLabZ has confirmed coverage for the initial downloader and the Infostealer payloads, ensuring protection for organizations using Zscaler’s Internet security platform.