This blog provides a technical analysis of Nokoyawa 2.0 including its new configuration, encryption algorithms, and data leak site.

Nokoyawa 2.0 cannot be executed without providing the required command-line arguments. When run without arguments, Nokoyawa will print the following help message shown in Figure 1.

The command-line arguments --file (to encrypt a single file) and --dir (to encrypt a directory) are identical to the previous version of Nokoyawa. However, Nokoyawa 2.0 requires a configuration file to execute the ransomware via the --config command-line argument. The configuration parameter is a Base64 encoded JSON object that has the following keys and values shown in Table 1.

The decision by the Nokoyawa malware author to pass a full configuration file via the command-line is a unique design choice. This is indicative that the malware author has developed the ransomware to be flexible for mulitiple threat actors who are likely paid as affiliates to compromise organizations and deploy the ransomware in return for a percentage of the profit.

Nokoyawa 2.0 uses Curve25519 (via the open source x25519_dalek Rust library) for asymmetric encryption and Salsa20 for symmetric encryption. Nokoyawa first generates an ephemeral Curve25519 key pair. The ephemeral private key is used to generate a shared secret using a Diffie-Hellman key exchange with the Curve25519 public key that was passed via the config command-line parameter. The result is used as a Salsa20 key and the file extension is used as the nonce, which must be 8 bytes (as described in Table 1). Figure 2 shows an example file encrypted by Nokoyawa 2.0. 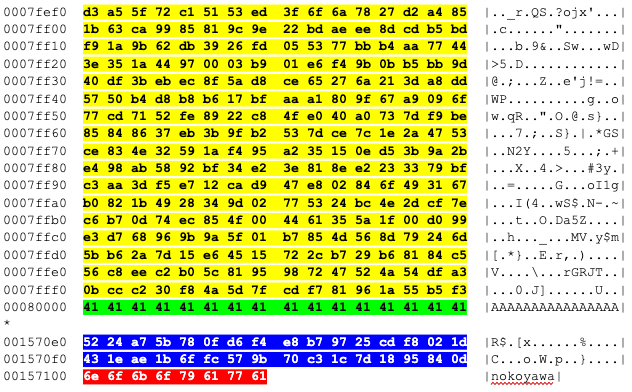 As shown in Figure 2, the 32-byte ephemeral public key (blue) and the 8-byte nonce (red) are appended as a 40-byte footer at the end of the encrypted file. Similar to most ransomware families, Nokoyawa encrypts the file in chunks based on the file's size. If the file's size is less than or equal to 0x80000 (524,288) bytes, the full file will be encrypted. Otherwise the code implements an algorithm that determines the number of blocks and the block offsets to encrypt in the file. Each block will be encrypted in chunks of 0x80000 bytes (yellow) followed by blocks of unencrypted bytes (green) as highlighted in Figure 2. Since Nokoyawa only partially encrypts files larger than 0x80000 bytes, encryption is very fast.

ThreatLabz has developed a proof-of-concept tool to decrypt files encrypted by Nokoyawa 2.0 if the Curve25519 private key is accessible. This decryption tool is available in our GitHub tools repository here.

As previously mentioned in Table 1, the Nokyawa ransomware note filename and content is passed via the configuration command-line parameter. An example Nokoyawa ransom note is shown in Figure 3. 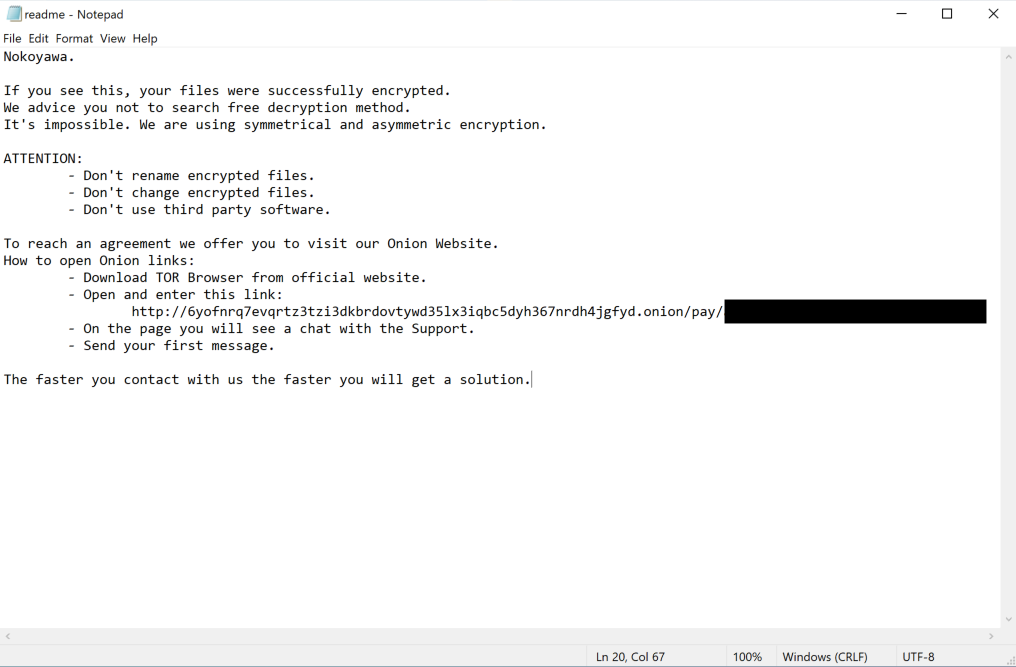 Nokoyawa ransom notes contain a link to a TOR hidden service as shown in Figure 4. 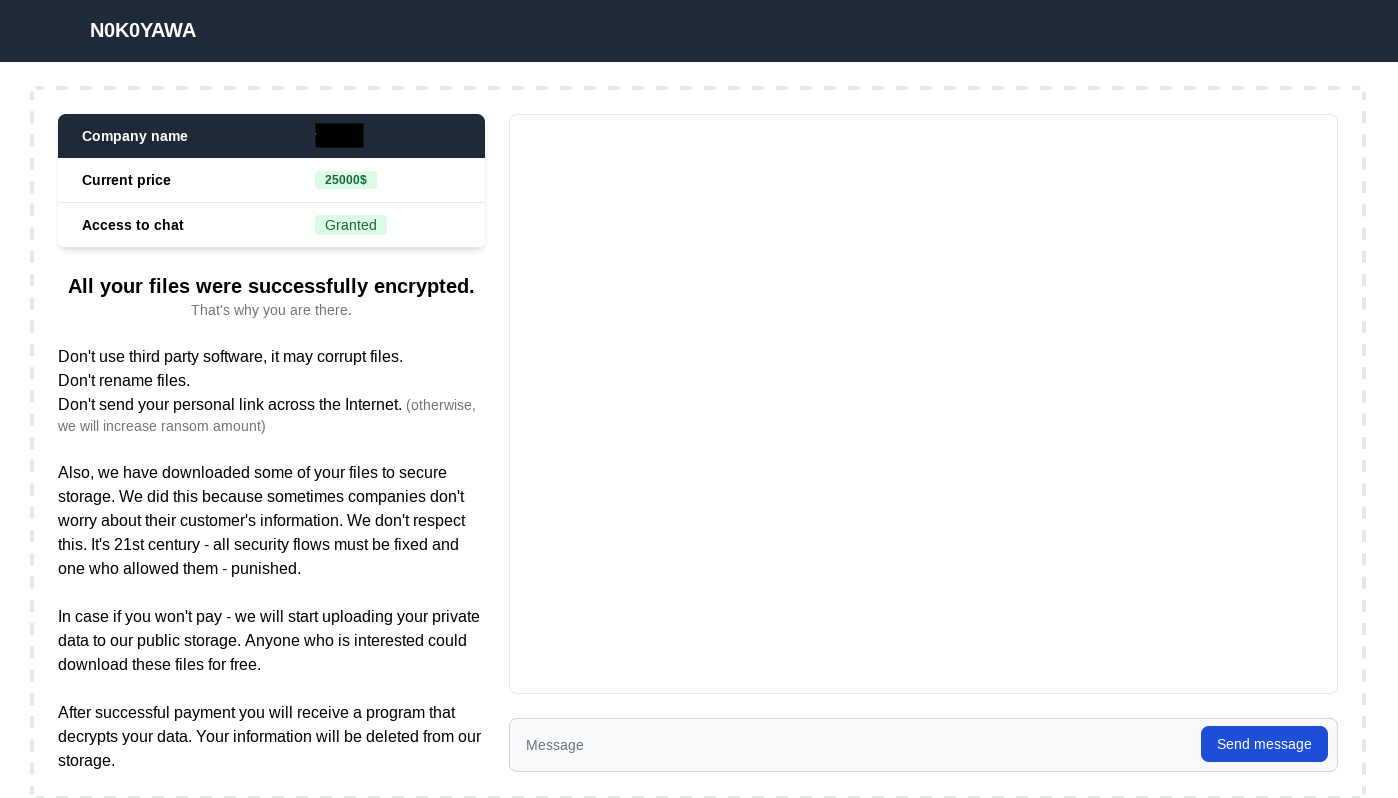 The same TOR hidden service also hosts a data leak site. Currently, only one victim is listed on the site as shown in Figure 5. This may suggest that Nokoyawa is not currently compromising a large number of organizations, or the threat actors may only perform double extortion for a subset of victims.

The Nokoyawa threat actor continues to update the ransomware and launch new attacks. The development of Nokoyawa 2.0 using the Rust programming language is likely designed to improve file encryption speed and to better evade antivirus and EDR products. The group has long claimed to perform double extortion attacks without offering much proof, until now. 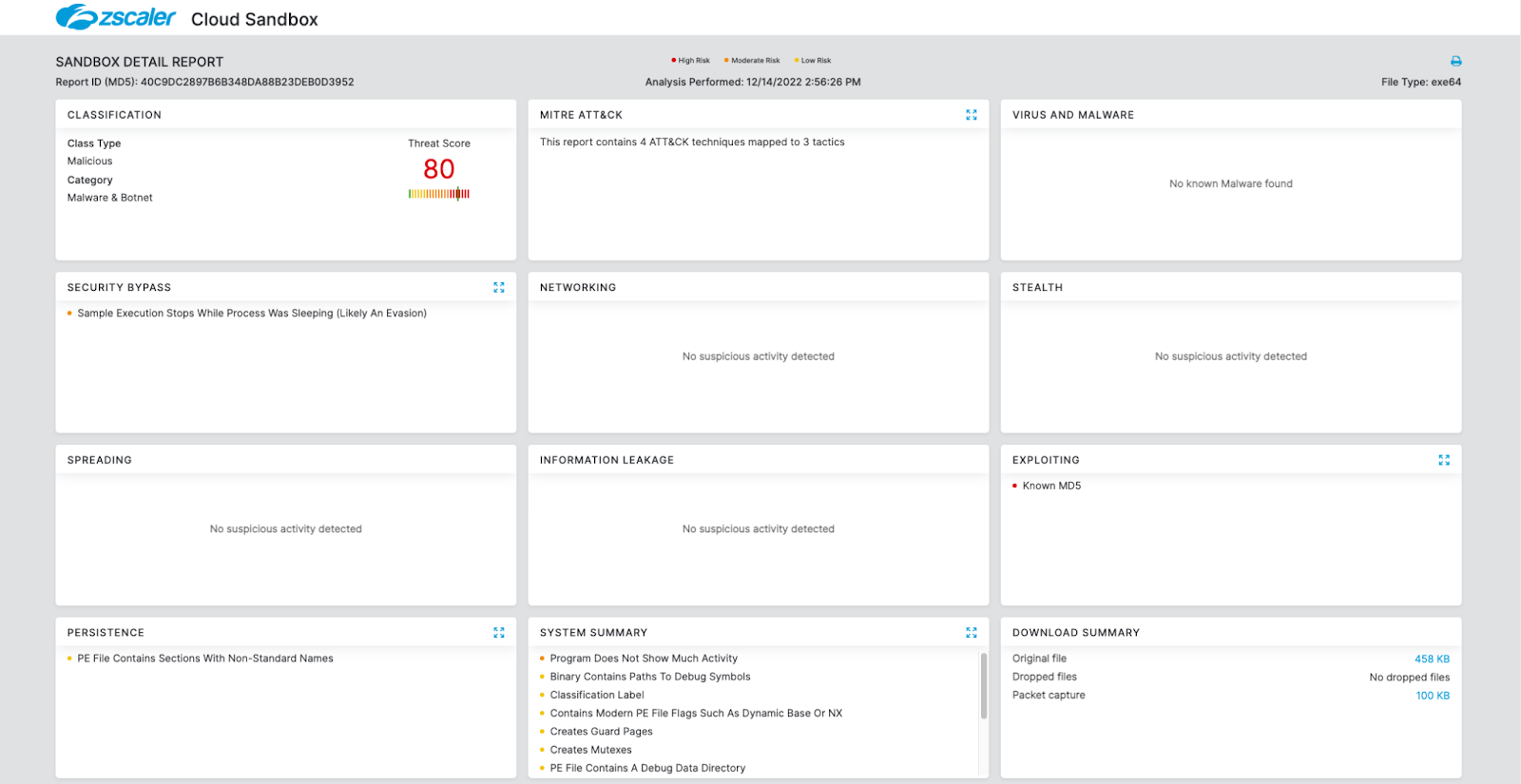