Tax Season is once again upon those of us who don’t have a tax shelter company in Panama. This year, the IRS warned of a 400% increase in phishing attempts and tax related e-mail scams. While phishing can be leveraged to steal credentials and other information directly, malware attacks can give a foothold to surveil users and networks, and steal all kinds of confidential information.

A broad search of Tax related files indicates that there are a number of users actively downloading files that are related to filing their yearly income taxes. Scammers are counting on this subset of users to exploit.

In the next section, we will detail some attacks attempting to social engineer and infect the unwary tax-preparer.

In addition to the e-mail based threats the IRS warned of (which we will detail below), we have found some fake downloads for commonly-used tax software such as TurboTax. These "Download Manager" packages rely on search engine poisoning combined with unwary users looking for a way to download tax software, even if it may not be completely legal. 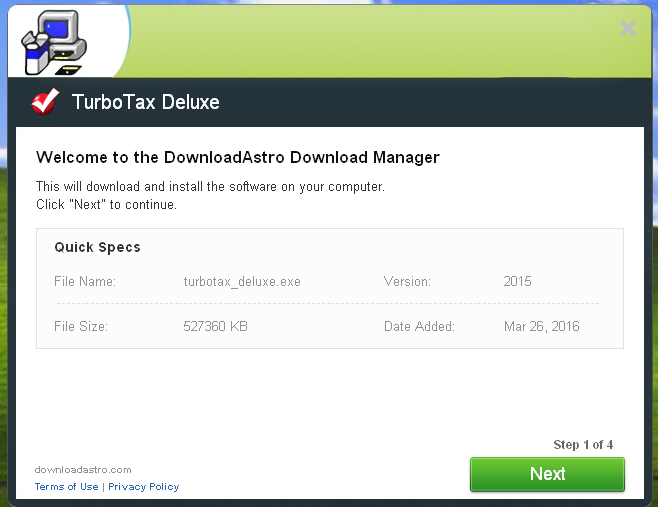 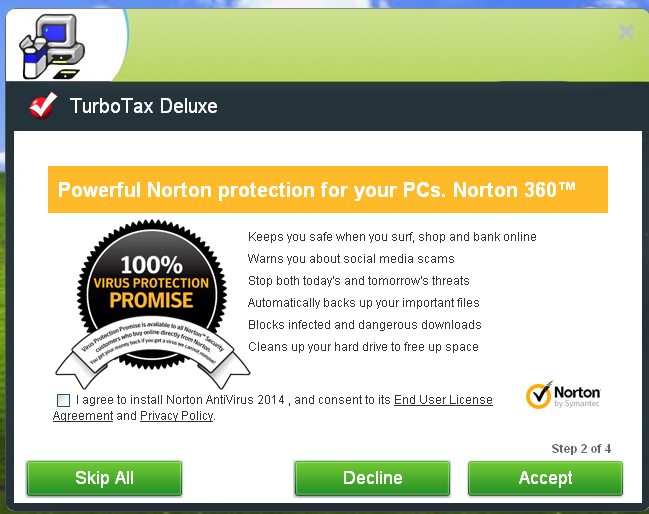 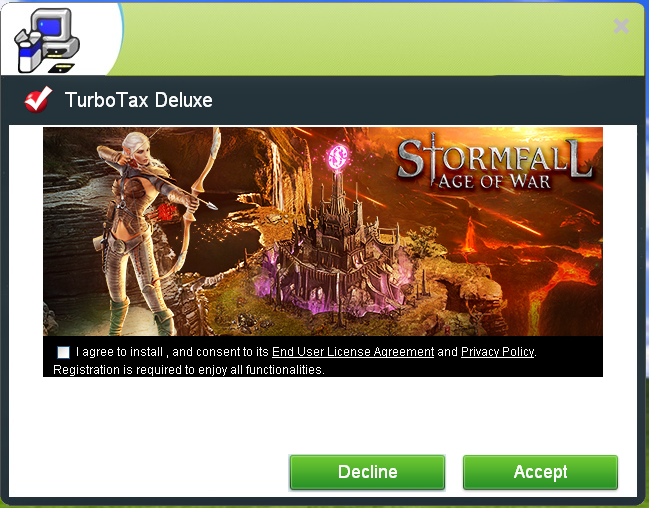 Besides promising TurboTax, one of the fake "installer" packages we found also offers to install Norton and a free-to-play MMO called StormFall.

Since StormFall is web-based, the "installation" consists of placing a shortcut entry in the start menu that launches Chrome with the address of Stormfall (including the adware author's advertising ID, of course).

If the Norton option was selected, an icon for an app called Smart Wrapper appears in the taskbar. Opening this app from the taskbar shows the Smart Download status window, depicting the status of the Norton download.

In the end, this "installer" doesn't even install the TurboTax software that was the original lure. To add insult to injury, the user is shown two browser tabs, one of which is the official TurboTax purchase and download page.

Generating advertising revenue is the primary purpose of threats like these, however they still create a situation where an unknown actor with unknown intentions has achieved the ability to monitor the system, gather information, and make system changes including installing additional software packages.

Our first e-mail based case comes via a ZIP attachment from a scam e-mail aptly named ‘Tax Report.zip’. At the time of research, this threat was detected by 34/56 AV vendors on VirusTotal. The threat itself is a family of Trojan Droppers known as Bagsu. Its purpose is to download additional malware payloads and gain remote access to the PC to collect sensitive information. This sample appears to be no different as it delivered a payload from the Worm family Gamarue.

Gamarue is a Worm that copies itself to all removable devices and network drives connected to the victim’s system. Once installed, it begins beaconing to remote control servers with information about the user. It can download new malicious modules to the victim after infection or simply perform reconnaissance on the user’s system. At the time of research, this sample was already well covered with a score of 46/56 on VirusTotal.

The sample made other attempts to connect to malicious domains, but these were sinkholed at the time of research:

Our second e-mail sample is part of a spam campaign that has been targeting Indian national taxpayers this year. In this campaign, emails are sent from spoofed Indian government domains, alerting the victim that a sum of money has been deducted from their bank account to cover owed taxes. The email instructs the victim to see the challan (receipt) for the transaction, which is a zip archive either attached to the email or hosted at a malicious domain. The archive, typically named some variant of “Tax Payment Challan.zip”, contains a malicious executable. Symantec reported on this campaign earlier this year. This threat remains active, and ThreatLabZ has seen incidents going back to November of 2015.

The malicious payload is an infostealer trojan that attempts to dump passwords from browsers installed on the victim’s machine. The threat is detected with a ratio of 41/57 on VirusTotal, but is mainly detected under generic threat names. The payload is a Visual Basic binary that installs itself in %APPDATA%\Microsoft\Windows\Start Menu\Programs\Startup\ for persistence. The binary also stores a UPX-packed, custom-compiled cURL binary as a resource. 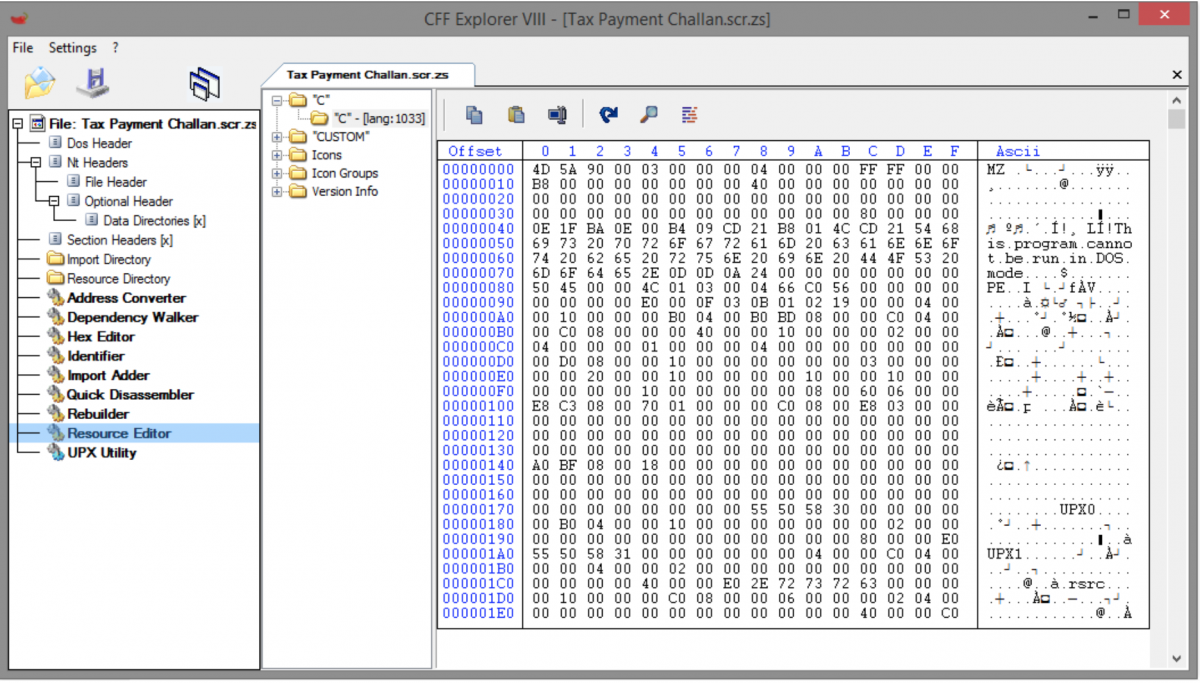 The trojan extracts the resource and uses cURL to download additional payloads from a malicious domain. These tools are wrappers for various freely-available browser password dump software.

The trojan runs the password dump utilities, collects their output, and sends it via HTTP POST to a separate malicious domain.

Zscaler provides coverage for the trojan payload and its network communication.

The following domains are contacted by the infostealer:

The initial payload has been observed downloaded from the following domains:

Zscaler protects its customers from these threats with multiple layers, but the best protection in this case is to be mindful and cautious. As the IRS Spokesperson Mark S. Green stated: “The IRS DOES NOT initiate contact with taxpayers by email, text, social media or electronic communications to request personal or financial information."

If you receive a suspicious email from the IRS, report it by sending it to [email protected]