Cloud environments are becoming increasingly complex and challenging to manage from a security standpoint. In a cloud-native application infrastructure, “workloads” are built by developers using code (infrastructure as code, or IaC) and controlled by DevOps using automated “pipelines.” The new infrastructure is constantly evolving, while the security implications of the environmental changes are often easy to neglect.

As a result, security admins find it challenging to answer basic questions when it comes to their cloud environments, such as:

As defenders, we are required to adopt the attacker’s perspective and uncover “toxic combinations” - the potential attack paths in a cloud environment. The more complex the environment, the harder it is to assess what are the “opportunities” presented to a potential adversary.

Identifying the attack paths and toxic combinations in the cloud environment are ever more challenging for the following reasons: 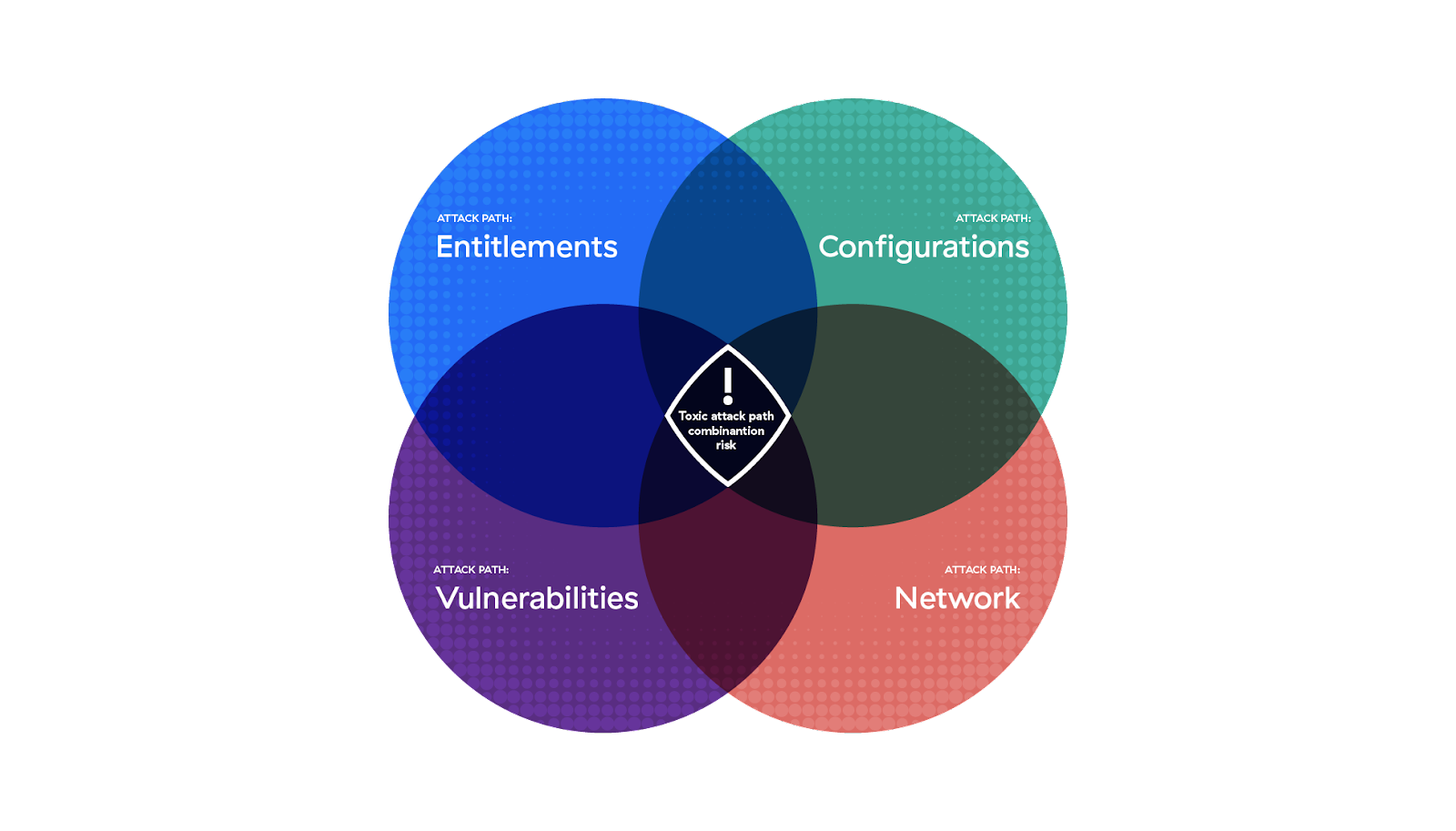 As attack paths and toxic combinations are complex and multi-layered - so should be the security solution. Constantly monitoring all security aspects of the cloud, such as entitlements, IAM, configurations, and vulnerabilities is crucial. Having gained this visibility - the next step is to correlate all that knowledge into finding what an adversary could leverage to compromise the workloads and data. These paths should be highlighted and prioritized to the security admins and to the developers, along with crystal-clear remediation recommendations.

In this post, we will present two use cases, each one of them representing a complex attack path that a cloud account is exposed to.

These use cases aim to demonstrate the level of complexity cloud attack paths have and how hard it is to identify that such a risk exists. We will follow with some immediate security measures to address the threat in these use cases.

Suppose there is an EC2 instance running a workload for a brand new cloud-native application. To expose web access, port 443 is defined as open to 0.0.0.0 in the security group along with a corresponding ACL and route rules.

The application is heavily utilizing S3 service, reading and writing to various buckets. Permissions to access the AWS resources are managed by assuming a role that is attached to the EC2 instance via instance profile. The temporary credentials of the role are accessible to the instance without authentication, via the Instance Metadata Service (IMDS), by accessing the following URL from within the instance.

The response will contain the temporary role’s keys

A cloud architect was unable to isolate specific actions the application would need, and attached a role with the AmazonS3FullAccess permission policy to the EC2 instance. As a result, rendering the instance as a full S3 admin.

The architect was unaware of the risk—IMDS version 1 is enabled for the instance. Version 2 of the IMDS provides important protection for the temporary role credentials, from being leaked by an adversary that can get the server to access a URL of their choice (and return the results to them). Version 1 lacks these security controls. As a result, if an adversary finds an SSRF vulnerability on the web application, they could get full access to the role credentials. This can be achieved by tricking the server into accessing the metadata service URL and returning the response. 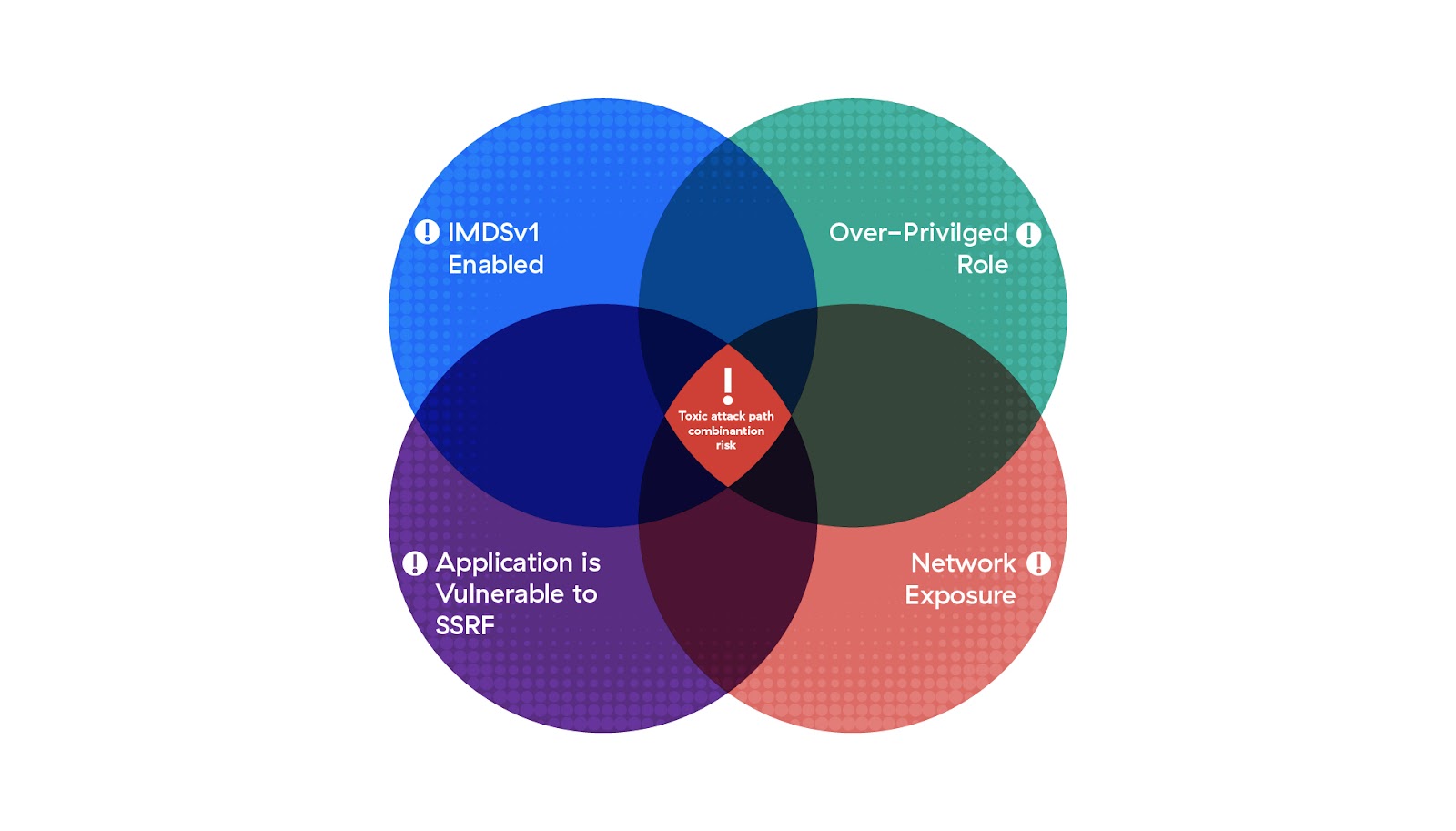 Each one of the above configurations on its own would expose the workload (the EC2 instance), and the cloud-native application to risk. However, all 3 risky configurations combined result in a far greater risk. Once an SSRF vulnerability is found on the instance, an adversary could obtain full access to all the S3 buckets of the account, that often contain highly-sensitive data.

At this point, an attacker could leak the data, delete the data, or encrypt the data and extort the cloud-native application owner using a ransomware attack.

What would posture control do?

Zscaler Posture Control would identify a powerful role assigned to the EC2 instance. It would correlate the finding with the scan results of the image and with the public exposure of the instance (via security groups, ACLs and other cloud specific network controls) and mark it as critical since IMDSv1 is enabled on the instance.

Suppose there is a cloud application developer in charge of the availability and backups of a production RDS database used by the cloud-native application. As part of their job, they would need to simulate a restore of the database from a snapshot. For that, they ask DevOps to create an IAM user with access keys, with permission to manage RDS snapshots.

After successfully testing the database recovery, the developer would end up with an unused access key lying stale in his workstation. As is the case with access keys, no modern controls can be applied to protect the authentication (such as multi-factor authentication).

In order to copy the database to the adversary-controlled AWS account, the adversary will first create a DB snapshot, using AWS CLI:

The response will contain the ARN of the adversary’s controlled KMS key. Once that is done, they can create a copy of the snapshot that is encrypted with the KMS key under his control

Once the RDS snapshot is shared with the adversary account, encrypted with a KMS key controlled by the adversary can recreate the entire database in their own account.

What would posture control do?

Zscaler Posture Control would identify risky data access (to the RDS snapshots) enabled by the access keys. It would also correlate with usage information and highlight the risk of unused access keys as critical.

In this section, we will highlight some of the immediate prevention steps a security admin could take to mitigate the threat described in the use cases above. These best practices are built in and available as part of Zscaler Posture Control.

Data breaches, vulnerabilities, and security violations continue to rise. As a result, enterprises undergoing digital transformation or building new cloud apps must streamline security processes. In order to avoid the high cost of remediating security and compliance violations or application vulnerabilities in production—or worse, recovering from a breach—it is beneficial to proactively identify and remediate security weaknesses and vulnerabilities. A unified, cloud-native security platform like Zscaler Posture Control is designed to identify, prioritize, and remediate the most critical cloud security risks. Zscaler Posture Control serves as a single source of truth across the cloud infrastructure, gathering telemetry from all environments and correlating risk and threat data to give better risk insights and maximize the effectiveness of the security team.