A Day of Service in Honor of MLK

“Life’s most persistent and urgent question is: ‘What are you doing for others?’”

Every year in mid-January, my daughters and I have an adventure. In the early years, it was picking up trash with other volunteers at a local park, but as they’ve grown, so have the tasks. Two years ago we planted trees at a local park. Last year, we helped clear and plow hard-packed soil to create a 100’ x 8’ community planting bed as a part of a church’s “Dream” garden. This year, in addition to donating to Dorcas ministries (link below), we are building hygiene kits for uninsured Wake County residents. It is climate-controlled and much cleaner than past projects, but still impactful. And whatever we do, it’s always rewarding. 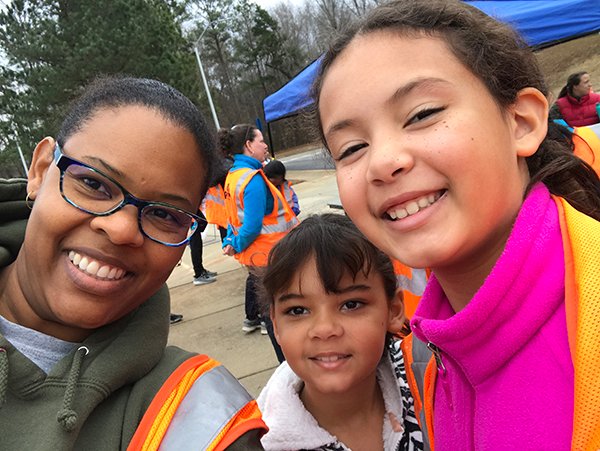 As we celebrate Martin Luther King’s birthday this year, there is a different kind of urgency than I’ve felt in years past. We are all facing challenges in the wake of the pandemic, with concerns about our own health and that of our loved ones, as well as the need to juggle work responsibilities with caring for children at home. With so much upheaval, it’s tempting to hunker down and simply try to get through it.

But difficult times are exactly when those of us with the good fortune to have our health, a home, and stable jobs should come together to help the most vulnerable members of society. Across the country, communities that were already struggling with low wages, high poverty rates, and food and housing insecurity have been hit particularly hard by the pandemic.

As a member of Zscaler’s new Black networking group, [email protected], I’m proud to announce that [email protected] is leading a day of service on Monday, January 18, in honor of Dr. Martin Luther King, Jr.’s birthday, and we are inviting all United States Zscaler employees and their families to participate. Regrettably, it won't be in person this year, but we look forward to widespread participation as the needs are tremendous. The [email protected] team has identified six organizations we are encouraging employees to “shop” for or donate to. They include:

Dr. King’s life’s work centered around giving a voice to the voiceless and, in that spirit, we hope to share our good fortune with others. We also hope to celebrate his life by offering a broader sense of his legacy and an opportunity to learn more about him.

Many Americans know Dr. King for one speech he delivered in August 1963. It was truly great and consequential, but it was just one of more than 2,500 speeches King delivered in his 13 years of public life. He wrote five books and his papers are preserved in seven volumes.

America’s most influential advocate for peace and justice, Dr. King campaigned, protested, and preached on behalf of people who had been marginalized by those in power. He was deeply committed to nonviolence, but he pushed hard against laws that he believed were unjust and was arrested repeatedly. He was a skillful strategist and teamed with powerful thinkers and doers who coordinated the complex and dangerous Civil Rights Movement.

With his father, Dr. King was the co-leader of Ebenezer Baptist Church in Atlanta, which gave him his first platform for addressing social ills. He spoke against the Vietnam War, segregation, and the mistreatment of poor people, regardless of color.1,2  He formed alliances with politicians, including Robert F. Kennedy, whose support enabled his release from prison during one of his many arrests.3 He engaged with leaders, including Malcolm X and Billy Graham, from other religions and social standings to advance his ideals. He didn't always find support, but he was willing to give others an opportunity to be on the right side of history.

Whether he was sitting at a “whites-only” lunch counter or leading a peaceful march or demonstrating for voting rights, Dr. King was seen as a threat to the American status quo.4 He was arrested at least 30 times in various civil rights protest actions.3,5  Here are some examples6:

Dr. King was instrumental in the successful actions of multiple civil rights groups, including the National Association for the Advancement of Colored People (NAACP). And in the mid-1950s, the Montgomery Improvement Association (MIA) was formed with the executive committee of the NAACP and the officers of the Montgomery chapter of the NAACP (which was banned at that time in Alabama) to improve the living conditions and end segregation in the city.

Rosa Parks was the secretary of the local organization, and her defiance on the bus gave Dr. King, the leader of the MIA, a wider platform that extended beyond the church congregation he led at the time.7

The steward of King’s legacy

A theme in the musical Hamilton is that one has no control over “Who lives, who dies, who tells your story.” And just as Elizabeth Hamilton became the champion of her late husband’s legacy, Dr. King's widow, Coretta Scott King, worked tirelessly through the remainder of her life (she survived him by almost 40 years) to ensure her husband's legacy wasn't tarnished by those who did not share his vision.

Because of Coretta Scott King’s efforts, we celebrate Dr. King’s birthday as a federal holiday and his story is told to schoolchildren across America. While his life has been filtered and packaged in many ways to adapt to various audiences, we know that when history is being made, it isn't always neat and tidy. Undeterred in the face of threats, setbacks, arrests, and violence, Dr. King knew that “forward” was the only way to go and that, ultimately, the arc of the moral universe would bend towards justice.

Dr. King’s efforts continue to inspire new generations of organizers and activists in pursuit of justice and equality, and his commitment to nonviolence provides a roadmap for societal changes.

Three facts about Dr. King you may not know:

1. King’s birth name was Michael, not Martin. The civil rights leader was born Michael King Jr. on January 15, 1929. In 1934, however, his father, a pastor at Atlanta’s Ebenezer Baptist Church, traveled to Germany and became inspired by the Protestant Reformation leader Martin Luther. As a result, King Sr. changed his own name as well as that of his 5-year-old son.10

2. King entered college at the age of 15. King was such a gifted student that he skipped grades nine and 12 before enrolling in 1944 at Morehouse College, the alma mater of his father and maternal grandfather. Although he was the son, grandson, and great-grandson of Baptist ministers, King did not intend to follow the family vocation until Morehouse president Benjamin E. Mays, a noted theologian, convinced him otherwise. King was ordained before graduating college with a degree in sociology.10

3. King received his doctorate in systematic theology. After earning a divinity degree from Pennsylvania’s Crozer Theological Seminary, King attended graduate school at Boston University, where he received his Ph.D. degree in 1955. The title of his dissertation was “A Comparison of the Conceptions of God in the Thinking of Paul Tillich and Henry Nelson Wieman.”10

I am grateful to be a part of the Zscaler family, working among kind, compassionate professionals all across the organization. My [email protected] team members and I look forward to a successful and rewarding day of service in celebration of Dr. King’s life and legacy.

1From MLK to John Lewis, Ebenezer Baptist Church has been a haven for civil rights (nbcnews.com)

Zscaler Is Proud to Be a 2023 Great Place to Work!

Securing a World of Possibility

Breaking Barriers and Reflecting on Representation at AfroTech 2022

"Growing together, secured" was the motto of the EMEA Partner Summit