Updated 1/19: we have updated charts and the narrative to reflect all of 1/18 (protest timeframe) data and the first 10 hours of today. The last graph shows about a 365% increase in visits to their SOPA Initiative page and >77% increase across SOPA related page visits during the protest - this visually shows the success of Wikipedia's protest in which it is successfully spreading their message and educating visitors on SOPA. The middle graphs visually show an increase in unique visitors, while the number of transactions per visitor decreases throughout the protest - a phenomena that we have called "online rubber necking," in which visitors are there to see the protest page and perhaps inform themselves about the issue but are not accessing the site in the "normal" manner in which many more pages/media files are accessed.

If you want a quick way of increasing traffic to your website - change or take down portions of your website in protest ... at least that is what we have gleaned from today's (1/18) Wikipedia protest against SOPA. There will likely be other blog posts and stats released on the results of this and other cyber protests - here is what we have seen from traffic thus far that has passed through one of Zscaler's clouds.

We observed a noticeable percentage increase in the unique visits (by client IP address) to Wikipedia comparing the protest timeframe to the surrounding dates: However, these additional visitors are not incurring that much more bandwidth for Wikipedia - we have noticed only a slight percentage increase in Wikipedia web transactions today. See the chart below to see the slight increase in number of transactions per hour:

We can combine the two above graphs into a graph of transactions per unique visitor, and we see that this is much smaller today. This suggests that more people are flocking to Wikipedia today, but just to see the protest page and some details on SOPA. This behavior could be described as "online rubber necking". 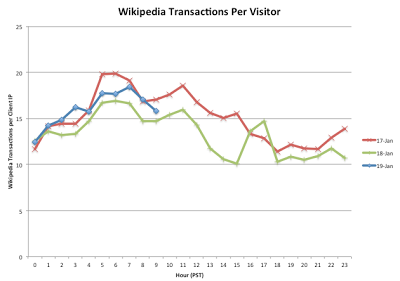 We observed significantly more visits to Wikipedia's main page and SOPA Initiative page than the surrounding dates - further corroborating our above statements:

From the above stats we are able to visually represent the Wikipedia protest and the Internet community's "rubber necking" behavior in which the number of visitors increase but the transactions per vistor decreases. While not the goal of Wikipedia's protest, from a media and public relations standpoint these types of Internet events can stand to be beneficial or even lucrative. This last graph shows a large volume of people checking out the protest page. However, there too was about a 365% increase (going from about 16% to 75% of the visits) in visits to their SOPA Initiative page and >77% increase (going from about 9% to 16% of the visits) across SOPA related page visits during the protest - this visually shows the success of Wikipedia's protest in which it is successfully spreading their message and educating visitors on SOPA. I would expect that this may be a sign of the times to come given the successful results of the protest on the Internet and that the message was received on Capitol Hill (reference on which Senators dropped support for SOPA).