There's no doubt that ransomware is one of the most popular malware threats of 2014. Zscaler is not alone in this opinion, as other security firms have observed up to a 700% increase in infection rates to ransom-like malicious activity on victim PCs.  It's no wonder the attacks are so effective when for example, the delivery mechanism is designed to impersonate a legitimate service such as a harmless eFax.
Ransomware attacks can be monetized quickly and efficiently without the need to create a large scale botnet or expose the attacker's affiliate ID via click-fraud schemes. We've seen multiple attack vectors leveraged to target end users. Some vectors we have monitored include phishing email links or a malvertising campaign which leverages exploit kit distribution. Attackers will often pose as legitimate services, such as a law enforcement agency or a mass media outlet, in order to lure the unsuspecting victim into their scheme.

We recently encountered a ransomware campaign leveraging phishing e-mails purporting to be from the Australian Postal Services. The spam campaign themes used by the attackers involve tracking services or mobile invoices containing a link to the malicious content.  Upon completion of a CAPTCHA, the user is provided a zip file which contains a malicious executable posing as a PDF document. 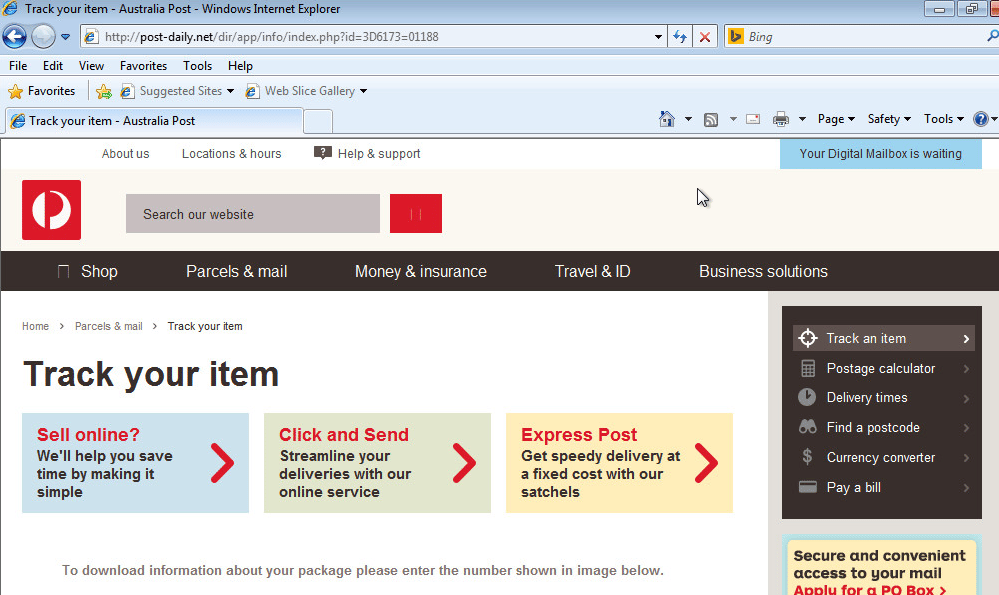 At the time of research, this particular file shows a a detection rate of 16/53 antivirus engines on Virustotal. Before the victim even has a chance to realize their mistake, they are greeted by a message informing them of just how impacted they are.

The goal of Cryptolocker or any other Crypto-Ransomware attack is to encrypt personal files and hold them hostage. The attacker encrypts the files using a specific key which is either obtained during the phone home request to a Command & Control (C2) server, or hard-coded within the malicious executable. In  this case, the malicious executable itself is falsely presenting itself as a valid executable for AQQ IM.
Cryptolocker's encryption has been an evolving piece of this threat, often relying on asymmetric encryption to lock the victim's files.  In this particular version, the Cryptolocker variant targeted the following folders for encryption:
The threat will also drop a file in the Windows directory and an associated registry key to launch the file upon boot.  This will ensure that the threat will remain persistent if the victim attempts to reboot their system.


Cryptolocker will phone home to a hard-coded malicious domain via SSL. The SSL certificate is signed using the printable string 'debian'. This transaction is the secure communication which will provide the specific key needed to encrypt the victim's files.

Decrypted SSL traffic reveals the initial call back attempt that contains a POST request with victim's machine name and unique ID as seen below:
This variant was found to be using a Domain Generation Algorithm for the C2 server communication, similar to the phone home method of Zeus.GameOver.


These domains are largely returning 504 errors now as they have either not yet been registered or have already been shutdown.  A few do were still live at the time of the research.  Zscaler inspected the associated IP addresses and found them to be hosted in the Russian Federation. The two server IP addresses of note at the time of the blog are 46.161.30.20 and 46.161.30.19.  Active ransomware URLs leading to these servers include:Conclusion

Administrators should be on the lookout for the above connections as they likely indicate a compromised system. Given how prevalent this threat is, the U.S. Government recently released an associated alert on the US-CERT site.

Taking regular backups of your personal files remains a user's best chance at mitigating the threat if they have been hit by this attack. It is also important for system administrators to enforce  strict file-type access control policies surrounding the download of archive and executable files from unknown sources.