A Look At The New Gameover Zeus Variant

Zeus, also known as Zbot is one of the most notorious and wide-spread information stealing banking Trojans. It was first spotted in early 2007 and since then over the years it has evolved into a very sophisticated malware family with such features as: In June 2014, the U.S. Justice department launched an international law enforcement operation dubbed 'Operation Tovar'  to take control of the Gameover Zeus P2P Botnet. This operation turned out to be a success with the shutdown of the Botnet activity and related Cryptolocker infection cycle.

We started seeing infection reports involving a new Gameover Zeus variant early last month (July 2014). The major infection vector still remains the same where the Cutwail Botnet is being leveraged by the cyber-criminals to send out spam e-mails with a malicious attachment. The malicious attachment on most occasions masquerades as a financial PDF document in order to lure an unsuspecting user into opening it. This is achieved by a combination of a fake PDF icon and double file extension as common file extensions are hidden by Windows unless disabled by the user. Some sample filenames we have seen includes:
Once the user opens the attachment, it downloads the latest Gameover Zeus variant from a predetermined location as seen below in the unpacked payload memory:
The downloaded Gameover Zeus variant further drops a copy of itself and runs it as: It also drops and runs a batch file to delete the original executable file from the %TEMP% directory:

"C:\WINDOWS\system32\cmd.exe" /C "C:\DOCUME~1\zuser\LOCALS~1\Temp\MLZ6405.bat" @echo off
:akkaoz
del /F /Q /A RSHAIL "C:\Documents and Settings\zuser\Local Settings\Temp\mss3.exe" >nul
if exist "C:\Documents and Settings\zuser\Local Settings\Temp\mss3.exe" goto akkaoz It creates the following registry entry to ensure persistence upon system reboot: The bot further injects code into multiple system processes including Explorer.exe. It creates a remote thread that is responsible for running the Domain name Generation algorithm and connection to the Command & Control (C2) server. Upon successful connection to a C2 server, the bot will download the latest configuration containing list of banking URLs and web-inject plugins. Below is the list of sample domains that were generated by the DGA thread:
It also enumerates through all the running processes and steals information from them if any of the following strings are present: 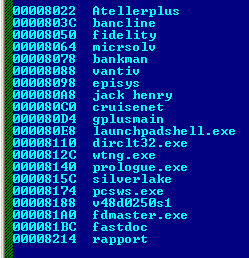 The previous Gameover Zeus variant used a P2P command and control protocol in addition to a failover domain generation algorithm (DGA), to establish connection with a C2 server. However, this newer variant does not feature a P2P command and control protocol, instead it is falling back to the old DGA with fast flux tactics to hide the C2 servers. This in our opinion is a step backward as P2P was a more resilient feature.

Another step backward that we observed is the absence of the kernel-mode rootkit that was pushed out as an update early this year by the Gameover Zeus operators in the previous version. The rootkit made removal of the malware extremely difficult and disabled multiple security features on the infected system.

The bot's DGA outputs 1,000 new unique domains each day but the Gameover Zeus operators are keeping the domains that they intend to use confidential until a few hours before the actual day when they get registered. Below is the mapping of DGA domains that were registered by the the Botnet operators and were actively resolving to C2 servers in past seven days: Command and Control server IP information and Geo-distribution map: 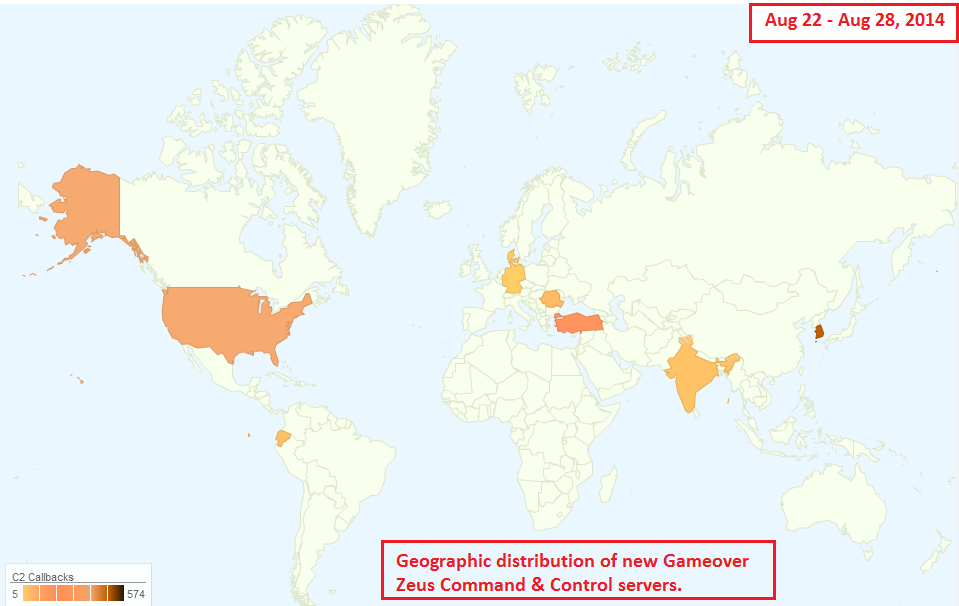 Below is the trend of C2 callbacks we have intercepted in past seven days: 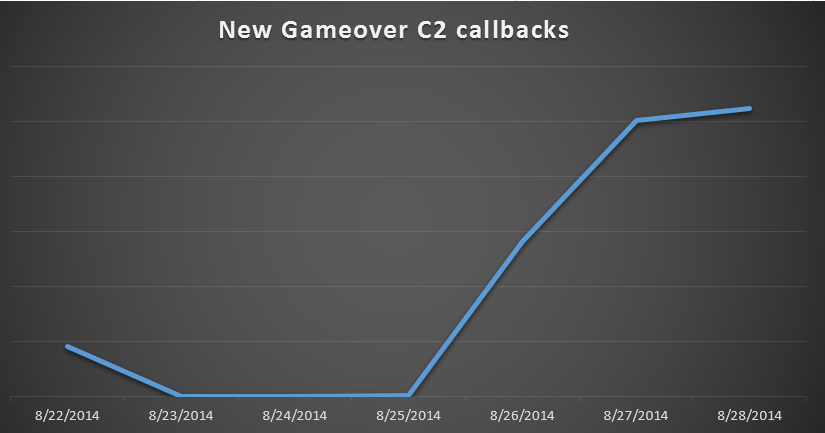 One of the most active C2 server IP addresses also appeared to be the Control server for a Zeus in the mobile (Zitmo) variant in the past as seen below: 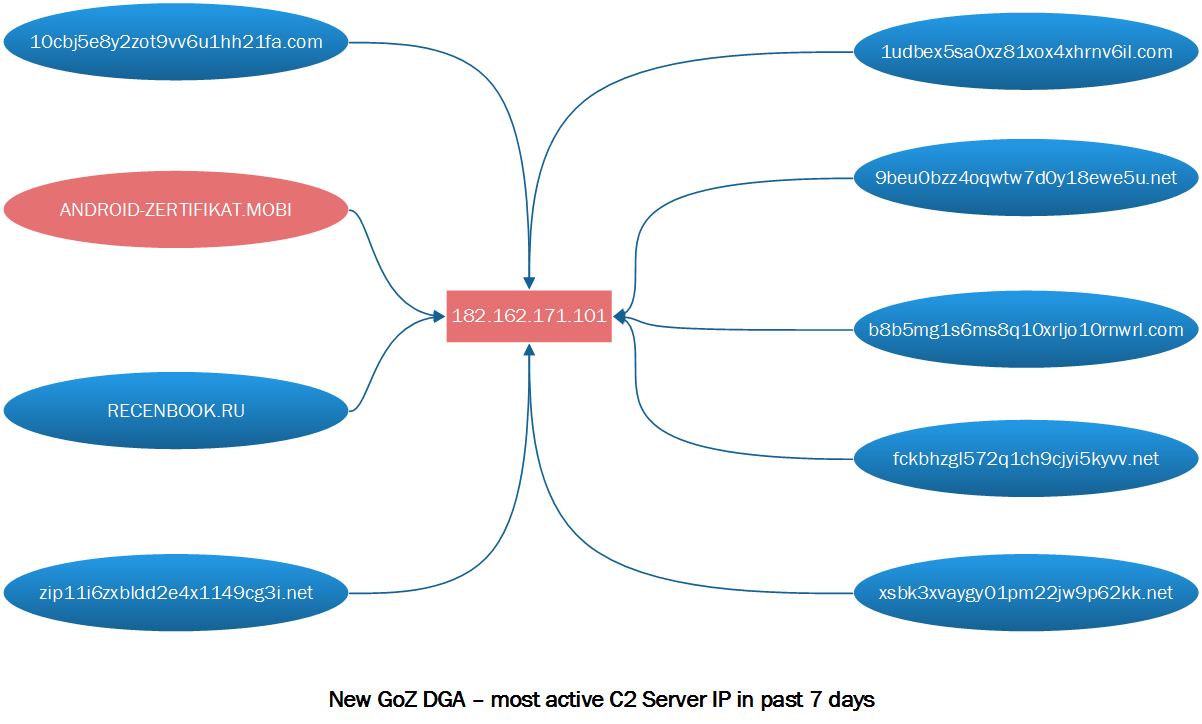 This further re-affirms the fact that the same gang is involved.

This new Gameover Zeus variant certainly appears to be the beginning of a comeback attempt for this notorious Banking Trojan Botnet family, but in many ways it has been a step backward. The number of infections are still very low and it has a long way to go to reach the infection rates observed prior to the Government takedown. Zscaler ThreatLabZ will continue to monitor the activities of this Botnet family in the coming months for active C2 servers as well as any feature updates and will ensure protection for customers.