GNU Bash is susceptible to an arbitrary code execution vulnerability (CVE-2014-6271) dubbed as Shellshock. The vulnerability is due to failure to properly handle environment variables.

A public advisory was released regarding this vulnerability here:

Within hours of the public disclosure of this vulnerability, we have started seeing incidents of attacks targeting this vulnerability in the wild to download additional malware. It appears that Nginx and Apache web servers configured to use mod_cgi are two potentially vulnerable services that are actively being targeted in the wild. One such incident that we were able to confirm through mining our logs is shown below:

The server involved in the above case was found to be compromised and hosting ELF binaries which belongs to the same Linux Backdoor Trojan family with DDoS capabilities. We believe that the vulnerable Apache servers were resulting in the download of an ELF binary named "apache" whereas vulnerable Nginx servers were getting the ELF binary named "nginx". The only difference we saw in these two binaries was the hardcoded Command and Control server information.

Upon successful exploitation of CVE-2014-6271 vulnerability, the attacker is able to download and install the malicious ELF binary on the target Linux system. The malware connects to a predetermined Command and Control (C2) server on a specific port and awaits further instructions from the attacker. The C2 information can be seen hardcoded in the binary: 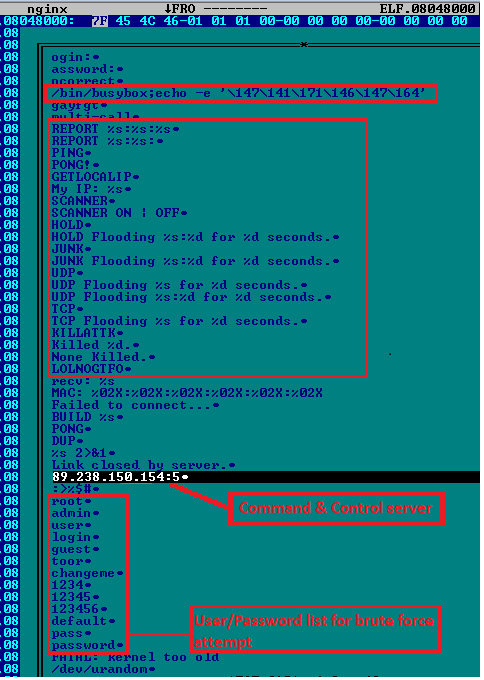 This malware family is capable of performing the following actions:

The screenshots below show sample command and control communication from this bot:

Below is a sample list of suspicious headers that we captured in past 12 hours attempting to exploit the Shellshock vulnerability (CVE-2014-6271). While majority of these appear to be testing attempts, some of them look malicious.

Check if your server is vulnerable:

It is extremely important for the system administrators to apply appropriate security patch depending on the Linux distribution they are running. Below is a code snippet posted by Redhat that you could use to determine whether your BASH version is vulnerable or not:

env x='() { :;}; echo vulnerable'  bash -c "echo this is a test"
Conclusion
We rate the severity of this vulnerability to be as critical as that of Heartbleed vulnerability discovered earlier this year. We are still investigating the level of impact associated with this threat.