I searched the web recently looking for statistics on the average number of web transactions that end-users make per day, and equations for estimating end-user web transactions. I couldn't find anything that was worth repeating, so I ran my own numbers from Zscaler data.

First, a quick note on what I'm defining as a web transaction- all HTTP(S) client requests / server responses. Some web pages have a large number of web transactions associated with a single web page, for example, the cnn.com homepage has 127 transactions:

I took a random sampling of 100,000 users (excluding group accounts and inactive users) for a 24-hour period on a non-holiday mid-week day. These users are from a global population of enterprise users that typically work an 8-10 hour day. I set a minimum threshold of 500 transactions for an account to be considered an active user - those with less than 500 transactions could be system-driven versus user-driven transactions (e.g., Windows Update), part-time workers, or temporary/test accounts.

The average for this data sample was:
3343.80227 web transactions per user per day 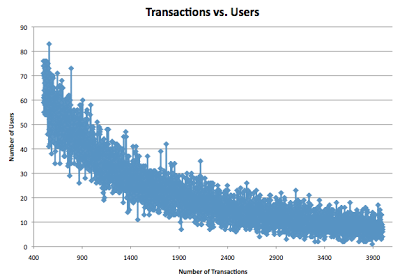 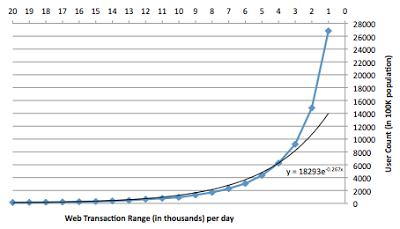 The black trendline that was generated in Excel from our data was:

To estimate your user population for a specific transaction range, modify the equation to be:

Using this function it is possible to roughly estimate the number of users that have a specific range of transactions (e.g., power web users) within an organization within a 24-hour period.

A relatively small organization of 300 users must deal with an estimated 1 million web transactions in a 24-hour period for their user population. Some estimates of the 2011 Federal Government payroll state a work-force of 1.35 million Federal civilian employees -- this is an estimated 4.5 billion web transactions a day (this does not include Federal civilian contractors).

These types of numbers are good for an organization to be aware of when considering scaling solutions for enforcing web security / policy and for storing and analyzing transactions.