With more than 60 million websites, including 33.4 percent of the top 10 million global websites, built on the WordPress platform, it is big news when a new attack aimed at this popular tool surfaces. And, as you can probably guess, the Zscaler ThreatLabZ team recently noticed another campaign targeting WordPress sites.

In this blog, we describe two aspects of this campaign. In the first part, we describe the intelligence information we gathered from this campaign, which was used for threat attribution. In the second part, we explain in detail all the steps used for decrypting the multiple layers of encryption that were used to protect the final payload.

We observed a common pattern shared among all the compromised websites in this campaign, which are used to host the malicious JAR payload. All these websites used the Content Management System (CMS) from WordPress. Attackers often exploit vulnerabilities in WordPress plugins to get access to the admin panel of the CMS. Once the access is obtained, they can host their payload on the server.

The WordPress version can be confirmed by checking the meta HTML tag in the source code with the “name” attribute field set to “generator” as shown below for one of the compromised sites observed in this campaign.

Most of the compromised websites in this campaign were running a fairly recent version of WordPress—5.3.x. Only a few sites were running outdated versions, such as 4.5.x or 3.3.x.

The file names for the payload varied between themes ranging from Coronavirus to payment invoices and shipping delivery services, such as DHL and USPS, as shown below:

On some of the compromised WordPress sites used to host the malicious JAR files, we were able to find PHP web shells that attackers used to control the web server as shown in Figure 2. 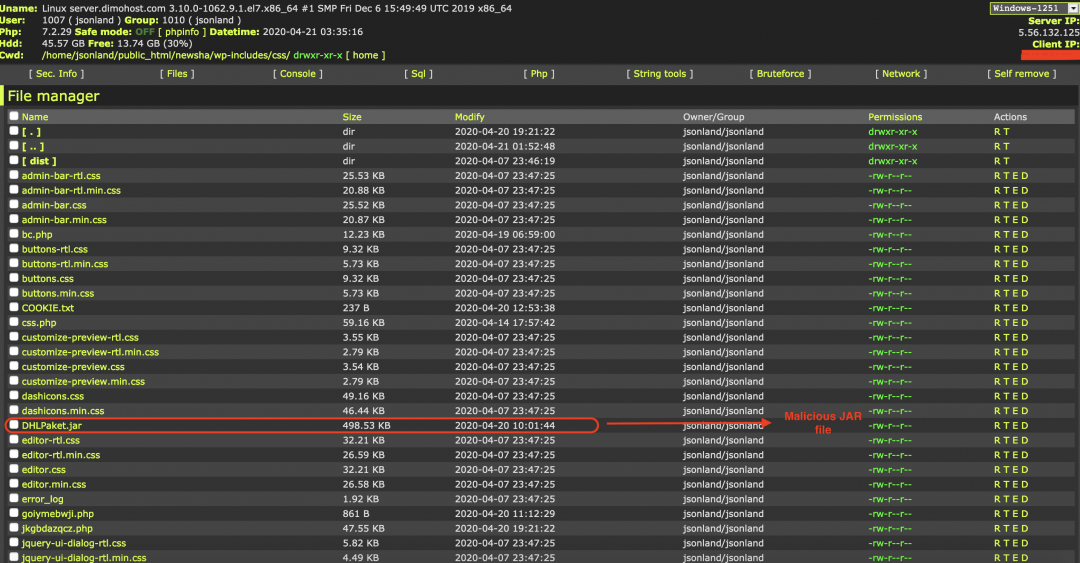 There are some other web shells present in the same directory. After inspecting the different web shells, we located a PHP mailer script that would send a test email to attacker-specified email addresses, as shown in Figure 3.

Technical analysis of the encrypted JAR

There were multiple layers of encryption used in the JAR files in this campaign, which made it clear that some form of crypting service was used by the threat actor to protect the final JAR payload. After decrypting several layers, we found a reference to “Qarallax”, which leads us to believe that the cryptor used can be attributed to the Qarallax crypt service.

In this section of the blog, we will go in to the details of the different layers of encryption and how we unpacked them one by one to reveal the final payload.

Filename of the JAR file: Covid-19Update.jar

These resources will be loaded and decrypted at runtime. To understand the decryption process, let us look at the source code of rr.class present inside this JAR file. This class file is responsible for loading the above resources and calling the decryption routines. The code section is shown in Figure 4 with relevant comments added to the code. 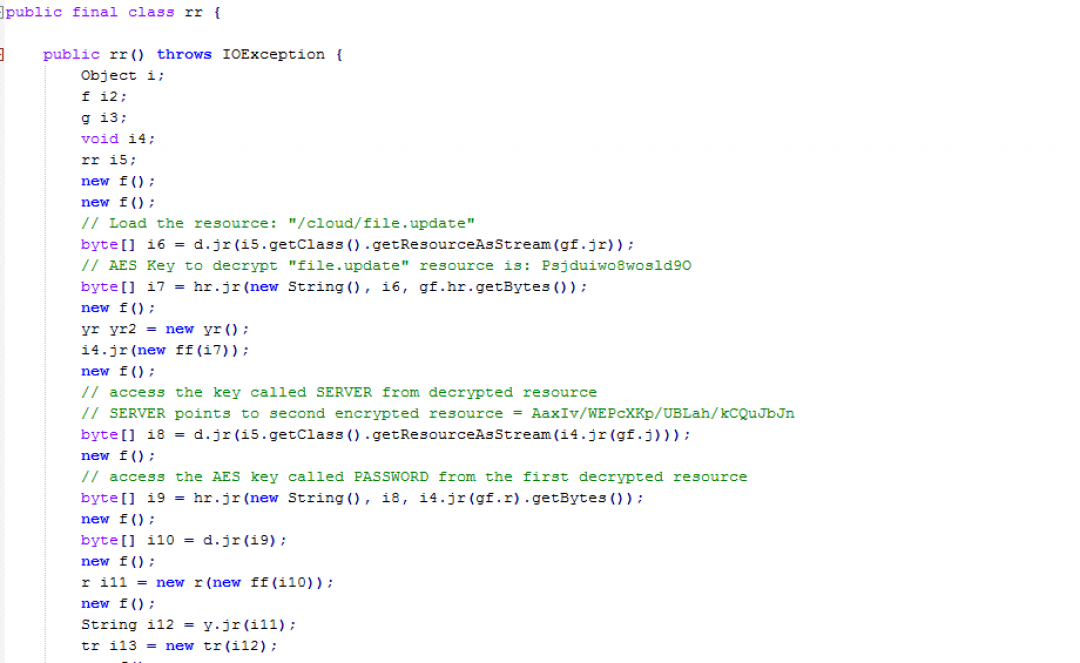 Figure 4: Code for decrypting the resources in stage 1.

It is also important to note that the strings referenced in the above code are defined inside the gf.class file. All these strings are encrypted as shown in Figure 5. 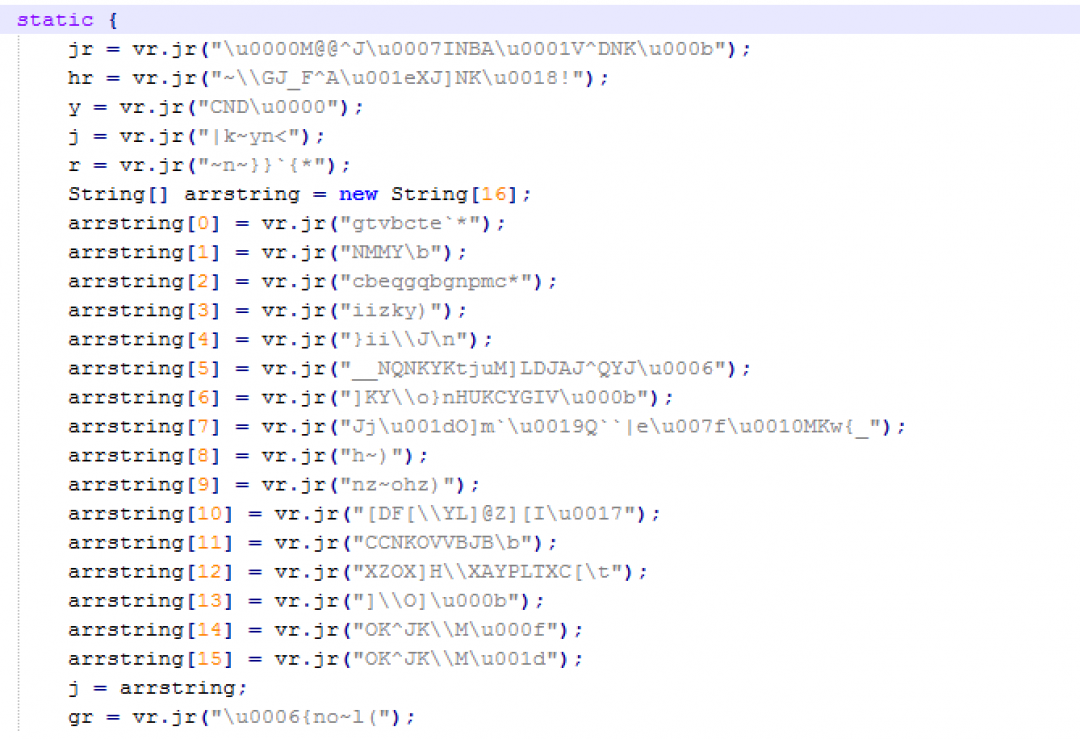 The string decryption routine is shown in Figure 6. 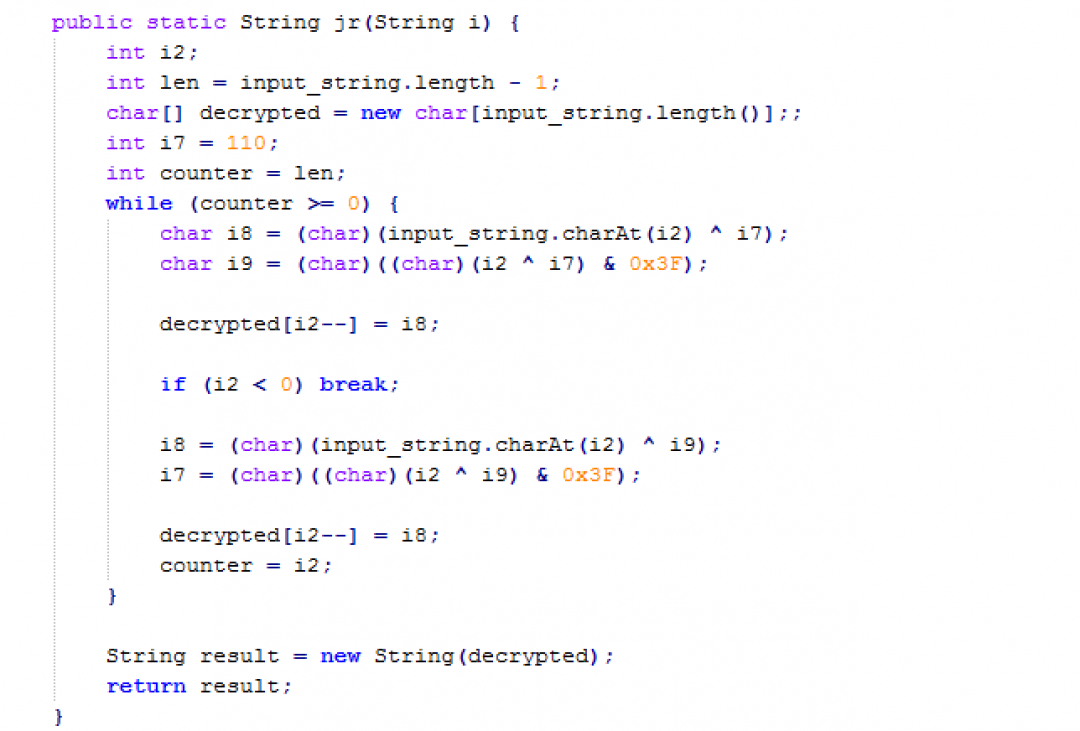 The different steps involved in decryption in above code are:

Figure 7: XML file obtained after decryption. It contains the AES key to decrypt the second resource.

4. This resource is loaded using the loadFromXML() method which allows individual properties from the XML to be accessed to continue the decryption process.

The XML file, which was obtained after decrypting stage 1, is used to decrypt the second layer as defined below.

In this stage, we will look at the decrypted JAR file obtained from stage 2. The class files and resource file structure for this JAR is as shown in Figure 8.

This JAR file has one encrypted resource called “/this/file.grt”.

Execution of this JAR file begins in the method: j2t.ple.IL as shown in Figure 9.

Figure 9: The main method in stage 3.

The strings in this method were encrypted using the same string encryption method as in stage 1. The only difference was in the initial one byte XOR key, which was changed to 0x58.

After decrypting the strings in the main method, we can see a reference to the Qarallax project. Qarallax provides crypting services for encrypting JAR files on underground hacking forums, leading us to correlate this to Qarallax.

Now let us look at the method, Il() defined in il_1.class file. This method performs the resource decryption as shown in Figure 10. 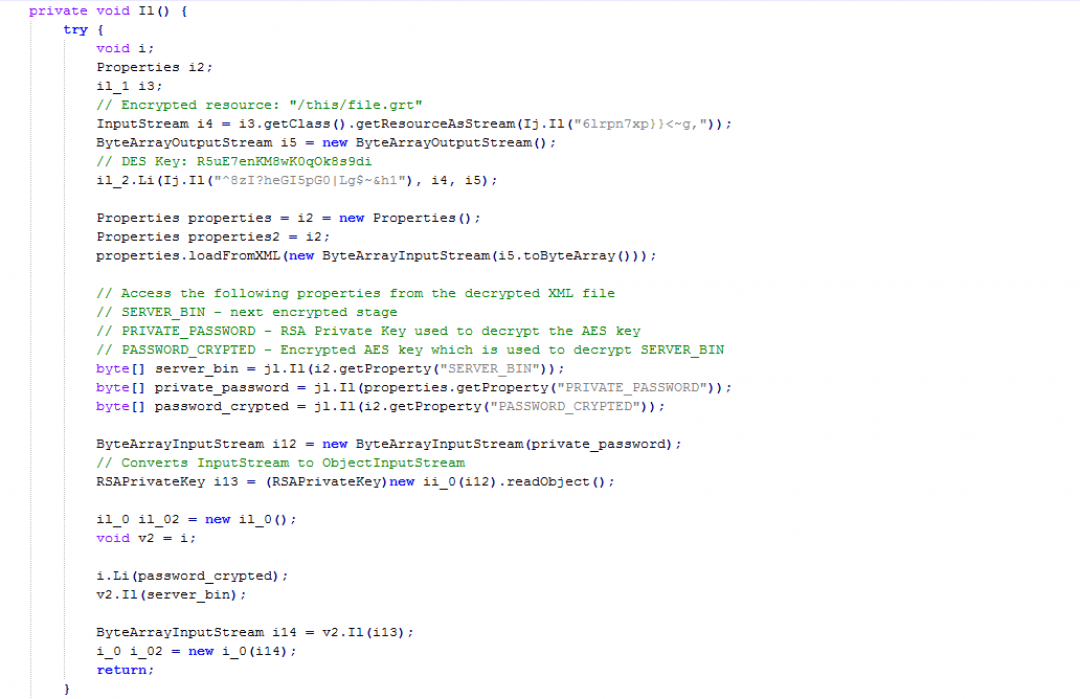 Figure 10: Code for performing decryption of resources in stage 3.

The different steps involved in the decryption are:

Figure 11: The XML file after decryption in stage 3.

5. Each of the above properties are loaded from the XML using loadFromXML() and getProperty() methods.

6. The RSA private key is stored as a serialized Java object. It is unserialized using the readObject() method.

7. The unserialized RSA key is used to decrypt the AES key defined in the PASSWORD_CRYPTED section of the XML.

8. The decrypted AES key is used to decrypt the SERVER_BIN file, which results in the next stage decrypted file.

The decrypted payload obtained from stage 3 is the final JAR payload, which was protected with multiple layers of encryption. The JAR class file structure for this payload is as shown in Figure 12. 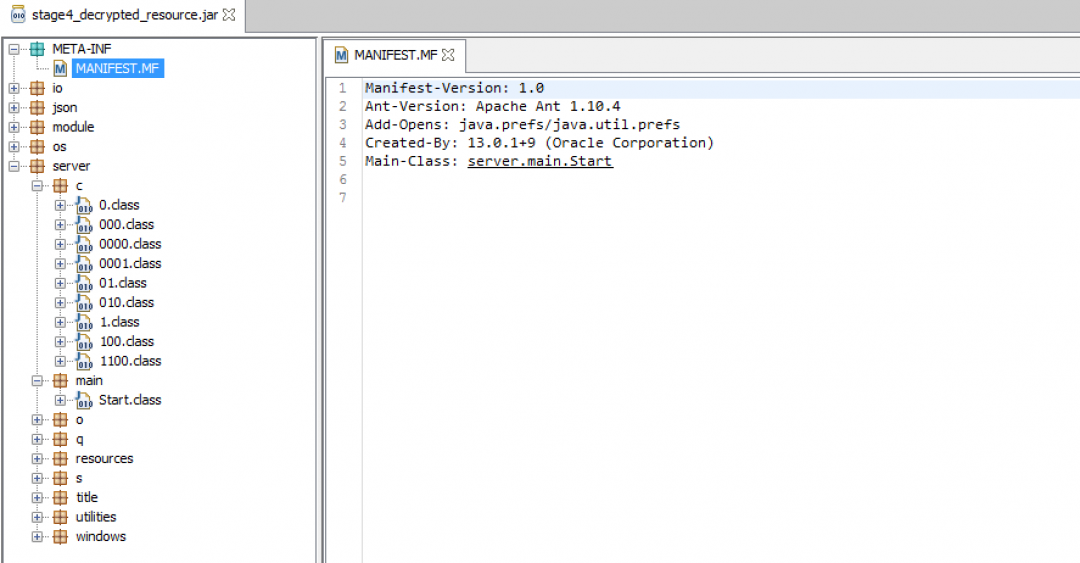 Let us look at the main method—server.main.Start()—of this JAR file. We can see the use of encrypted strings in this JAR file as shown in Figure 13.

Figure 13: The encrypted strings in stage 4.

This string decryption routine is different from the previous stages we analyzed. It is a variant of XOR decryption, which derives the decryption key in an interesting way.

The first two lines of the decryption routine are:

As an example, when the string decryption routine is called by the method "ii" in the class "Start", then the XOR decryption key will be: "Startii".

Upon further analysis, we discovered that this string decryption routine is the same as the one provided by the Java obfuscator called Allatori. Usually class files obfuscated with Allatori obfuscator use the method name: ALLATORIxDEMOxhthr().

However, in this case, the method name was also obfuscated to remove any reference to Allatori.

We rewrote the string decryption routine in Python to decrypt all the strings in this JAR file. The Python script is provided in the Appendix II section of this blog.

After decrypting the strings, the resulting code is shown in Figure 15.

Figure 15: The code after decrypting the strings.

Decryption of the config file

As a first step, we will decrypt the resources to get access to the config file. The steps involved in decryption are:

The resulting decrypted config file is as shown below.

We provide a description of the key fields present in the above configuration file.

Vbox: Indicates whether the presence of VirtualBox should be checked or not.

nickName: This is a unique identifier used while building the RAT. In our case, it is “quarantoes”.

Installation: A JSON that contains key-value pairs describing the location where the JAR file needs to be copied to on the file system.

jreFolder: Indicates the folder where all the files required for running the JAR are stored.

jarRegistry: The name of the Windows registry key used for persistence.

delay: Indicates the number of seconds to delay the execution.

Vmware: Indicates whether the presence of VMWare should be checked or not.

Port: The port number on which the RAT communicates with the server.

Activities performed by the RAT

Below are the main activities performed by the RAT.

The key name is fetched from the config file as well.

This DLL will be loaded and copied to a temporary location on the file system with the file extension, “.xml”. The DLL is then loaded using the System.load() command as shown in Figure 16.

We will not be describing the functionality of this binary in detail in this blog since the final payload is a well-known jRAT (Java-based RAT). 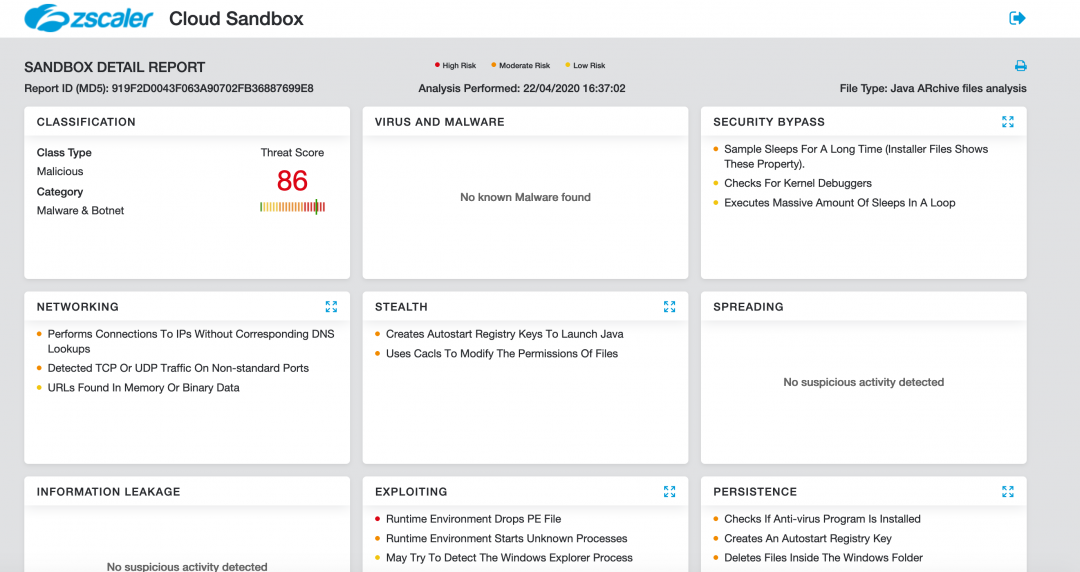 This threat actor leverages compromised websites to serve heavily encrypted variants of a Java-based RAT, which makes the detection difficult over the network.

As an extra precaution, users should not run JAR files from untrusted and unknown sources since JAR files contain executable code and have the capability of infecting a system.

Web administrators who use WordPress installations should ensure that they are running the latest version of WordPress plugins and themes to prevent any vulnerability from being exploited.

Hashes of the samples

# Replace encoded_string with the string to be decoded.

# These are one byte values

# Replace encrypted_string with the string to be decrypted