It is not uncommon for cybercriminals to target specific countries or regions. They often employ this strategy

In April 2020, ThreatLabZ observed several instances of targeted attacks on Indian government establishments and the banking sector. Emails were sent to organisations, such as the Reserve Bank of India (RBI), IDBI Bank, the Department of Refinance (DOR) within the National Bank for Agriculture and Rural Development (NABARD) in India with archive file attachments containing JavaScript and Java-based backdoors.

Further analysis of the JavaScript-based backdoor led us to correlate it to the JsOutProx RAT, which was used for the first time by a threat actor in December 2019 as mentioned by Yoroi.

The Java-based RAT provided functionalities similar to the JavaScript-based backdoor in this attack.

In this blog, we describe in detail the email attack vector of this targeted campaign, the technical analysis of the discovered backdoors, and our conclusions on this attack.

Below is the email that was sent to the government officials in NABARD, which contained a malicious archive file attachment. The email attachment filename is: KCC_Saturation_letter_to_all_StCBs_RRBs_pdf.zip

This archive contains an HTA file inside it that performs the malicious activities.

The theme of the email is related to KCC Saturation, which relates to the Kisan Credit Card scheme and is detailed on the official website of NABARD.

Attackers leveraged this theme because it is relevant to the Department of Refinance, making this email look more legitimate.

We used the email headers to trace the origin to hosteam.pl, which is a hosting provider in Poland as shown below:

The same HTML Application (HTA) file was also sent in an archive attachment to IDBI bank as shown in Figure 2.

Figure 2: The email sent with a malicious attachment to IDBI bank.

Based on the email headers and the infrastructure used to send the previous emails, we were able to identify more instances of these attacks and were able to attribute them to the same threat actor.

Figure 3 shows an email sent to RBI with an archive file that contains a Java-based backdoor. 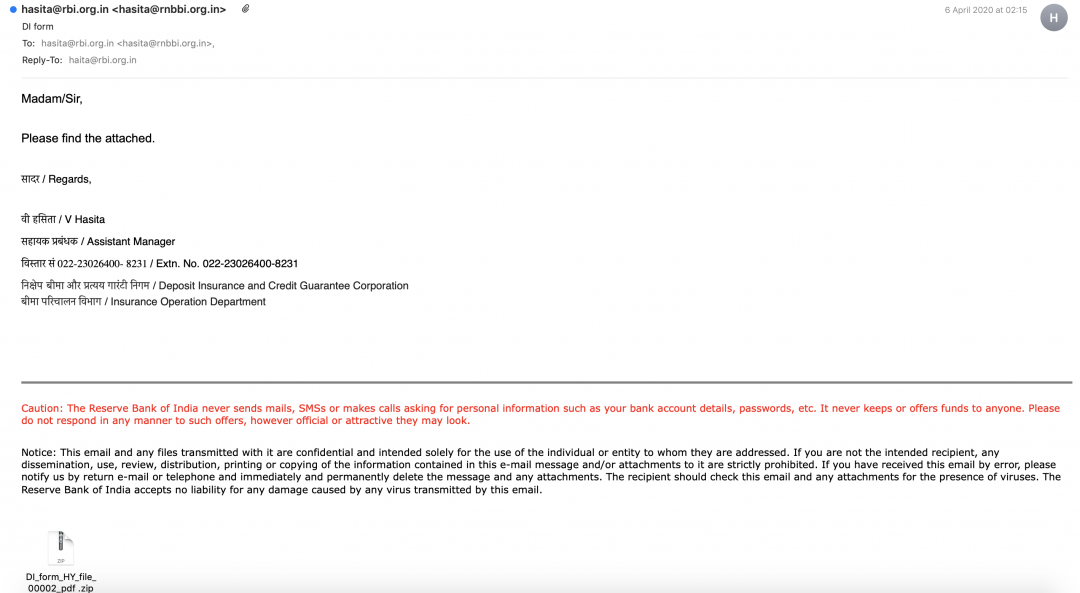 Figure 3: The email sent with a malicious attachment to RBI.

Figure 4 shows an email that was used to send an archive file with a Java-based backdoor to Agriculture Insurance Company of India (AIC).

Figure 4: The email sent with a malicious attachment to AIC India.

The contents of the email are in the Hindi language.

In both of the cases above, the Java-based backdoor has the same hash and only the filenames used were different.

Upon execution, the HTA file displays junk data in a window that flashes quickly on the screen before auto-closing.

This HTA file contains a JavaScript that is executed by mshta as can be seen in the file header in Figure 5.

Figure 5: The HTA header in the file.

There is a long array of encoded strings present at the beginning of the JavaScript as shown in Figure 6.

This array of strings will be referenced throughout the JavaScript. They are base64 decoded and RC4 decrypted at runtime at the time of execution.

JavaScript code in this HTA file is heavily obfuscated as shown in Figure 7.

The string decoding and decryption routines are shown in Figure 8. 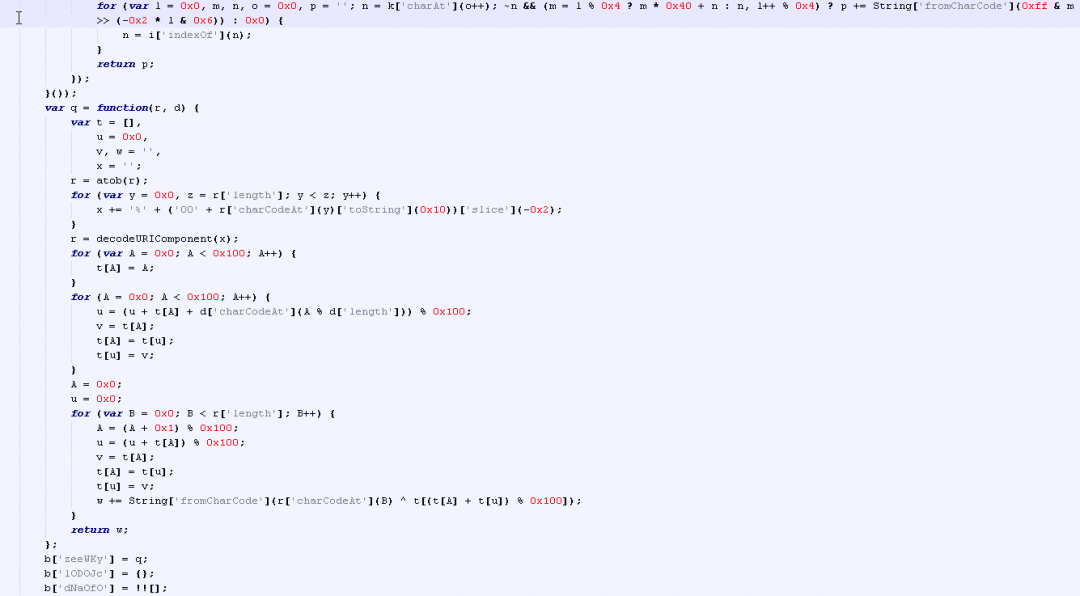 After analyzing the string decryption routine, we can see that RC4 algorithm was used.

The process of string decryption can be summarized in the following steps:

After decrypting all the strings in this JavaScript, we can see the main configuration as shown in Figure 9.

Figure 9: The main configuration file of the JsOutProx backdoor.

Some of the critical parameters in the above config file are:

The script checks whether it is being executed by mshta, wscript or by an ASP Server as shown in Figure 10. Figure 10: Checks for source of execution.

This also indicates that the script has the capability to execute in different environments, including web servers. The first instance of JsOutProx discovered in December 2019 was a JavaScript file. The instance we discovered in April 2020 was an HTA file with the JavaScript code obfuscated and embedded inside. So we are observing this threat actor deploy the backdoor using different methods in the wild.

The script also has the ability to delay execution as shown in Figure 11. 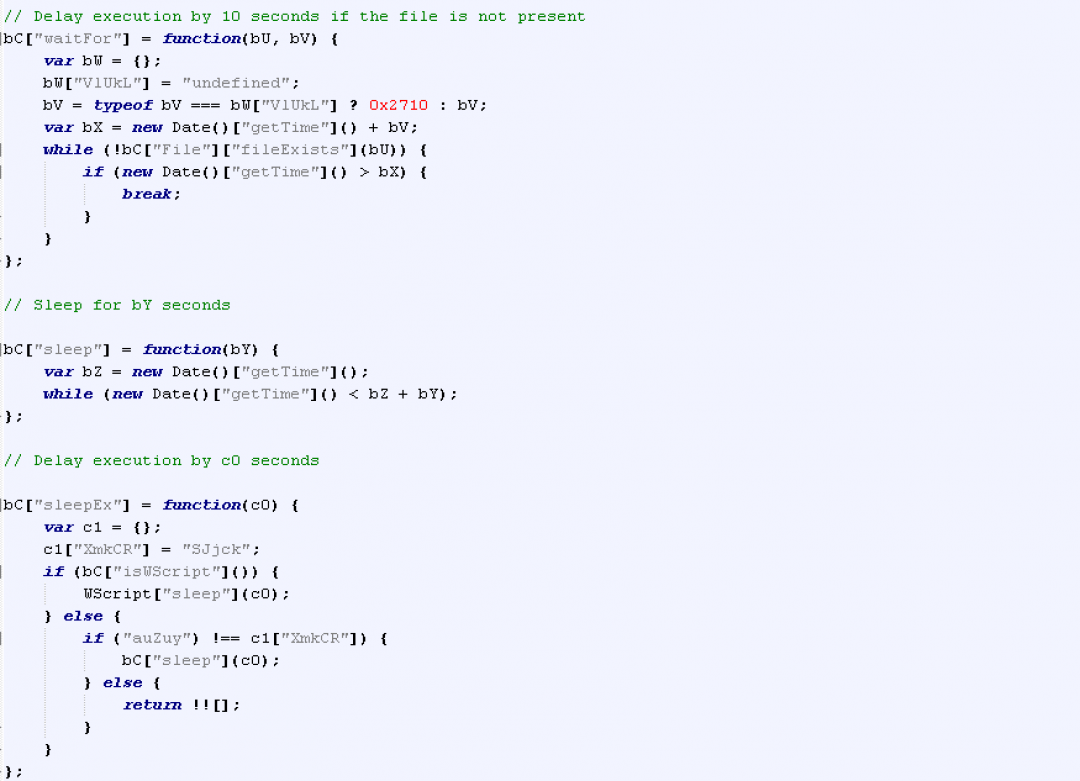 The init() routine is the initialization routine, which gathers different types of information from the system and sends it in an HTTP POST request to the C2 server as shown in Figure 12.

The individual fields collected during init() routine are:

UUID: This is randomly generated using the getUUID function in the script. The format of the UUID used is: xxxxxxxx-xxxx-4xxx-yxxx-xxxxxxxxxxxx

ComputerName: Host name of the machine.

UserName: User name of the machine on which this script is executing.

OS caption: This value is fetched using the WMI query: “select * from win32_operatingsystem” by inspecting the Caption field.

Tag: This is the tag defined in the configuration of the backdoor. In our case, the tag is Vaster.

The last keyword is “ping,” which is added by the receive() method.

All these values are separated by the delimiter “_|_” and concatenated, then hex encoded and set in the Cookie header called “_giks” of the HTTP POST request sent to the C2 server as shown in Figure 13.

The command and control communication between the backdoor and the C2 server is synchronized using the Cookie in the HTTP request and responses.

The last field in the cookie indicates the type of client command.

Then the client command can be identified as:

Figure 14 shows the main subroutine in the code that handles all the commands. The description of the commands are included in the table below.

Technical analysis of the Java-based backdoor There is an AES-encrypted resource present in this JAR file with the name: “jkgdlfhggf.bvl”.

This resource will be loaded and decrypted at runtime as shown in Figure 16.

This resource gets decrypted to another JAR file, which will be dropped in the %appdata% directory on the machine with the name jhkgdldsgf.jar

The dropped JAR file contains all the functionality for this Java-based backdoor. Figure 17 shows the main structure of the JAR file. 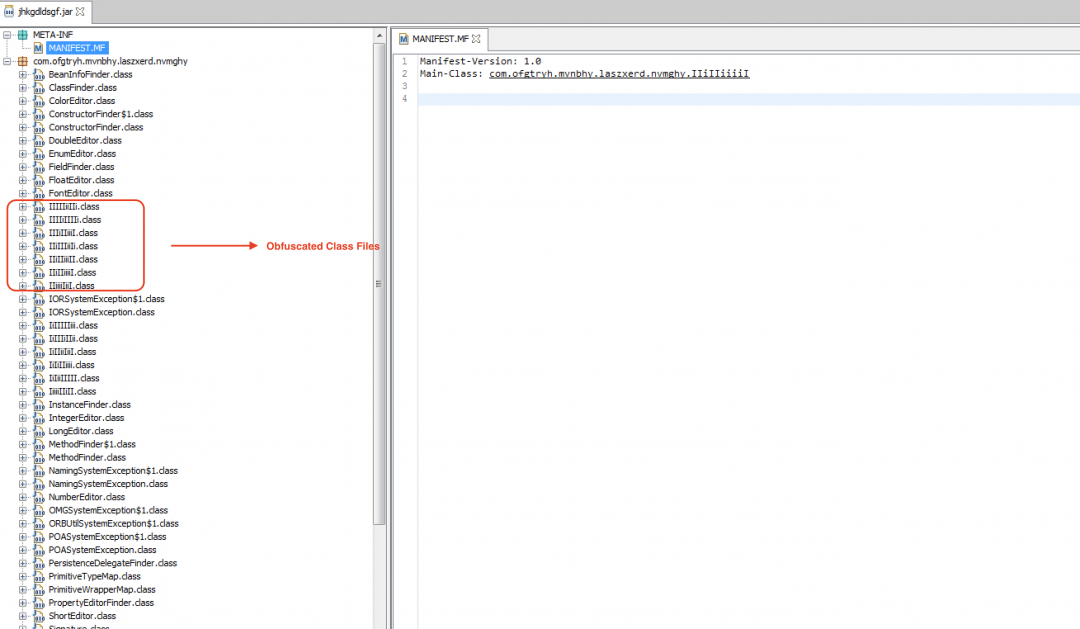 Figure 17: The JAR file structure of the Java-based backdoor.

All the strings in this JAR file are obfuscated by an obfuscator called Allatori. The string decryption routine is as shown in Figure 18.

The JAR file connects to the C&C server: scndppe.ddns.net at port 9050.

This Java-based backdoor is modular in structure and contains several plugins. Figure 19 shows the main network controller code that handles the C&C communication and dispatches the commands to corresponding plugins for further processing. The controller receives the command along with an array of strings that represent the parameters for the corresponding command.

Each of the C&C commands are used to invoke a plugin that executes the command sent by the server.

Now, we will describe two main plugins in this Java-based backdoor and the commands processed by them.

Filemanager plugin: This plugin is responsible for managing all the file system related actions which can be performed by the attacker remotely. The plugin supports multiple commands and the summary is in the table below.

Screen Plugin: This plugin uses the java.Awt.Robot class to perform all the mouse and keyboard simulations on the machine as well as to take screen captures. The commands for this plugin are detailed in the table below.

Persistence: To ensure that this JAR file is executed automatically when the system reboots, a Window run registry key is created as shown below: Figure 20: The Zscaler Cloud Sandbox detection for this Java-based backdoor. Figure 21: The Zscaler Cloud Sandbox detection for the HTA-based backdoor.

This threat actor has a specific interest in organisations located in India and the content of the emails indicates a good knowledge of topics relevant to each of the targeted organisations. The backdoors used in this attack are uncommon, such as JsOutProx, which has only been observed in the wild once before in December 2019.