Following the UK decision to break free from the EU, Zscaler’s cloud platform, which processes over 25 billion requests a day, saw an increase in businesses searching for answers — a 13x spike over the week before.

Shortly after the United Kingdom said Au Revoir to the European Union, Google Trends reported a spike in the UK for the search phrase, “What is the EU.” While it’s surprising that this phrase spiked after the vote and not prior to it, one can suppose that British citizens were preoccupied with the UEFA EURO 2016 currently in full swing. (Scotland, which favored staying in the EU, didn't qualify for the Euro 2016.)

Following the vote, Zscaler, whose cloud security platform secures Internet traffic for many of the Global 2000, reported that more than 13 million articles about Brexit were accessed by people in enterprises trying to understand what it all means. Topping the list of countries accessing the articles were the U.S., UK, France, and Germany. 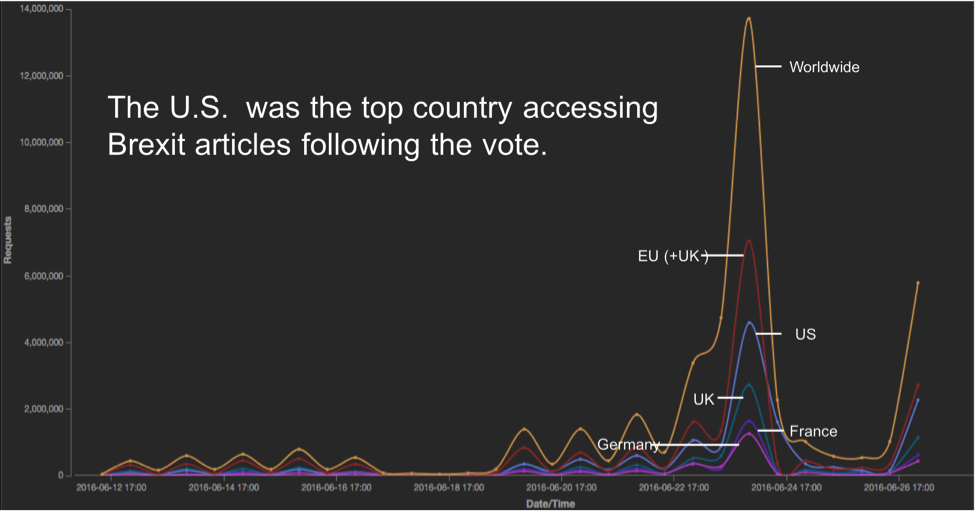 Similar to the UK voters, it seems that a lot of people in organizations around the world were caught unaware of the implications of Brexit and were searching for answers after the vote. The catalyst in this case, however, probably had less to do with the result of the vote and was more likely driven by the ensuing market plunge that saw the world’s currencies hitting lows not seen in many years. With trillions of dollars in U.S. corporate profits sitting overseas, any significant currency swing will draw serious attention.

It is always interesting to see how the world reacts to significant events like the Brexit vote and, of course, England’s stunning loss to Iceland. There are still a lot of unanswered questions, but it seems that the thousands of companies using the Zscaler platform have found what they needed — and as they did, Zscaler protections kept them safe.