CVE-2021-44708 is a heap overflow vulnerability due to the insecure handling of a maliciously crafted file, potentially resulting in arbitrary code execution in the context of the current user. The exploitation of this issue requires user interaction in that a victim must open a malicious file.

The vulnerability can be triggered by opening a malicious PDF file and exporting it to a Microsoft Word document. Zscaler ThreatLabz created a PoC file that will cause the following crash. To reproduce this issue, the following steps can be performed: 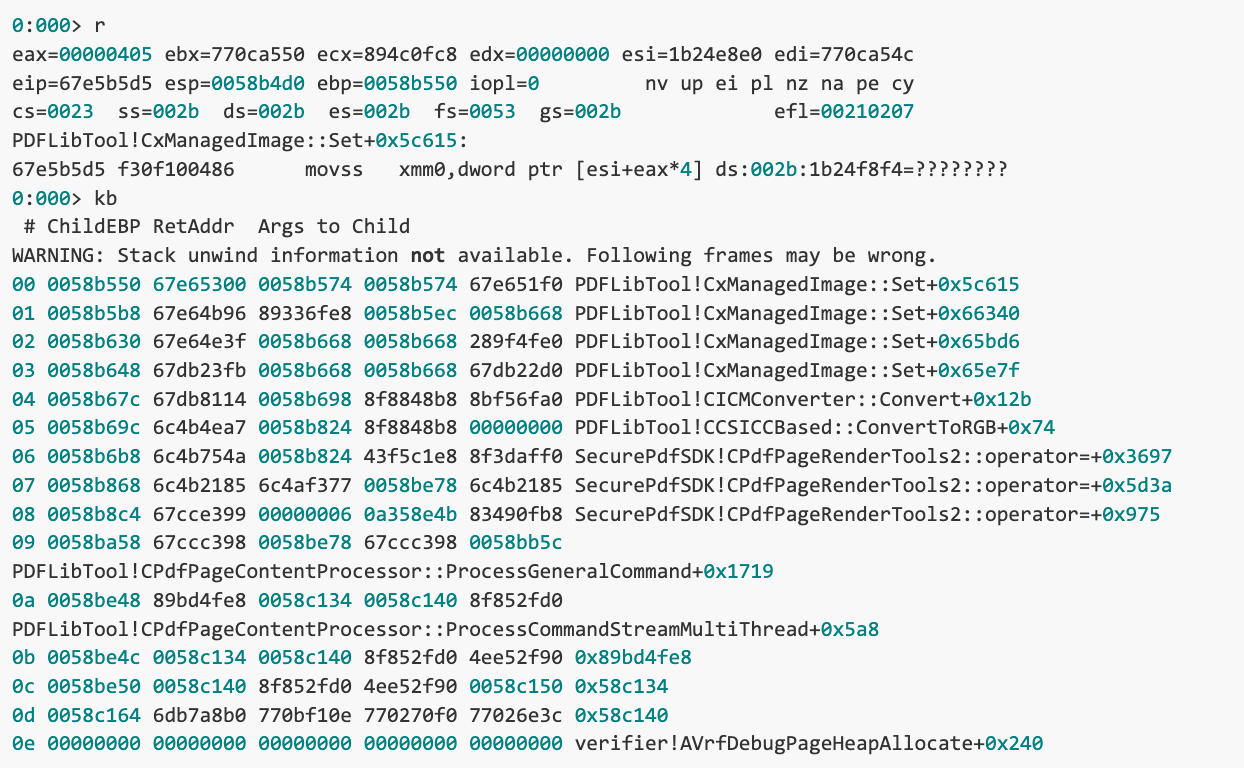 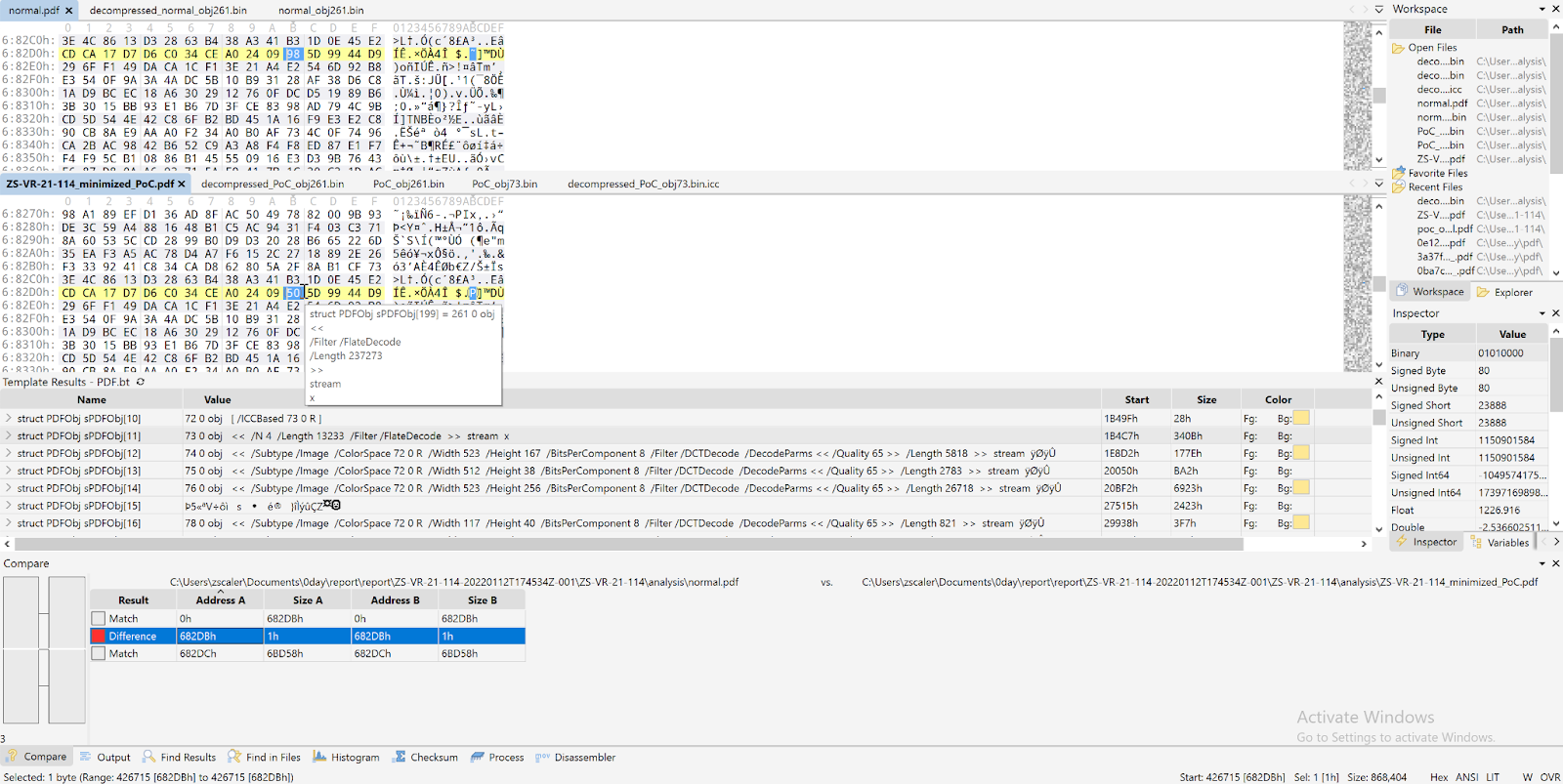 Figure 1. Comparison between a normal PDF file and the minimized PoC file that triggers CVE-2021-44708

As shown in Figure 1, the single modified byte is located in obj 261. The structure of the minimized PoC PDF file is shown below in Figure 2. 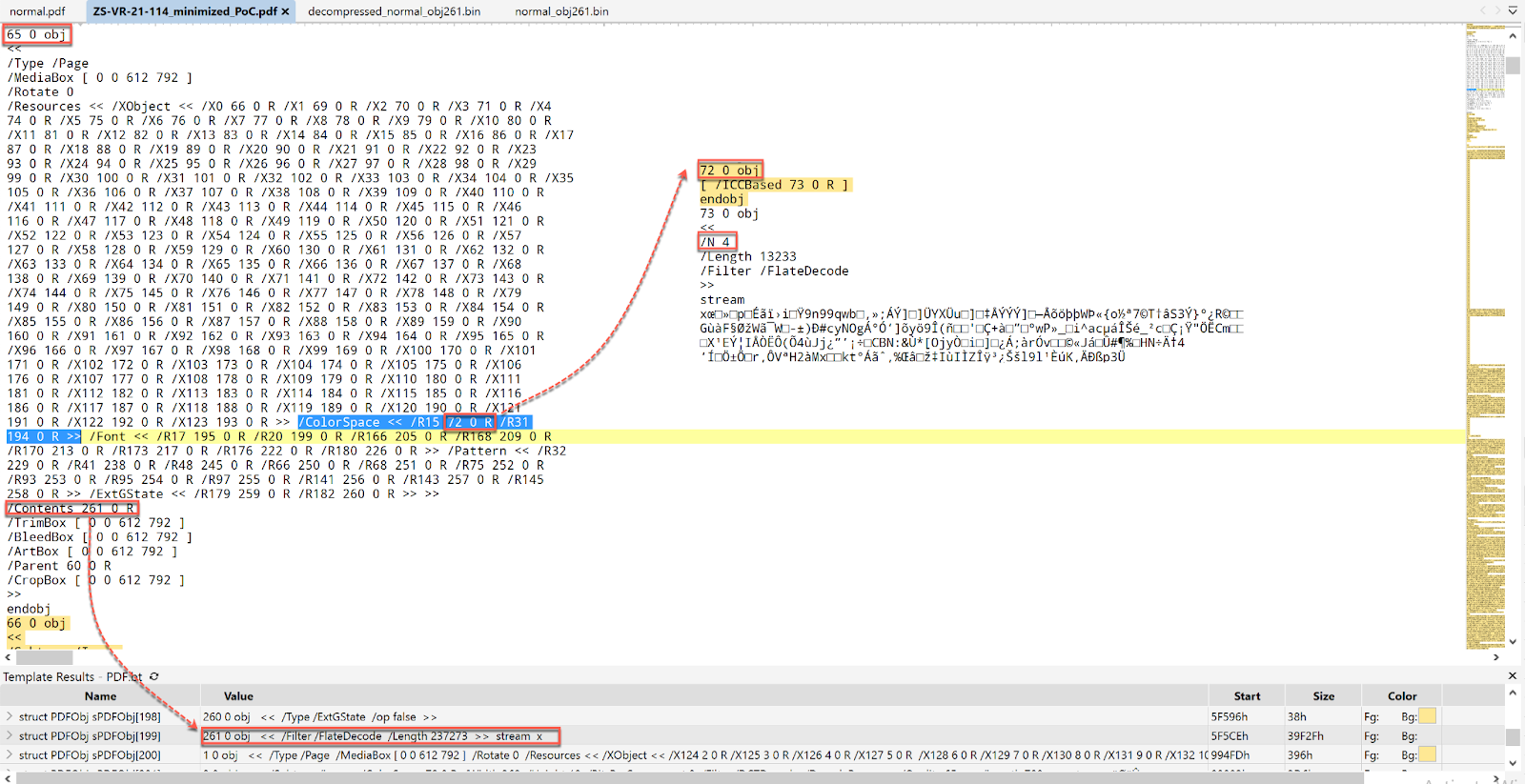 In Figure 2, the obj 65 uses obj 261 as its content and references obj 72 as its colorspace. The obj 72 is an ICCBased family color space and references obj 73 as its International Color Consortium (ICC) profile. ICCBased color spaces can have 1, 3, or 4 components (defined by the N dictionary value). They often use Gray (1 component), RGB (3 components), or CMYK (4 components). The parameter “/N 4” indicates the number of color components in the color space described by the ICC profile data. The stream data in both obj 261 and obj 73 has been compressed using the deflate algorithm. (For more information on deflate, please refer to https://tools.ietf.org/html/rfc1951). Zlib is a C library that implements the deflate algorithm. Adobe Acrobat uses zlib to decompress the deflate-compressed data. An example Python script is shown below to decompress the data in obj 261 and obj 73, respectively. 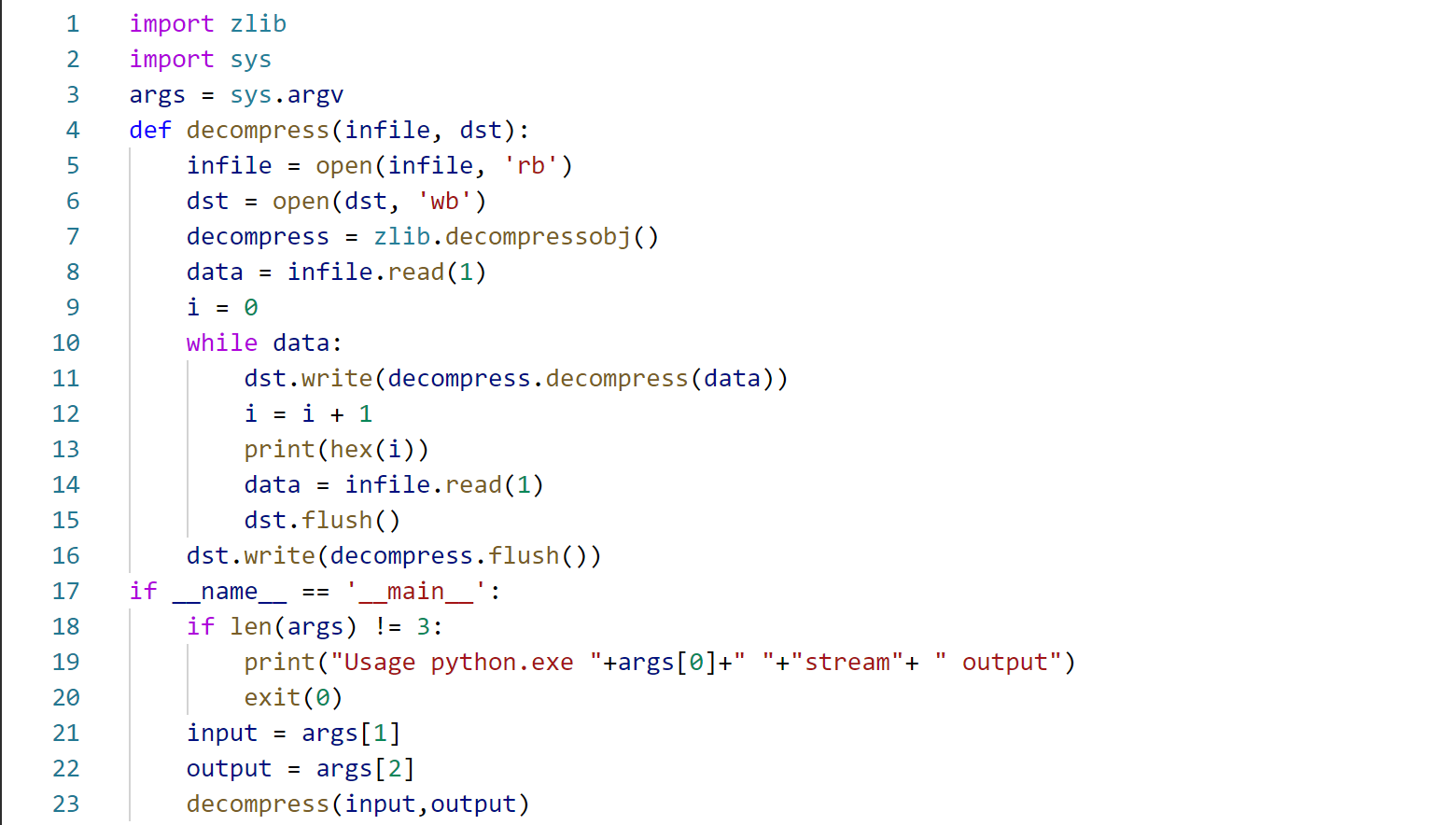 The uncompressed stream content in obj 261 contains a stream of graphics operators in Figure 4. Many of these streams contain invalid operators and abnormal operands.

The uncompressed stream content in obj 73 is shown in Figure 5. It’s an ICC profile with 0x39D0 bytes. The ICC Profile Format Specification refers to https://www.color.org/icc32.pdf. 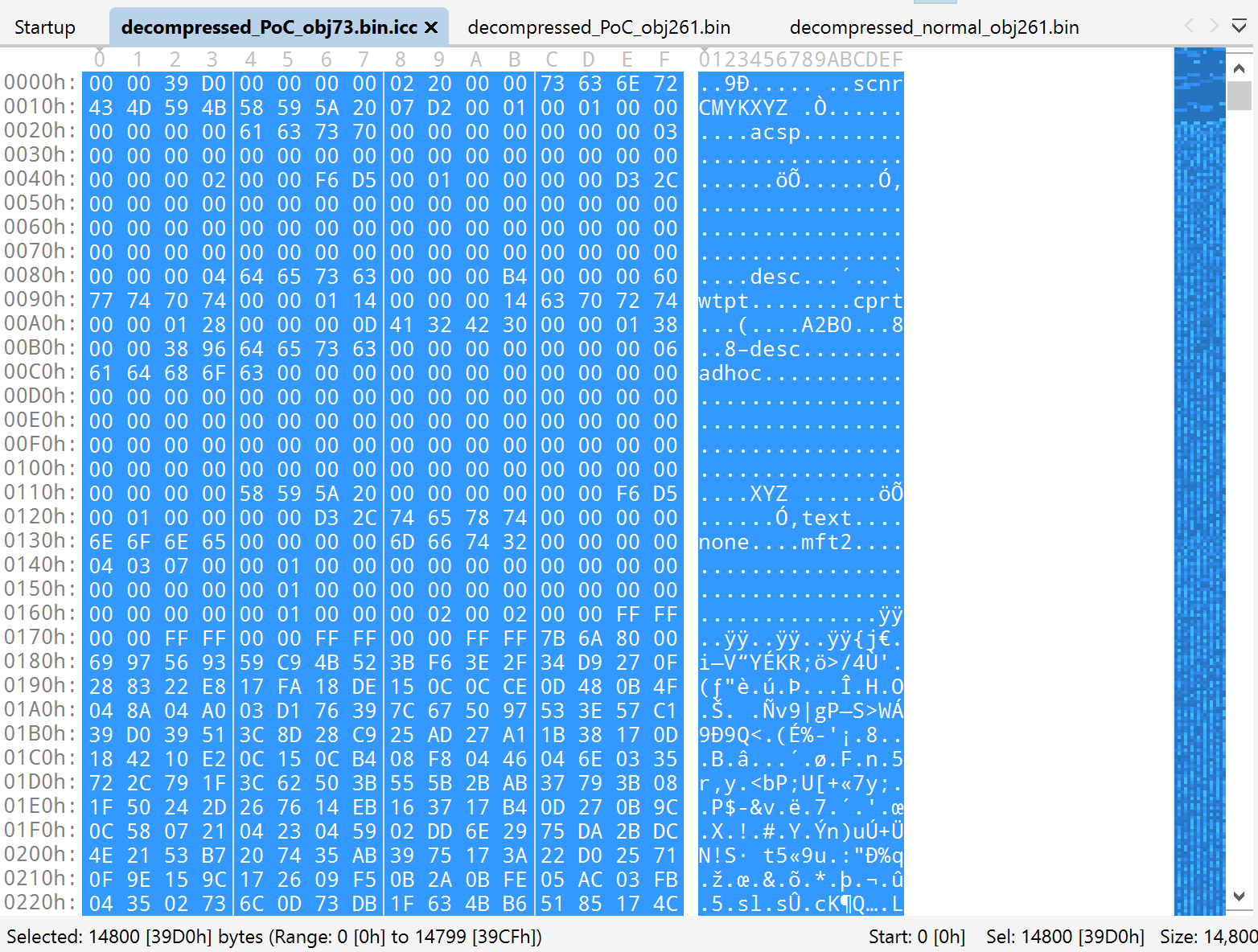 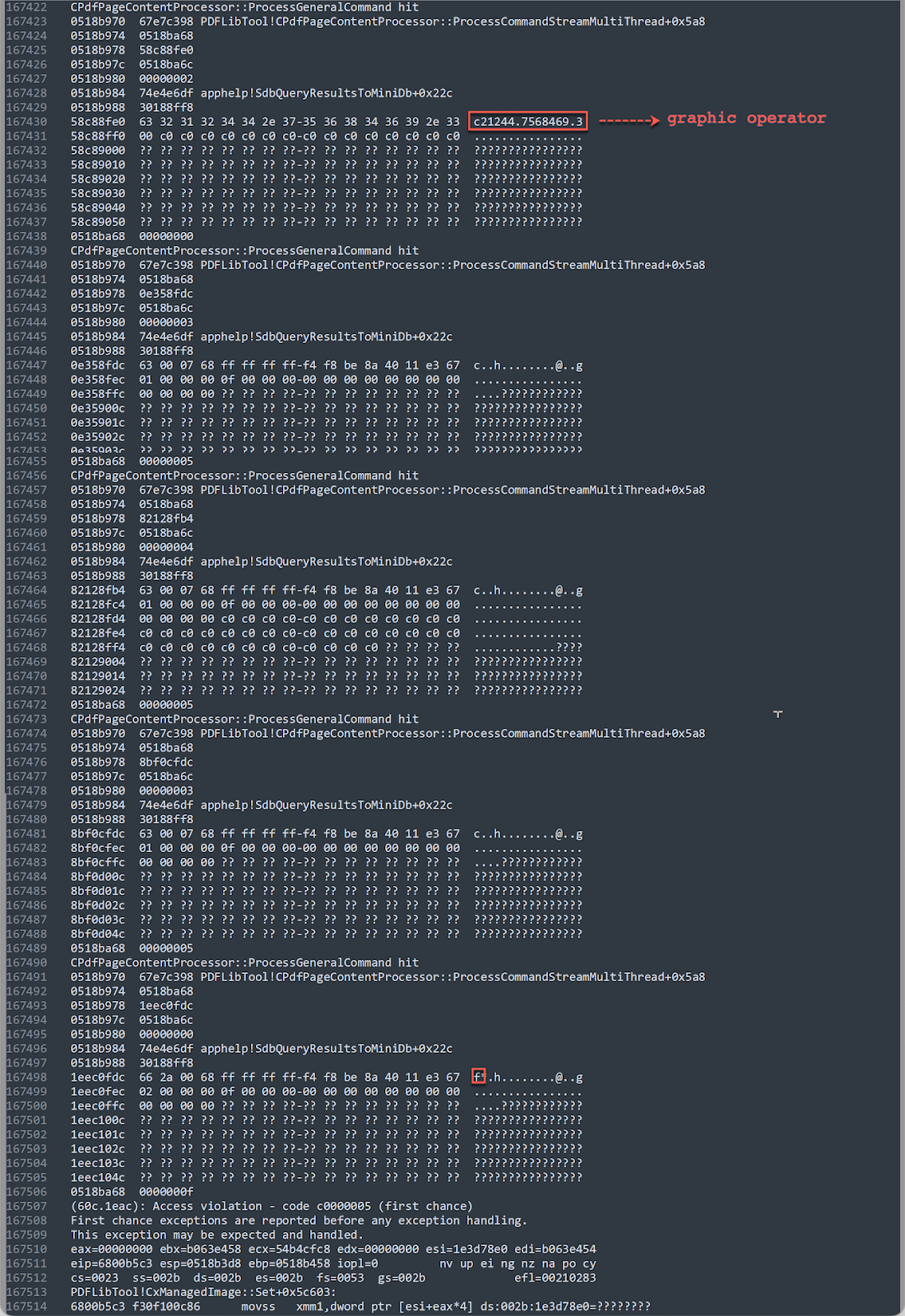 Figure 6. Output of the breakpoint at CPdfPageContentProcessor::ProcessGeneralCommand 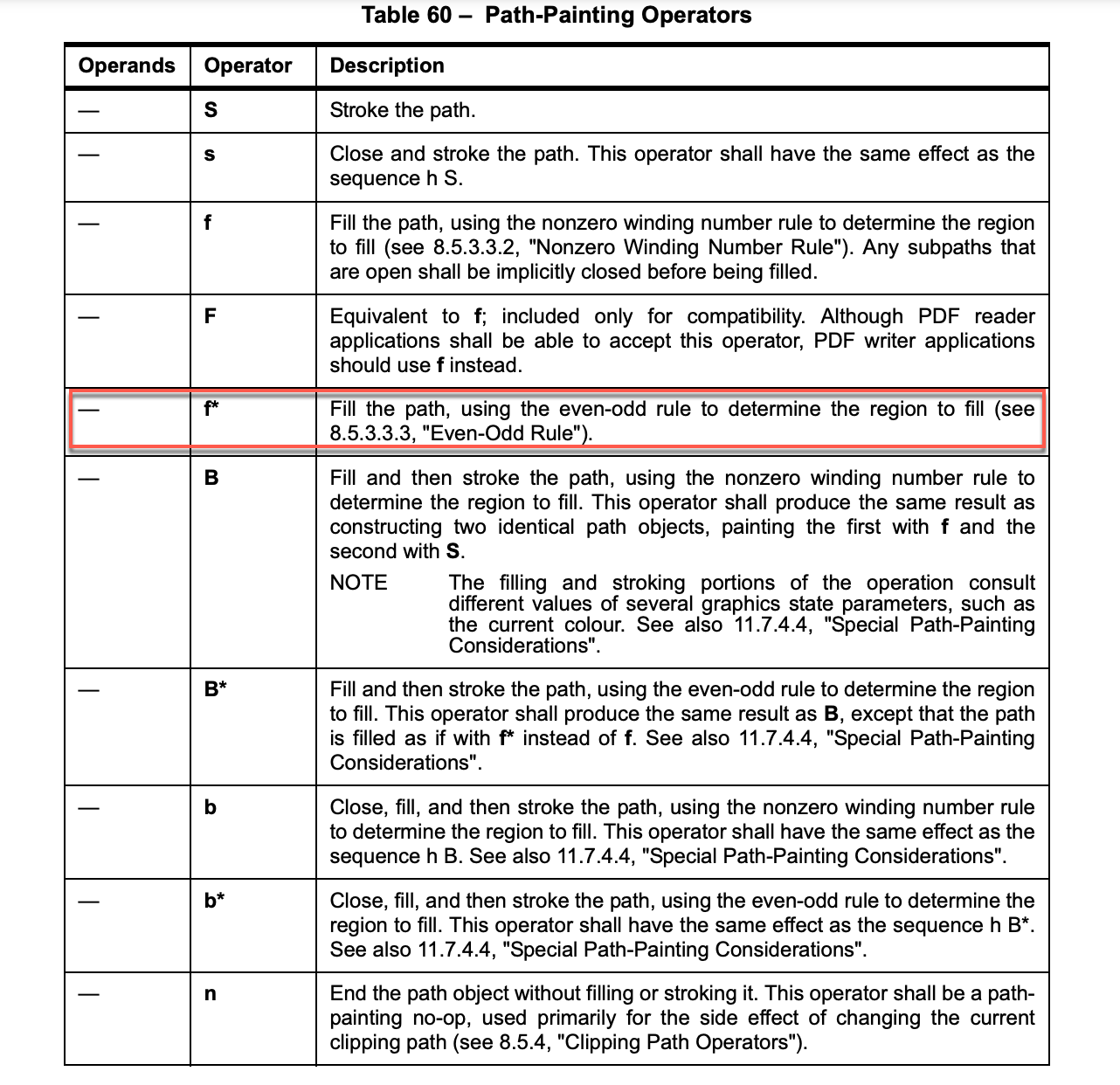 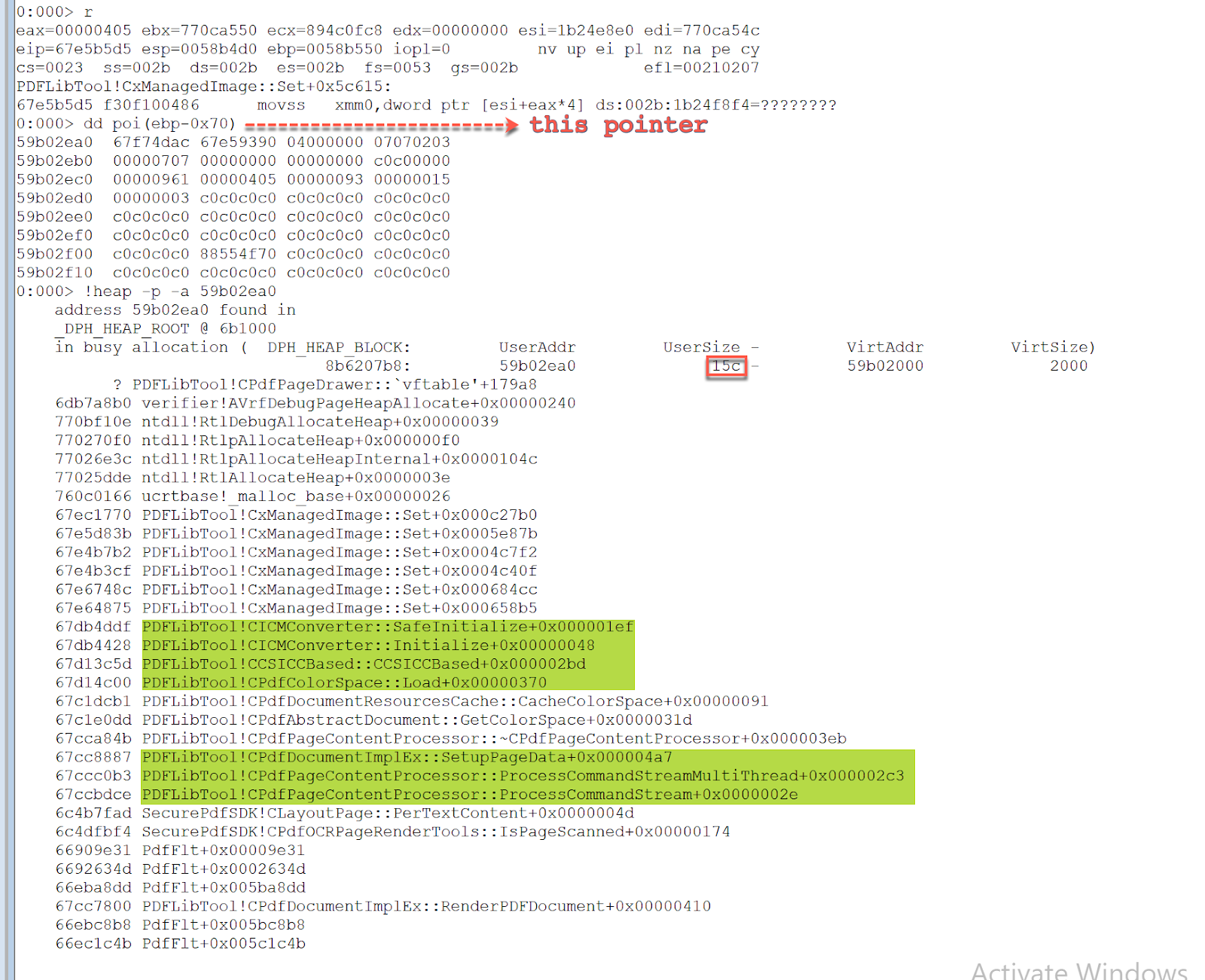 Figure 9. The call stack and this pointer when the crash occurs

The following breakpoint is set to trace how the heap buffer is allocated and initialized.

When the breakpoint at CICMConverter::Initialize(uchar *,uint,solid::pal::COLORTYPE) is hit, the three function parameters can be inspected as shown in Figure 10.

Figure 10. The parameters of CICMConverter::Initialize(uchar *,uint,solid::pal::COLORTYPE) after the breakpoint is hit

When the breakpoint at PDFLibTool!CxManagedImage::Set+0x5e871 is hit, it pushes 0x15c on the stack as the parameter passed to the function malloc to allocate a heap buffer with a size of 0x15c bytes as seen in Figure 11. 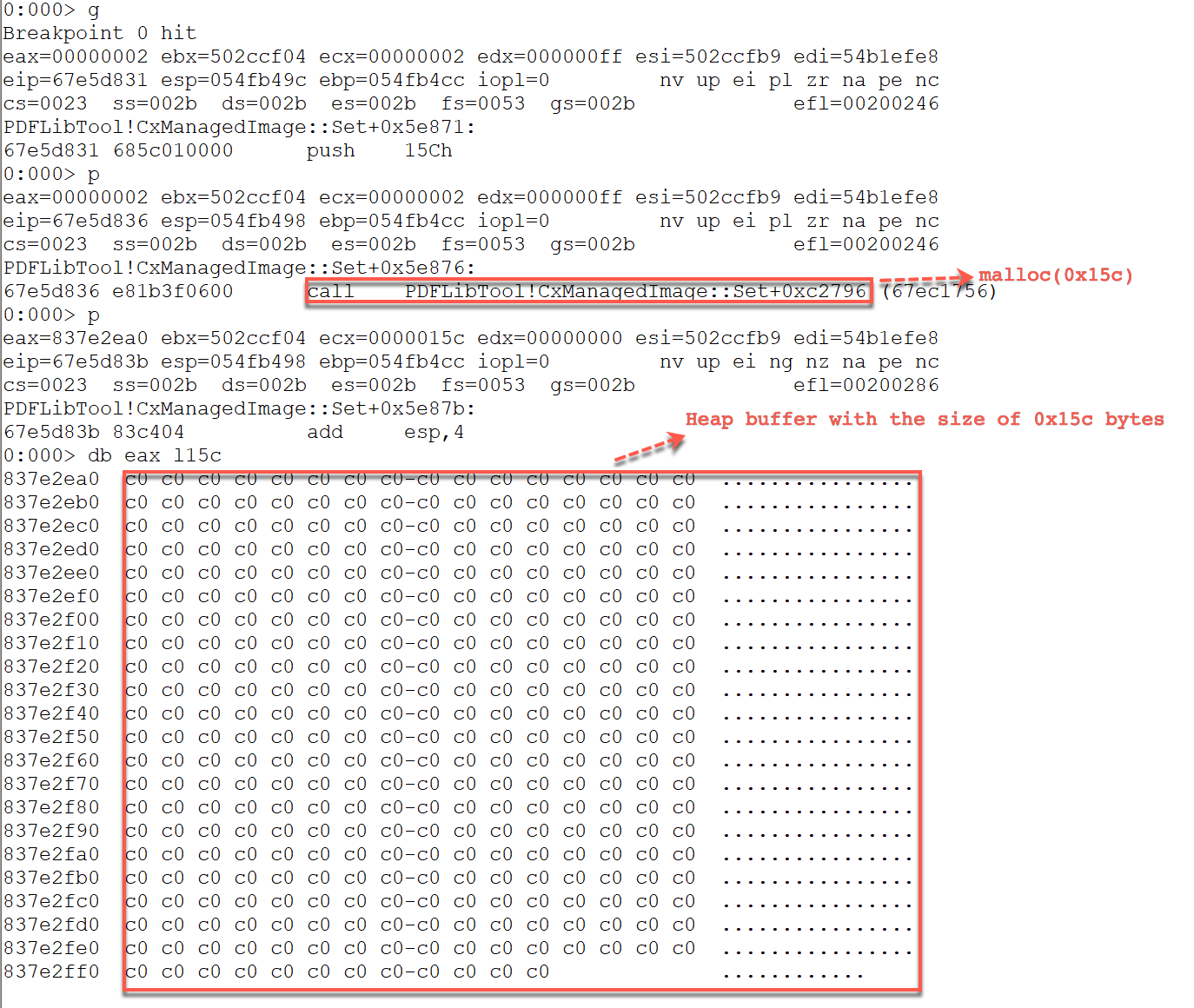 The corresponding snippet of pseudocode in IDA Pro is shown in Figure 12. After the heap buffer is allocated, the code performs some initialization for the heap buffer. First, it calls the function sub_102B7BC0 to initialize the vtable pointer and other fields. The name of the vftable indicates that the heap buffer is a CIccCLUT object (which represents the ICC Color Lookup Tables).

Figure 12. The relevant snippet of pseudocode in IDA Pro 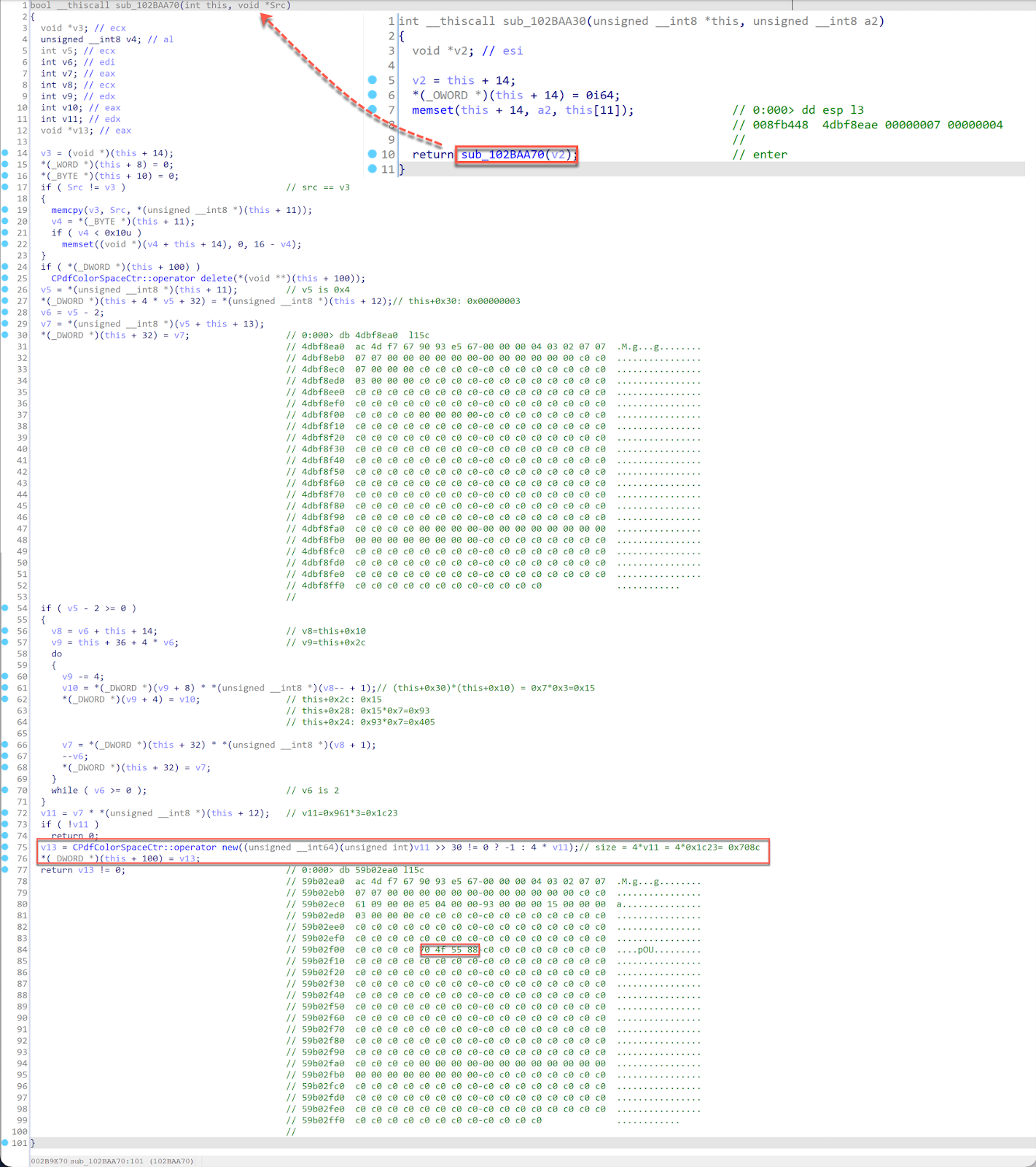 Figure 13. The pseudocode of the function sub_102BAA70

A memory write breakpoint can be set using the command “ba w4 addr” on the heap buffer. In Figure 12, after the function sub_102BAA30 is called, there is a function call to obtain the starting offset for the tables of the ICC profile file. The return value is 0x17c. Next, the code calls the function sub_102BE280, which is used to convert the tables in the mft2 tag in the ICC profile to a color lookup table. The color lookup table is stored in the newly allocated heap buffer (with a size 0x708c bytes) as shown in Figure 14. 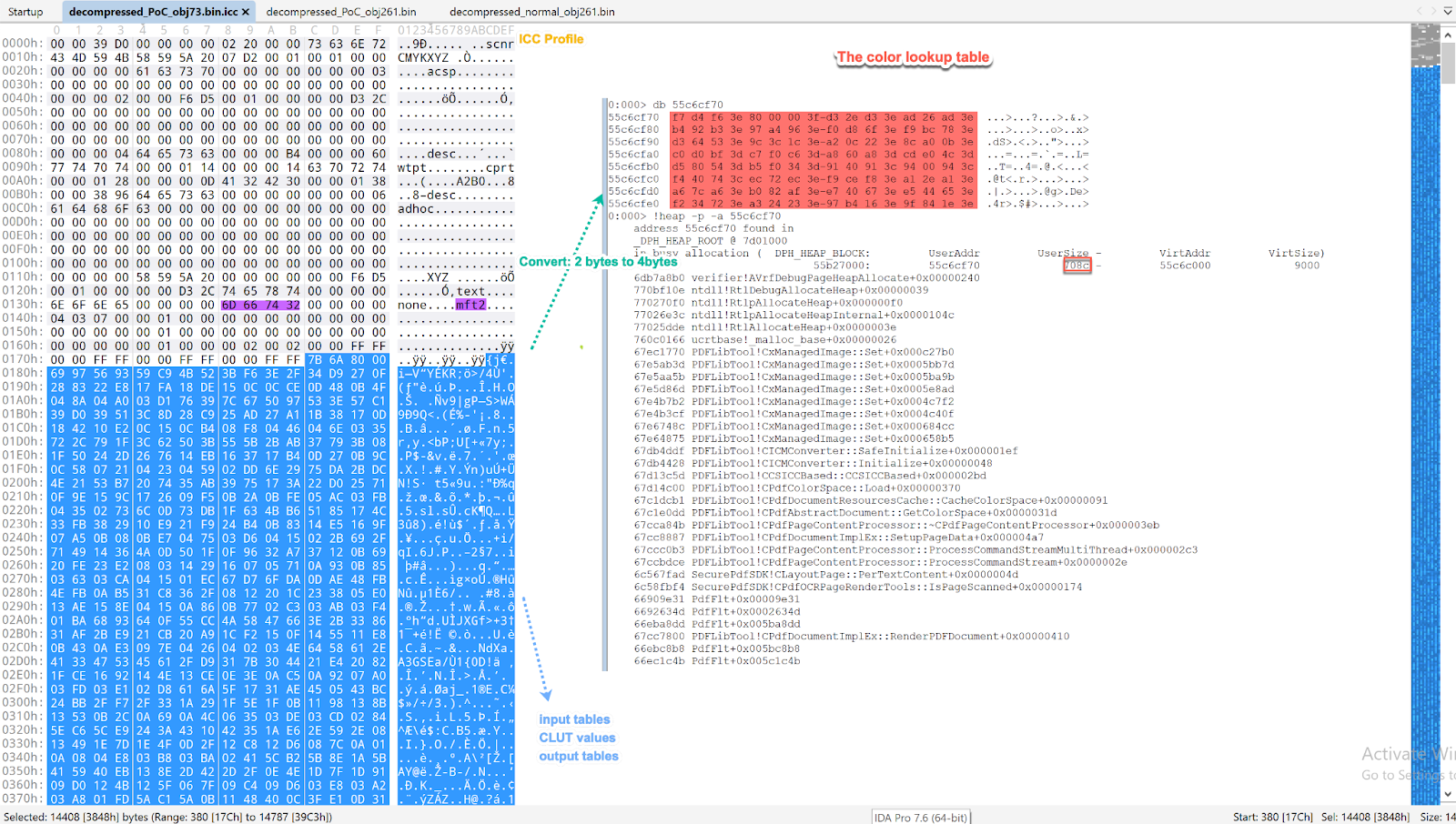 Finally, after the initialization of the heap buffer (CIccCLUT object) is completed, the memory layout is similar to the following in Figure 15.

In Figure 6, the crash occurs during the process of handling the graphic operator f*.  Since there are over 200 f* operators in the graphic stream, the following conditional breakpoint can be set to trace the malformed operator c21244.7568469.3.

The operator f* of interest is close to the operator c21244.7568469.3 in the graphic stream that is shown in Figure 8. When the breakpoint is hit, the following breakpoint at PDFLibTool!CPdfPageContentProcessor::ProcessGeneralCommand can be set again.

The breakpoint is hit several times until the following output in Figure 16 is reached. 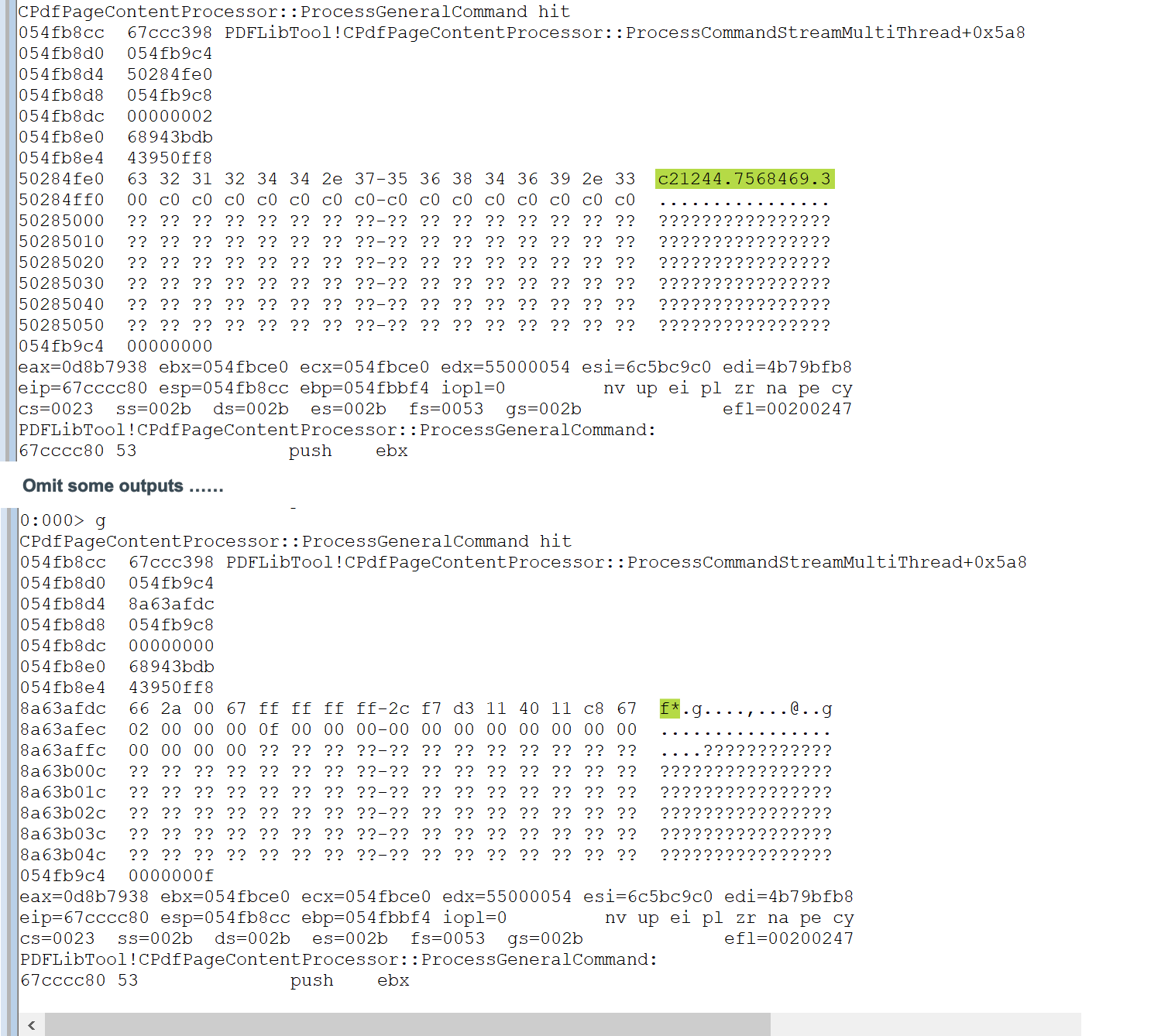 At this stage, the code that handles how the f* operator is processed can be analyzed. In the Proof of Concept section, the stack backtrace contains the method CCSICCBased::ConvertToRGB that was called before the crash occurs. This method is used to convert the CCSICCBased color into an RGB color. In obj 73 (in Figure 2) the parameter “/N 4” indicates the number of color components in the color space described by the ICC profile. This means that it will convert CMYK (4 components) into RGB by means of the ICC color lookup tables (CLUT).

Therefore a breakpoint can be set at the method PDFLibTool!CCSICCBased::ConvertToRGB.

When this breakpoint is hit, the following output is expected in Figure 17.

The method PDFLibTool!CCSICCBased::ConvertToRGB takes 3 parameters. The second parameter is a pointer to a double type that stores four double type numbers which are 98929, 5511.01, 962.467, and 5. These four numbers are the operands for the operator scn. The description of the scn operator is listed in Figure 18. 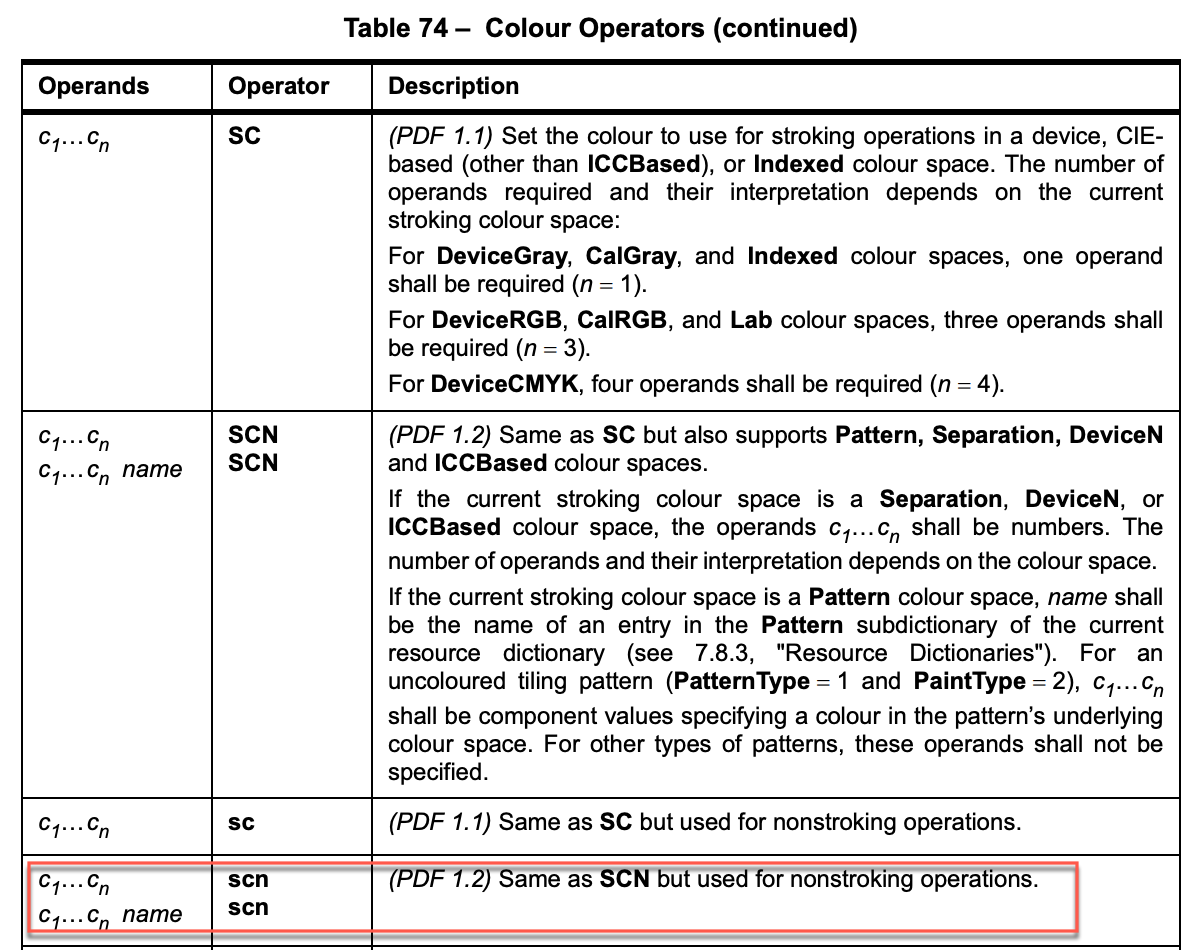 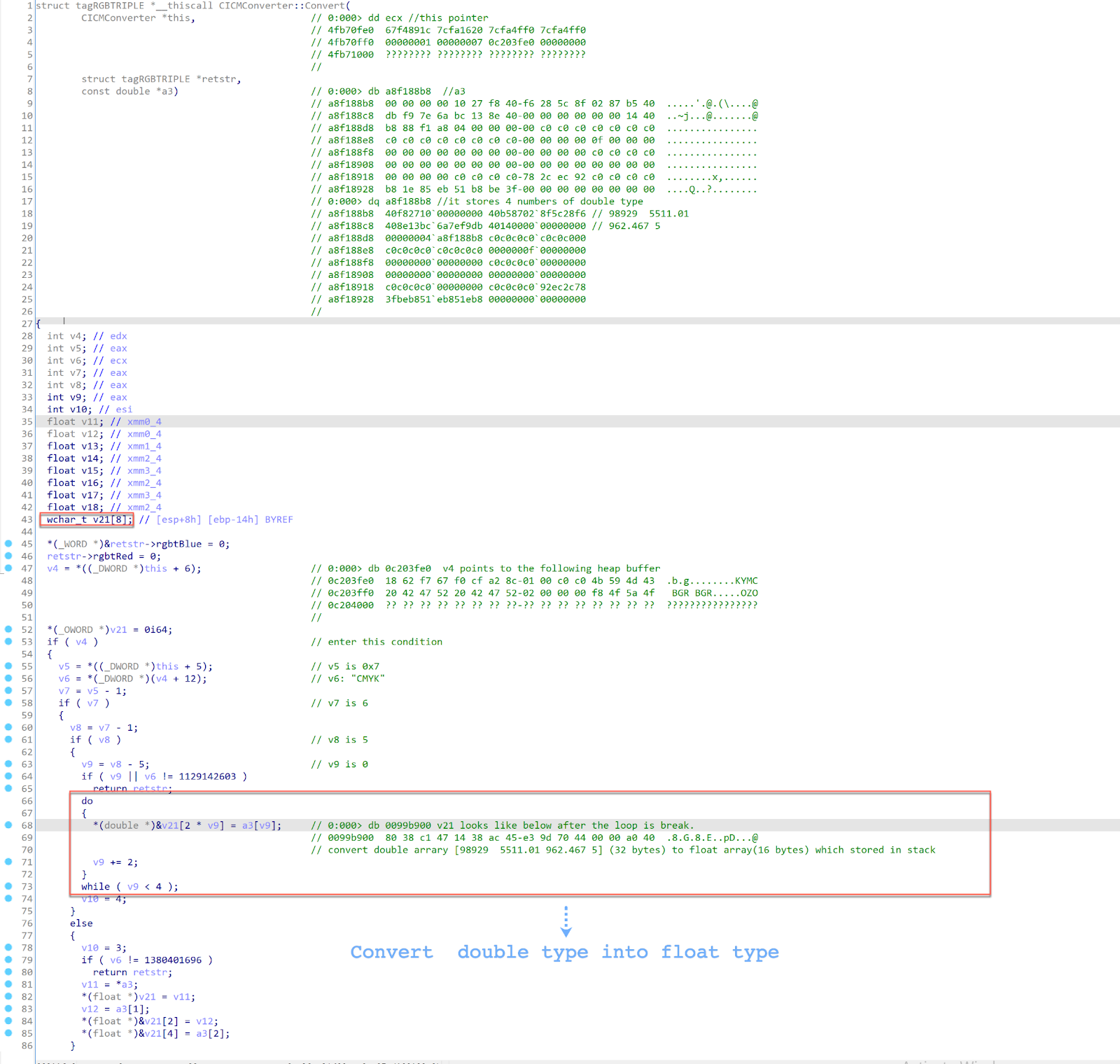 Figure 19. The pseudocode of the method CICMConverter::Convert

The memory layout of the float array is shown in Figure 20. 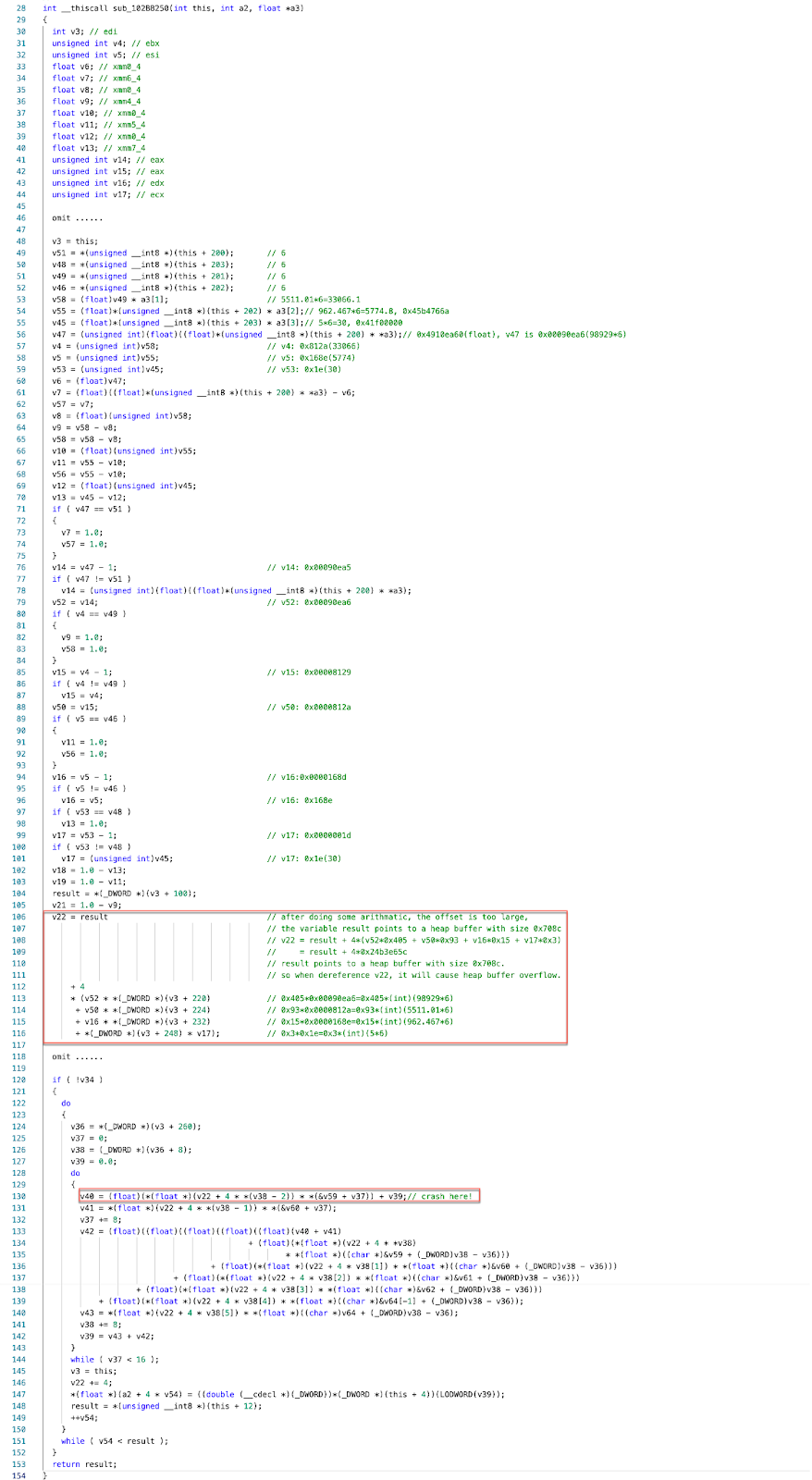 When the program reaches the function sub_102BB250, the memory layout of the function parameters and this pointer are shown in Figure 22. 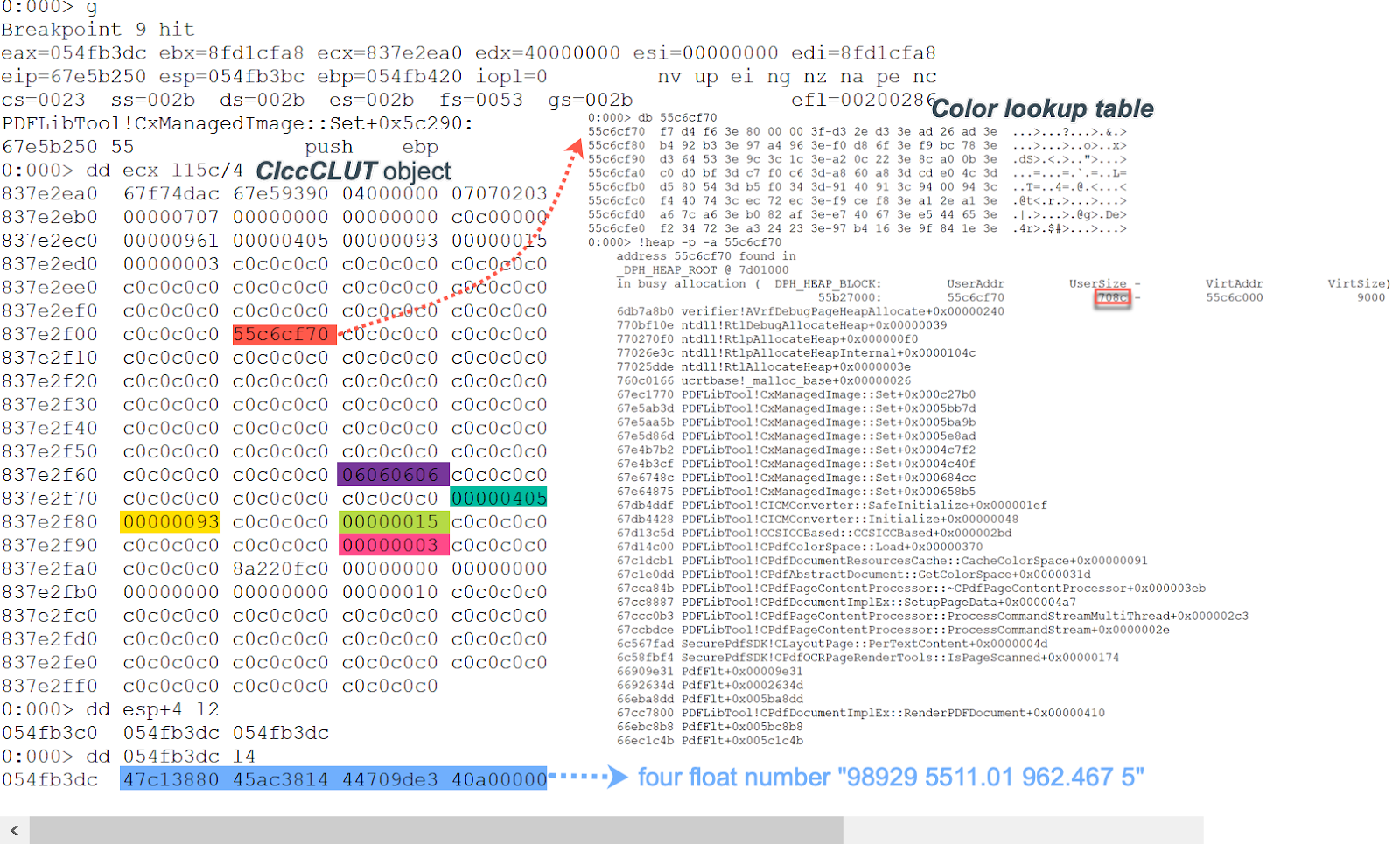 Figure 22. The memory layout of the parameters and this pointer of sub_102BB250

As seen in Figure 22, the this pointer points to a CIccCLUT object with the size of 0x15c bytes. At the offset 0x64, a pointer is stored that points to the heap buffer of the color lookup table whose size is 0x708c bytes. In Figure 21, we can see that the program does some arithmetic before dereferencing the variable v22 in the following code.

A valid scn operator is shown below the malformed operand values in Figure 23. The value of each number should fall into the range from 0 to 1.

Figure 23. Comparison between normal operands and malformed operands for the scn operator

All users of Adobe Acrobat and Reader are encouraged to upgrade to the latest version of this software. Zscaler’s Advanced Threat Protection and Advanced Cloud Sandbox can protect customers against this vulnerability.