Exploit kits are becoming an increasingly popular means of spreading attacks. Umesh recently blogged about seeing a spike in the usage of the Blackhole exploit kit. This exploit kit targets multiple known vulnerabilities present in a victim's browser, increasing the probability of a successful compromise. Various exploit kits differ in the way they are packaged, designed and implemented. The most distinguishing factor among different exploit kits is how exploits are obfuscated, in order to bypass various security controls.

Object Initializations and other functions, 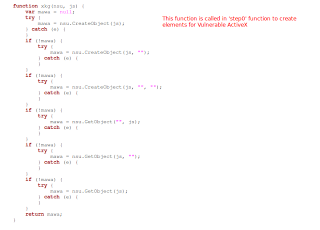 Google safe browsing reports this URL to be malicious. Visiting the above link redirects you to fake search portal delivering ads hxxp://searchportal.information.com/?o_id=164060&domainname=register-domain-names.info.

Step 0: This is the entry point of the malicious code. It completes required initializations of objects for vulnerable ActiveX controls. Upon the successful creation of objects, it launches the first attack vector by calling function 'gr', which injects a malicious file. The code then moves on to Step 1.

This example illustrates how the multi-level attacks targeted by exploit kits are becoming a favored choice of attackers these days. More importantly, the creation of automated tools to deliver these exploits, provides attackers with the opportunity to launch campaigns on a frequent basis, with limited technical knowledge.