A Look at the Top Blocked Websites

Google Safe Browsing is the most popular security denylist in use. It is leveraged by Firefox, Safari and Google Chrome. As such, being blocked by Google is a big deal - users of these three browsers are warned not to visit the sites and Google puts warnings in their search results.

Most of the top-ranked websites that have been blocked are not malicious by nature, but they have been hijacked. Malicious JavaScript, similar to the code we found on a French government website, or a malicious IFRAME is generally the culprit. It is interesting to notice that Google decided to denylist the infected site, rather than just blocking the external domain hosting the malicious content.

I have also checked to see which country the blocked domain is hosted in. Here is the breakdown: 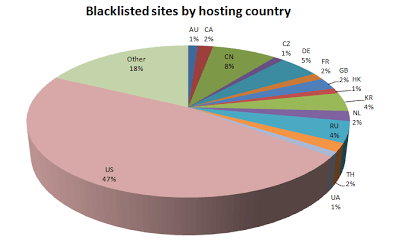 Most of the blocked sites are hosted in the US. Western Europe (especially Germany, France and the Netherlands) is number two, followed by China (8%).