Active since 2017, Lyceum group is a state-sponsored Iranian APT group that is known for targeting Middle Eastern organizations in the energy and telecommunication sectors and mostly relying on .NET based malwares.

Zscaler ThreatLabz recently observed a new campaign where the Lyceum Group was utilizing a newly developed and customized .NET based malware targeting the Middle East by copying the underlying code from an open source tool.

Key Features of this attack:

During this campaign, the macro-enabled Word document (File name: ir_drones.docm) shown below is downloaded from the domain “http[:]//news-spot.live” disguising itself as a news report related to military affairs in Iran. The text of the document is copied from the following original report here: https[:]//www[.]rferl[.]org/a/iran-drone-program-threats-interests/31660048.html

The threat actor then leverages the AutoClose() function to drop the DNS backdoor onto the system. Upon closing the document the AutoClose() function is executed, reading a PE file from the text box present on the 7th page of the word document and parsing it further into the required format as shown below with the “MZ” header as the initial two bytes of the byte stream.

This PE file is then further written into the Startup folder in order to maintain persistence via the macro code as shown below in the screenshot. With this tactic, whenever the system is restarted, the DNS Backdoor is executed.

The dropped binary is a .NET based DNS Backdoor named “DnsSystem” which allows the threat actors to execute system commands remotely and upload/download data on the infected machine.

Below, we analyze the dropped .NET based DNS Backdoor and its inner workings.

The Lyceum Group has developed a .NET based DNS Backdoor which has been widely used in the wild in their recent campaigns. As discussed earlier, the backdoor was dropped in the Startup folder of the infected system from a Macro Enabled Word document.

The .NET based DNS Backdoor is a customized version of the Open source tool DIG.net (DnsDig) found here: DNS.NET Resolver (C#) - CodeProject. DIG.net is an open source DNS Resolver which can be leveraged to perform DNS queries onto the DNS Server and then parse the response. The threat actors have customized and appended code that allows them to perform DNS queries for various records onto the custom DNS Server, parse the response of the query in order to execute system commands remotely, and upload/download files from the Command & Control server by leveraging the DNS protocol.

Initially the malware sets up an attacker controlled DNS server by acquiring the IP Address of the domain name “cyberclub[.]one” = 85[.]206[.]175[.]199 using Dns.GetHostAddresses() for the DIG Resolver function, which in turn triggers an DNS request to cyberclub[.]one for resolving the IP address. Now this IP is associated as the custom attacker controlled DNS Server for all the further DNS queries initiated by the malware.

Next, the Form Load function generates a unique BotID depending on the current Windows username. It converts the username into its MD5 equivalent using the CreateMD5() function, and parses the first 8 bytes of the MD5 as the BotID for the identification of the user and system infected by the malware.

Now, the backdoor needs to receive commands from the C2 server in order to perform tasks.  The backdoor sends across an initial DNS query to “trailers.apple.com” wherein the domain name “trailers.apple.com” is concatenated with the previously generated BotID before initiation of the DNS request. The DNS query is then sent to the DNS server in order to fetch the “TXT” records for the provided domain name by passing three arguments to the BeginDigIt() function:

The BeginDigIt function then executes the main DNS resolver function “DigIt.” This sends across the DNS query in order to fetch the DNS record for the provided target domain name to the DNS server, and parses the response as seen in the code snippet below.

Comparing the Digit Resolver Code DigIt() function strings with the Dig.Net tool output from the screenshot shown below provides us further assurance that the Dig.Net tool has been customized by the Lyceum Group to develop the following .Net based DNS backdoor.    .

The malware utilizes a DNS attack technique known as “DNS Hijacking” where in the DNS server is being controlled by the attackers which would allow them to manipulate the response to the DNS queries. Now let's analyze the DNS Hijacking routine below.

As discussed earlier, the backdoor performs initial DNS queries in order to fetch the TXT records for the domain EF58DF5trailers.apple.com. EF58DF5 is the BotID generated based on the Windows user to receive commands from the C2 server.

As can be seen in the above screenshot, a DNS query is performed to fetch the TXT records for the domain name: EF58DF5trailers.apple.com to the DNS Server: 85[.]206[.]175[.]199 which is the attacker-controlled DNS server previously initialized.

Here’s where the DNS hijacking happens: As the malware sends across a DNS query to fetch the TXT records to the attacker-controlled DNS server, the attacker controlled DNS server responds with an incorrect response consisting of the commands to be executed by the backdoor such as ipconfig,whoami,uploaddd etc as shown in the screenshot below.

Following is the DIG.Net DNS response received by the backdoor and then further parsed in order to execute commands on the infected machine.

The above screenshot consists of the DNS query performed to the attacker controlled DNS server along with the target domain name EF58DF5trailers.apple.com. The Answer section consists of the query response, which includes the target Domain name and the response to the TXT record with two values, “ipconfig” - command to be executed and “1291” - Communication ID

Next, the Dig.net response is parsed using multiple pattern regex code routines which parse out the TXT record values—the aforementioned command and communication ID—from the complete response received by the malware. 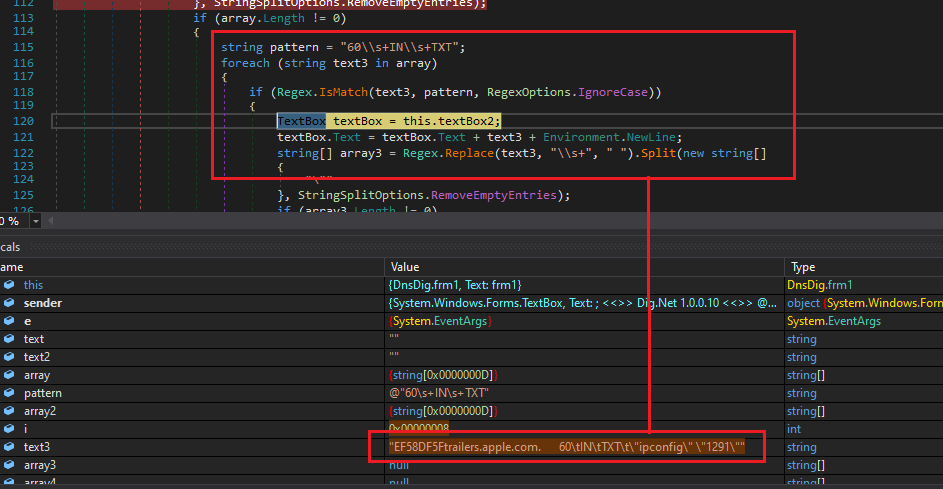 Next, depending on the command received in the TXT record from the C2 server, there are three functions which can be performed by the Lyceum backdoor: 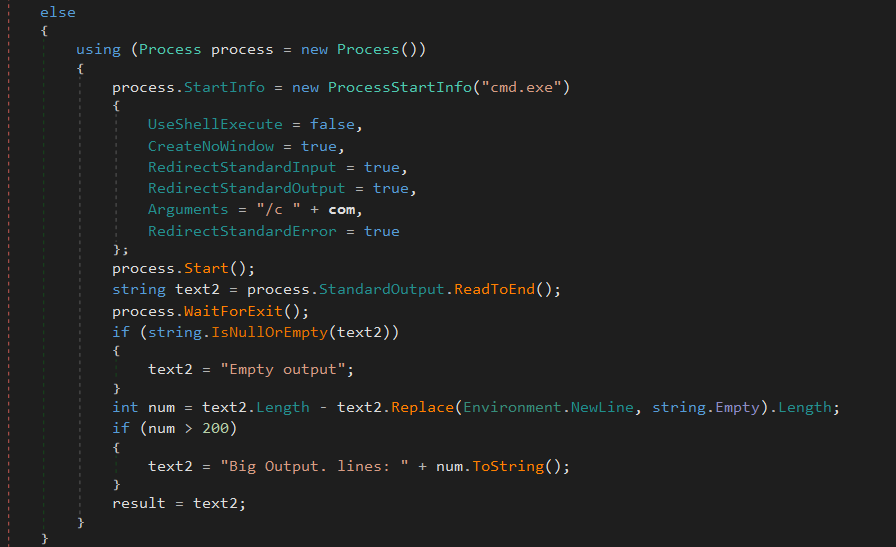 In this case, the TXT record response we received for the DNS query performed against the attacker controlled DNS server is “ipconfig”. This response initiates the Command execution routine of the backdoor and thus the command “ipconfig” would be executed on the infected machine - cmd.exe /c ipconfig

Further, the command output is exfiltrated to the C2 server, encoded in Base64 and then concatenated with the Communication ID and the previously generated BotUID using “$” as the separator.

Fig 17. Exfiltration of Encoded Command Output via A records queries on the attacker controlled DNS server 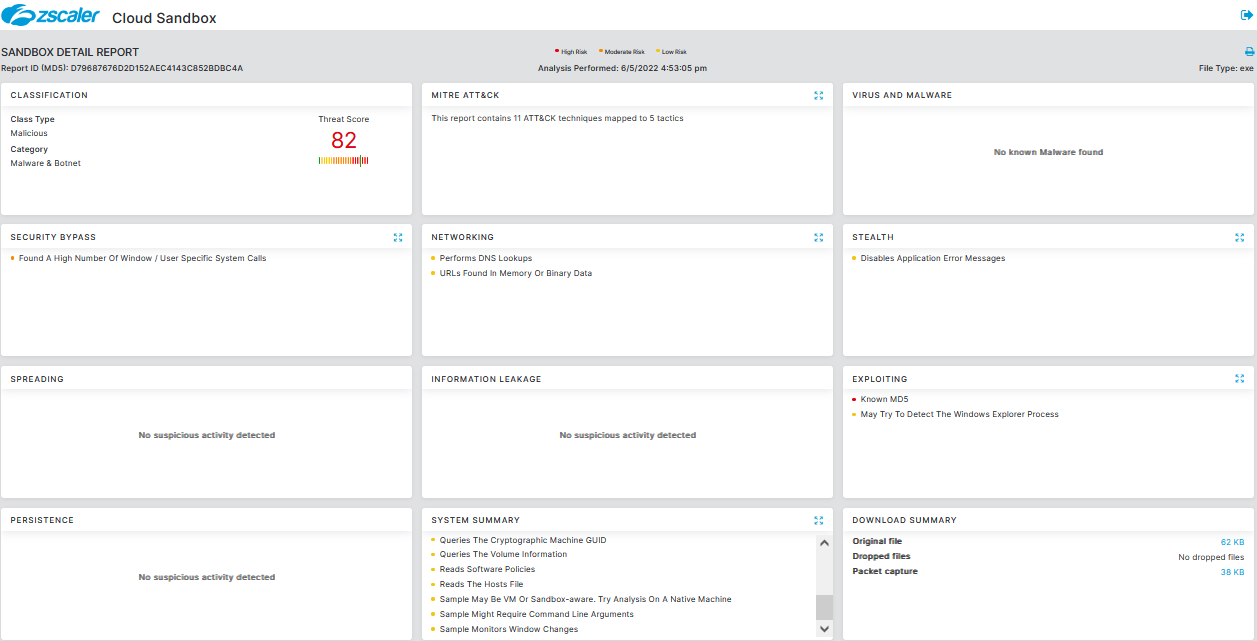 APT threat actors are continuously evolving their tactics and malware to successfully carry out attacks against their targets. Attackers continuously embrace new anti-analysis tricks to evade security solutions; re-packaging of malware makes static analysis even more challenging. The Zscaler ThreatLabz team will continue to monitor these attacks to help keep our customers safe.

ThreatLabz is the security research arm of Zscaler. This world-class team is responsible for hunting new threats and ensuring that the thousands of organizations using the global Zscaler platform are always protected. In addition to malware research and behavioral analysis, team members are involved in the research and development of new prototype modules for advanced threat protection on the Zscaler platform, and regularly conduct internal security audits to ensure that Zscaler products and infrastructure meet security compliance standards. ThreatLabz regularly publishes in-depth analyses of new and emerging threats on its portal, research.zscaler.com.

Stay updated on ThreatLabz research by subscribing to our Trust Issues newsletter today.