In November 2021, ThreatLabz identified a previously undocumented variant of an attack chain used by the South Korea-based Dark Hotel APT group. We also discovered new activity on the command-and-control (C2) infrastructure previously associated with this APT group. The new activity on their infrastructure aligns with the type of targets chosen by this threat actor in the past.

In this blog, we describe our new findings in detail, including technical analysis of the attack chain and its components as well as the C2 infrastructure analysis.

DarkHotel is an advanced persistent threat (APT) group based out of South Korea that has been active since at least 2007. They are known to target senior business executives by uploading malicious code to their computers through infiltrated hotel WiFi networks, as well as through spear-phishing and P2P attacks.

We attribute this attack chain to the Dark Hotel APT group with a high level of confidence due to the below reasons:

1. The multi-layer malicious document which drops a scriptlet post-exploitation.
2. Filename of the dropped file system artifacts such as the scriptlet file - googleofficechk.sct
3. The command-and-control (C2) commands are the same as earlier payloads used by Dark Hotel.
4. Timestamps of the dropped payloads are around the same timeframe when previously documented Dark Hotel APT activity was observed. 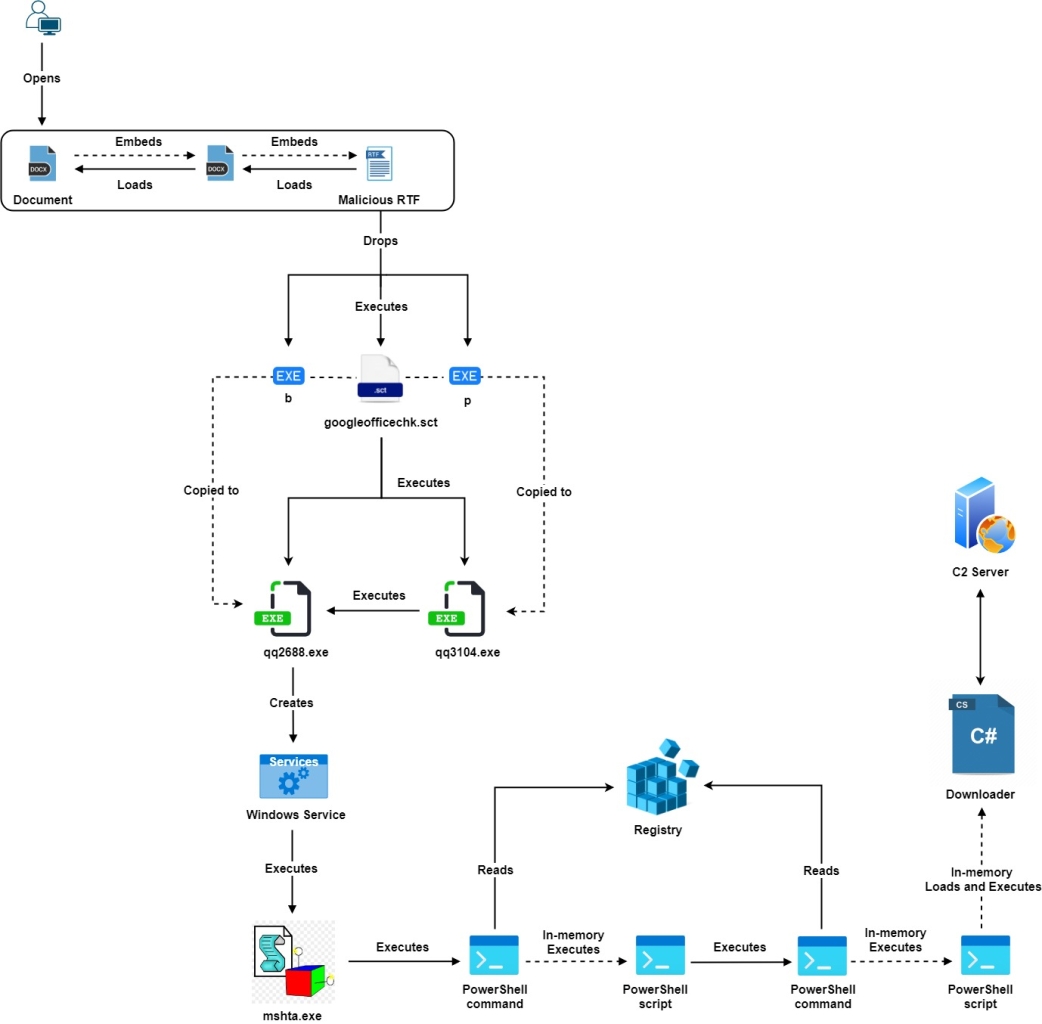 For the purpose of technical analysis we will consider the document with MD5 hash: 89ec1f32e1bbf794c41fa5f5bc6869c0 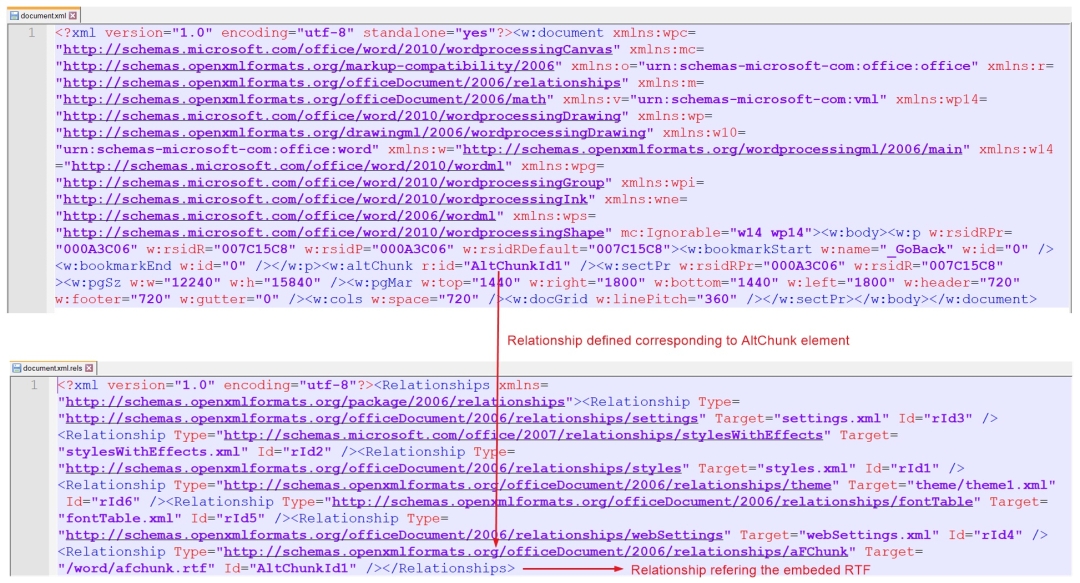 When the RTF file is loaded, the three OLE objects are dropped in the %temp% directory with the names “p”, “b” and “googleofficechk.sct”. Out of these three dropped files, the scriptlet file (googleofficechk.sct) is executed which is described in detail in the next section.

The subsequent operations performed by this scriptlet file differ from what has been observed in past attacks.

The scriptlet file in our case performs the following operations:

Note: This file check is likely performed to detect if the machine is already infected, which also indicates that the threat actor used multiple variations while performing the attack.

3. Releases the IP addresses bound to all DHCP-enabled network adapters
4. Copies the executable from “%temp%\p” to “%LOCALAPPDATA%\PeerDistRepub\qq3104.exe”
5. Copies the executable from “%temp%\b” to “%LOCALAPPDATA%\PeerDistRepub\qq2688.exe”
6. Creates a ZoneIdentifier ADS (Alternate Data Stream) corresponding to the files copied above with the following content:

Note: The ZoneID=1 is written to create the false evidence that the file was downloaded from the Intranet

7. Execute the binary “qq3104.exe” whose functionality is described in detail in the next section
8. Renew the IPv4 address for the network adapters

As mentioned in the previous section, the binary qq3104.exe gets executed as part of the operations performed by the scriptlet file. This binary mainly performs three operations:

1. Spoofs the process related information in the PEB structure to pretend as explorer.exe

This binary on execution checks if there is any running process with the name “360Tray.exe” or “QQPCTray.exe” and does some firewall checks. These process names correspond to security software popularly used in China.

The main operation performed by the binary is to register a Windows service which also serves as a persistence mechanism.

Based on the service registry values, it is an auto start service which executes VBScript code using mshta.exe.

The PowerShell command which is executed as part of the service execution reads, decodes and executes the data stored under registry value “HKEY_LOCAL_MACHINE\\SYSTEM\\CurrentControlSet\\services\\X\\s”.

The decoded data is a PowerShell script which executes another PowerShell command. The command is shown in Figure 9 below.

Similar to the first PowerShell command it also reads, decodes and executes the data stored under registry value “HKEY_LOCAL_MACHINE\\SYSTEM\\CurrentControlSet\\services\\X\\x”.

The .NET dll on analysis turns out to be the same downloader which is described in Antiy blog. The only changes are in the configured C2 servers and the parameters which are used as part of network requests.

Information about the C2 servers is provided in Indicators of compromise section while the format for network requests is described below:

We analyzed the C2 infrastructure related to the IP address of the server hosting the domain - signing-config[.]com. This domain was configured in the stage-2 scriptlet file and used to exfiltrate system information to the C2 server.

Leveraging passive DNS data, we identified several domains hosted on the server with the above IP address and noticed a pattern in the domain names. A lot of domains were created to spoof the names of organizations in China related to the government, education, and political think tanks.

Below are a few examples summarized in a table:

In addition to this, we also identified several newly registered domains on this server which are used to spoof cryptocurrency projects popularly used in China such as the Deeper network. 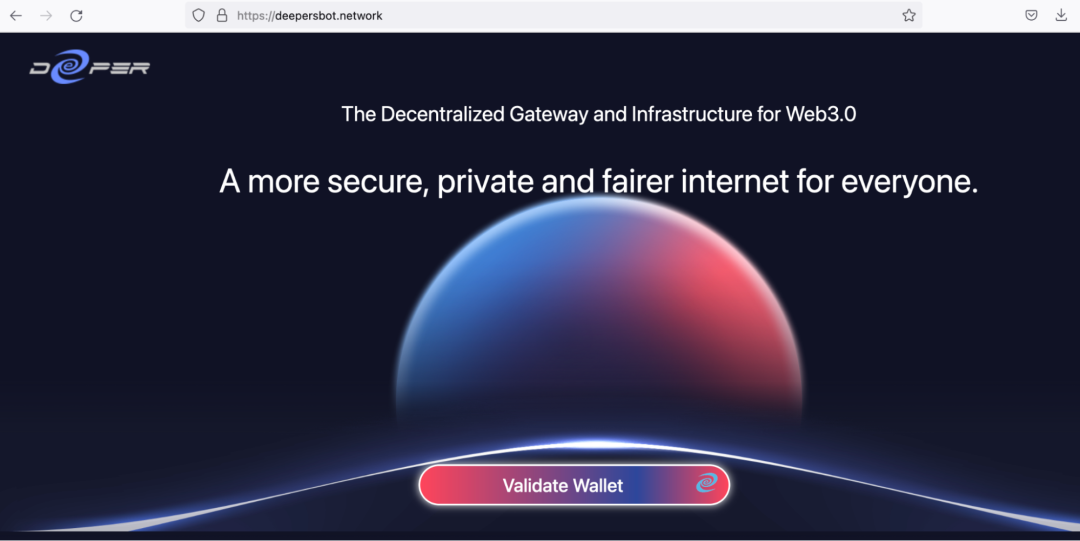 The fake domain asks the users to validate their wallet on the main page and presents them an option to choose from a wide variety of popularly used crypto currency wallets.

Once the user chooses the wallet type, they will be redirected to a page which prompts them to share their private key.

It uses one of the following 3 ways:

Phrase: A 12 or 24 word recovery phrase which can be used to restore the private key and steal the funds.

Private key: The private key itself

The table below summarizes the list of domains registered which use social engineering to steal the private keys of crypto currency wallets of the users: 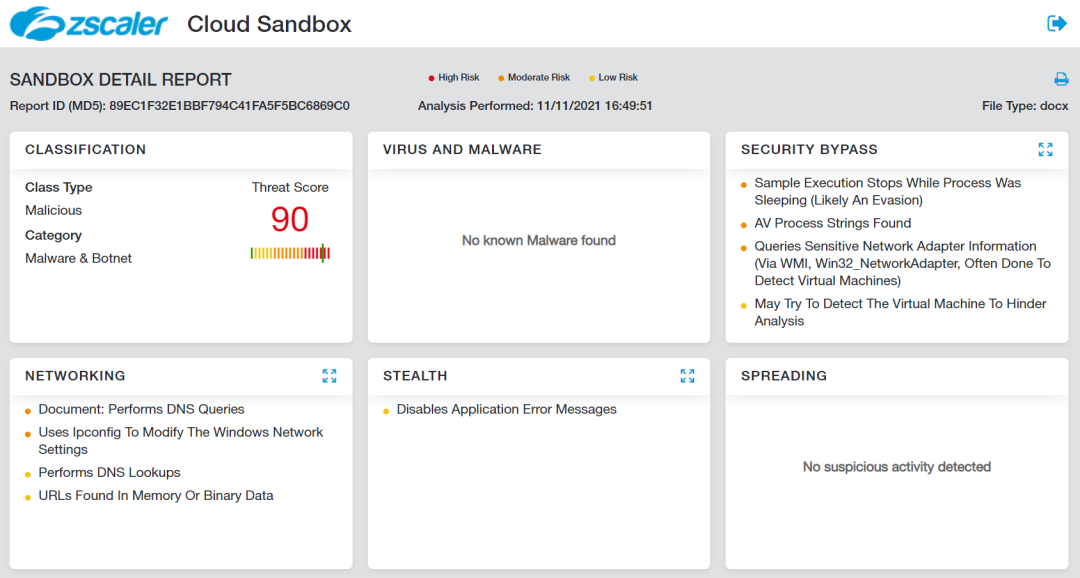