PrivateLoader is a downloader malware family whose primary purpose is to download and execute additional malware. Intel 471 and Walmart reported on PrivateLoader’s pay-per-install (PPI) service that distributes malware on behalf of other threat actors. The malware payloads can be selectively delivered to victims based on certain criteria (e.g. location, cryptocurrency or financial activity, on a corporate network, specific software installed, etc.) As previously reported, some of the payloads being distributed include Redline Stealer, Vidar Stealer, SmokeLoader, Stop ransomware, and other commodity malware.

The PrivateLoader malware is written in the C++ programming language, and based on the existence of multiple versions it seems to be in active development. The name “PrivateLoader” comes from debugging strings that can be found in some versions of the malware, for example:

PrivateLoader is modularized into a loader component and a main component.

Most of the important Windows DLL and API names used by PrivateLoader are also stored as encrypted stack strings. After decryption, PrivateLoader dynamically resolves the API functions at runtime. Finally, PrivateLoader adds junk code to obfuscate the program’s logic and control flow.

PrivateLoader retrieves the content from this URL via an HTTP GET request. The response contains an unknown DWORD followed by encrypted data. To decrypt the data, first some of the bytes are replaced as shown in Table 1.

The campaign ID passed in from the loader component is mapped to one of 33 campaign names as shown below in Table 2.

The sample analyzed for this blog post was configured with campaign ID 27 which maps to WW_P_7. The campaign a particular sample is associated with determines what payloads are downloaded and executed. For some campaigns, the payload URLs are hardcoded into the main component (see the decrypted strings listing), while for others the payload URLs are retrieved from the C2.

Some campaigns are also interested in a victim's cryptocurrency and banking activity. PrivateLoader performs this action by searching a large number of file paths, registry keys, browser extensions, and saved browser logins for the following broad groups (see the decrypted strings listing for details):

The wallet and/or saved login data themselves aren’t exfiltrated, rather PrivateLoader just checks for the existence of them. This data is likely used to help determine follow-on payloads such as stealer or banking malware that can make better use of the credentials.

The POST data contents in the data field and corresponding response data can be decrypted as follows:

Once decrypted, an example C2 beacon looks similar to the following:

Each field is pipe delimited and contains the following parameters:

In this example the JSON object contains:

The response data depends on the command and can contain a simple status message (e.g. “success”) or a JSON object.

C2 commands may include the following values:

As an example of the GetLinks command, a listing of payload URLs returned for the analyzed sample’s campaign on 04/14/2022 is available here. Some of the payload URLs are encrypted similarly to how the main component was encrypted, while others are unencrypted PE executable files.

PrivateLoader is a typical downloader malware family that provides a PPI service that has gained traction as a viable malware distribution method for multiple threat actors. PrivateLoader is currently used to distribute ransomware, stealer, banker, and other commodity malware. The loader will likely continue to be updated with new features and functionality to evade detection and effectively deliver second-stage malware payloads. 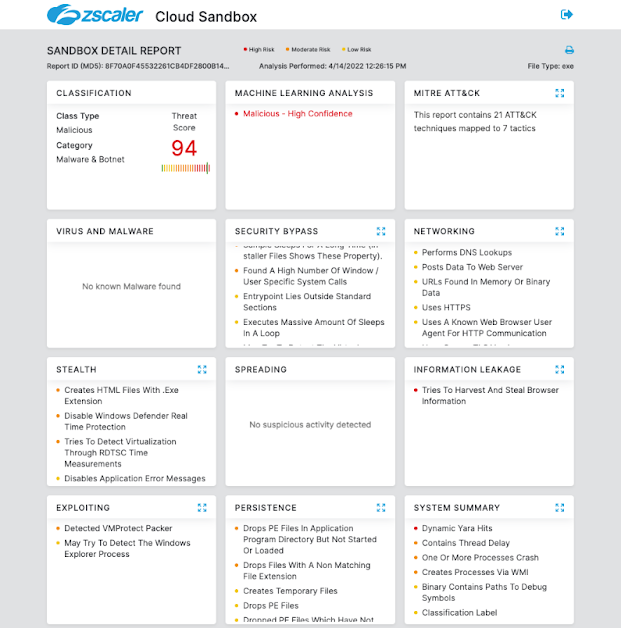