Since the beginning of 2022, ThreatLabz has been closely monitoring the activities of the Evilnum APT group. We identified several instances of their low-volume targeted attack campaigns launched against our customers in the UK and Europe region.

The new instances of the campaign use updated tactics, techniques, and procedures. In earlier campaigns observed in 2021, the main distribution vector used by this threat group was Windows Shortcut files (LNK) sent inside malicious archive files (ZIP) as email attachments in spear phishing emails to the victims.

In the most recent instances, the threat actor has started using MS Office Word documents, leveraging document template injection to deliver the malicious payload to the victims’ machines. In this blog, we present the technical details of all components involved in the end-to-end attack chain. At the time of writing, to the best of our knowledge, the complete attack chain of this new instance of Evilnum APT group is not publicly documented anywhere.

ThreatLabz has identified several domains associated with Evilnum APT group which have not been previously detected by security vendors. This discovery indicates that the Evilnum APT group has been successful at flying under the radar and has remained undetected for a long time. 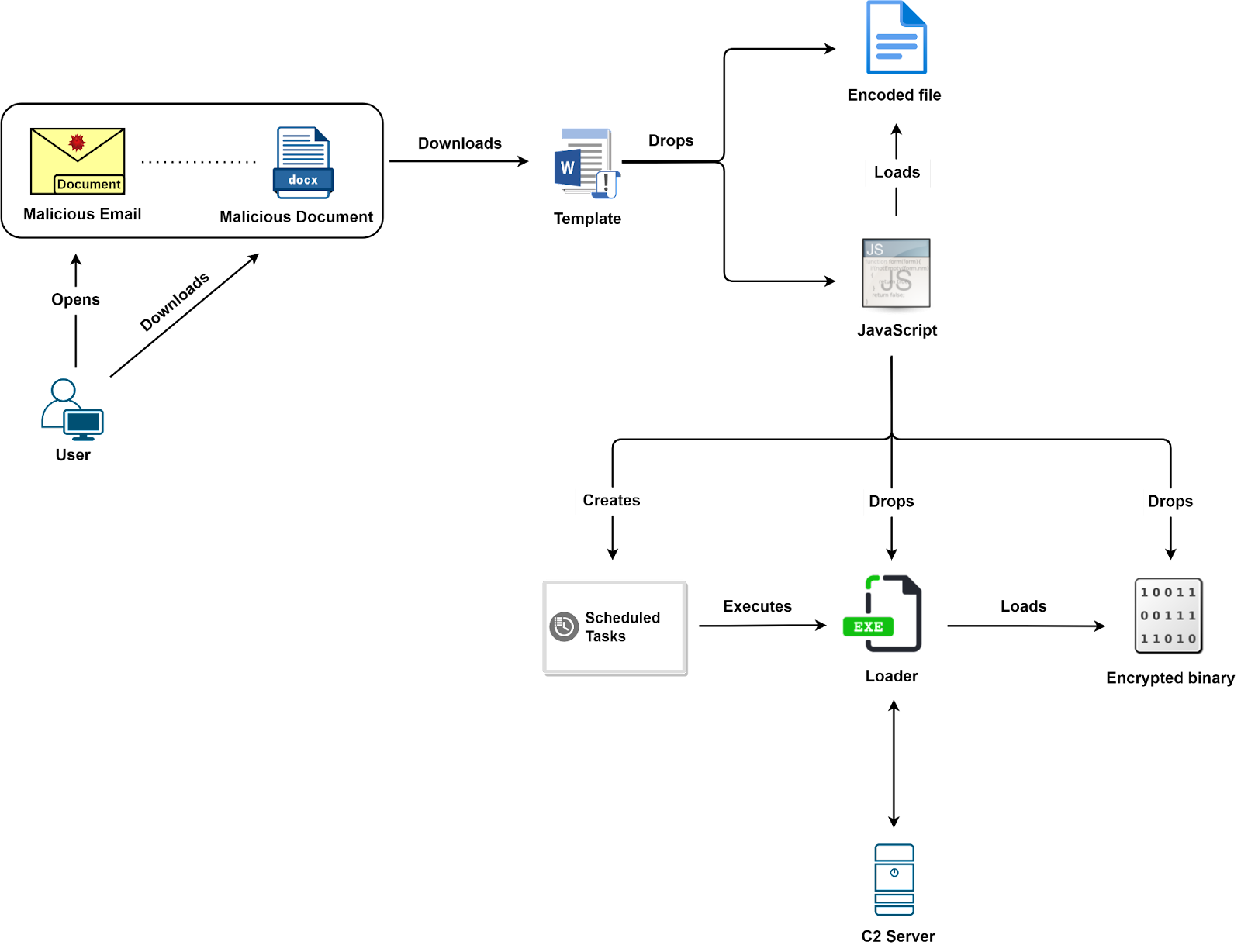 The stage 1 malicious document is delivered via spear phishing email. Once the user downloads and opens the malicious document, it fetches the stage 2 macro template from the attacker-hosted domain and displays the decoy content as shown in Figure 2 asking the user to enable the macro content. 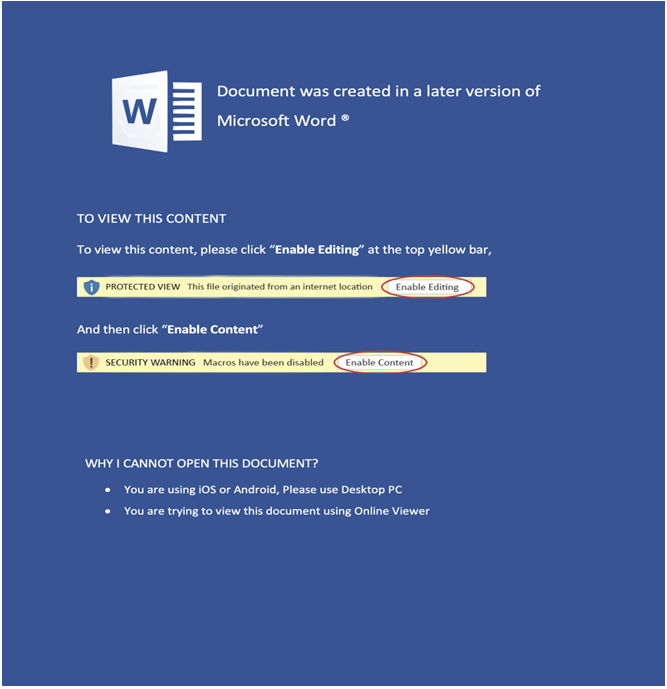 The stage 2 template contains the main malicious macro code. It makes use of VBA code stomping technique which is fairly uncommon in the wild. This technique destroys the original source code and only a compiled version of the VBA macro code (also known as p-code) is stored in the document.

As a result, this technique prevents static analysis tools such as olevba from extracting the decompiled VBA code.

Using the technique mentioned by the Walmart team here, we were able to extract the full macro code.

All the strings in the macro code are decrypted using the string decryption function shown in Figure 3. 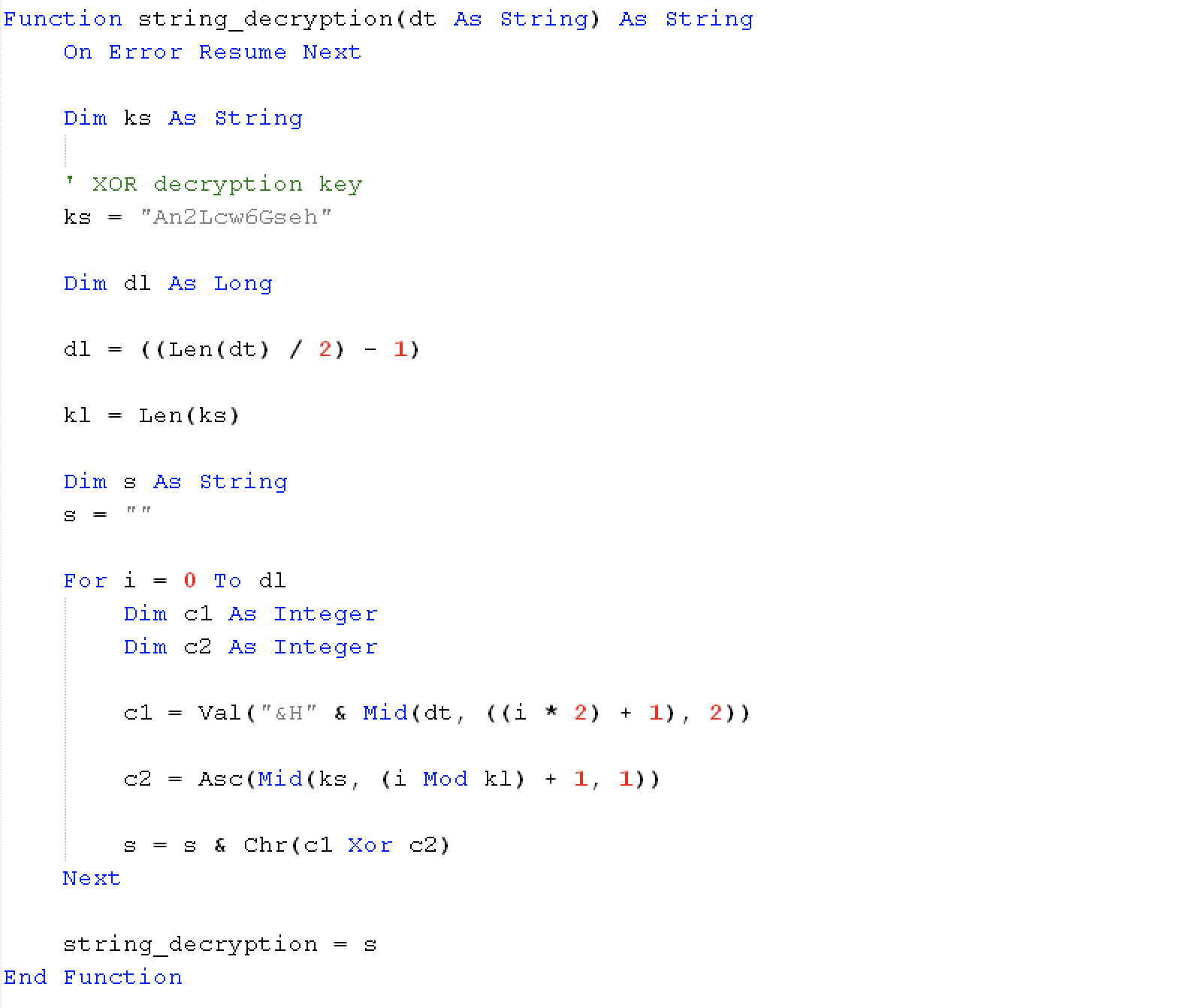 Below are the key functionalities of the macro.

1. The document file has two text boxes with encrypted contents. These textboxes will be decrypted at run time by the VBA macro code.

a) Textbox 1 - msform_ct.TextBox1.Text. This will be decrypted and contents will be written to %appdata%\"ThirdPartyNotices.txt"

b) Textbox 2 - msform_ct.TextBox2.Text - This will be decrypted and contents will be written to "%appdata%\Redist.txt"

2. Copies the legitimate Windows binary Wscript.exe to a file with the name "msdcat.exe". Such file copy operations are done by malwares as a way to bypass endpoint security products.

3. The file - Redist.txt contains the obfuscated JavaScript which will be executed with the following command line:

4. During the course of execution of VBA macro code, there are multiple calls to doc.Shapes.AddPicture() which fetches a JPG image from the attacker-controlled server. We believe this was done by the attacker to trace and log the execution of code on the endpoint.

The original JavaScript dropped by the VBA-based macro code is heavily obfuscated. We will highlight some of the unique obfuscation techniques used which are rarely observed in obfuscated JavaScripts.

There are two parameters passed to this JavaScript at the time of execution with following command line:

parameter 1: "dg". This string is later used in the string decryption function in JavaScript.

parameter 2: The file "ThirdPartyNotices.txt" contains the encrypted code which will be decrypted and dropped by the JavaScript on the filesystem with binary name - SerenadeDACplApp.exe

Most obfuscation techniques involve a large array of encrypted and encoded strings which are referenced throughout the code using indexes. A common approach to deobfuscate this requires multiple "search and replace" operations where you replace the reference with the actual decrypted and decoded string.

JavaScript in this case used an interesting technique where the original array of strings was shuffled, and would be unshuffled in memory at the time of execution. So, any attempt to dereference the strings without unshuffling the array would result in an error. Such a method can be used to deter reverse engineering and also bypass some tools which try to automate the process of deobfuscation.

Let's look at it in more detail.

Figure 5 below shows the huge array of strings defined at the beginning of the JavaScript. This array is wrapped inside a function as an extra layer of obfuscation. 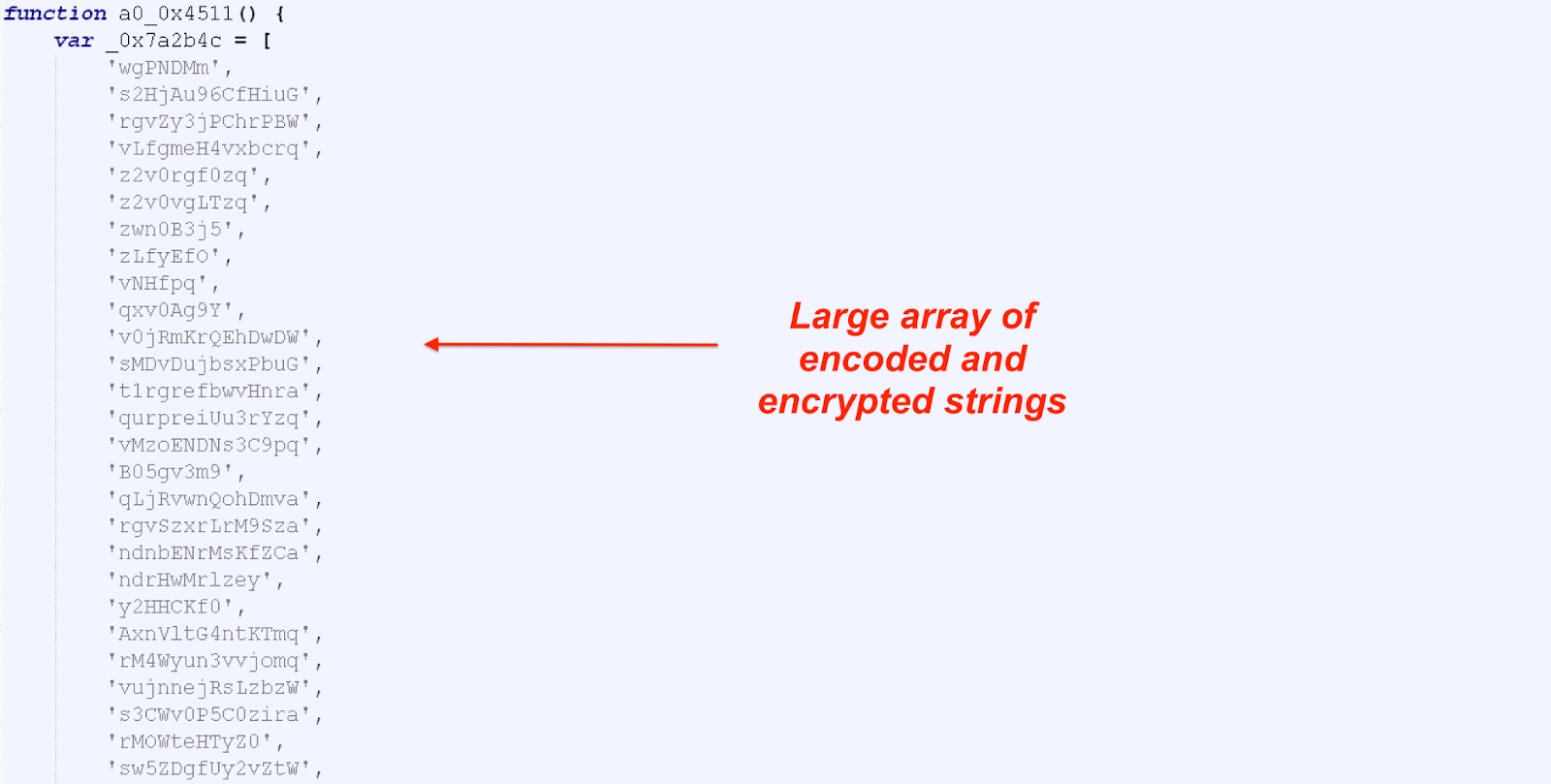 The next step is to unshuffle the array. Figure 6 below shows the relevant JavaScript code which uses a brute force approach to unshuffle the array. It has a predefined seed of value "0x6467a". Upon each iteration, the function computes a seed using various mathematical operations and compares it with the predefined seed "0x6467a". The function continues to shift the contents of the array by one position to the right until this condition is satisfied.

Relevant comments are included in the code to illustrate the unshuffling logic.

Other techniques used for obfuscation involve control flow flattening techniques which leverage switch-case obfuscation. Figure 7 shows one of the string decryption functions which uses such an obfuscation technique.

The sequence of steps of decryption are shuffled using switch-case and the order is followed according to the following sequence:

We can re-write the string decryption function as shown in Figure 8 which is easier to analyze. 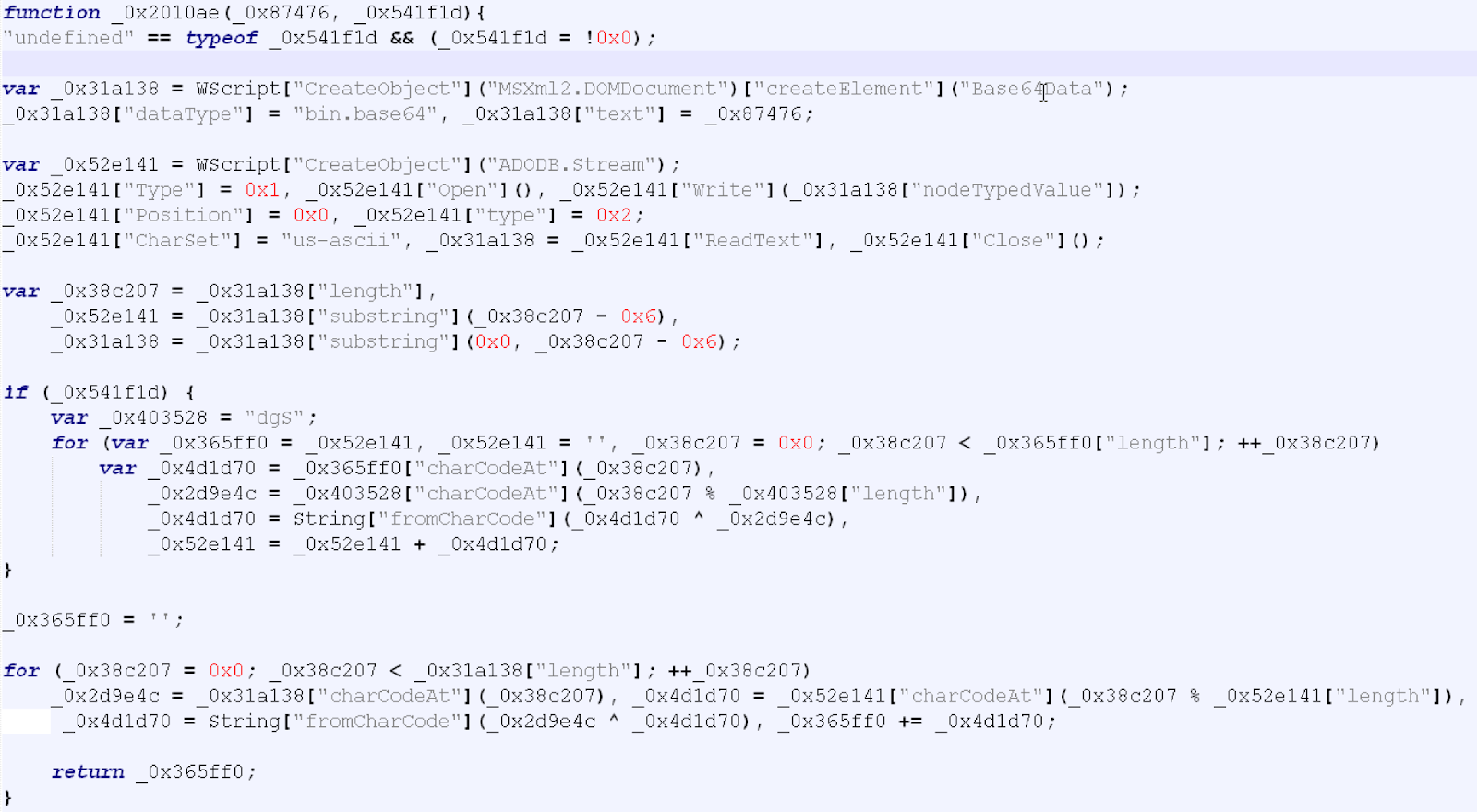 We have included a list of interesting decrypted strings extracted from the JavaScript in Appendix I.

The threat actor achieves persistence via Scheduled task. During JavaScript execution, a scheduled task with the name "UpdateModel Task'' will be created to execute the dropped loader binary with required command line arguments.

As described in previous section, the JavaScript drops two files:

a) An executable file (SerenadeDACplApp.exe) - It turns out to be a loader

b) A binary file (devZUQVD.tmp) - This is the file loaded during runtime by the loader

The loader is executed by the scheduled task along with the required arguments. During the course of its execution it performs following operations:

1. Performs command-line checks and extracts the file name for the binary to be loaded

The loader checks if the command-line ends with ("). If true then it will terminate the process else it will parse the arguments to extract the file name for the binary file to be loaded.

# There are two code logics to extract the file name

The decrypted content turns out to be a PE file that uses a custom format for storing the PE header and section header information.

7. Using the Heaven's gate technique calls the NtAllocateVirtualMemory API to allocate memory for the PE file to be mapped.

Note: The size is taken from the PE header format described above.

9. Using Heaven's gate technique calls the NtCreateThreadEx API to create a thread pointing to the entry point of mapped PE.

Note: The loader uses Heaven's gate technique to evade endpoint security products as well as syscall or API monitoring applications. It uses a custom header format to thwart memory scanning for PE header or section header patterns and also makes it difficult to dump and analyze the PE file as a standalone executable.

The mapped PE is the main backdoor of the attack chain. On execution it performs the following operations:

1. Decrypts  the backdoor configuration which includes :

2. Resolves API addresses for the libraries retrieved from the configuration

4. Builds data exfiltration string to be sent as part of the beacon request

5. Encrypt and Base64 encode the generated string 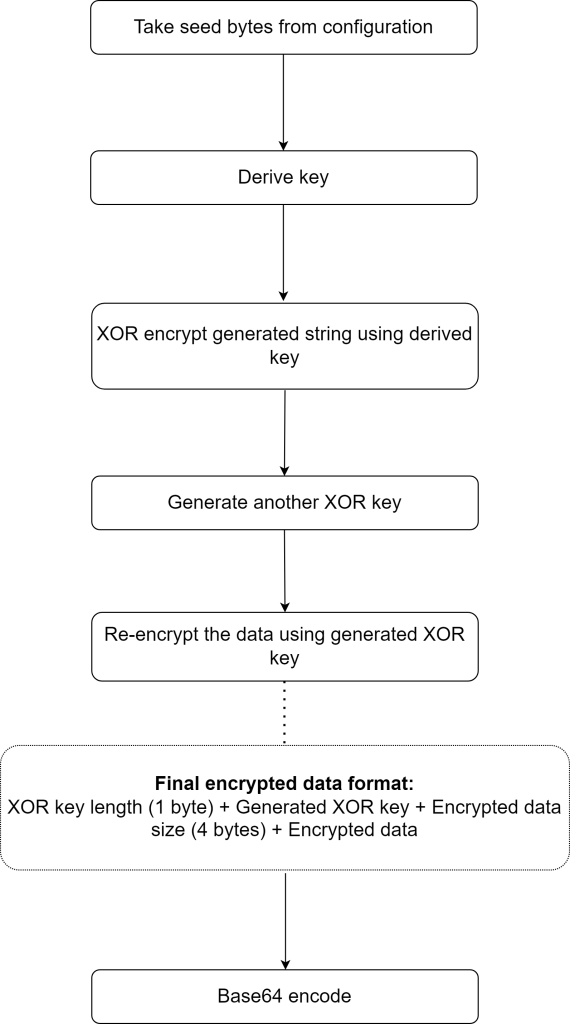 Figure 12: Steps performed for encrypting and encoding the exfiltrated data

Note: You can find the decryption code under Appendix III section

6. Embed the encoded string inside the cookie header field by selecting one of the cookie type strings from the configuration.

Once all the above operations are done. The backdoor selects one of the C2 domains and a path string from the configuration and sends the beacon network request.

If the beacon request is successful, the backdoor will query the server for available content and download it.

Based on the content size two different operations are performed:

1. If the content size is 4 then the backdoor checks if the downloaded data is equal to "01". If true, it takes the machine snapshot and sends it to the C2 server via POST request. The snapshot data is exfiltrated in encrypted form with the cookie header containing additional information.

2. If the content size is greater than 4, then the backdoor decrypts the downloaded data and executes it. 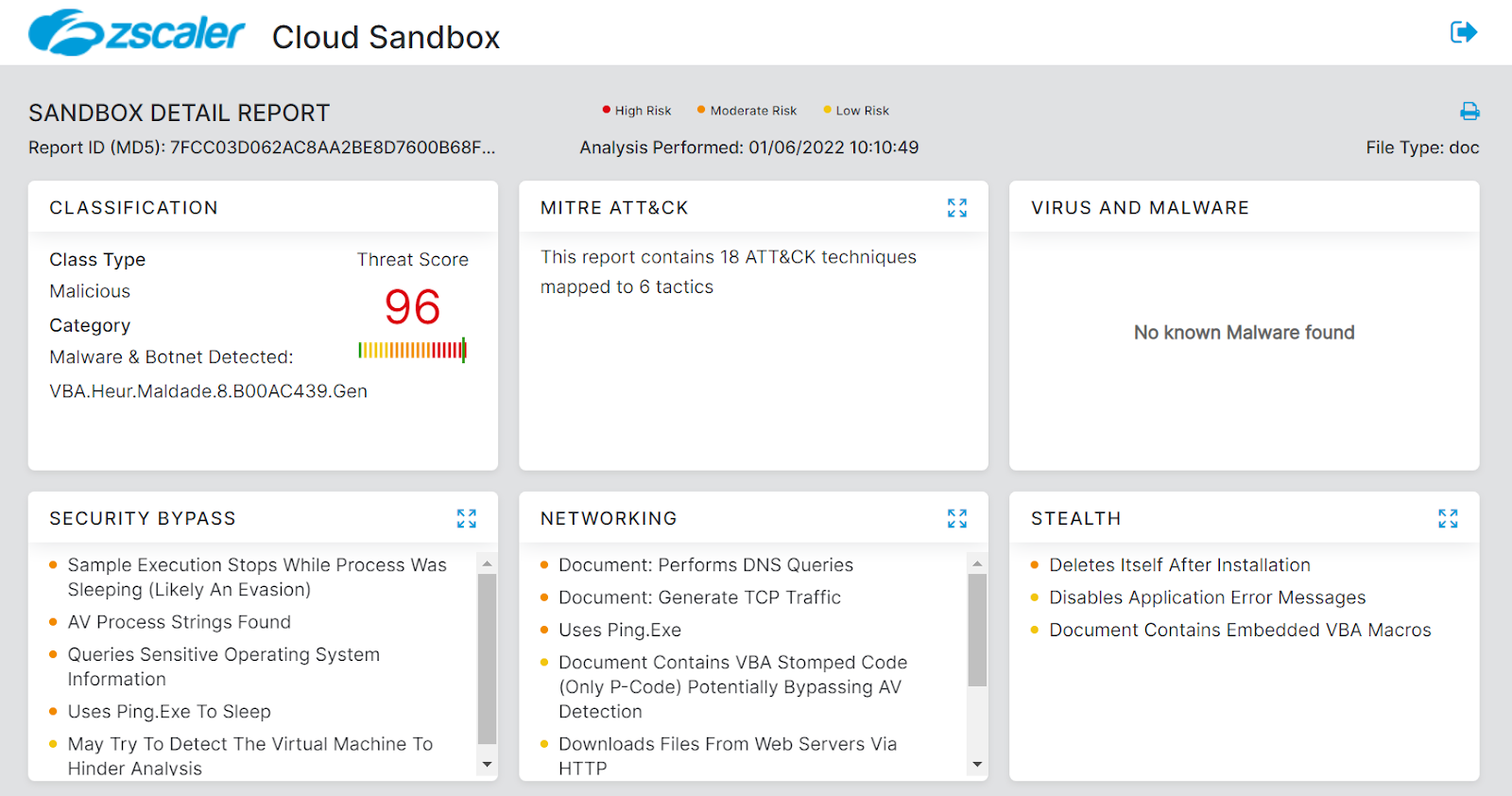