It's always fascinating to see how a major global event can impact Internet traffic patterns. There aren't many sporting events larger than the Super Bowl, so we took a look at the web traffic that we were seeing on the day of the event and leading up to it. Even though Zscaler has enterprise customers and therefore most traffic traverses our cloud during the work week, an event the size of the Super Bowl is sure to influence our overall stats. First off, we took a look at web traffic categorized as Sports, Streaming Media and Gambling for Super Bowl week. 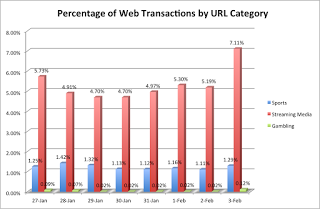 Not surprisingly, Streaming Media traffic peaked on Super Bowl Sunday to represent 7.11% of all Zscaler transactions. This was no doubt due to the fact that the game was available over the Internet on a variety of platforms including CBS.com, NFL.com and various mobile apps. Streaming traffic on Super Bowl Sunday represented a dramatic 37% jump from the previous day. Web traffic classified as Sports also saw a jump, but it was not nearly as significant. Perhaps everyone was too busy watching the game live to be reading about it and checking player stats. 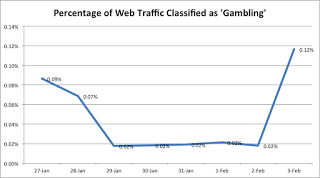 The most interesting traffic patterns come from traffic to gambling sites. As we've noted in past posts, gambling traffic often jumps when major sporting events occur and it would appear that the 2013 Super Bowl was no exception. Interestingly, while it reached it's peak on game day, jumping a whopping 600% from the previous day, it would appear that gamblers were also lining up the odds the prior weekend as well. If you fell into this last statistic, hopefully you were pulling for the Ravens.