Key Takeaways: An in-depth analysis of Midas and trends across other Thanos ransomware variants reveals how ransomware groups shifted tactics in 2021 to:

Advertised on the darkweb for Ransomware-as-a-Service (RaaS), Thanos ransomware was first identified in February 2020. Written in C# language running on the .net framework, this serious offender reboots systems in safeboot mode to bypass antivirus detection and includes a builder that enables threat actors to create new variants by customizing samples. Source code of Thanos builder also leaked and there are lots of different variants that have been seen based on that. Here we discuss the four 2021 variants shown in Figure 1 below that used double extortion tactics. 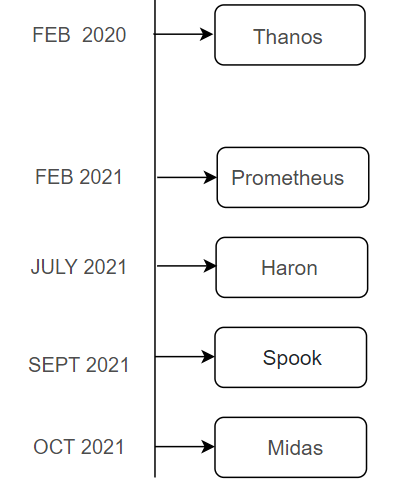 Beginning in February 2021, the Prometheus ransomware variant emerged as one of the new Thanos built variants of the year. It encrypts files and appends “.[{ID}],.PROM[prometheus[email protected]{.}ch] , {ID}[[email protected]{.}com] “ extension and drop “RESTORE_FILES_INFO.txt, RESTORE_FILES_INFO.hta” ransom note. The Prometheus group which operates the variant has claimed to be part of the notorious REvil ransomware group responsible for the Kaseya supply chain attack, however experts doubt the claim as a solid connection between the two has never been established.  This variant is known for using double extortion techniques to make organizations pay that include threatening to leak valuable data on their leak site. A quick check reveals that the leak site is currently down, but the threat still holds potential weight

In July 2021, another  Thanos derived ransomware called Haron was discovered. It encrypts files and appends  “.{Targeted Company name}” extension and drops “RESTORE_FILES_INFO.hta,RESTORE_FILES_INFO.txt” ransom note. Haron ransomware group also have their own data leak site used for double extortion. This variant has striking similarities with Avaddon ransomware based on examination of the ransom note and data leak site information.

Rounding out the year in October 2021, another Thanos ransomware family emerged with the Midas variant that appends “.{Targeted Company name}” extension and drops “RESTORE_FILES_INFO.hta and RESTORE_FILES_INFO.txt” ransom note. In January 2022, ThreatLabz investigated a report of Midas ransomware being slowly deployed over a 2-month period and the attacker was observed using different powershell scripts, remote access tools and an open source windows utility.

Like the others, Midas features its own data leak site for double extortion. Interestingly, the site contains leaked victim data from a Haron ransomware attack, suggesting to researchers that Midas is potentially linked to the Haron ransomware operators. 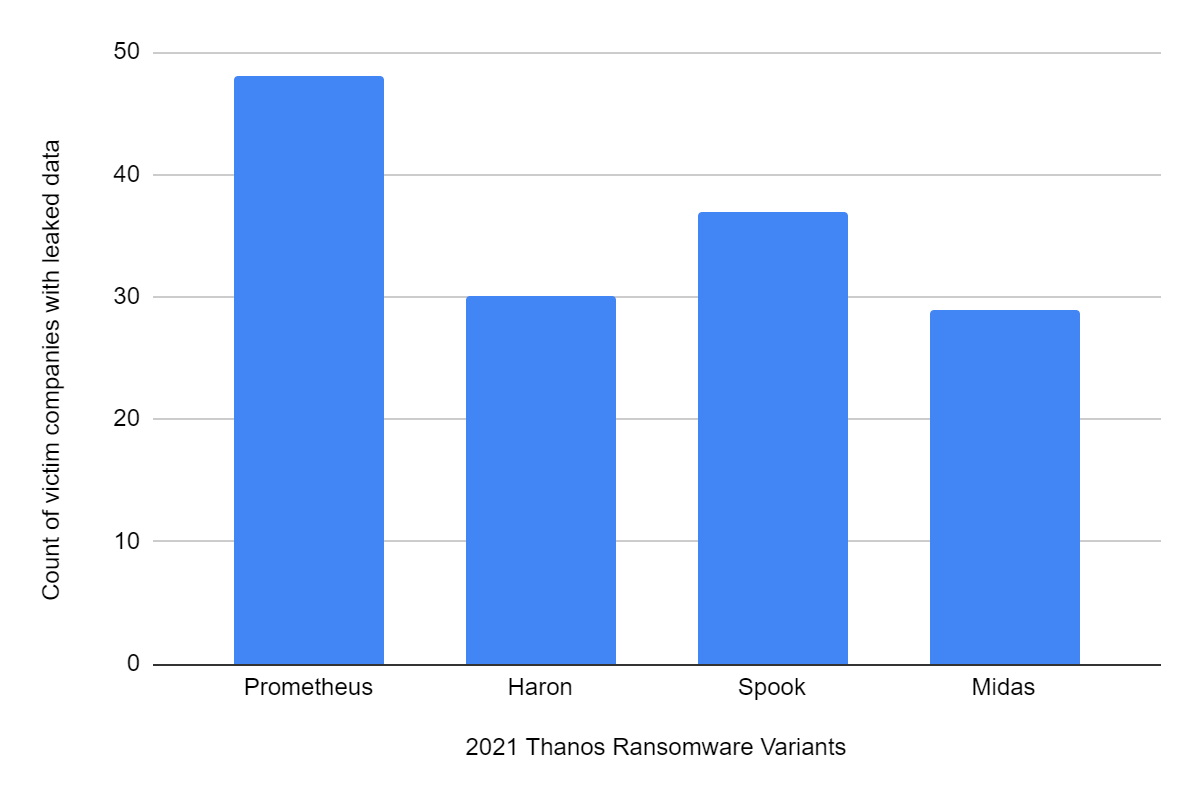 Identifying Thanos as the Source for the  Prometheus, Haron, Spook, and Midas ransomware variants

Tracing the evolution of Thanos based ransomware variants back to the source provides threat researchers with an inside look at how ransomware gangs operate and evolve over time. To establish a connection between each variant, the ThreatLabz team looked for the use of common signatures and indicators that would point back to the Thanos ransomware builder. After determining that each variant was derived using the builder, the team set about analyzing the similarities and differences in the shifting techniques adversaries employ to make new variants of a common origin ransomware more effective. These observations help us to gain insights into the cooperation happening between adversary groups and better understand the development lifecycle and alternating impacts of ransomware through its variants.

The analysis that follows walks you through identifying Thanos variants through an examination of common signatures found in the ransom note key identifiers and the consistent use of a common file marker “GotAllDone”. Followed by an in-depth analysis of the latest Midas variant.

All four of the 2021 Thanos based ransomware variants contain a key identifier with common signatures for the Thanos builder found in the ransom notes as shown in Figure 3 below. 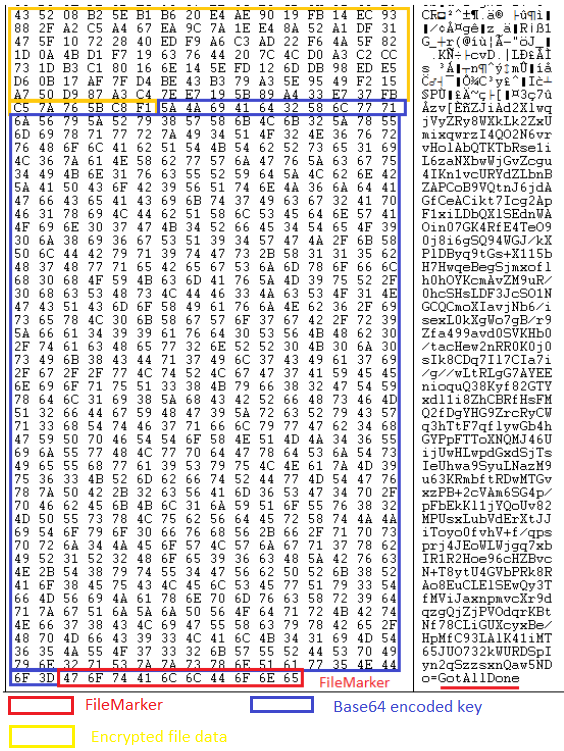 Figure 4: Screenshots of FileMarker and Base64 encoded key appended 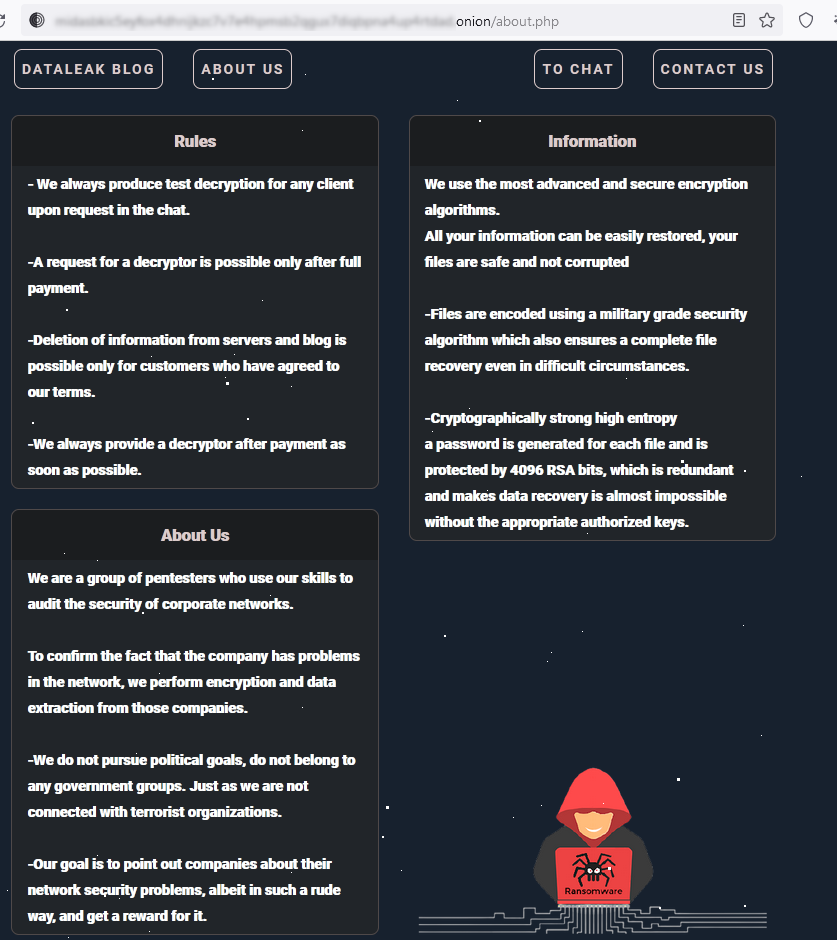 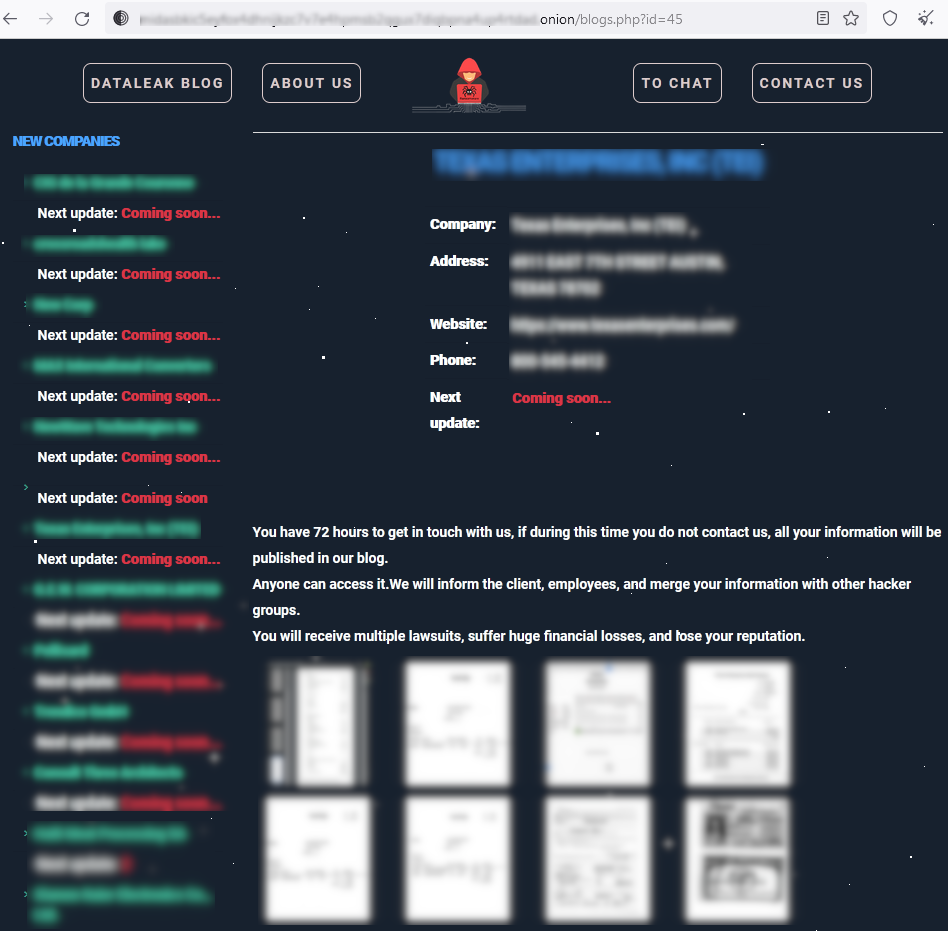 Midas ransomware is written in C# and obfuscated using smartassembly. Once executed this variant starts terminating processes using taskkill.exe. It terminates processes that inhibit encryption processes and processes related to security software, database related programs so it can encrypt more files. Below is a list of the common processes typically terminated by Thanos based ransomware.

It also deletes the process, schedule task and registry related to the Raccine tool. It is a ransomware prevention tool that protects the system from ransomware processes to delete shadow copy.

Figure 7: Command used to terminate Vaccine process and other artifacts.

Another technique used by most variants of Thanos based ransomware is to evade detection by  finding and terminating processes for analysis tools by searching the list of keywords shown below:

Further, it changes the configuration of specific services as shown below.

It deletes shadow copy using powershell command so the system is unable to recover data.

Midas ransomware searches through each drive and directory and encrypts the files. It creates a random key and encrypts a file using Salsa20 algorithm. Then the Salsa20 key is encrypted by the RSA public key as shown in the screenshot below. The encryption key is encoded in base64 and appended to each impacted file. It also added FileMarker “GotAllDone” at the end of each encrypted file. The encrypted key is also saved in the Registry under “HKEY_CURRENT_USER\SOFTWARE\KEYID\myKeyID”. After encryption, it drops the “reload1.lnk” file to open a ransom note at every restart.

It encrypts the file contained below extensions: 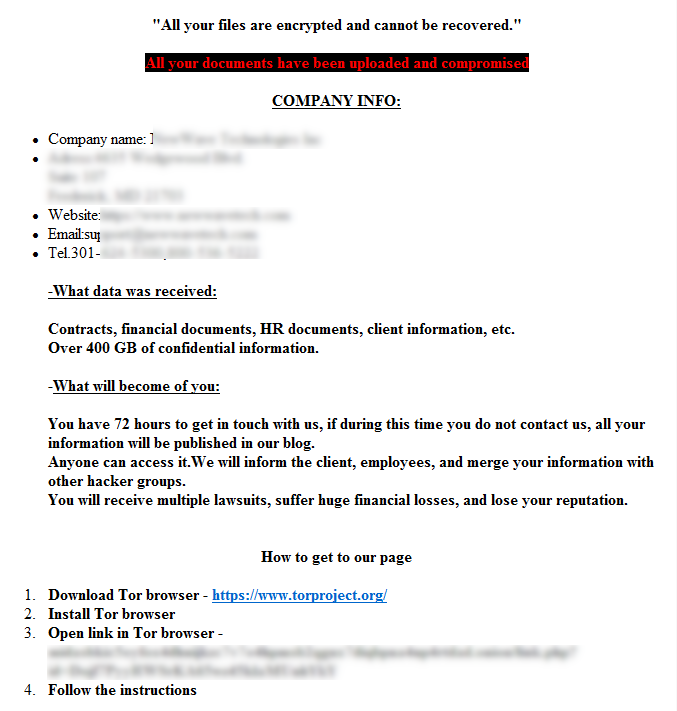 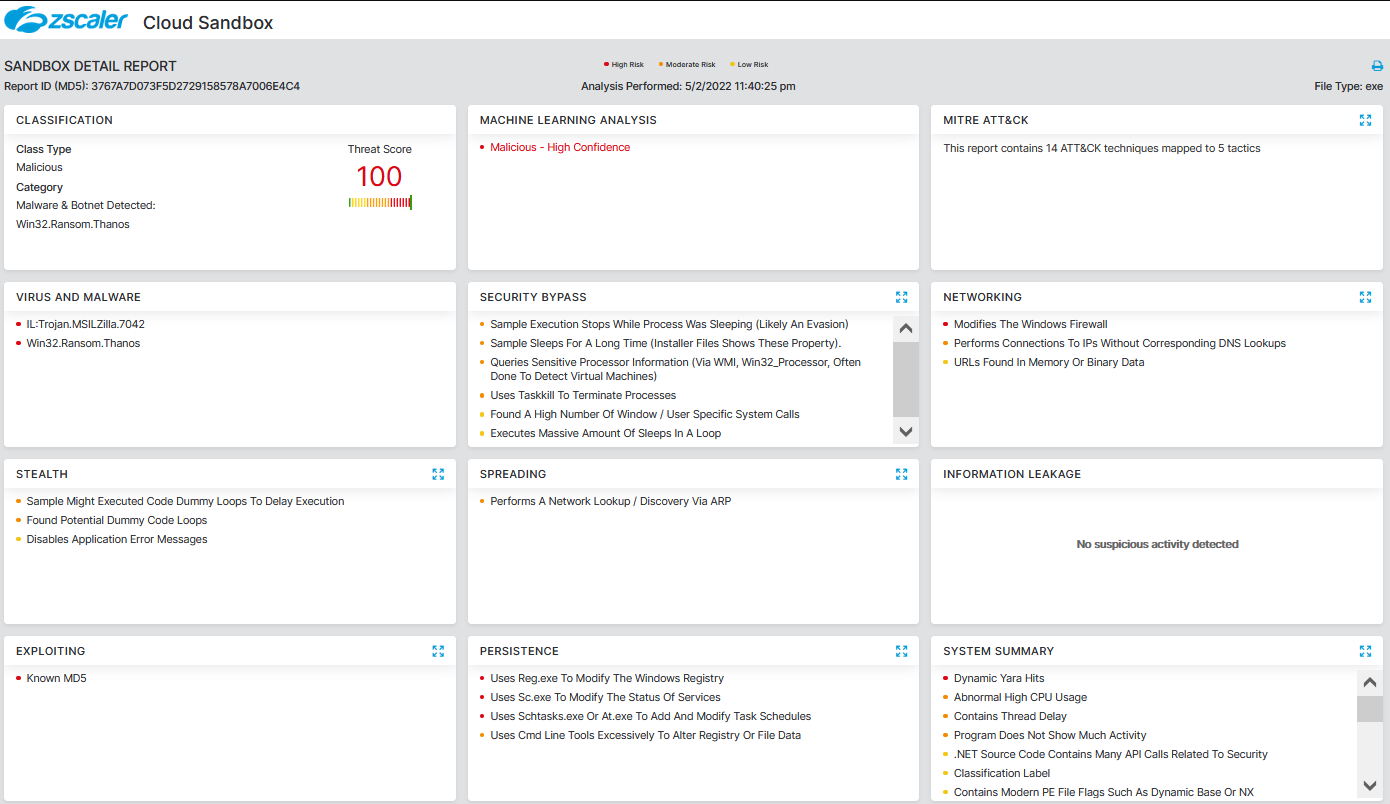