On 23rd Feb 2022, a new sophisticated malware family known as Hermetic Wiper was discovered that targeted organizations in the Ukraine with an objective of destroying data and causing business disruption. Hermetic Wiper appears to have been used in conjunction with another malware family that disguises itself as ransomware. This secondary malware known as PartyTicket has the SHA256 4dc13bb83a16d4ff9865a51b3e4d24112327c526c1392e14d56f20d6f4eaf382 and was written using the Go programming language. The first PartyTicket sample that was submitted to a public malware repository on 2022-02-23 22:29:59 UTC.

PartyTicket is quite distinct from typical ransomware families in that the design and implementation looks rushed and unsophisticated. For example, PartyTicket does not terminate processes such as databases and other business applications prior to encryption. Therefore, the number of potential files that can be encrypted is limited since many applications may have open file handles. In addition, the malware generates a 32 character alphanumeric key using the Go programming language’s random function, which is deterministic. Therefore, the AES encryption key can be recovered and used to decrypt files. PartyTicket also stands out with numerous references that mock U.S. President Joe Biden as shown in Figure 1.

The malware takes a single command-line argument, which is the filename to encrypt. If the malware is launched without any arguments, it builds a list of files to encrypt. For every file in this list, the malware creates a new copy of itself using a name generated by calling the UUID Go library function, which is based on the current timestamp and system’s MAC address.

The new PartyTicket copy is then executed passing a filename to encrypt. This design choice is very odd because it slows the system down significantly, because a new process is created to encrypt every file. In addition, the numerous copies of the malware that are created fill up disk space, since the malware binary is larger than 3MB. Figure 2 shows an example of the numerous PartyTicket executables that were created during file encryption. 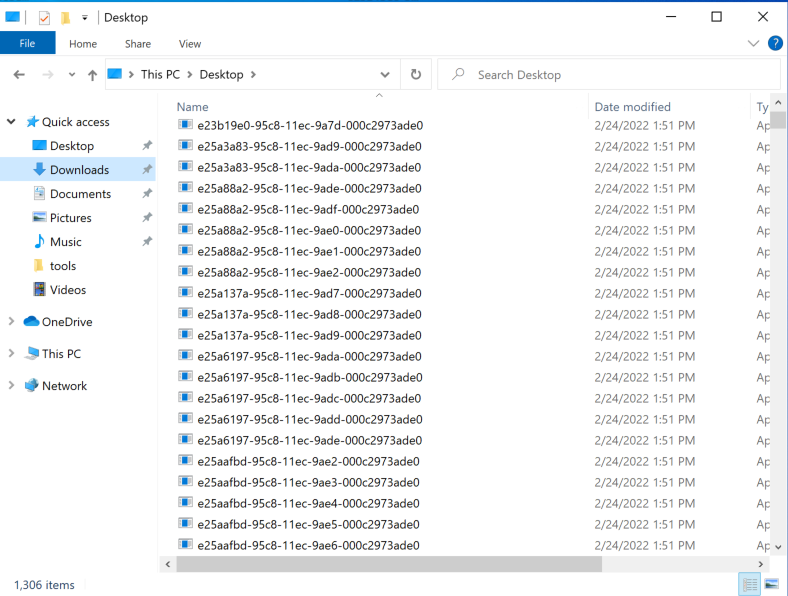 PartyTicket enumerates all files that have the extensions shown in Table 1.

Files that are located in the Windows and Program Files folders are skipped. Before file encryption, the targeted file is renamed with the extension .[[email protected]].encryptedJB as shown in Figure 3. 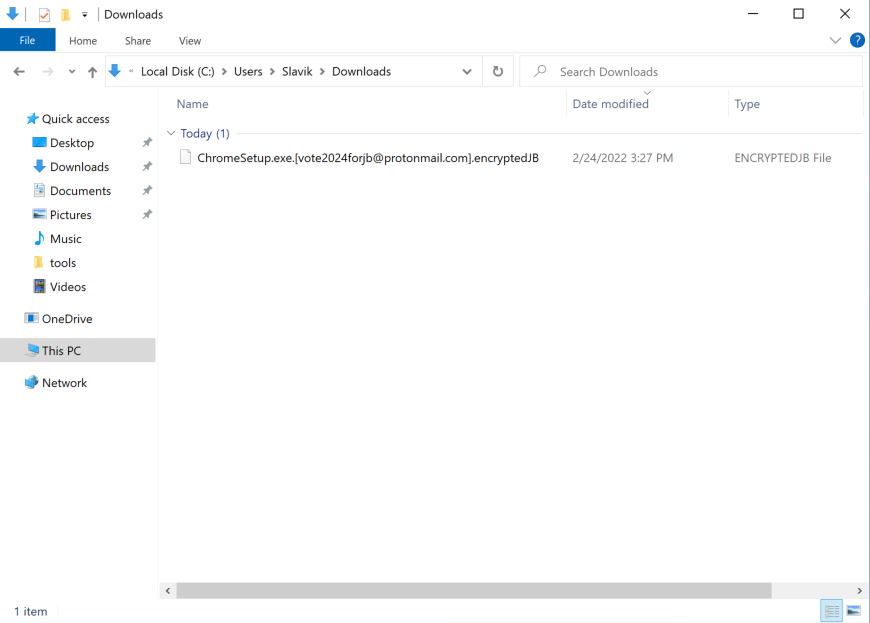 The malware embeds a hardcoded 2,048-bit RSA key that is Base64 encoded. The modulus and exponent after the string has been Base64 decoded is the following:

PartyTicket uses this RSA public key to encrypt the AES key that is used for file encryption. Files are encrypted with AES in GCM mode using a 32-byte alphanumeric string that is created using the Go function math.rand.Int(), which is deterministic and therefore not cryptographically secure. The encrypted file format consists of the first 12 bytes used as the AES-GCM nonce, followed by the AES encrypted data, a 16-byte AES-GCM authentication tag, the RSA encrypted AES key, and finally appended with the string marker ZVL2KH87ORH3OB1J1PO2SBHWJSNFSB4A.

After each file is encrypted, the corresponding temporary copy of the ransomware is then deleted.

The ransom note is written to the user’s desktop using the filename read_me.html. An example ransom note, when rendered in a web browser, is shown in Figure 4.

The special ID value is generated by calling the Go UUID function and does not serve any purpose.

We have ensured coverage for the payloads seen in these attacks via advanced threat signatures as well as our advanced cloud sandbox.

Figure 5 below shows the sandbox detection report for PartyTicket. 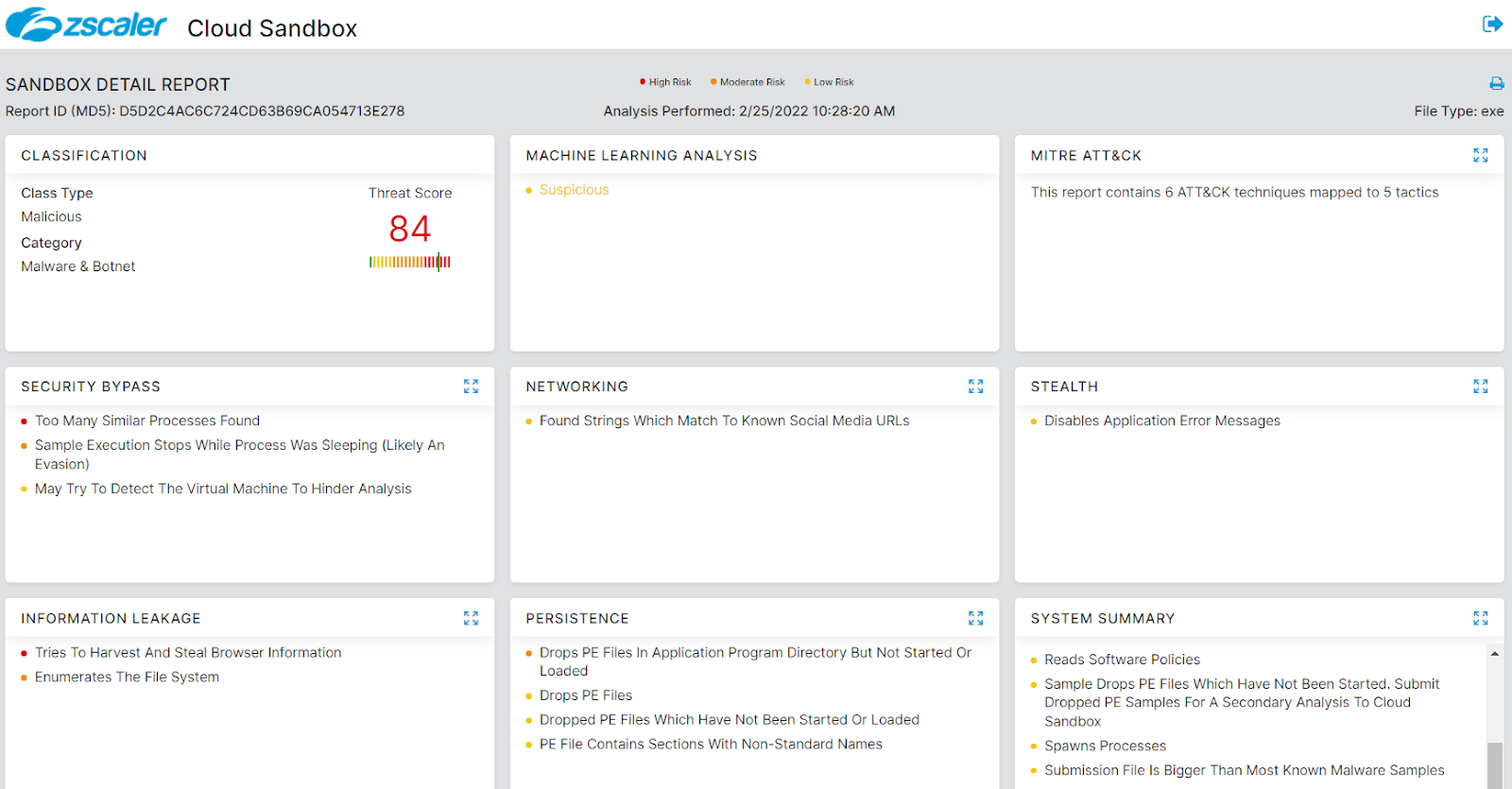