A report of the malicious JavaScript on robint.us can be seen in this Wepawet report. I noticed that within the JS, the variable name "cuteqq" was used for evaluating the payload - this sounded really familiar. Google "cuteqq malware" and 784 results returned ... CuteQQ is actually a browser exploit toolkit that was popular during 2008. Google for "var cuteqq" and there are several more interesting results including those marked "This site may harm your computer."

Here is a VirusTotal report for an early version of the CVE-2010-0249 ("Aurora") exploit, showing that the malicious binary was authored by the "Cuteqq Software Team" 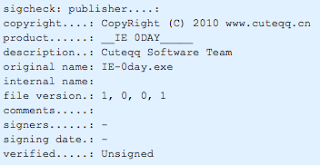 "Cuteqq" does seem to have its usage in several Chinese exploits / variable names. (QQ is a popular Chinese web service for email, chat, news, etc.)

VirusTotal analysis of the actual payloads shows that most A/V vendors (including our inline A/V solution) detect the malicious payloads dropped by the infected webservers:

Neither of these payloads attributed themselves to the "Cuteqq" team directly within the binary signature / authorship information.

WHOIS information for the two domains related to this incident show CN attribution: