ThreatLabZ, the security research team at Zscaler, is responsible for monitoring and tracking global cybercrime activity, which typically drops each year around the Russian Orthodox Christmas on January 7th. In most years, activity increases back to normal near the middle to end of January. However, in 2021, cybercrime activity did not exhibit this cyclical pattern, which may be explained by COVID-19 travel restrictions that prevented many threat actors from taking an extended leave.

Figure 1 shows that cybercrime activity last year began to rise starting around January 15, 2020, following a lull. In contrast, this year’s criminal activity remained at normal levels before, during, and after the Russian Orthodox Christmas. 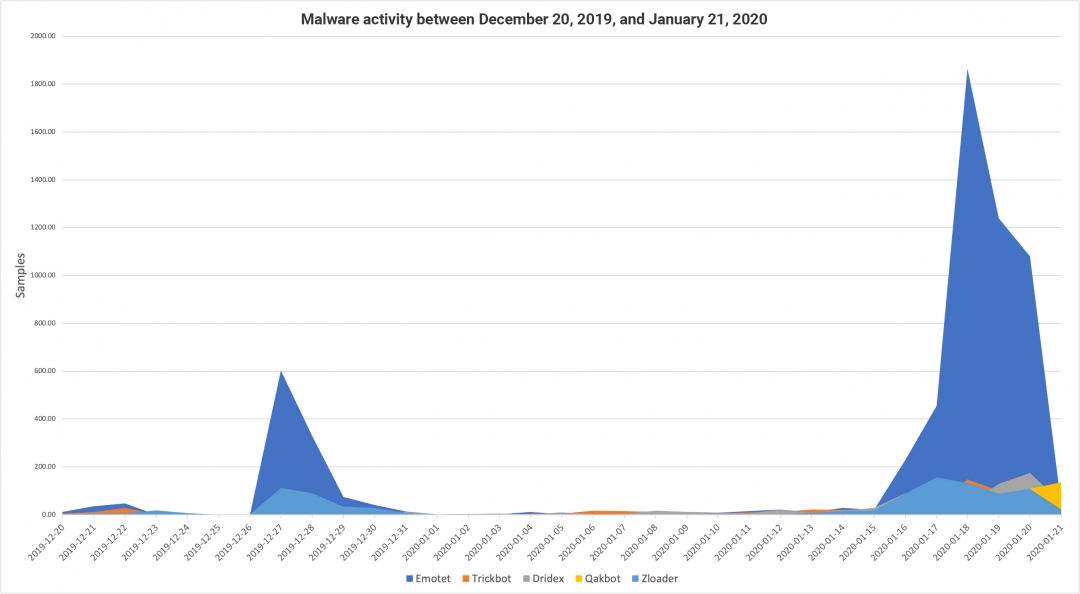 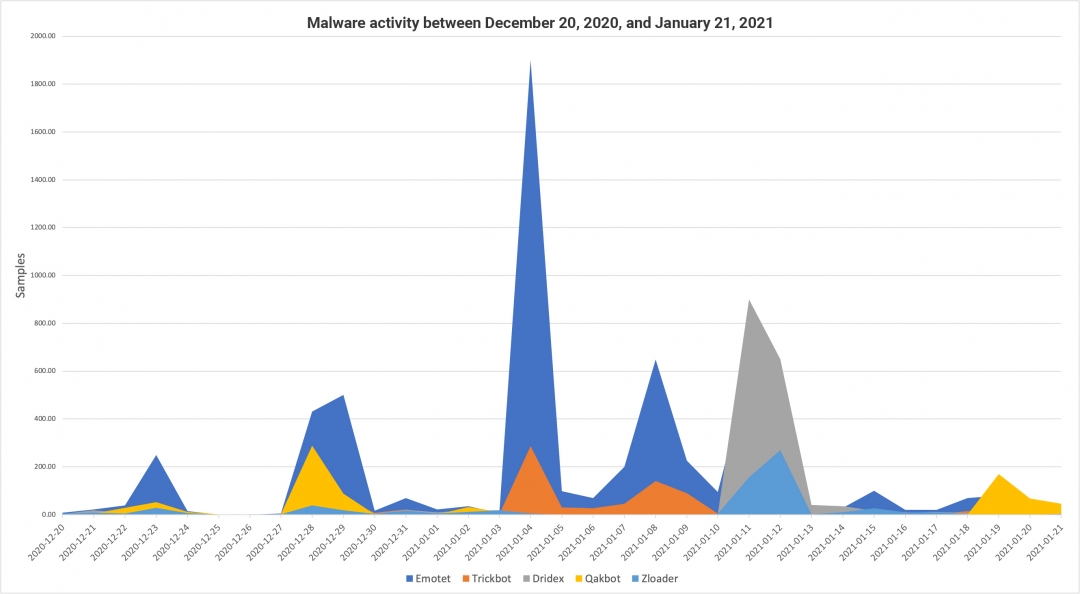 The following sections describe recent activities for five of the top malware families, including Emotet, Trickbot, Dridex, ZLoader, and Qakbot.

[Update] – On January 27, 2021, Europol announced a global action in disrupting Emotet botnet operations. This was a collaborative effort between law enforcement authorities in the Netherlands, Germany, U.S., UK, France, Canada, Lithuania, and Ukraine, with international activity coordinated by Europol and Eurojust.

Zscaler ThreatLabZ has been closely tracking Emotet for several years (see blogs from October 2019, February 2019, and August 2017). We can confirm that we haven't seen any updates or activity from the Emotet C&C infrastructure in the past 48 hours, which indicates that the takedown operation has been successful. However, we have seen similar gangs push out new variants and resurrect the botnet using a new C&C infrastructure. We are closely monitoring for any new Emotet variants and activity.

Emotet resumed its activity as of Monday, January 4, 2021. To take advantage of the holiday season, Emotet briefly ramped up its activity between December 21 and 30, 2020. During this ramped-up activity, Emotet was mostly using a reply chain (also known as email thread hijacking) spam email as the bait. A reply chain attack is when threat actors hijack real email threads and utilize legitimate email messages stolen from victims’ email applications. The threat actors then spoof a legitimate email and impersonate a reply to the stolen email. This email reply is again targeted to addresses from the original email, allowing it to further gain trust from targets.

While the first batch of emails was targeting English-speaking countries, spam emails in German, Italian, French,  Spanish, and Polish followed shortly thereafter. An example of an Emotet reply chain spam email in Italian is shown in Figure 3. 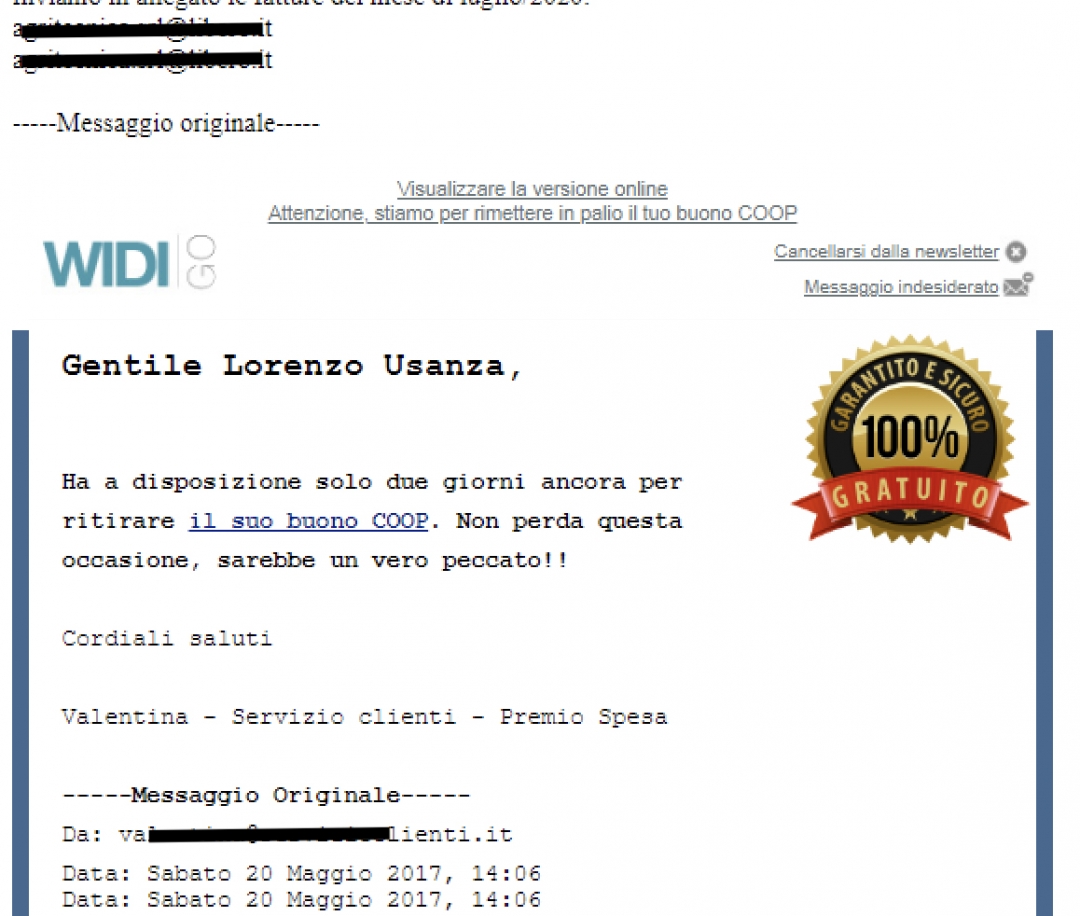 Another interesting tactical move by Emotet that started in January was the shift to password-protected ZIP attachments. Instead of including the password in the email body text, Emotet started using embedded images that contain the ZIP password. This tactic is likely to defeat automation deployed by security products and researchers.

The group has also continued to use a DLL file for the loader instead of a standard Windows executable, which may be to further evade detection. Emotet was last seen deploying the following modules:

In addition, Emotet has been observed delivering Trickbot as a second-stage payload.

Emotet started dropping Trickbot as a secondary payload on victim machines after it returned from the holiday break. Trickbot is operated by the same threat actor that deploys Conti and Ryuk ransomware. Therefore, these ransomware operations likely resumed around the same time as well. Emotet was distributing Trickbot with the group tags mor12 and mor13. There have not been any significant changes in Trickbot following the holiday break.

Trickbot was also distributed by another spam campaign on the same day by the group tag rob35. This specific campaign was being distributed via SpamEx, which distributed a malicious JavaScript file embedded in a ZIP file. When opened, the JavaScript was used to invoke PowerShell to download and execute Trickbot from phishing sites. The Trickbot campaigns with the group tags tot6 and lib6 have also been observed since the holiday break.

On January 11, 2021, ThreatLabZ observed the emergence of Dridex with a Cutwail spam campaign. The group used an invoice theme to distribute the Dridex loader. The Cutwail spam distributed payloads for Dridex sub-botnets 10444 and 10555 as Microsoft Excel attachments. Dridex continues using DLL files for the loader instead of Windows executables, a technique that has been recently employed by the Emotet and Qakbot threat groups as well.

There was another Dridex campaign with botnet 111 observed a day later, which was using the RIG exploit kit (EK). The same RIG EK gate was used before the Christmas holiday.

On January 19, 2021, Qakbot emerged with a new spam campaign dropping a Qakbot payload with the campaign ID abc118. Similar to Emotet, Qakbot is using reply chain spam email attacks. An example is shown in Figure 4. Qakbot was also seen using a “complaint copy" spam theme. Qakbot spam campaigns are distributing malicious Excel files embedded inside a ZIP attachment. Like Emotet, Dridex, and ZLoader, Qakbot is using a DLL file for the loader instead of Windows executables. This technique is now widely used by cybercriminals and is apparently able to evade security and sandbox solutions.

ThreatLabZ observed new ZLoader activity on January 11, 2021. The botnet then went quiet, resuming with another spam campaign on January 19. So far in 2021, four different ZLoader campaigns have been observed, primarily targeting US and EU banks and financial institutions.

Campaign frequency differs for each malware family. Some have more regular Monday through Thursday cycles, while others, such as Emotet and Qakbot, are unpredictable. Usually, inactivity by cybercriminals or the absence of a malware strain is a sign of impending changes. Malware authors continually adapt their techniques and change their code to improve distribution, persistence, evasion, and overall success.

ThreatLabZ continuously monitors activity from cybercrime gangs and their evolving malware strains, integrating all threat intelligence into the Zscaler platform so it can be distributed cloud-wide to protect all customers around the world.