We, like most in the security community, have been following the latest developments with the Mac OS X Flashback Trojan and it's exploitation of the recently patched Java vulnerability (CVE-2012-0507).  This story has a lot of interesting twists and turns:
From the perspective of Zscaler's Enterprise customers - we are indeed seeing Flashback infections, many of which include older variants of the Trojan. One C&C from an older variant for example that we are seeing, which has not been reported in the other stories is:
ASDFUH982HDODJC.COM
HTTP GET requests to this and other related C&Cs is done with a base64 encoded User-Agent (UA) that includes the CPU, hardware UUID, OS version, and other system/infection details - so each victim has a unique UA when connecting to the C&C.  The latest variant does not appear to use this same UA encoding.
Most/all of the malicious ".rr.nu" sites on 95.215.63.38 that hosted malware associated with the attack, are now down (resolve to 127.0.0.1).  Below is a screenshot of code from one website hosting the Java applet which exploited CVE-2012-0507:

The site meta-refreshes to a blank page if JavaScript is disabled or NoScript is detected and uses a cookie to mark whether or not to embed the malicious Java applet.
Doing domain/hosting analysis, other domains are believed to be related in the campaign not listed in the Dr. Web or F-Secure reports include:
We are seeing a number of the related websites on 67.208.74.71 (InfoRelay Online Systems).  There are a large number of interesting looking/suspicious domains that are or have have resolved here, including numerous ".rr.nu" sites.
While this has been an interesting and in some ways confusing (due to mis-information and hype) campaign to follow, we are not currently seeing an enormous number of infections. This may however be due to our enterprise customer base which tends to have a lesser Mac install base or better patch management processes. That being said though, another interesting bit of information comes from looking at Alexa data showing the list the top ".rr.nu" sites here (screenshot below):

We'll close out with statistics on the browser plugins that we are seeing among our enterprise customer base. These stats were collected by querying the browser DOM during customer-logins, which allows us to identify browser plugins/extensions.  We are currently seeing only about 6% of Enterprise systems with an out dated version of Java.  Percentages of out-dated versions of Acrobat for example are much, much higher. 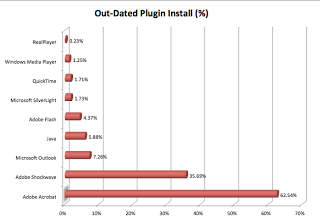