In May 2021, Zscaler ThreatLabZ observed several new domains registered by a threat actor for distribution of spoofed and malicious versions of popular VPN softwares. Threat actors have shifted their tactics, techniques, and procedures (TTPs) to target VPN users over the past year, taking advantage of the increase in remote work and the popularity of VPN applications.

Njalla has been used in the past by advanced persistent threat (APT) actors, such as Lazarus and Sandworm. ThreatLabZ closely monitors the network infrastructure used by these threat actors, which led to the discovery of this campaign.

For this blog, we performed a deep-dive technical analysis of the malicious setup files, the evasion techniques used, and the final payload delivered.

The attack starts when users visit a lookalike website registered by the threat actor to distribute VPN applications. As an example, the domain: vpnnords[.]com was registered by the attacker and used to host the webpage as shown in Figure 1. This page looks almost identical to the homepage of the legitimate NordVPN website. The only difference is that the “Download Free” button on this page leads to the download of a malicious NordVPN setup file hosted on a file-sharing website.

The complete list of domains registered by the attacker to target VPN users is included in the IOCs section.

The downloaded file looks like a legitimate setup file of NordVPN—it uses the same file icon and even displays the graphical user interface (GUI) of NordVPN—but performs malicious activities in the background, which we describe in detail in the technical analysis section.

All the domains used in this attack and registered by the threat actor have no detection on VirusTotal and all security vendors mark these domains as clean.

One such example is shown in Figure 2. 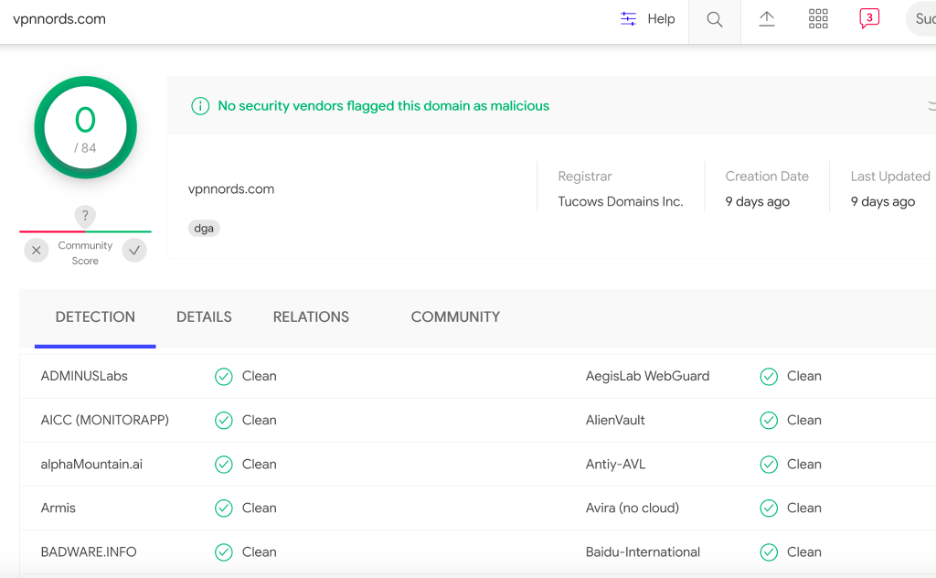 Figure 2: No detection for the malicious domain(s) on VirusTotal by security vendors

This highlights how this attack has been flying under the radar and the importance of proactive hunting techniques, which helped us discover these domains. 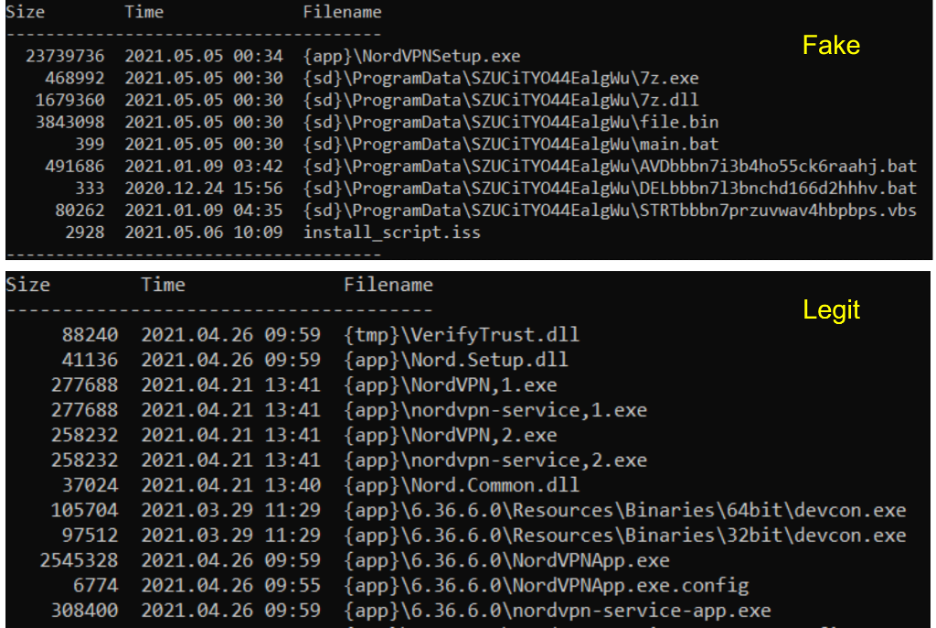 [+] Inside the fake installation package

As shown in Figure 3 above, the package contains the following files.

Note: The Inno package installer script for the fake NordVPN setup is available in the appendix section

In this section, we perform a technical analysis of the individual components packaged inside the malicious setup file.

All the script (VBS and BAT) file components in this package follow a naming convention. The first few characters indicate the purpose of the script followed by an array of random characters appended to it.

This VBScript is big in size because of the inclusion of junk instructions, which declare a lot of variables that are not used anywhere in the code.

After cleaning up, the script looks like shown in Figure 4.

The main purpose of this script is to execute the three BAT files, described in the next section. The VBScript creates a delay between the execution of each BAT script using a random delay parameter, calculated as follows.

Similar to the VBS file, this BAT file is large. This is because long strings of Base64-encoded data are included in the file and the commands are inserted between them, as shown in Figure 5. 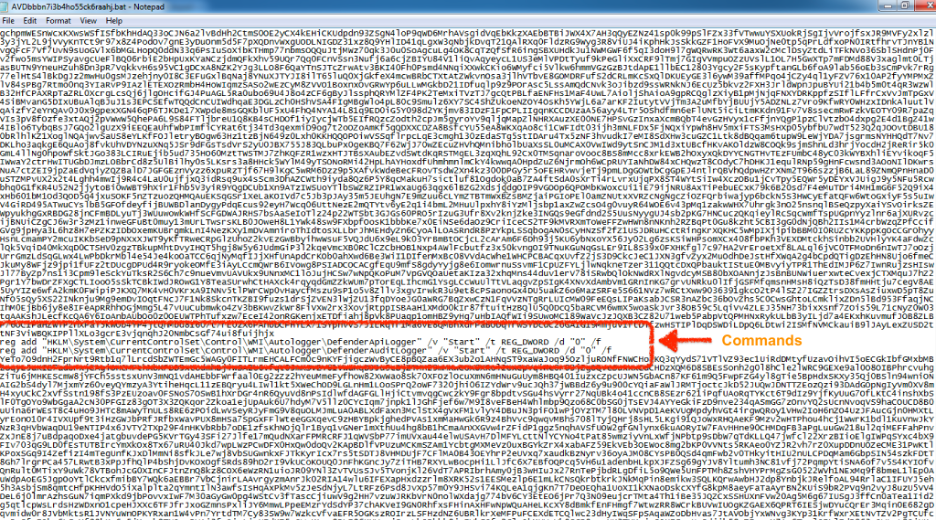 Figure 5: Commands inserted between Base64-encoded blobs in the BAT file

The complete list of commands executed by this BAT file to disable security services and features is included in Appendix.

This BAT file uses a byte order mark (BOM) in the first two bytes, in which it displays only Unicode characters when the file is opened using Notepad++ or any other text editor.

The first two bytes are {0xFF 0xFE} as shown in Figure 6.

Once we delete these two bytes, we can view the contents successfully with a text editor, such as Notepad++, as shown in Figure 7.

The main actions performed by this BAT file are:

1. Creates a temp directory called "extracted" in the current directory
2. Renames the encrypted file.bin to file.zip
3. Decrypts and extracts the contents of file.zip using the password: "___________7876pwd4897pwd19506___________"
4. Extracts all the components after decrypting and renames file.zip to file.bin
5. Executes sihost.exe

After further analysis, we discovered that an open-source anti-antivirus obfuscator was used to package the files. This obfuscator will generate a BAT file and package everything using 7zip to create an encrypted and password-protected, multilayer archive file.

This GitHub project was used by the threat actor: https://github.com/hXR16F/AntiAV

In our case, the archive file is called file.bin

Deletes all the components that were used in the initialization stage of the setup.

As per the [Run] section of the installer Inno script, the legitimate NordVPN setup is executed first, followed by the malicious VBScript execution. Operating in this order prevents the end-user from suspecting that any malicious activity is being performed on the user's machine.

Figure 8 below shows the installation window that is displayed to the end-user as a result of legitimate NordVPN setup execution, while the malicious activity is being performed in the background. 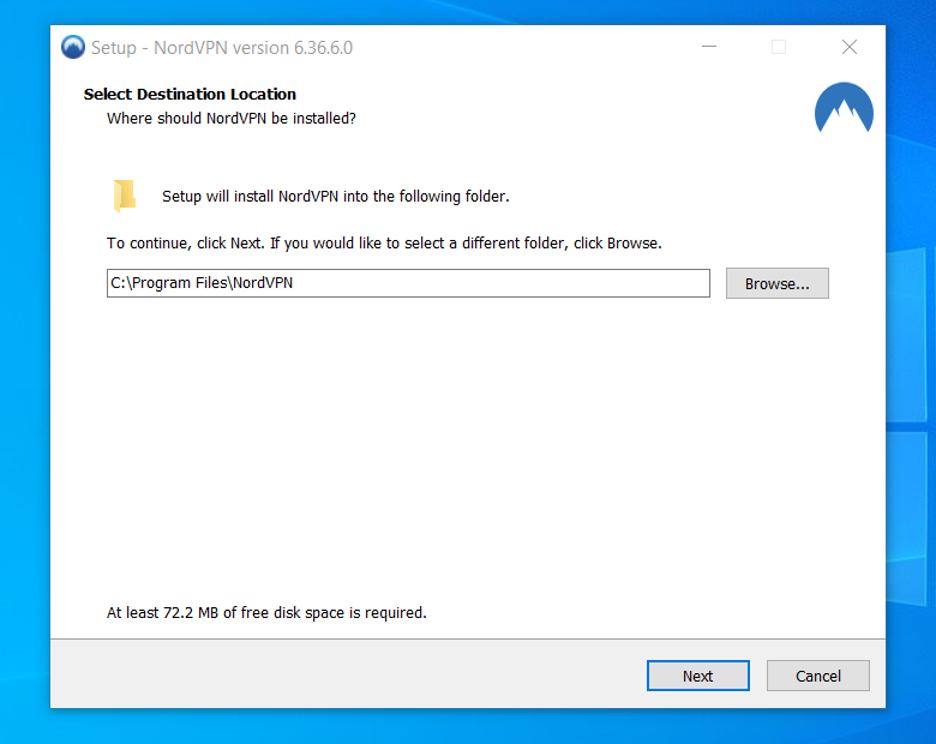 As described earlier, the VBS and BAT scripts' execution finally results in dropping and executing the .NET binary with the name, sihost.exe. Similar to all the payloads in the infection chain, the .NET binary is obfuscated and consists of multiple layers that make binary analysis difficult and help to bypass the AV products.

The main binary has the project name “StarEggControl”. On execution, it loads the next layer binary, which is stored as an image in the resource section with the full resource path “StarEggControl.frmSolucao2.image1” and it is constructed using individual pixel information from the stored image. The code responsible for binary construction is shown in Figure 9 below.

Once the binary construction is complete, the binary is loaded as a runtime module. The module is a .NET DLL with the name SampleUI.dll. Code execution is transferred to this DLL by calling SampleUI.MDI class with three parameters:

Similar to the previous layer, the SampleUI.dll also loads the next layer binary, which is stored as a bitmap image inside the resources of the main binary itself. The resource name when decoded using the parameter ugz1 is: "TwoPaths" and the full resource path is:  “StarEggControl.Resources.TwoPaths”.

The next-layer binary is constructed from the retrieved Bitmap image using a custom algorithm implementation that uses XOR operation. The XOR key is derived using the parameter ugz3 which turns out to be "YYjoq".

The constructed binary is again loaded as a runtime module, which is also a .NET DLL with the name “公jrxl的A太 wCe”. Code execution is transferred to the DLL by calling the class with the name: “公jrxl的A太 wCe.d司J物rU族家的v行是o.z官司C生bqT的A”.

Please note that the class and method names inside the .NET binary contain Unicode characters to deter the process of static analysis and reverse engineering.

Figure 10 below shows the code flow for binary construction, loading, and transfer of code execution. 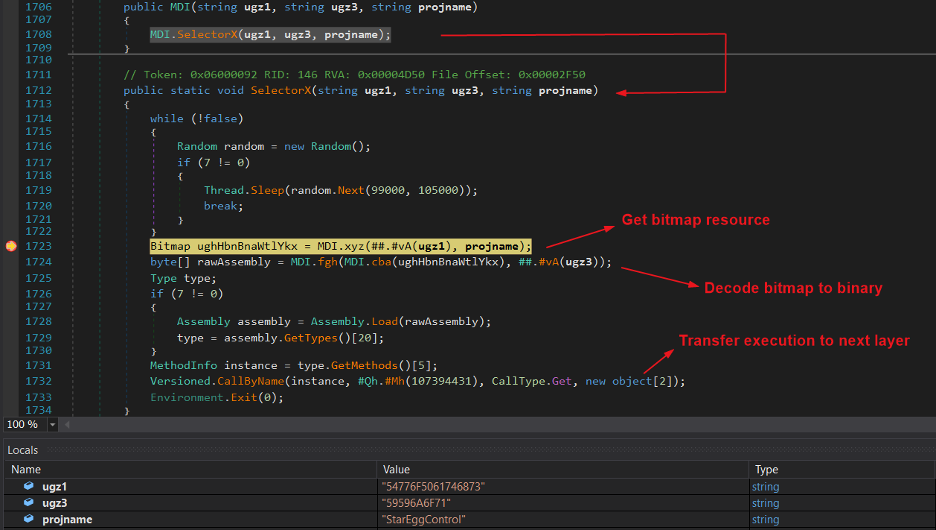 Figure 10: Decoding the bitmap to binary and transferring execution

The injected malware payload is the well-known information stealer known as Raccoon stealer.

Pivoting on the package build, we found more than 500 samples (more than 50% of these samples have less than 10 detections) and two additional themes being used to deliver malware payload—one was related to multimedia applications and the other to security softwares. We have not confirmed whether the Raccoon stealer is the final payload for all the samples, but they seem similar to the current attack. 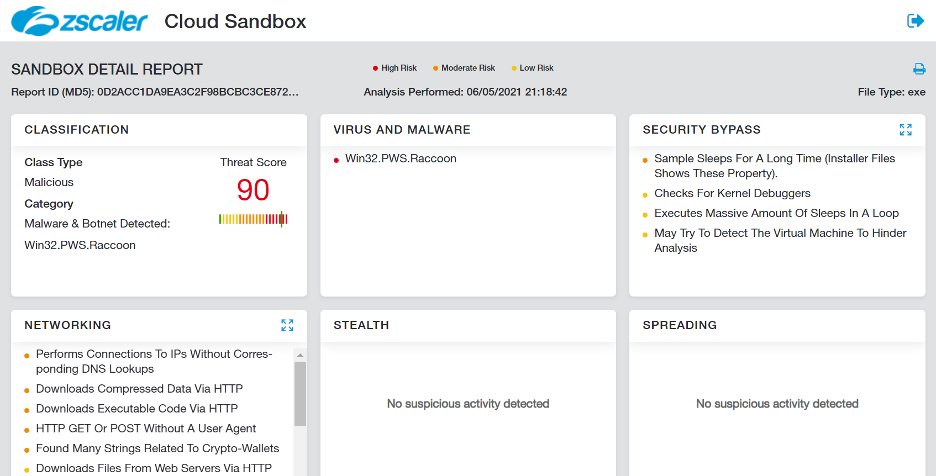 [Languages]
; These files are stubs
; To achieve better results after recompilation, use the real language files
Name: "default"; MessagesFile: "embedded\default.isl";

// Altering scheduled tasks on the machine related to security services.